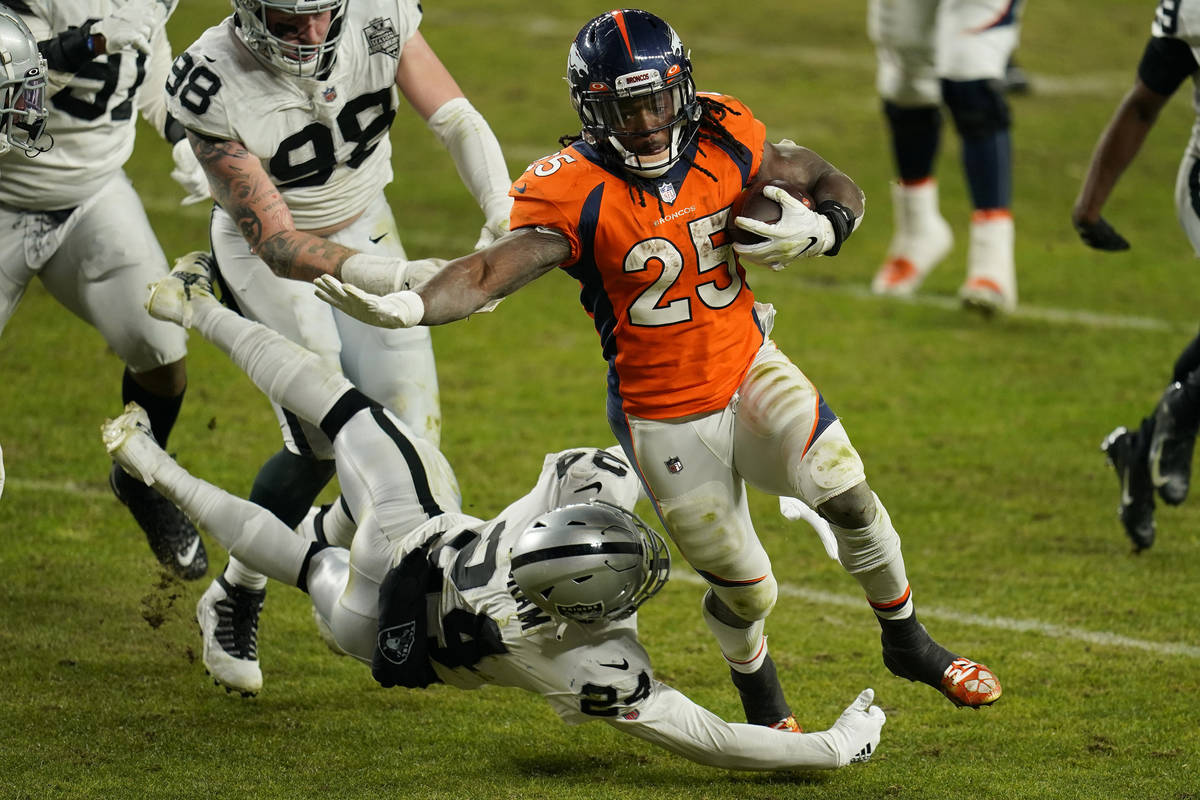 Denver Broncos running back Melvin Gordon (25) avoids a tackle by Las Vegas Raiders strong safety Johnathan Abram (24) to run it in for a touchdown during the second half of an NFL football game, Sunday, Jan. 3, 2021, in Denver. (AP Photo/Jack Dempsey) 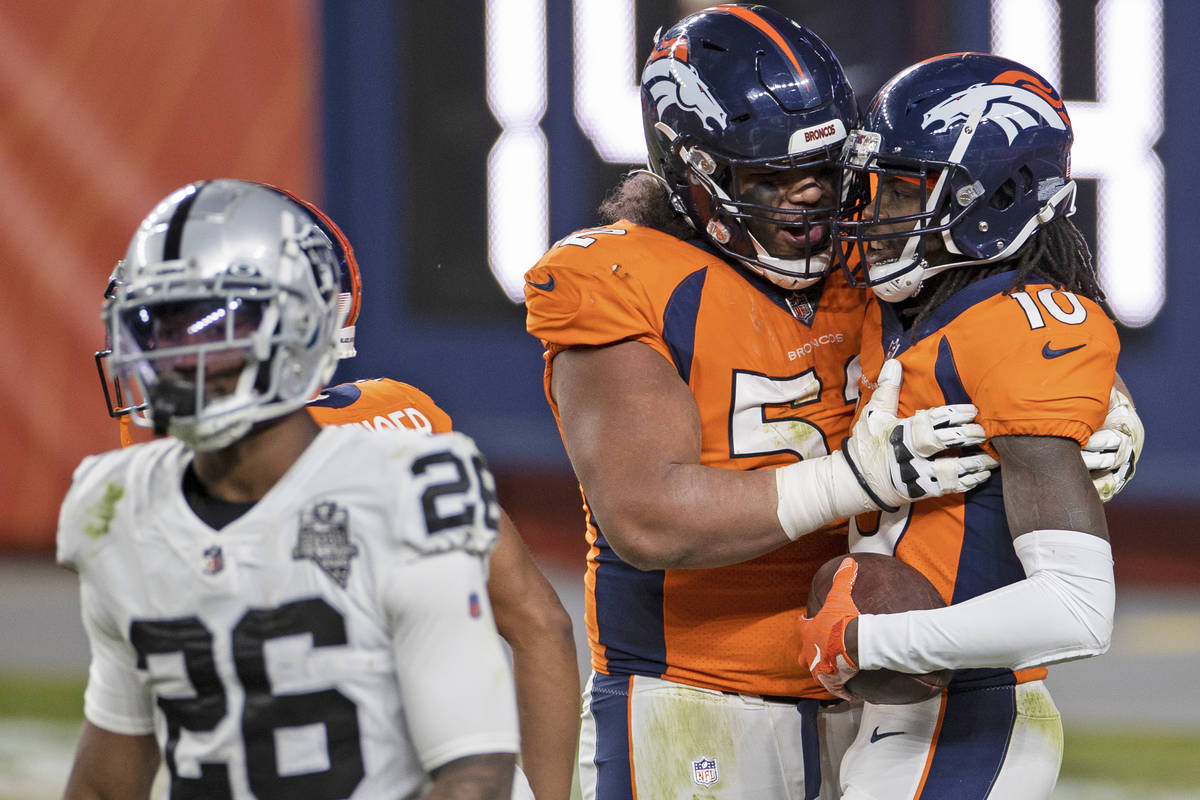 Jon Gruden mentioned getting some sleep and maybe even enjoying a cold beverage to celebrate his team’s season-ending victory. I doubt the slumber will last long. There is much work to do.

The Raiders went all last-minute dramatics in rallying to beat the Broncos 32-31 on Sunday at Empower Field at Mile High, allowing Gruden’s third team since his return as head coach to finish 8-8.

It’s a one-game improvement over last season. Yet in no way should anyone be breaking out any bubbly. The Raiders were 6-3 at one point.

They were competent on offense but not in a manner that could overcome countless defensive weaknesses. As much as folks like to praise how the Raiders moved down the field— and they did quite well for large chunks of the season — it’s also true they still lack a true No. 1 receiver and stopped running the ball with any consistency the last month or so. Turnovers were a problem.

Improvement is also needed on that side.

But any steps toward a significant movement in the win column must begin on defense, where the Raiders ranked 29th in scoring against and 24th in yards allowed.

“We definitely didn’t make it easy on ourselves,” said second-year end Maxx Crosby. “As a defense, we have to be locked in from start to finish. We have good moments and then there is a lack of focus, a lack of detail, a lack of intensity. Especially this year, playing at home in front of nobody in an empty-ass stadium. We had to find our own energy instead of getting it from a crowd, which is a lot easier.”

Defense is about aggression. Emotion. Straddling the line between discipline and chaos. Hair-on-fire and all that sort of macho stuff.

So while competing mostly in empty venues — including Allegiant Stadium for the team’s inaugural Las Vegas season — likely played a part in the Raiders needing to self-motivate, this was a bigger issue: They just weren’t good enough. Like, at all.

The Raiders didn’t get near the production they paid for from free agents like linebacker Cory Littleton and lineman Maliek Collins. There was also little pass rush, especially in the fourth quarter of one-possession games.

Recent first-round draft picks like safety Johnathan Abram (No. 27 overall in 2019) and cornerback Damon Arnette (No. 19 in 2020) seriously underperformed: Abram is ranked the league’s 91st safety out of 91 eligible names by Pro Football Focus; Arnette is 118 out of 126 at his position.

But defense is also a mindset most often instilled by he who oversees the unit. Gruden fired coordinator Paul Guenther following a loss to the Colts last month and installed line coach Rod Marinelli in an interim role. What the head coach does now is anyone’s guess.

It might be time he thought outside the building. Gruden is like most every coach in that familiarity with those around him most often guides his staffing decisions. But something needs to change.

The defensive woes are that obvious and serious. Even if it means a drastic shift in scheme or hiring someone he hasn’t a past with but comes with the desired credentials and results. This is beyond an important hire for Gruden. He can’t mess it up.

It all again became clear late in the fourth quarter Sunday when the Broncos hit on a 92-yard touchdown pass from Drew Lock to rookie Jerry Jeudy to take the lead. As Jeudy sprinted down the sideline toward the end zone, past what was again a lost and confused Raiders secondary, the need for serious defensive adjustments shone brighter than ever.

“We’re obviously sick that the (season) is over,” Gruden said. “We didn’t expect to lose to (Miami) last week. We had a chance to beat the Chargers. We had the Chiefs on Sunday Night Football late in the game. We have to improve on these things … But this team will compete every week. There is a lot to be positive about.”

The Raiders on Sunday won the final game of a season for the first time in 10 years. They have now missed the playoffs for a 17th time in 18 years.

Suggestion for Gruden: Don’t make the slumber a long one.