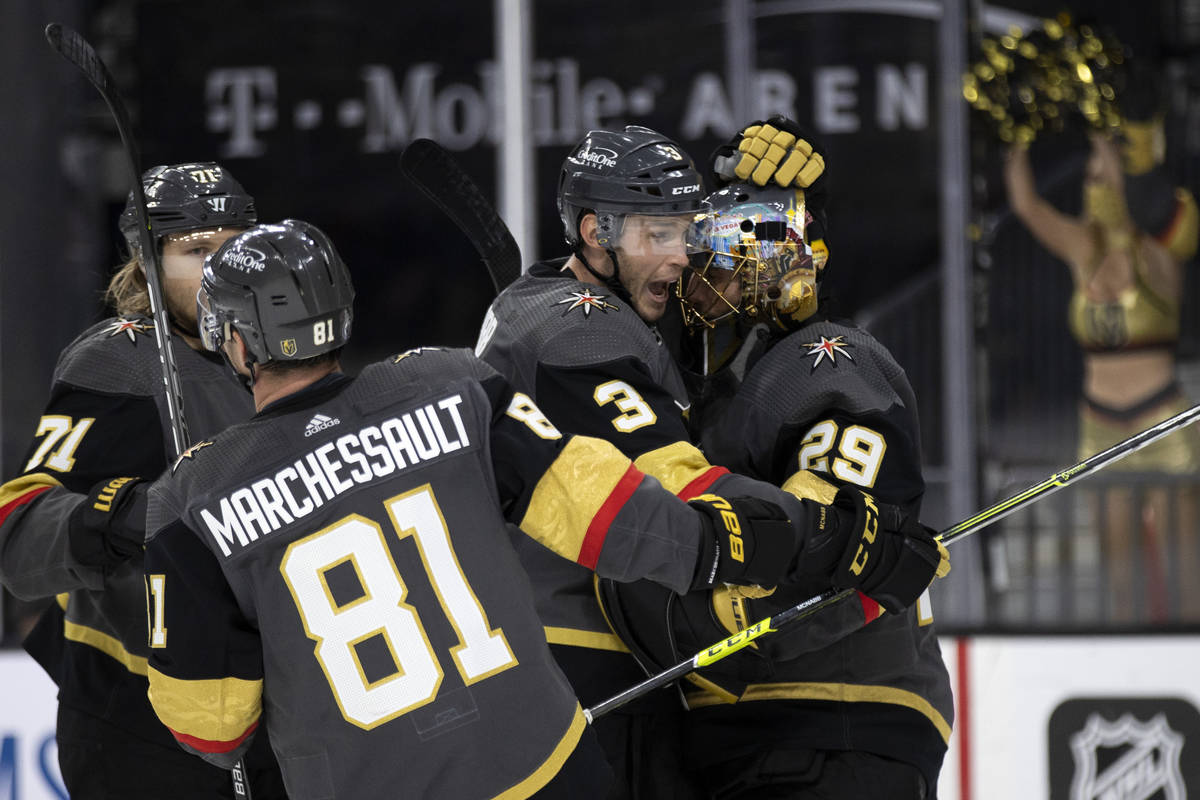 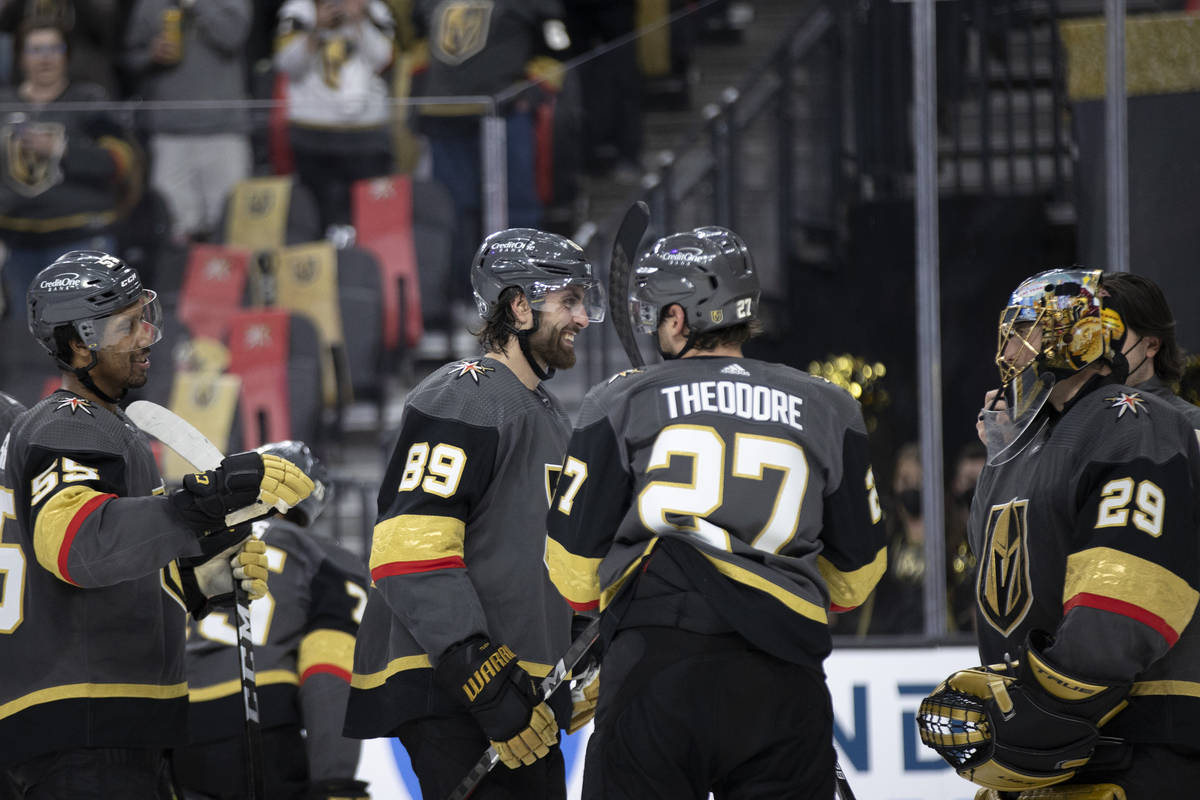 The Golden Knights celebrate their win against the Wild, including right wing Alex Tuch (89), center left, who scored two of the three goals in an NHL playoff game at T-Mobile Arena on Tuesday, May 18, 2021 in Las Vegas. (Ellen Schmidt/Las Vegas Review-Journal) @ellenschmidttt 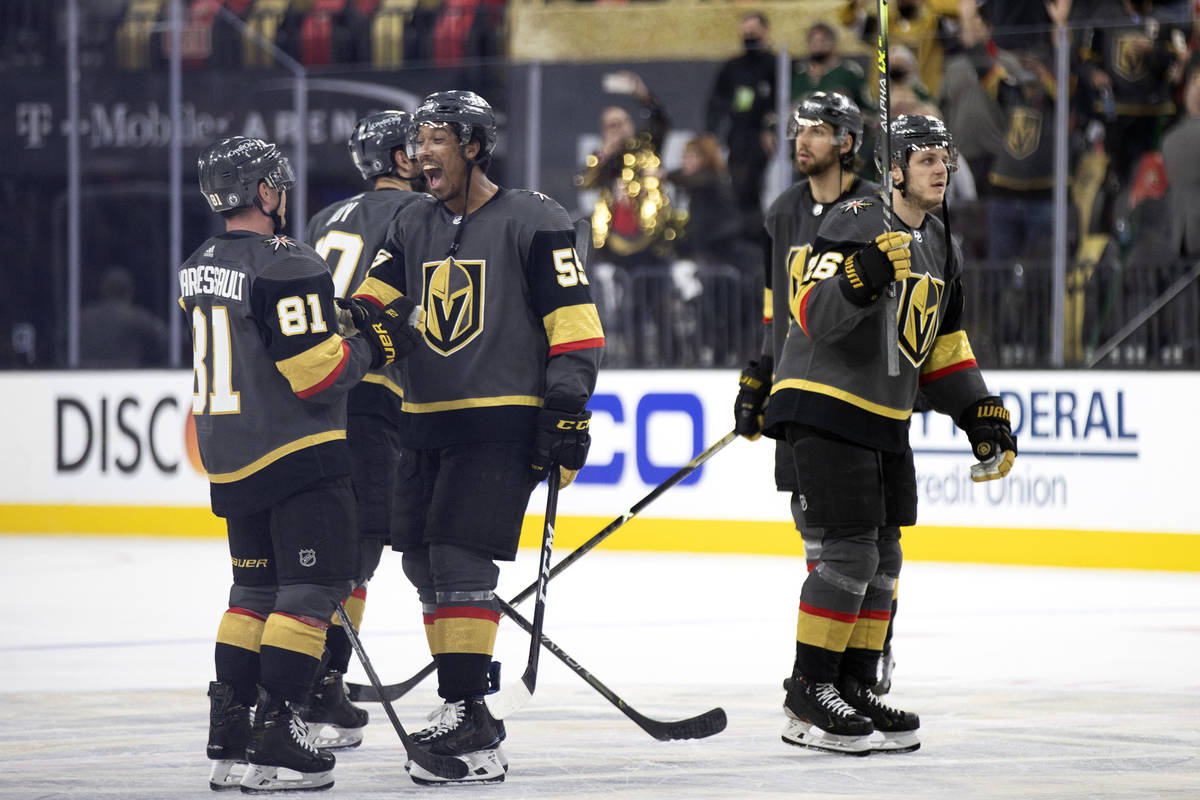 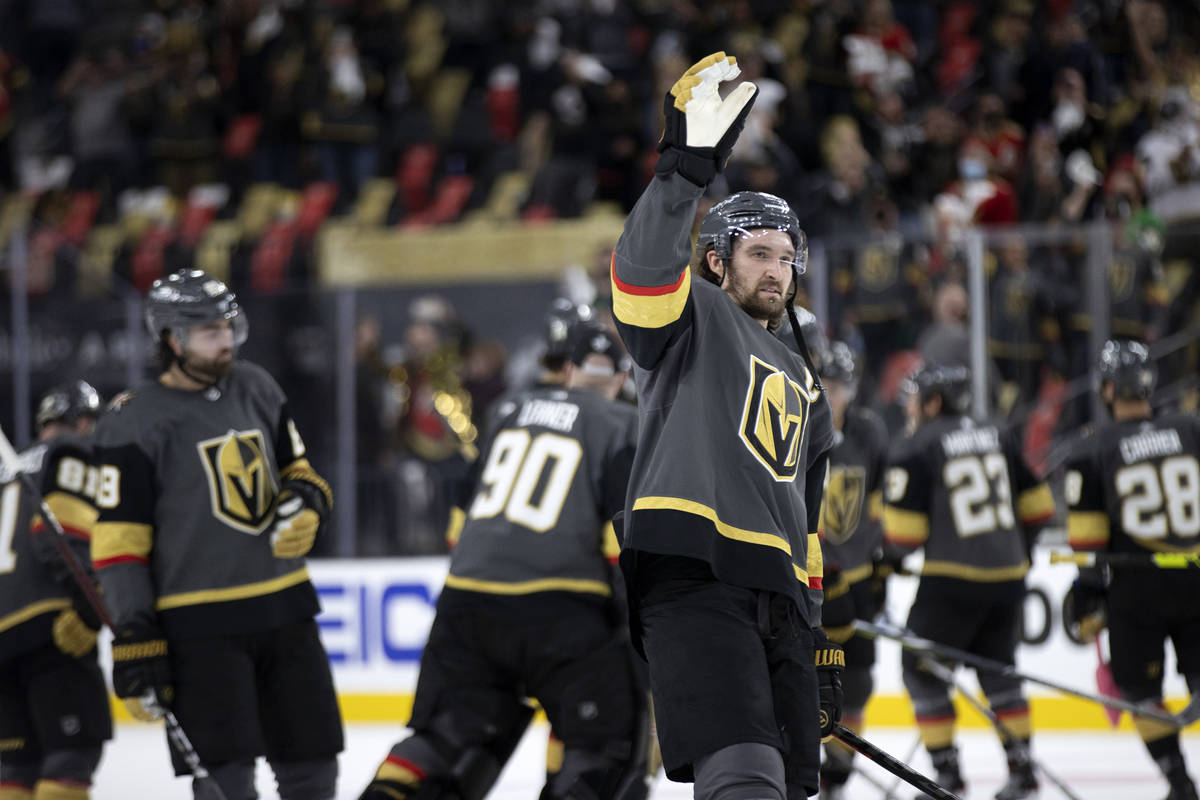 Golden Knights right wing Mark Stone (61) waves to the crowd after winning an NHL playoff game against the Wild at T-Mobile Arena on Tuesday, May 18, 2021 in Las Vegas. (Ellen Schmidt/Las Vegas Review-Journal) @ellenschmidttt

Do you know the only real time a sports team faces a must-win game?

When a loss would eliminate it from a playoff series.

Do you know what might have been a just-outside-city-limits of such a test?

When the Golden Knights faced Minnesota on Tuesday night.

Calm down. Don’t go hiding under any covers and calling in sick to work. The Knights were able to even their best-of-seven divisional series against the team they have all sorts of trouble with by beating the Wild 3-1 at T-Mobile Arena.

Things are now a game apiece as the drama shifts to Minnesota for Games 3 and 4 on Thursday and Saturday.

And there will be plenty of it. This thing is just getting started.

The postseason offense that has been lacking for some time was discovered over the final 40 minutes — at least a little of it — when two of three goals came via the stick of Alex Tuch.

He was elevated by coach Pete DeBoer to join a top line with Chandler Stephenson and Mark Stone. Things just work sometimes. They needed to Tuesday, even with another this-is-why-he’s-in-net effort from goalie Marc-Andre Fleury.

He stopped all but one of 35 shots. There is supremely dialed in and then there is Fleury right now. He kept the Knights in it early and Tuch finished things off late.

Weird. You almost wondered which team was down in the series after a period had been contested. It was again 0-0 but the script had been flipped from Sunday. Minnesota was the aggressor.

Jonathan Marchessault had said earlier Tuesday — and thank goodness he did only to remind us he’s by far the most genuine and up front Knights player when it comes to addressing media — that it was imperative his team earned a lead following 20 minutes and play from ahead.

Do that and it’s far tougher for Minnesota to be so structured defensively. To be such pests. The best thing going when playing the Wild is to make them cheat to chase offense.

But it didn’t happen exactly the way Marchessault had hoped, Minnesota outshooting the Knights 17-10 and holding a 6-3 edge in high danger chances after one.

How ironic, then, that it was Marchessault who finally ignited some life into the Knights.

His second-period goal 18 seconds after the Wild had grabbed a 1-0 lead brought an ear-piercing eruption to T-Mobile not felt since those pre-pandemic days that now seem eons ago.

“I sensed we were a different group after that goal,” DeBoer said. “Once we got that one, it was almost like a little weight off our shoulders. We started to play.”

It’s true that the 8,600-plus in attendance the past few games has felt and sounded much louder. It has looked as if far more bodies are in the building.

Take away boxing Hall of Famer Oscar De La Hoya straining to ring the arena siren at the game’s outset — the poor kid appeared as if he had thrown far too many plates on the bench press bar — and the Knights fed off their home crowd like it was, well, before the world changed.

“The place was rocking,” Marchessault said. “It’s what we expect in the playoffs. We’re not done here yet.”

It’s off to the state with all those lakes and museums and parks and skyways, to what has been a dwelling of doom for the Knights at Xcel Energy Center. They have never posted a win in regulation there.

It’s not a trend that can continue for the Knights if the series is to ultimately fall in their favor. I’m guessing none of that Minnesota hospitality will be awaiting the visitors.

They can’t allow for history to repeat itself.

This, then, is the Knights’ challenge: Write their own.