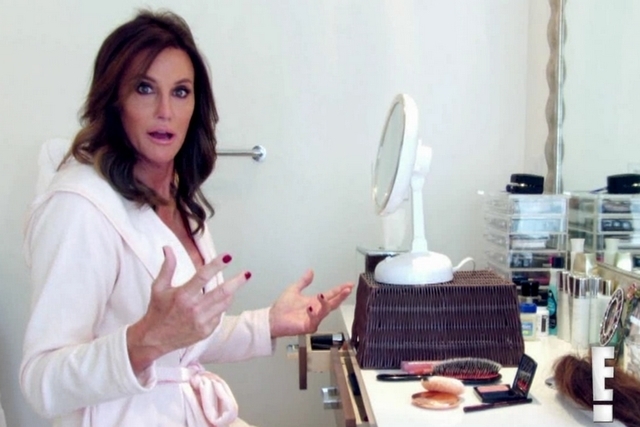 Caitlyn Jenner will star in “I Am Cait,” which will premiere July 26 on the E! network. (Screengrab/E! Network)

He wrote the words in a letter to his wife in 1975, those about learning that courage was not the absence of fear, but the triumph over it.

I’m not sure we can do much better than Nelson Mandela when it comes to promoting a sense of bravery.

I’m also not sure courage is a trait that should be interpreted in a singular way.

The ESPYs annually recognize individual team and athletic achievements during a calendar year, an awards show presented by ESPN that began in 1993.

Its ratings were up 13 percent in 2014 from the previous year, and yet still only posted a 2.1 overnight.

Which means in the big picture of a nation full of TV sets, few tune in, making the ESPYs a mere bug on the windshield of what most Americans believe is worth viewing on whatever night the show annually lands.

But it seems everyone has an opinion about it today, because Caitlyn Jenner has moved a needle that until now existed in somewhat of a dormant state.

ESPN will present the Arthur Ashe Courage Award next month to the female identity of former Olympic decathlon champion Bruce Jenner, saying that the selection is because of “courage and for giving comfort to those facing similar circumstances as well as for educating people about the transgender community.”

The firestorm of praise and criticism, as you can imagine, was rampant.

Social media exploded over the issue.

I’ve always thought courage a proportionate term to how each individual defines it. It shouldn’t be viewed in a vacuum. What one might deem a valiant act others might see as insignificant. Atticus Finch had the right idea, that you never really know a person until you climb into his skin and walk around in it.

Billy Jean King is a past recipient of the Ashe Award. So is Michael Sam and Robin Roberts and Pat Summitt and Muhammad Ali.

So was Mandela, four years before his death.

What, now we care about the ESPYs, much like making public the corrupt ways of FIFA caused millions of Americans to suddenly worry about a sport they never gave a second thought?

This just in: The United States now polices soccer, which is preposterously ironic on countless levels.

The chances most who blasted ESPN for its choice of Jenner could tell you five previous Ashe winners without hints or reading a few paragraphs above this one compare to those of Kim Kardashian missing a camera on the red carpet.

Is Jenner in her quest to help thousands of embattled transgenders more courageous than Lauren Hill, the Mount St. Joseph basketball player who lost her fight to brain cancer in April but who impacted millions of people around the world before her death? Is Jenner more courageous than wounded Army veteran and CrossFit competitor Noah Galloway, who lost his left arm above the elbow and left leg above the knee during the Iraq War but who now runs marathons and competes in Spartan death races?

Is she more courageous than those parents who must face life after the death of their young child? Or those who fight and conquer the demons of drugs and alcohol addiction? Or those who battle depression and mental illness?

It’s a fluid debate, one in which some believe Jenner is every bit as courageous, while others have argued there is no comparison to the trials and pain and hardships those such as Hill and Galloway experienced.

I suppose the only thing to hope for is that ESPN was in no way nefarious in its choice based on the celebrity and potential ratings it might bring the event, given it is expected the entire Jenner/Kardashian clan will be onstage July 15.

Bob Costas suggested as much Tuesday, when the broadcaster said he believed ESPN’s selection of Jenner is a “crass exploitation play, a tabloid play.”

“I think this is just a play to pump up audience the way lots of things are put on television to attract eyeballs,” Costas said on “The Dan Patrick Show.” “It’s not because of the validity, but because of whatever the kind of gawker factor is.”

To that end, perhaps the real issue most should be upset about is how in the world our society is so screwed up that we created the social phenomenon that is the Kardashians, that their wealth and fame (for nothing more than being famous) is a direct result of our twisted infatuation with celebrity culture.

Now there is something people should question.

Hill had died and Galloway’s story had been told several times across national media outlets (he appeared on “Dancing With the Stars”) before Jenner told Diane Sawyer of ABC that he no longer considered himself male.

Is it possible by then ESPN hadn’t yet considered the most worthy candidates for the Ashe award?

But that neither was chosen doesn’t in any way diminish the courage Hill and Galloway exhibited. Nor does it mean Jenner’s selection is wrong.

Courage is an impossible trait to quantify and shouldn’t be interpreted in a singular way.

David once reached into his bag, took out a stone and slung it. That was pretty courageous.

I’m guessing, in the instant before being struck in the forehead, that Philistine fellow disagreed.

Las Vegas Review-Journal sports columnist Ed Graney can be reached at egraney@reviewjournal.com or 702-383-4618. He can be a heard on “Seat and Ed” on KRLV 1340 from 2 p.m. to 4 p.m. Monday through Friday. Follow him on Twitter: @edgraney.