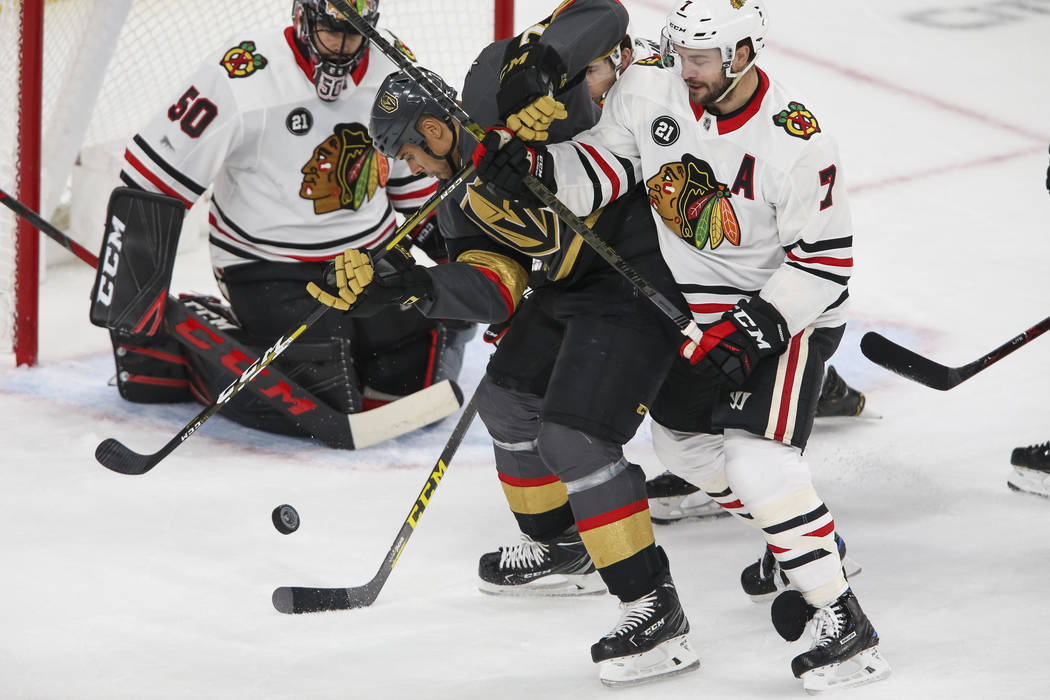 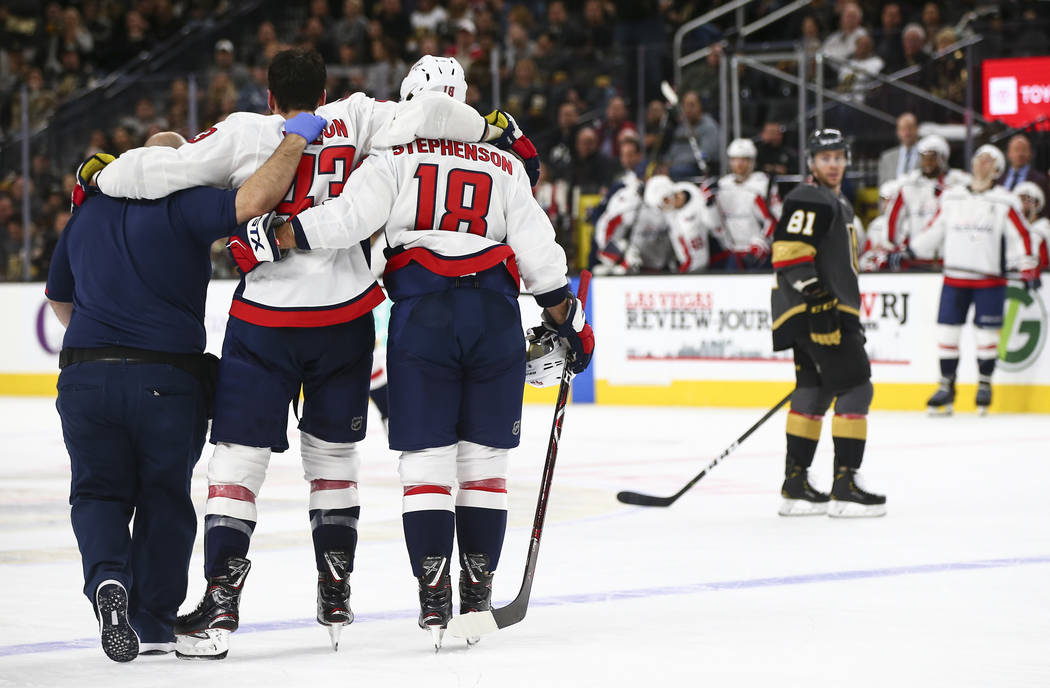 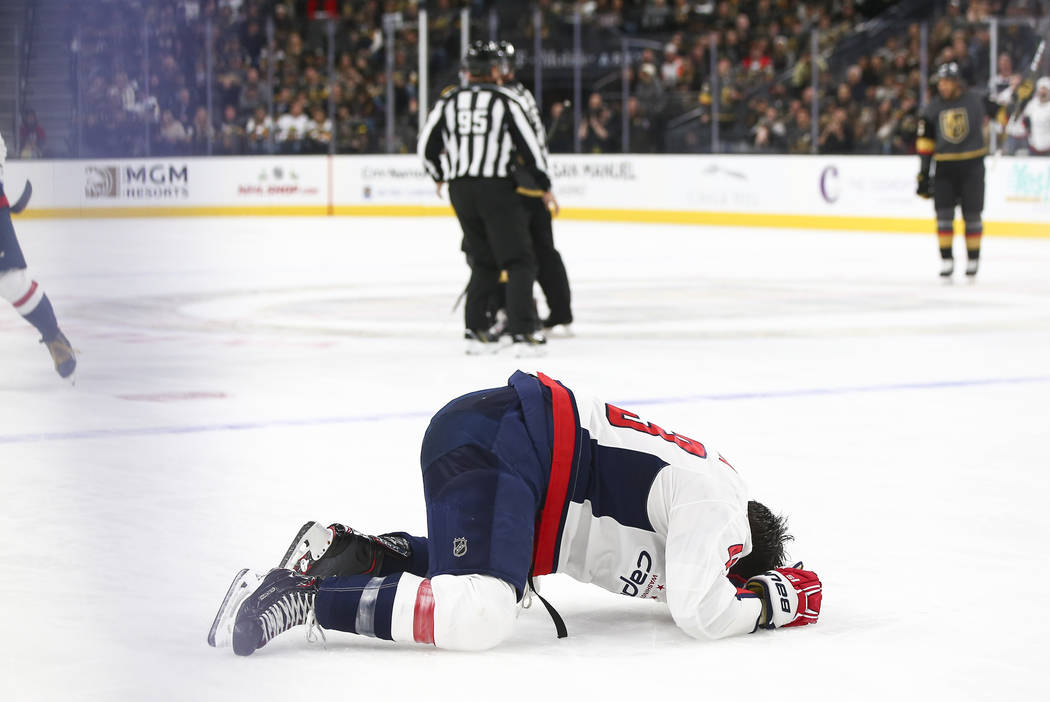 Lessons are often learned over time, even for really big kids.

It’s certainly true for Ryan Reaves, which is to say the Golden Knights forward pulled a small-time expansion move Thursday, even with his team more than a year removed from such a distinction.

Not with anything on the ice, where the Knights beat Chicago 4-3 before an announced crowd of 18,494 at T-Mobile Arena, having outscored the Blackhawks 12-6 in two victories this season.

The Knights are rolling, all right, having won eight of 10.

But karma moves in different directions, and when actions are foolish in nature, well, the resulting backlash of negativity is deserved and earned.

You remember the hit that Reaves made against Tom Wilson of the Washington Capitals on Tuesday? The one that drew a five-minute major and game misconduct for Reaves?

The one that knocked Wilson out of the game and had him miss Washington’s 4-2 victory at Arizona on Thursday with a concussion?

The NHL didn’t deem it bad enough for Reaves to be assessed any supplementary discipline, and he shouldn’t have been. The hit was absolutely late, but even if Reaves had, as Washington coach Todd Reirden said afterward, targeted Wilson the entire game, officials were left to call just the actual hit.

It should have ended there, or at least until the teams meet again, which I’m sure both would openly welcome this season given it would mean a rematch of the Stanley Cup Final.

But it didn’t, and this is where things went wrong.

Whether it be via an agent or a player himself, a big part of professional sports in 2018 is marketing one’s brand. One’s appeal. One’s ability to increase popularity.

This particular move to enhance all of the above, however, was a total failure.

It was midday when a Las Vegas-based memorabilia dealer named Inscriptagraphs began promoting across social media 16-by-20-inch copies of a photograph that showed Wilson dazed on the ice as Reaves was being directed away by a linesman.

On each picture was a quote that Reaves gave reporters after the 5-3 win: “He ran into a lion in the jungle.”

Which was a bad way to begin things, given there are no lions in the jungle.

Each picture was signed by Reaves, a point Inscriptagraphs made in its Instagram post about the item when pushing it as a “must have Christmas gift.”

“The picture was probably in bad taste,” Reaves said after the Knights’ victory Thursday. “I apologize that it even got started.”

Here’s the thing: To offer even the mere insinuation one might profit from a picture of an opposing player lying on the ice with an apparent head injury is ridiculous, given the public emphasis the league has put on player safety.

And whether such reality exists somewhere between denial or acceptance on behalf of the NHL when it comes to head trauma, you shouldn’t as Reaves support even the slightest appearance of having fun with this specific issue.

I don’t care how dirty a player the majority of folks believe Wilson is or how far the dislike between he and Reaves goes, and it’s apparently fairly deep.

You don’t get involved with promoting such a message.

The immediate public reaction was so critical that Inscriptagraphs removed the picture from all its social media accounts, although it’s fairly obvious there is a healthy connection between agents and the company given the countless autographed items for sale — hey, you can have your very own Marc-Andre Fleury-signed framed sweater for just $1,399!

Or how about a stocking stuffer of a William Karlsson-signed puck for $199?

“(The Reaves photos) were not distributed, and they have been destroyed,” Knights spokesman Eric Tosi said.

Smart move. Domestic violence is unquestionably the biggest hot topic issue in sports, but head injuries remain near the top of such a list.

Reaves also plays a role where he can be as much stalked as stalker during games. It’s just not a road he wants to travel. You know, that karma thing and all.

“I’ve signed a lot worse, but in this age of social media and concussions, and the fact (Wilson) was hurt, you never want to see that,” Reaves said. “I called the guy (at Inscriptagraphs) right away, and we took care of it before it got out.”

Maybe he can send Wilson a pair of signed VGK socks for Christmas.