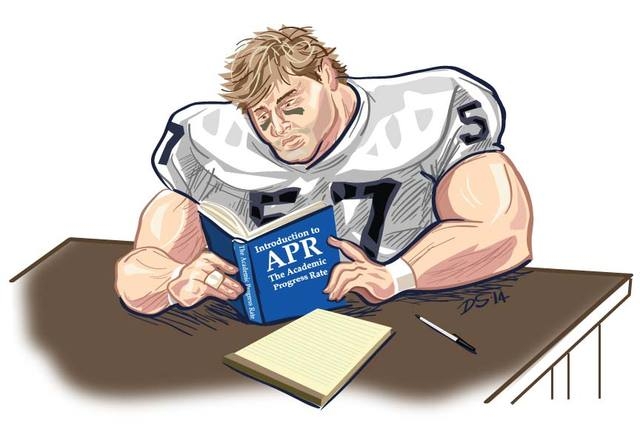 (David Stroud/Special to the Review-Journal)

There is this myth about the apparent simplicity of the Academic Progress Rate, the measure by which the NCAA tracks eligibility and retention rates of student-athletes.

It isn’t as straightforward a system as some would believe.

It’s really like most things in life: Money might be the root of all evil, but it sure does benefit those with the fattest wallets.

UNLV’s football program discovered firsthand how inflexible APR guidelines are, meaning those teams that don’t meet the required average score over a four-year period will be subject to certain sanctions.

In the Rebels’ case, that means a postseason ban in 2014 and replacing weekly hours of practice time with more for academics.

It all seems so nice and tidy.

But the APR is not without loopholes, a truth that has led many universities to travel away from the NCAA’s hope of using the tool to improve an athlete’s chance of graduation to another, less respectable goal:

“There is a lot of that going on across the country,” UNLV football coach Bobby Hauck said. “The (APR) is a flawed formula.”

It was in August of 2012 when two college professors with varying experience in intercollegiate athletics — Gerald Gurney of Oklahoma and Richard Southall of North Carolina — succinctly listed in an ESPN.com article the ways by which schools manipulate the APR through allowable tactics.

The ways in which they keep kids eligible.

There was a common theme throughout: Those universities with the most resources — read: dollars — had a better chance than others of bolstering APRs and avoiding penalties.

Consider: It takes money to employ a squadron of compliance officers who expertly file waivers for student-athletes who can demonstrate a learning disability and often aren’t held to eligibility standards. A school like Southern California might have 11 such staffers able to assist in drafting such waivers and other petitions that avoid APR hits.

UNLV lists four people in its compliance office and one is a graduate assistant.

“There is always a dollars-and-cents issue and we always have to deal with fiscal constraints,” UNLV president Don Snyder said. “Finding the best way to use the resources we have to accomplish what we need to and reach and achieve the metric we need to is leadership’s job. We need to prioritize our resources and make sure we focus on measuring our progress. I’m a big believer in accountability. Whatever the metric is forces us to be able to deliver.”

There is also the use of summer school to aid in APR improvement, where athletes who have failed to meet academic standards can bolster their grade-point average. But it’s an incredibly expensive venture, and football budgets that lost $4.5 million in the fiscal year 2013 (see UNLV) often find it difficult to raise money for summer classes.

I’m guessing Alabama and Ohio State and Notre Dame and countless others discover a way.

Some schools find classes for their athletes with “friendly” professors; there are academic concessions made for family illnesses; there are more and more online courses offered, where a student’s work (translation: who is really doing it?) becomes much harder to track; there have been documented classes that don’t require any tests to be taken or papers to be written.

“Historically, if you look at some schools and what they have done with (APR) numbers, it appears very clear that they don’t want to lose the millions of dollars that come with big-time college football and are making sure their student-athletes are eligible,” UNLV athletic director Tina Kunzer-Murphy said. “Fortunately for us, our student-athletes have real majors. They go to class. We don’t have the sorts of classes that some others might to keep kids eligible. Should that be a concern (of the NCAA) if that’s happening at places? Absolutely.”

In their piece for ESPN.com, Gurney and Southall state that while the NCAA may express concern, “it has yet to publicly address common methods schools that have the financial wherewithal use to raise their team APR scores.”

UNLV isn’t such a place, having suffered major budget cuts across campus that eliminated dozens of educational programs and positions that could have directly influenced the APR score in football for the better.

It’s not an excuse for the postseason ban — other schools in similar financial straits annually make their APR numbers — but rather a reality that often separates those institutions able to support ways to better control APR scores and those who can’t.

It is perhaps why Connecticut’s basketball team can suffer a postseason ban for having a four-year APR average of 889 and return in 2014 to win the national championship with a single-season APR score from the previous academic year of a perfect 1,000; it might explain how Kentucky basketball and it’s annual parade of one-and-done players offer APR numbers above the national average and tops in the Southeastern Conference.

Translation: There is far more to the APR and how some schools reach numbers and others don’t than merely a certain percentage of student-athletes falling out of academic favor and not earning their degree.

It’s about money as much as it is graduation rates, about savvy administrators as it is dedicated students.

The loopholes are obvious. What was once a well-intentioned vehicle to ensure an environment was created for student-athletes to be held accountable academically and better prepared for life after college has become more about avoiding penalties that could shatter a school’s bottom line.

The APR has, in essence, created a new major at those colleges with the funds to support it.