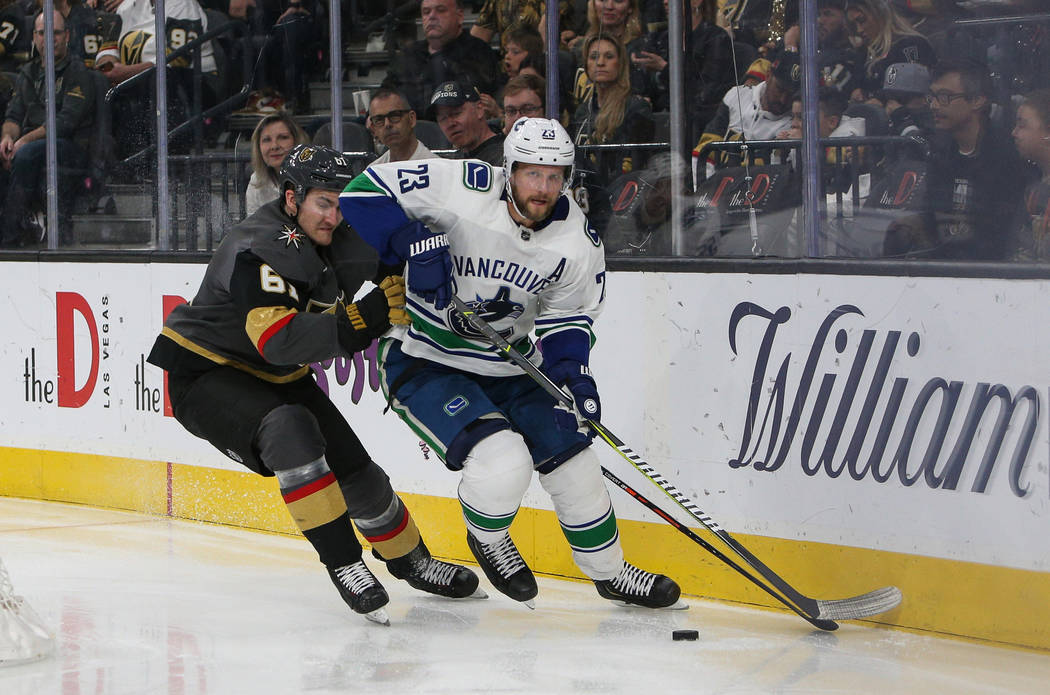 “It reminds me a lot of (Nate Schmidt’s) situation. When we missed him, it put people in places that they weren’t comfortable. It’s important to have a role on your team and feel comfortable and confident in that role.

“I think Stone coming in and giving us that balance throughout our lineup, I see a lot of similarities in our forwards now compared to when (Schmidt) came back from his (20-game suspension). It’s not one player that makes a huge difference. I think it’s one player that puts everyone in a position to succeed with a role that they’re comfortable in.”

Max Pacioretty had been asked about the Golden Knights since trading for Mark Stone.

Impact isn’t always defined exclusively by producing points, and that which Stone has made since arriving from Ottawa at the trade deadline reaches far beyond it, the Knights having won four straight with him following a 3-0 blanking of Vancouver on Sunday afternoon at T-Mobile Arena.

I don’t want to suggest it was total domination on part of the Knights, but I’m fairly certain the announced crowd of 18,303 gave Vancouver a third-period standing ovation for … successfully moving the puck past the red line.

The visitors were credited with five shots in the third.

Vancouver had zero over a 14:30 stretch of the period.

If there is another level for the Knights to reach than coming off consecutive shutouts of Anaheim and the Canucks, you would then be discussing one that had them reach a Stanley Cup Final last year. They have looked that good the past several days, blitzing the types of teams they should.

Stone has played to a plus-4 since the trade and while his lone point is an assist, his influence along the second line and, really, the entire lineup has been seamless.

The Knights have outscored the four opponents 15-6 while the second line of Stone, Pacioretty and Paul Stastny haven’t been on the ice for any of the six allowed.

“First of all, Stone is more of a guy that when he gets in the neutral zone, he’s often looking to make a play rather than chip it and get it himself,” said Pacioretty, who scored his 21st goal of the season off one of 48 shots by the Knights. “That often leads to us entering the zone with possession and that’s something that’s really unique in a player. You don’t see it often. You really have to have a good brain for the game and a good skill set to do so.”

Stone reminds me of the kid in eighth grade whose instincts in basketball are so much better than most around him, many of his passes result in turnovers, the kid everyone tells those same plays will end in layups and dunks when he reaches higher levels.

He’s terrific on the boards, allowing Pacioretty and Stastny to take more chances. Stone also leads the league in takeaways at 95 and while such stick skills don’t always result in goals — see the the two breakaways he sprung Pacioretty for at Anaheim — opportunities continue to be presented for those around him.

Over four games with Stone, the second line has 16 high danger chances while allowing just six.

Reilly Smith has three goals in the last three games. Shea Theodore has been terrific since being switched to the right side on defense. Marc-Andre Fleury, currently on the longest scoreless streak of his career, continues to add to the city’s caloric intake with all these free donuts given away for his shutouts.

And the guy they traded for at the deadline is making an impact far beyond points.

“Stone obviously helps on the ice because he’s an unbelievable player,” Pacioretty said. “I think it allows us to have this depth that genuinely makes us a four-line team. And with Mark, we’re able to really roll four lines and that keeps our legs fresh and makes sure we have a lot of energy on each shift.”

It’s a good time to be rolling those four lines.