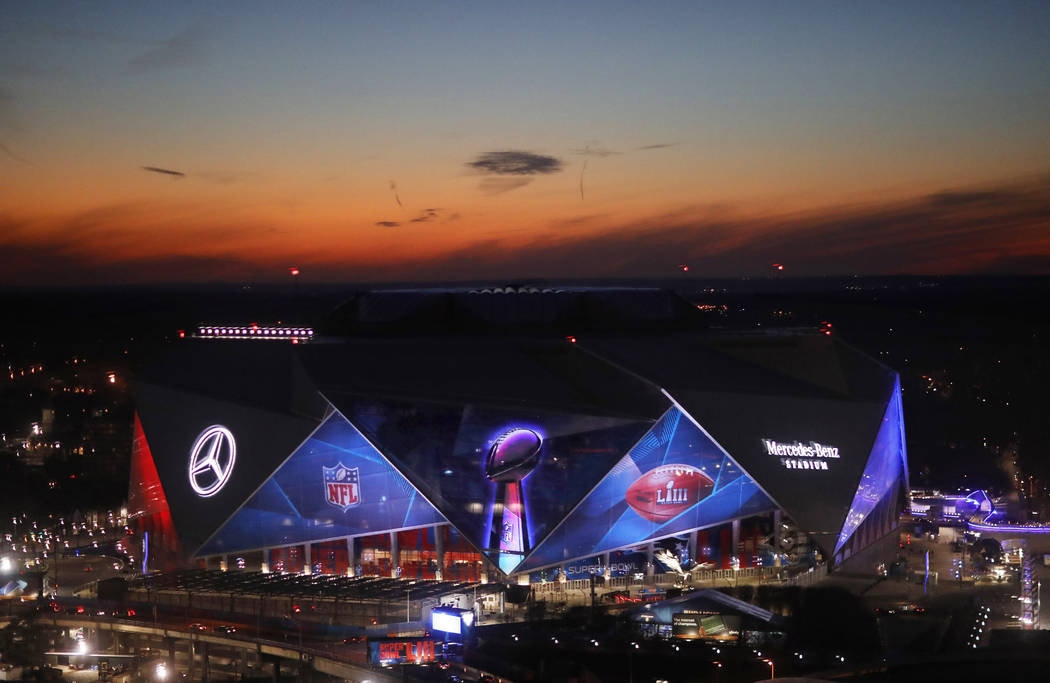 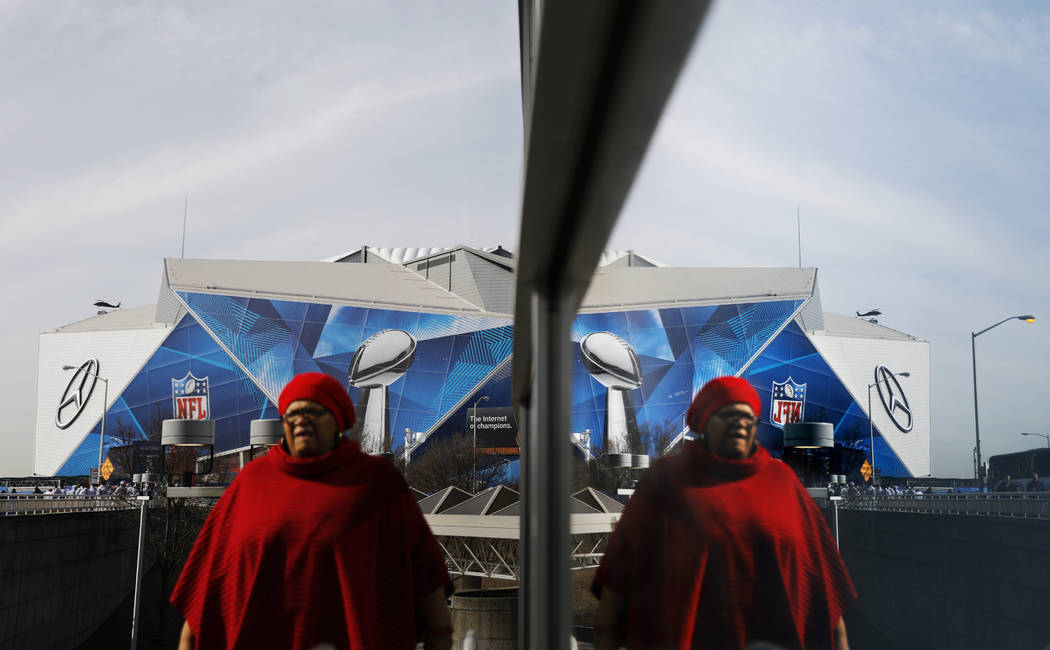 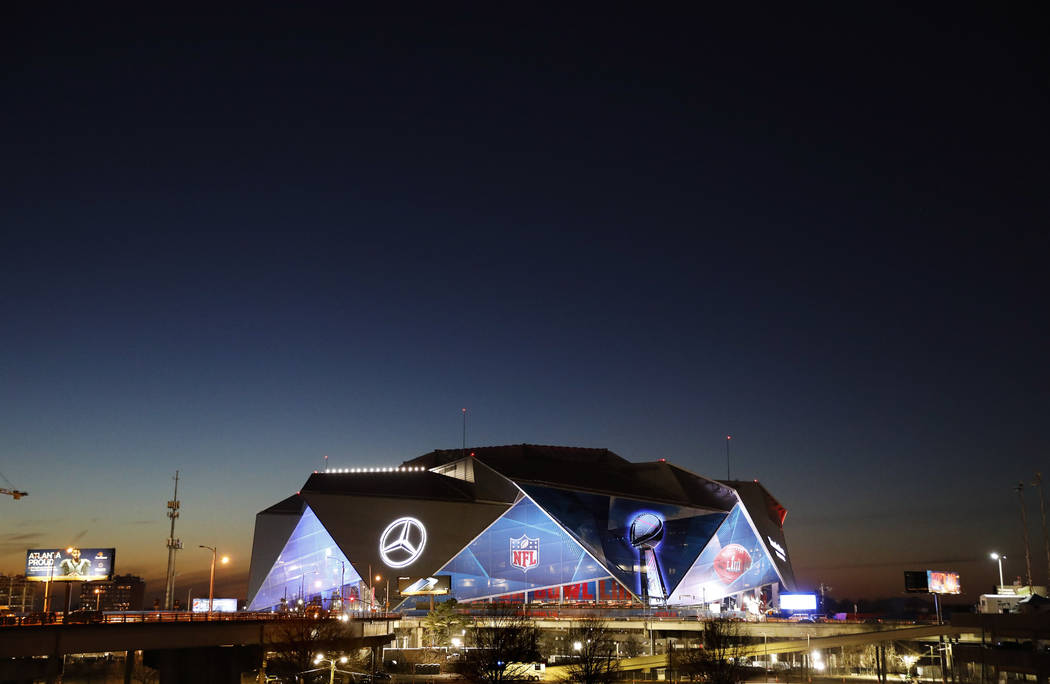 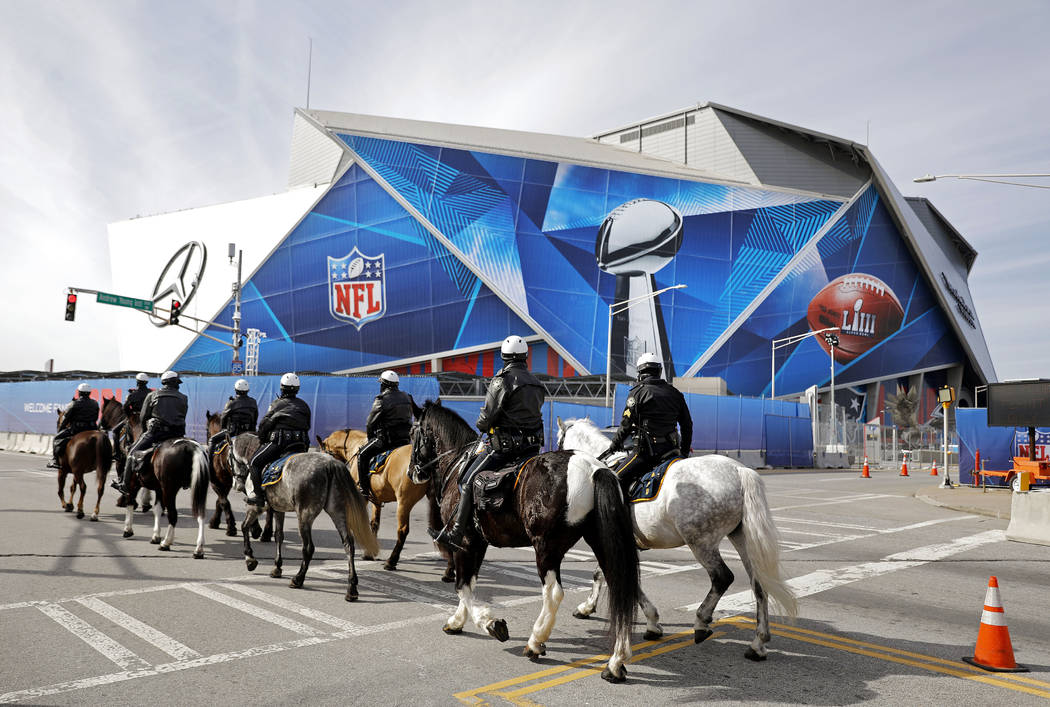 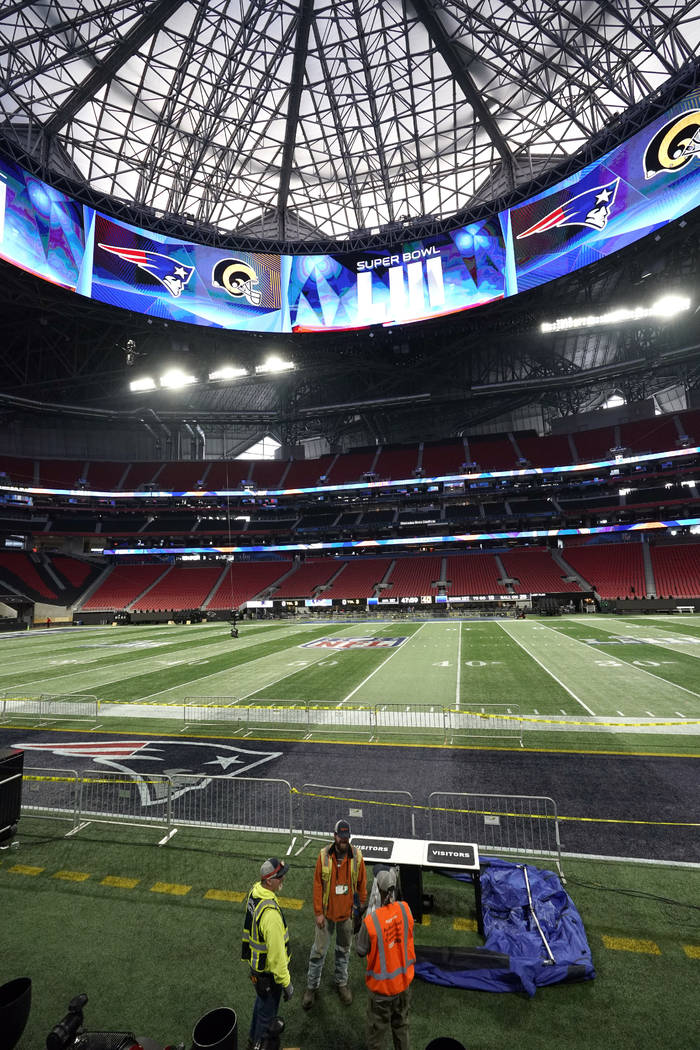 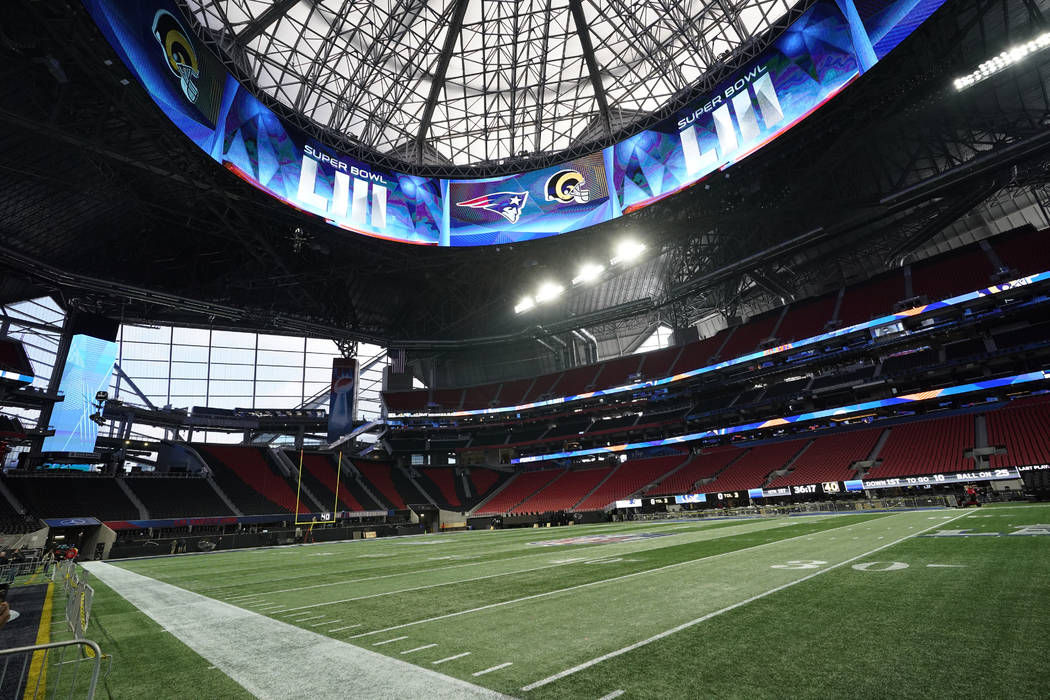 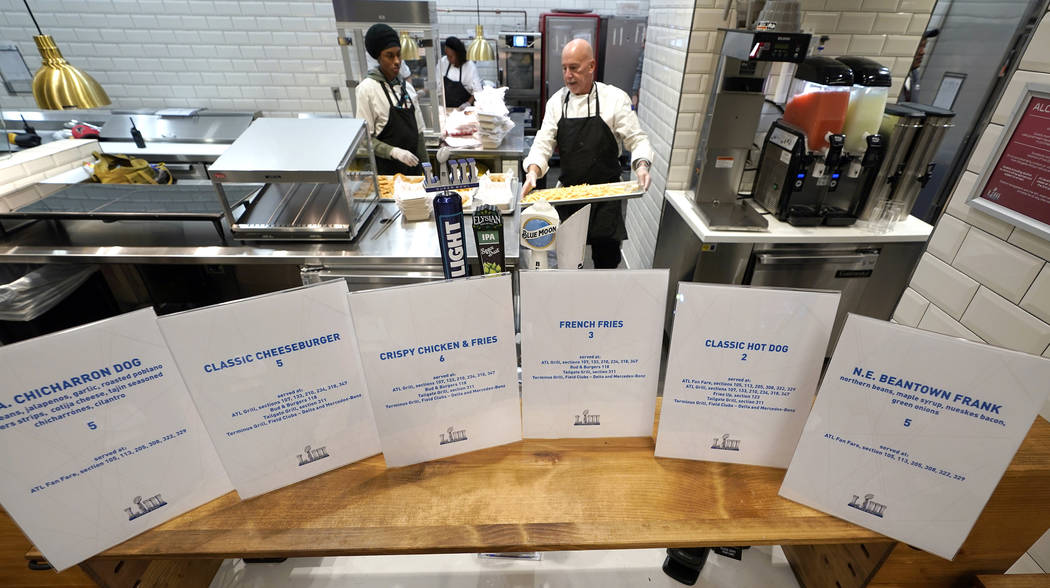 Food is prepared for a media tasting event during a tour of Mercedes-Benz Stadium for the NFL Super Bowl 53 football game Tuesday, Jan. 29, 2019, in Atlanta. (AP Photo/David J. Phillip) 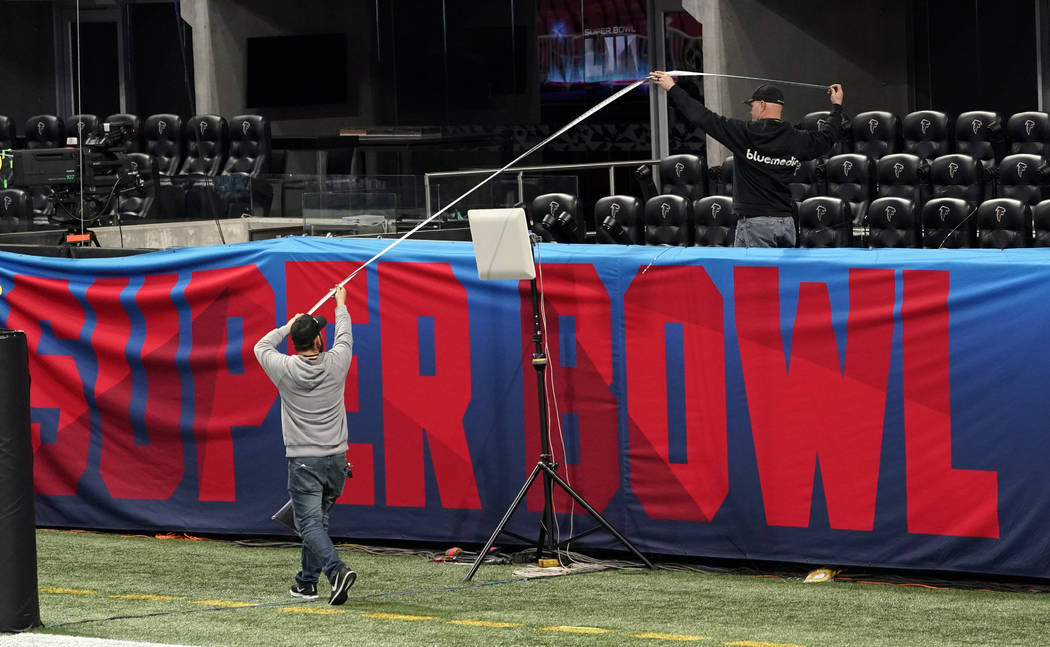 Workers use a tape measure as they hang a sign inside Mercedes-Benz Stadium for the NFL Super Bowl 53 football game Tuesday, Jan. 29, 2019, in Atlanta. (AP Photo/David J. Phillip)

ATLANTA — Less than a mile from where Martin Luther King Jr. lived before being assassinated in 1968, where nearly 45 percent of families live below the poverty level, in a community whose history is defined by vacant homes and drug busts and violent crime, a benefactor once compared restoration to religion.

Three years ago, Chick-fil-A CEO Dan Cathy told The Atlanta Journal-Constitution that it took Nehemiah 52 days to construct a wall but much longer to create the kind of revitalization that Jerusalem needed.

Cathy’s point: A physical and spiritual resurrection was required for a ravaged region in the Old Testament, much like the one he and others envisioned for their town’s Westside, at whose center now sits the grandest of sports and entertainment structures.

Super Bowl LIII has arrived at Mercedes-Benz Stadium, where an NFL season will conclude in Atlanta for the first time in 19 years with the New England Patriots engaging the Los Angeles Rams, where more than 70,000 will gather for unquestionably the most important event yet at the $1.6 billion home of the Atlanta Falcons.

“No matter what the final score is,” said team owner Arthur Blank, “Mercedes-Benz Stadium will shine.”

Las Vegas has a similar dream of welcoming the world to the game of Roman numerals, which it will also chase on the shoulders of a $1.8 billion domed stadium set to open in 2020 and house the Raiders. The soonest a Super Bowl could be awarded to Southern Nevada by the NFL is for the 2025 game.

“When we were bidding on the event, the stadium was nothing but CADs and drawings and renderings and digital,” said Dan Corso, chair of the Atlanta Super Bowl Host Committee. “But to see it come to life was fantastic. When you’re hosting this size of an event, you want the event owner to be happy, and the NFL seems very happy.

“There is a reason cities compete to host these big sporting events. It’s impactful to a city both economically, from visitors coming in and spending money over multiple days, and there is a social impact with various community legacy programs like we have brought to the entire Westside.

“But in order to get any of those impacts, you need a venue of high quality, and the one we have is second to none.”

There might not be any NFL Falcons without Mercedes-Benz Stadium. There absolutely wouldn’t be any Atlanta United FC, also owned by Blank and champions of Major League Soccer in 2018, a team that has routinely filled to capacity what is a sporting palace financed through a combination of public and private funds.

No matter what the final score is, Mercedes-Benz Stadium will shine.

There sure as heck wouldn’t have been another Super Bowl, last held here at the Georgia Dome in 2000.

The latter, as has been known to happen across a sporting world of bigger and better facilities in which to entice the most significant events, simply wasn’t up to modern standards.

It was functional enough and served its purpose, only not to the level Blank desired. The object wasn’t to build a better Georgia Dome. It was to change the entire stadium game, and Atlanta has.

There is a Halo scoreboard, the largest in professional sports at 58 feet tall, offering 63,000 square feet of 360-degree HD video screen. There are 7,500 club seats and more than 100,000 square feet of space dedicated to climate-controlled club and premium areas. There is a 14-acre retractable roof, which has eight moving panels that weigh about 500 tons each, and yet officials were still deciding late this week whether or not it would be open for Sunday’s game.

There is a 13-acre park that doubles as a tailgate-friendly area and concourses that connect so you can move vertically throughout the building, complete with wide staircases and twice the elevators and escalators once offered by the Georgia Dome.

A bottomless soda, complete with free and unlimited refills, is $2.

While most NFL stadiums, and many in the college ranks, force fans to withdraw a hefty amount of cash from the ATM even before kickoff, Blank’s pledge to offer the lowest concession prices in professional sports won’t change, even for the Super Bowl.

“We didn’t do it in terms of economics,” said Blank. “We did it because it’s the right thing to do for the people who are supporting our business.

“When we built the stadium, we had a lot of options on where to put it, but we wanted to change the quality of life of the people living in (the Westside). And when people walk into the stadium, we want to find ways to thank them and show appreciation for their time and energy and passion and commitment.”

It doesn’t hurt the team’s bottom line that the stadium is within walking distance of 10,000 hotel rooms and next to two commuter rail stations. And, while you will receive differing opinions on how deep an impact all of this has had on the Westside, an area that just a few years ago was described as one the poorest in the Southeast, it’s true the Blank Foundation has contributed $40 million toward projects and community initiatives.

What it all does, in some ways, is offer a town like Las Vegas and its new stadium a blueprint for how best to host the NFL’s biggest game of a given season.

Atlanta is different from most anywhere in that nearly all of the events surrounding Sunday’s game will take place on or within a screen pass of the Georgia World Congress Center Authority campus. It’s a short walk to everything, be it the game or Super Bowl Live concerts or the Super Bowl Experience theme park.

Las Vegas couldn’t offer that level of convenience, but few cities can. What it will offer beyond the 65,000-seat Raiders stadium and more than enough hotel rooms and world-class entertainment options is an unparalleled level of knowledge when it comes to Super Bowl weekend.

Consider: Las Vegas drew more than 300,000 visitors last year while the Patriots were playing the Eagles in Minneapolis, the highest Super Bowl visitation in Southern Nevada since 2000.

And this: The reported total economic impact was north of $400 million, meaning Las Vegas made more off the game than Minnesota, which spent three years preparing to host.

So while Las Vegas might want the game, it doesn’t really need it.

“We haven’t crunched the exact numbers to this point, but any city that hosts a Super Bowl, including Las Vegas, will have the eyes of the sporting world on it,” said Steve Hill, president and CEO of the Las Vegas Convention and Visitors Authority. “As we look at events, we look first at the economic impact and media value associated with it.

“It’s true we are already full here on any Super Bowl weekend, but it’s not just about that. As a host city, the buildup to the game is over weeks, and that would mean putting a lot of people to work. The impact of hosting a Super Bowl would be significant in a lot of different areas for us.”

All of which will be carried on the shoulders of a state-of-the-art stadium, which means everything.