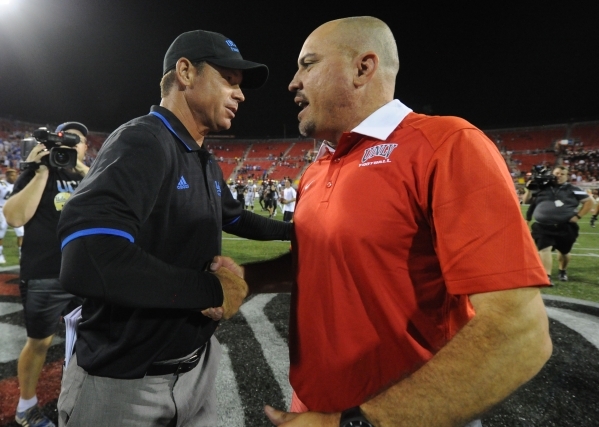 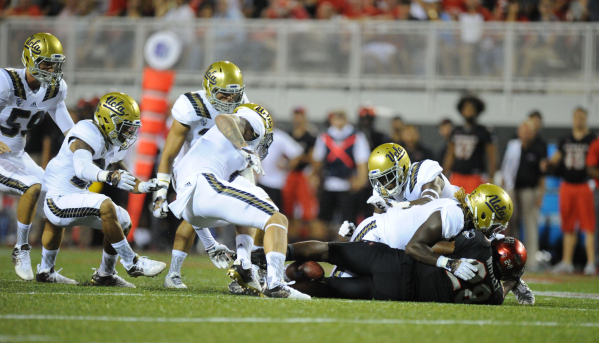 The stars aren’t aligned for success this week.

The tea leaves long ago sunk to the bottom of a maize and blue cup.

UNLV plays a football game at Michigan on Saturday, and the 34-point spread gives you an idea about how those who set lines believe the Rebels will fare in one of the most iconic of college stadiums.

The expected result: A beatdown in “The Big House.”

But no matter what might transpire on a scoreboard over four quarters, UNLV will depart Michigan Stadium with the sort of benefit those from non-Power 5 conferences covet and need.

“At the end of the day,” Rebels athletic director Tina Kunzer-Murphy said, “it’s a cool million dollars. That always makes for a good weekend.”

It’s actually more than that.

The Rebels will receive from Michigan and TV fees a total north of seven figures for making the trip and engaging the Wolverines, coached now by the supremely skilled and yet decidedly detached Jim Harbaugh, who seems to enjoy picking and choosing when he might answer the most routine of questions.

Harbaugh did refer to “the Las Vegas team,” and being impressed with its size and strength, all but confirming he hadn’t watched a second of film on the Rebels.

No matter. In a big picture view, UNLV earning such a sizable paycheck upstages how serious (or not) the Wolverines and their coach take the Rebels.

When you are UNLV and operate on an annual athletic department budget in the neighborhood of $34 million — which is what Michigan probably spends on office supplies — you’re not in the position of turning down such a jackpot.

Not all Power 5 programs are alike regarding such matters. Some, such as Wisconsin, will see the value in agreeing to a home-and-home series with UNLV, understanding Las Vegas is the sort of destination city in which it can sell fancy hotel and dining packages to fans and alumni.

Some, such as Michigan and Ohio State in 2017, prefer to stay home and pay the Rebels a boatload of cash for the right to throttle them and move on to more important business.

“It’s important to play high-caliber (nonconference) teams,” Rebels coach Tony Sanchez said. “It helps recruiting. It helps develop your current team and toughens it up. They’re great opportunities. Now, I don’t know if you want to do it every single week, but at the end of the day, this is college football. Anyone can beat anyone.”

In theory, yes. But in the realty of where UNLV football has existed for some time now, balance is key when scheduling outside the Mountain West. UNLV hosted and was routed by UCLA 37-3 last week — a game the Rebels return next year — and are now at Michigan seven days later.

That’s a pretty big McWhopper combo for any non-Power 5 team with little depth to digest.

“It’s part of my job to find additional revenue streams,” Kunzer-Murphy said. “It’s very important we have this (Michigan) game for that reason. We have a lot of fans heading to ‘The Big House.’ That’s an exciting thing.”

The ideal scenario for UNLV: Schedule such a payday every other season, allowing time to recruit better players and perhaps even compete to win when such opportunity arises.

Playing at Michigan and Ohio State (a guaranteed $1.3 million) for big money makes sense for the Rebels.

It makes even more sense to schedule West Coast teams from Power 5 leagues.

It makes zero sense to schedule such upcoming home-and-homes with Arkansas State and Idaho, games that should be labeled lose-lose given few UNLV fans would be inspired to book trips to Jonesboro, Ark., or Moscow, Idaho, and no matter how much the Rebels might be struggling at the time, falling to a Sun Belt Conference opponent always would be viewed in a negative manner.

Kunzer-Murphy didn’t make deals for either of those home-and-homes. She inherited them, and I’m guessing she’s not trying to land games with Texas State for a Sun Belt Trifecta.

But the Rebels have signed a home-and-home with Arizona State, beginning in 2020. They will be paid $1.15 million to play at Southern California in 2019. They host Brigham Young in 2017.

All adhering to the theory of balance.

“If I have a hand in (scheduling) moving forward, I think it’s advantageous to everyone if we play Pac-12 schools,” Sanchez said. “You look at the game against UCLA last week — great crowd, great atmosphere, lot of ties from our community to Southern California. Those are natural fits when we play these big games.”

But that seven-figure check will fit nicely into the bank account of UNLV athletics.