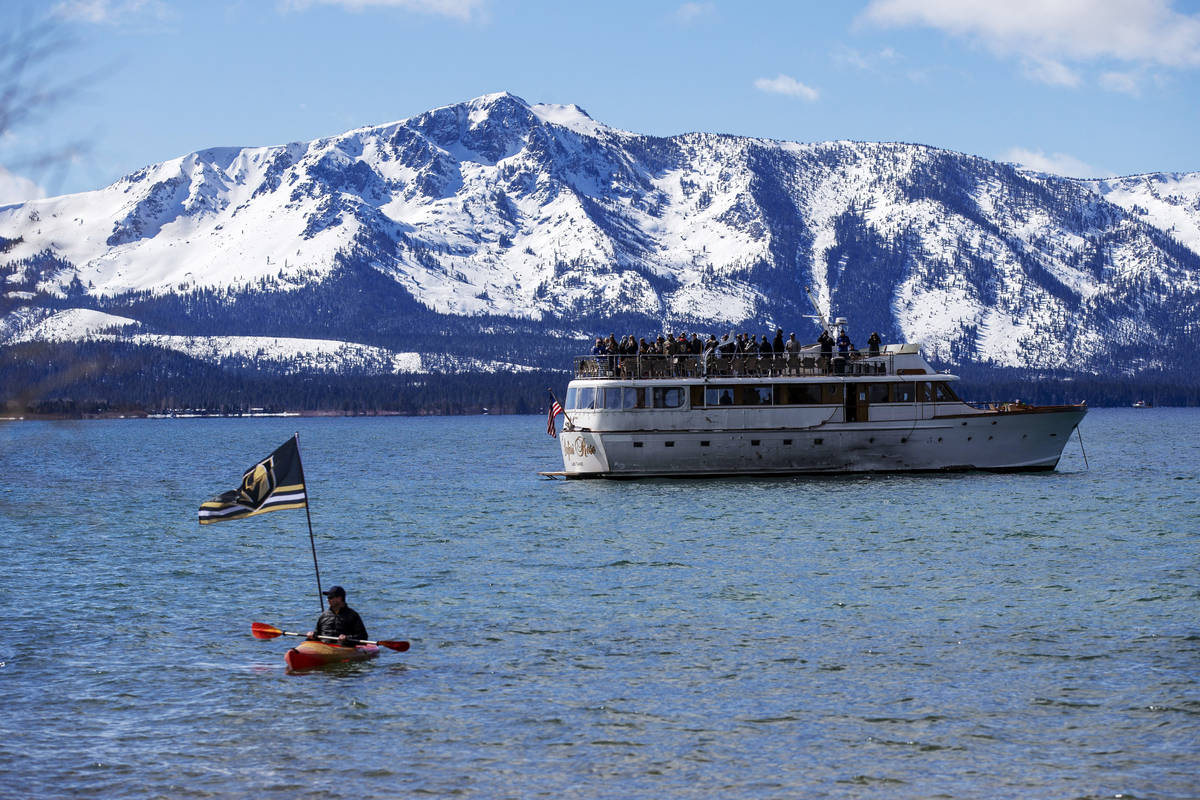 Fans watch the first period of an NHL hockey game between the Vegas Golden Knights and the Colorado Avalanche being played on an outdoor rink at Edgewood Tahoe Resort from Lake Tahoe, Saturday, Feb. 20, 2021, in Stateline, Nev. (Heidi Fang/Las Vegas Review-Journal) @HeidiFang 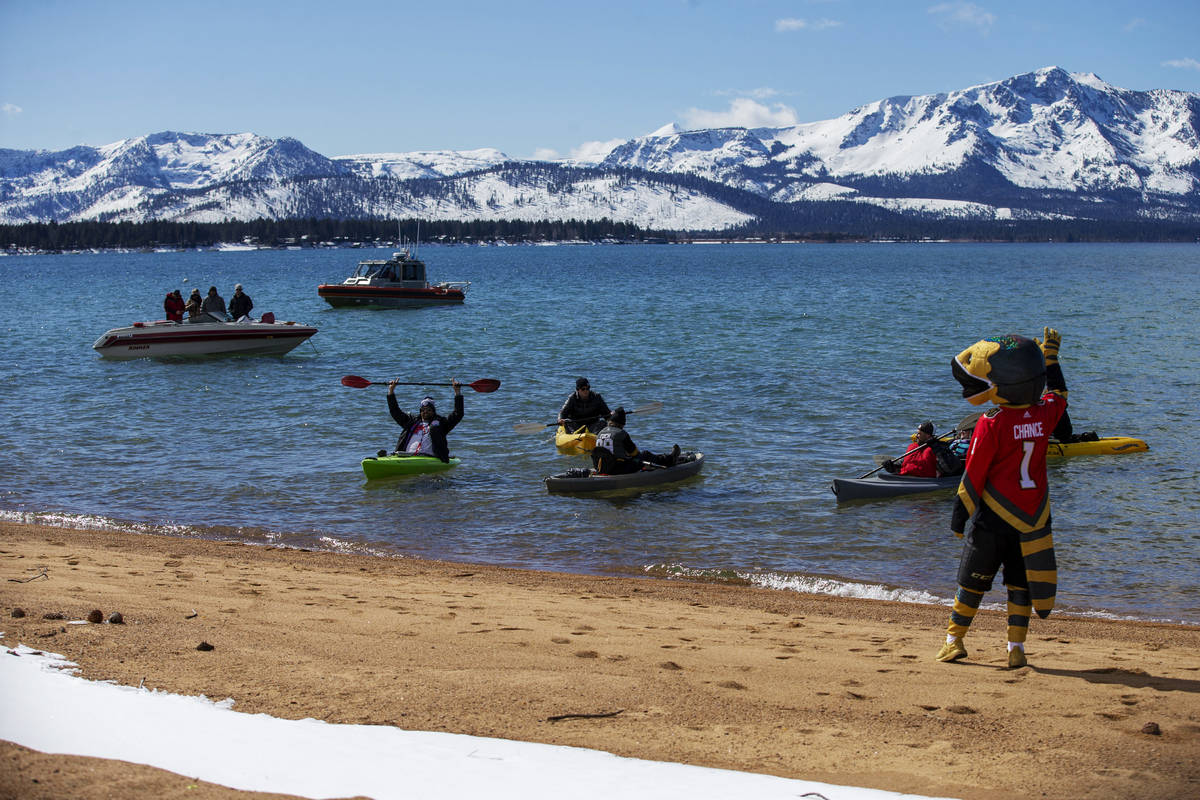 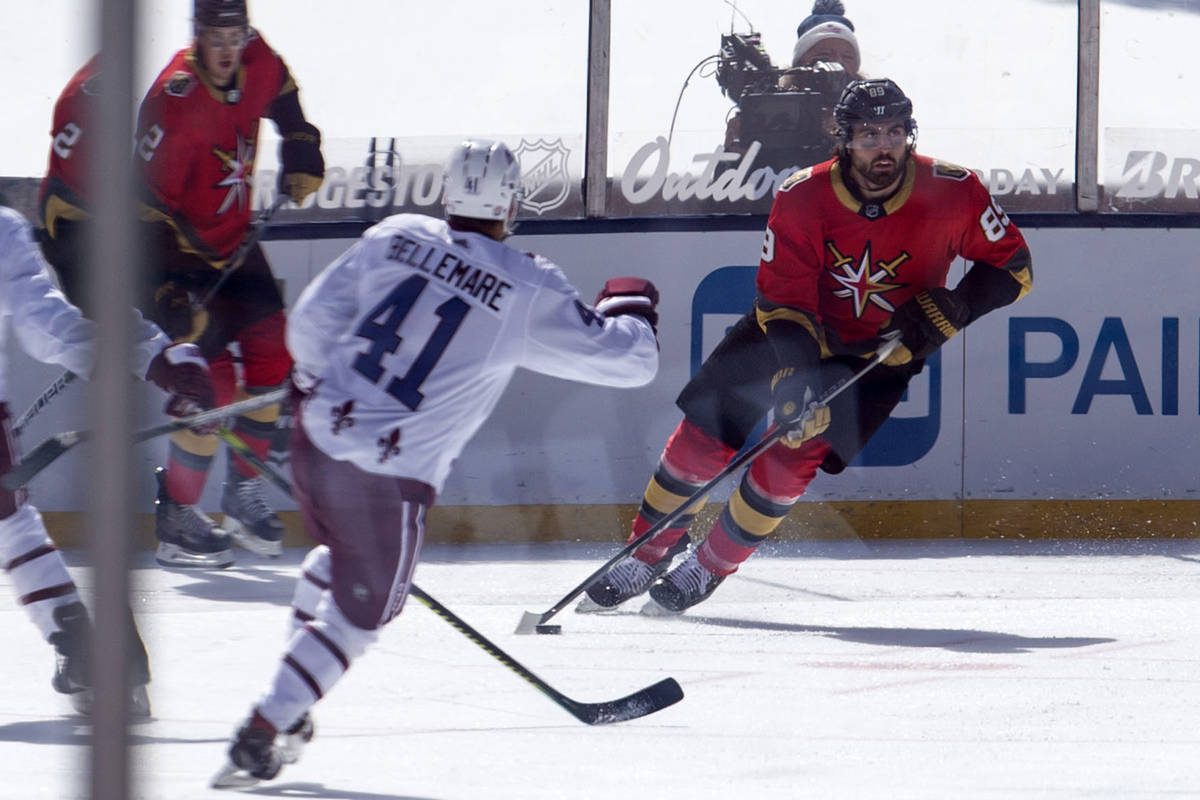 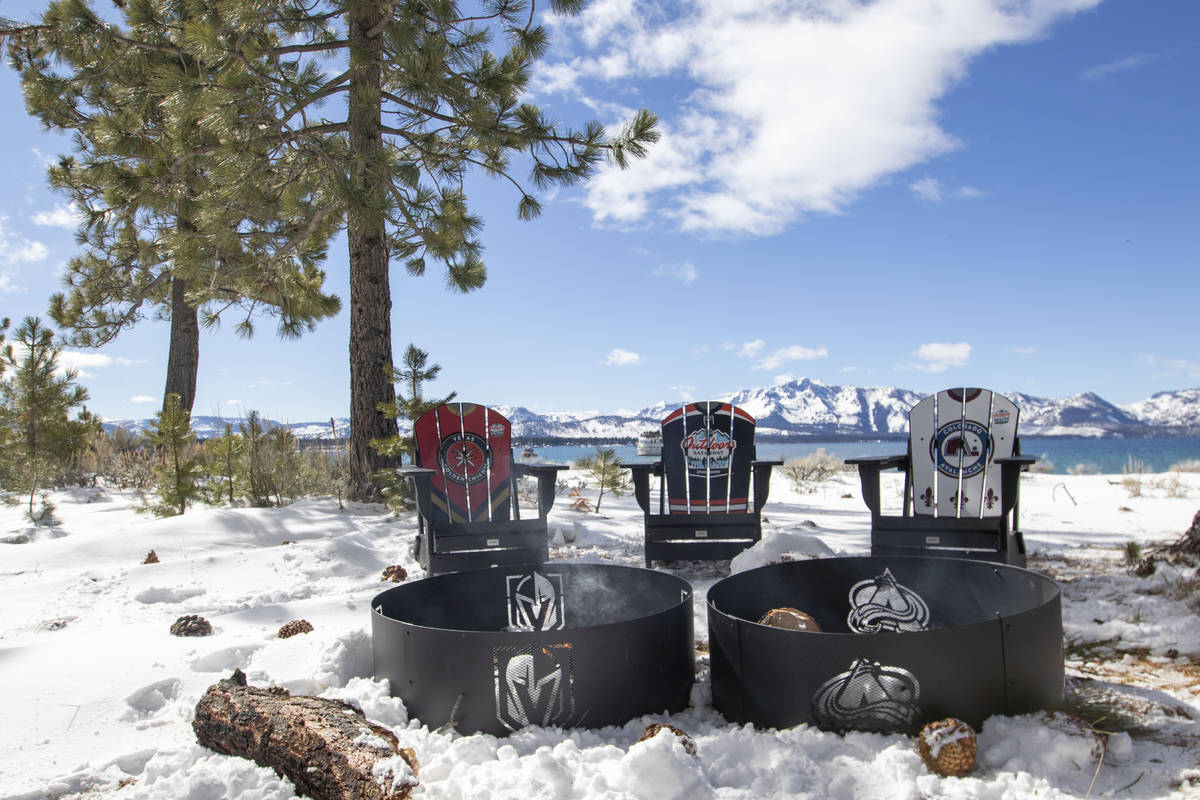 Chairs showing the teams logos are placed near fire pits on Lake Tahoe during the first period of an NHL hockey game between the Vegas Golden Knights and the Colorado Avalanche, Saturday, Feb. 20, 2021, at Edgewood Tahoe Resort in Stateline, Nev. (Heidi Fang/Las Vegas Review-Journal) @HeidiFang 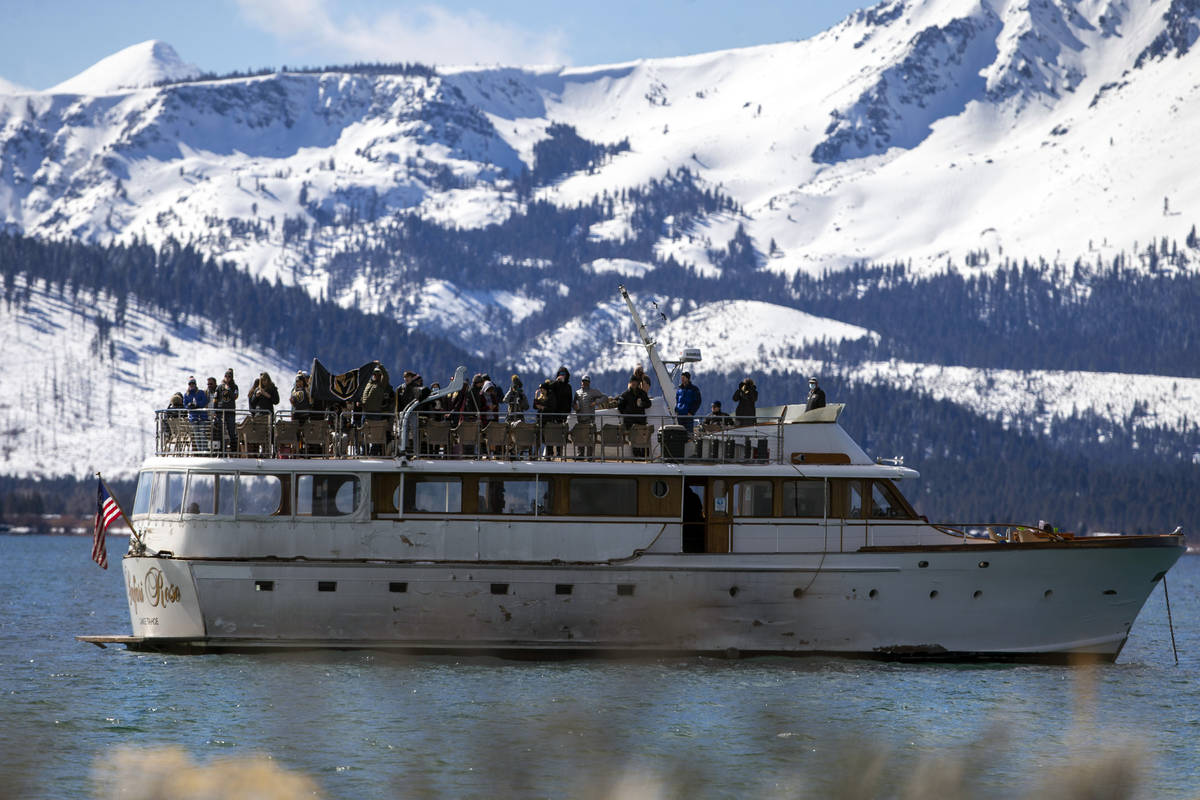 Fans watch the first period of an NHL hockey game between the Vegas Golden Knights and the Colorado Avalanche being played on an outdoor rink at Edgewood Tahoe Resort from a boat in Lake Tahoe, Saturday, Feb. 20, 2021, in Stateline, Nev. (Heidi Fang/Las Vegas Review-Journal) @HeidiFang

STATELINE — Imagine that. The only thing standing in the way of a perfect day in one of the world’s most picturesque settings was … too much sun.

Clear skies can mean slushy ice, a hand dealt to the NHL on Saturday when its outdoors game between the Golden Knights and Colorado Avalanche was delayed after the first period.

The game was set to resume at 9 p.m. Pacific time with Colorado leading 1-0.

It’s one thing for a hockey player to accept such conditions — a rink built on a golf course next to a lake — might bring stickiness to the surface. It’s another for them to be proficient at the 100-meter butterfly just to remain upright when flying through the neutral zone.

One positive: At least the Golden Knights weren’t wearing those God-awful gold helmets. They might have blinded some folks.

Gary Bettman likes to control every facet of his league, but the commissioner is no match for Mother Nature. She saw fit for some serious energy and radiation to be pointed directly at the Edgewood Tahoe Resort.

There was cloud cover all over the sky — except for the part directly above the rink.

Hey, what are you going to do?

Thinking outside the box inevitably comes with a certain amount of risk. The NHL swung for the fences with such a unique setup, and until things got too hot, the concept was justly praised all week for being near-flawless.

And it was, but for the shiny stuff from above.

This was the year — when COVID-19 made it impossible for fans to attend — to get overly creative. The league did. The elements didn’t comply. Bettman can be as arrogant as they come and an easy mark for many things. This isn’t one of them.

“This was really taking the game out to its roots in terms of surroundings. Obviously, we tried to do something different in an unusual time to try and give our fans something special.”

It had the makings of a fine day, snow having dropped overnight and teams awaking to overcast skies. There was even a social media post of Flyers mascot Gritty — Philadelphia is scheduled to meet Boston on Sunday at the same rink — strolling through the snow like Bigfoot while wearing a fur coat.

Not quite Bigfoot,
But still an urban legend. pic.twitter.com/jbBbLJWA9C

I mean, everything was in line for creating all sorts of memories.

But by the time a first stoppage in action occurred, enough snow had melted around the rink that you knew the ice was in trouble. Then the first period ended, and it rightly became about player safety. After a delay of more than an hour, it was announced the game would resume under lights.

Feet from the rink as play began, gliding by in mostly calm waters, were the sorts of boats and kayaks often seen during the American Century Celebrity Championship golf tournament.

Many flew flags of various NHL teams, and one fan wore a Golden Knights jersey of forward Alex Tuch.

Kristina Britt lives down the mountain in Carson City and has been a fan since the franchise’s inception.

“My very first hockey team,” she said. “When I heard they were coming, I had to see them. Kayaking was a good option. It was a great day on the water, but a little unfair the ice couldn’t hold up. It has been a pretty mild winter. We haven’t had too many big storms. We love the sunshine.”

They got a whole lot of it Saturday.

Imagine that, is right. A hockey game was delayed because the weather was too beautiful.