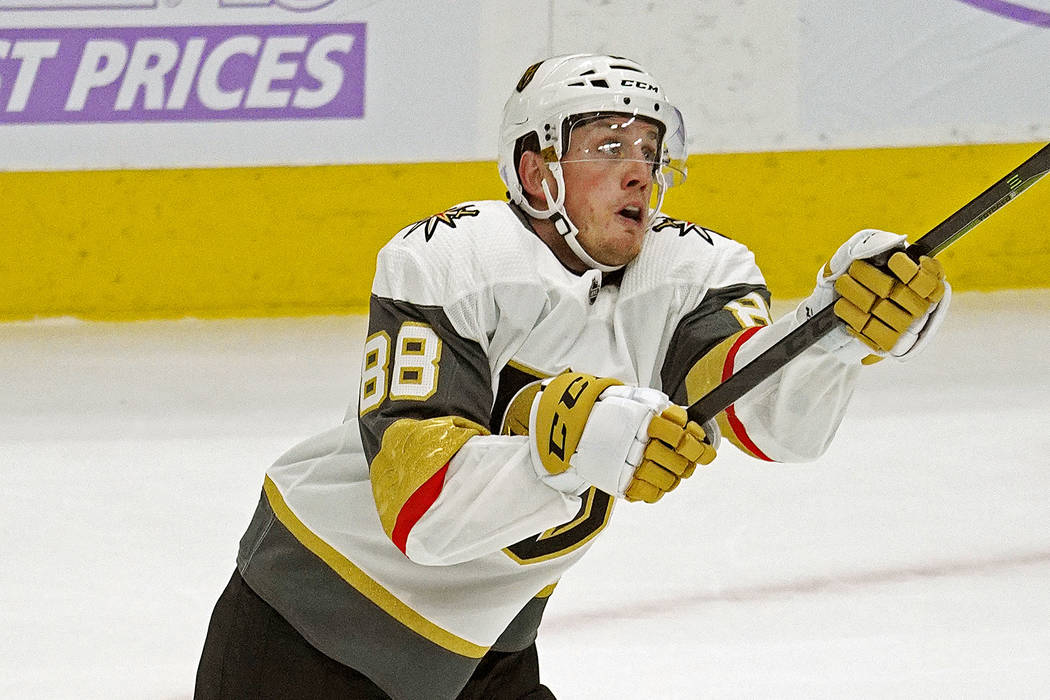 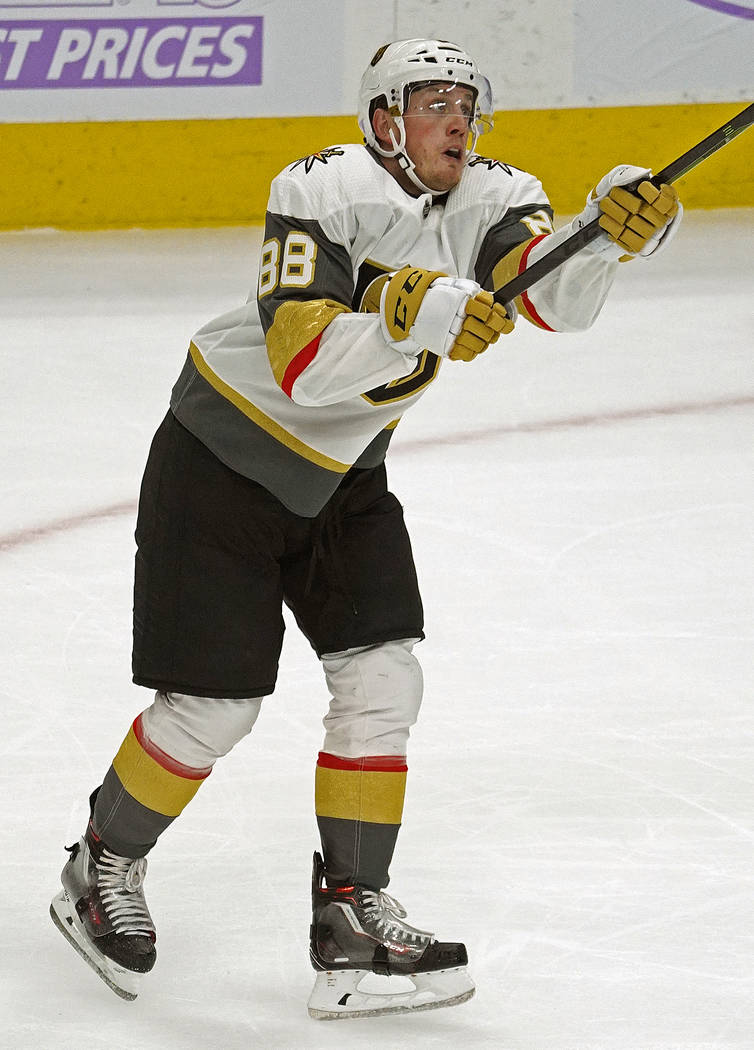 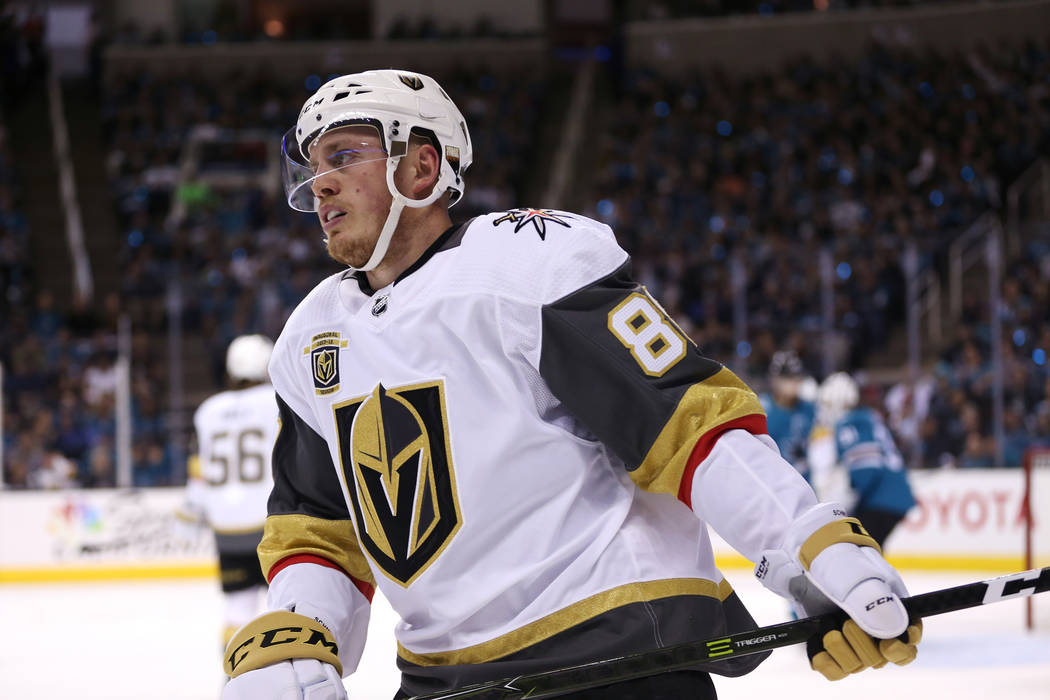 In this May 6, 2018, file photo, Vegas Golden Knights defenseman Nate Schmidt (88) is seen during the first period in Game 6 of an NHL hockey second-round playoff series at the SAP Center in San Jose, Calif. Erik Verduzco Las Vegas Review-Journal @Erik_Verduzco 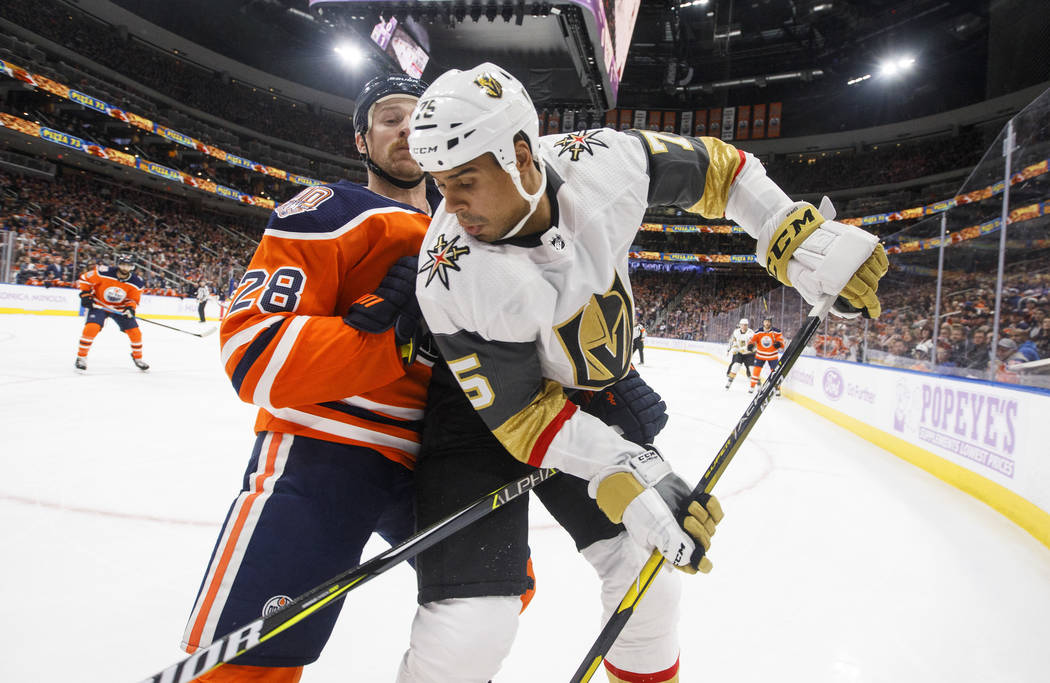 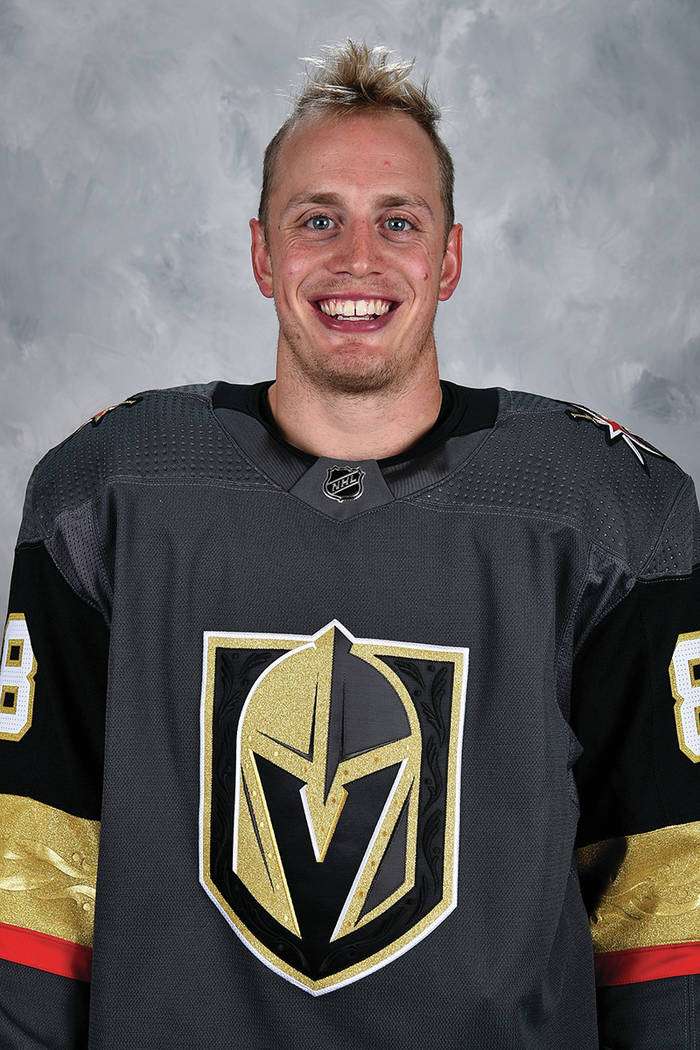 LAS VEGAS, NV - SEPTEMBER 14: Nate Schmidt of the Vegas Golden Knights poses for his official headshot for the 2017-2018 season on September 14, 2017 at the City National Arena in Las Vegas, Nevada. (Photo by Jeff Bottari/NHLI via Getty Images)

EDMONTON, Alberta — In those first few days, when he felt the walls of skepticism closing in, he turned off his cellphone and went to that dark place of personal doubt.

He wasn’t sure how those closest to him would react.

He wasn’t sure, really, how he should act.

If happiness is found at home, Nate Schmidt can finally celebrate his return to the place he feels most a sense of normalcy and joy, gliding across a sheet of ice as a member of the Golden Knights, their best defenseman with both a game and personality Vegas has sorely missed to begin the season.

He’s back, smiling as wide and as often as ever, and for at least a night things seemed somewhat familiar, the Knights opening a three-game road trip with a 6-3 win against Edmonton on Sunday before an announced gathering of 18,347 at Rogers Place.

Schmidt served a 20-game suspension for violating the league’s performance-enhancing drug policy, spending part of that time working out in Vienna before returning to the Knights in preparation of making his season debut here against the Oilers and their lightning fast star Connor McDavid.

“For a while there, it was really hard, and I struggled with it,” Schmidt said of his time away. “I didn’t allow myself to (be happy). Sometimes, I’d just go for walks and a buddy would pick me up on the side of the road. I just needed to walk to blow off steam.

“My brother and friends reached out those first few days and said, ‘You don’t have to turn the phone back on, but there are a lot of people (supporting) you.’ That made me feel a lot better. It lifted my spirits. I’m just going to do my best to bring all the positive feelings back.”

When we last saw him in the Stanley Cup Final, Schmidt was paired with Shea Theodore, so it made sense that the duo skated together Sunday.

It couldn’t have gone better.

What an ideal opponent for Schmidt to return against. When speed is an issue on the other side, having him as another swift skater and stabilizing the blue line and creating odd-man rushes makes Vegas a far more dangerous team than without him.

There were some plays Schmidt could have made and didn’t. The third period arrived and he had to check his legs to determine how much he had left. But this is his type of game. Up and down the ice. Feet constantly moving.

It was also a key win for Vegas, specifically how it reversed a bad trend of second-period meltdowns. Instead, the Knights took control in the middle stanza. They scored three times — one short-handed, one at even strength and one via the power play — over just 2:12.

It was, in that small window of dominance, more like last season’s team than at any time during this up-and-down start over the last six weeks.

It also means another victory against a Pacific Division foe and a strong start to the trip for a team that before Sunday was 3-8-0 away from T-Mobile Arena.

Mostly, it means their best defenseman is back, who earlier in the day compared trying to defend and stay with McDavid — who had his 12th goal of the season to open the game’s scoring — to a college-level Econ 5000 final exam.

“Good luck with that,” said Schmidt. “It’s no midterm. It was definitely a lot of adrenaline to start. My heart was pumping pretty hard. I was excited, nervous, anxious, whatever buzzword you want to use. But it all felt good. Overall, I think Shea and I did a great job. I hold myself to a high standard. I want to make sure I’m ready to play and I can execute at a high level.

“(The suspension) sucked. It was a tough time, even for me, because I’m a pretty positive guy. I tried to make the best out of a crappy situation. But now I’m excited to be back with the guys. I’m just excited to play hockey, stepping onto the ice and doing what you love.”

He’s home, that dark place of doubt replaced with a smile from here to, say, Vienna.