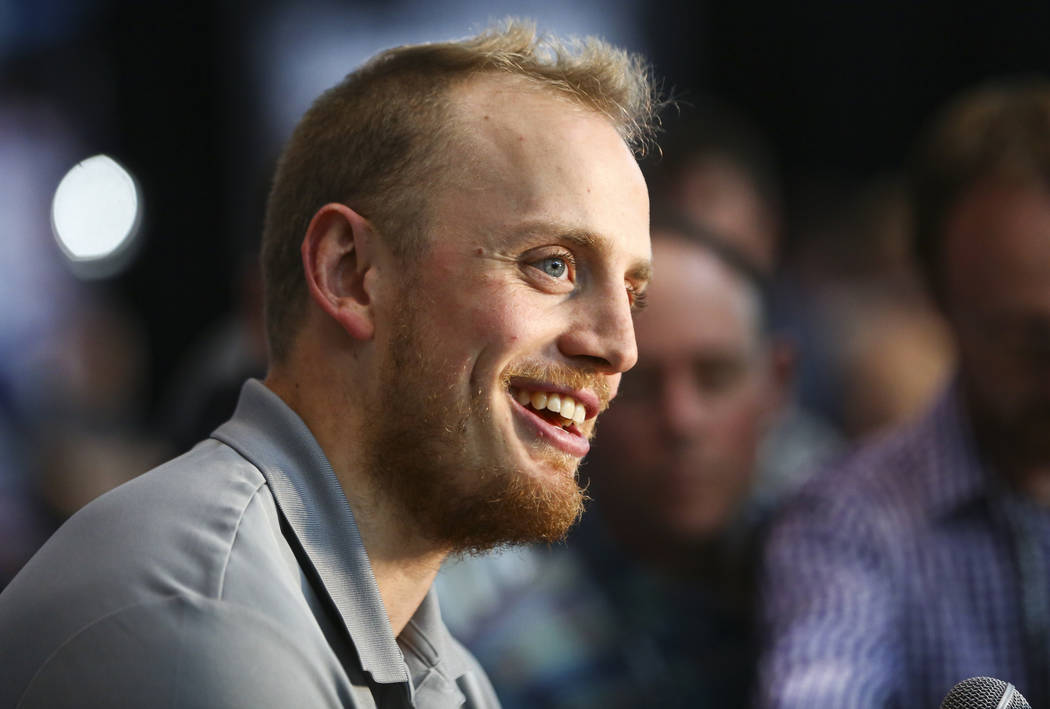 Nate Schmidt issued a 375-word statement Sunday in response to being suspended by the NHL for 20 games, a result of the Golden Knights defenseman violating the league’s performance-enhancing drug policy.

In it, he offered this: “I will not accept being labeled a cheater.”

Maybe so, but it’s not up to him now.

When it comes to how others view Schmidt for testing positive and then losing an appeal in front of an impartial arbitrator, he is officially at the mercy of the same court of public opinion that has for decades judged those athletes suspended within a sport’s drug program.

Some will always believe him.

It sure would make things easier to side with the former had Schmidt’s statement included the only two points that matter: When was he tested?

What was the substance?

But that, of course, would mean the NHL’s collectively bargained drug program not being a complete joke.

Schmidt’s case opens up a long-standing truth, that the protocol by which the NHL tests players remains a laughable option for catching those who cheat and, well, perhaps exonerating those who test positive but didn’t.

Of the four major professional sports — none of which come close to owning the credibility of how things are done through the U.S. Anti-Doping Agency — hockey is the worst.

More than any such past cases, I want to believe Schmidt, as popular and accommodating a player as Vegas has, engaging and introspective and gracious.

But herein lies the issue for an unbiased eye:

Any drug-testing program should be evaluated on two factors.

First, the bones of it — how often are athletes tested, when are they tested and what sort of tests are run on samples?

Forget about the minuscule trace amounts Schmidt said were found. Unless the date of the test is known, it’s extremely difficult to determine if anything nefarious went on.

Second, and just as important: How transparent is the process?

When a player like Schmidt so adamantly proclaims his innocence and his team so adamantly supports it, the idea a league and its players association have agreed that the names of substances causing failed tests aren’t to be released only heightens the folly of it all.

On one hand, I can’t fathom why players wouldn’t want the substance released. If it truly was an unintentional act — say, naturally produced nandrolone leading to a tainted sample — then going public might only strengthen the argument that no deliberate cheating occurred.

I mean, at least Canelo Alvarez gave us the bad beef excuse.

On the other, if a player is caught for something such as synthetic testosterone, well, then he was assuredly doping and the most popular response is to deny, deny, deny.

So this is what you have: The only impartial person with all the evidence ruled against Schmidt, and unless we know what the arbitrator does, how can anyone rightly play the role of public arbitrator?

Schmidt also said in his statement that the only supplements he uses are provided by his NHL team.

If true, where does that put the Knights?

With no transparency in the matter, shouldn’t they be questioned as to what exactly is being supplied players?

With no specific substance or date of test revealed, no release of the arbitrator’s decision, no hint that Schmidt intends to bring legal action against any specific supplement company (athletes who claim innocence, for some reason, never do), a 325-word statement, however passionately penned and perhaps truthful in nature, falls short.

This is on the player. It always is. As a professional athlete getting paid handsomely, Schmidt is responsible for anything that goes into his system. There is no middle ground. He knows this.

But this is also a league that doesn’t test on game days (joke), administers up to two “no-notice” tests annually with one conducted on a team-wide basis (joke), has a mandatory maximum of 60 offseason tests in a league of 700-plus players (big joke), and that in a period between 2005-2017, suspended only five players for PED use (even bigger joke).

What, the NHL is the only major sports league full of millionaires and those trying to become them with nobody doping?

I want to believe Schmidt. I would imagine most do. I know the fans do.

But until the NHL offers a real drug-testing program, until we know when such a test occurred and what he tested positive for, the court of public opinion will decide how he is viewed.

Some will always believe him.

Such is reality when transparency is absent from the story.