When he has finished a late-evening meal in Las Vegas, Raiders owner Mark Davis often will drive to what will soon be his football team’s new home.

He will stroll the grounds and chat with many of the night workers, marveling at the massive structure under construction, eventually finding himself alone, in the dark, standing at what will be the 50-yard line of Allegiant Stadium.

He turns at a snail’s pace, a human mill wheel revolving slowly on its axis, engrossed with every inch of that which he has envisioned for so long.

“I will look around at all of it and pinch myself,” Davis said. “It’s fantastic. I seriously can’t drive by there and not stop. It will be around midnight, and the guys are more able to talk then. I love going out there at that time. It’s very calm.

It’s a quiet moment, unlike those defined by deafening crowds at stadiums across the country during opening week of the 2019 NFL season.

Or, as Southern Nevada knows it, one year from when Davis’ dream becomes reality.

It was March 2017, inside a swanky Phoenix resort, when the Raiders received well above the 24 votes needed to approve the move. The final tally was 31-1, with only Dolphins owner Steve Ross voting against relocation from Oakland to Las Vegas — something about not believing Davis and the NFL had done enough to land a new stadium in the Bay Area.

What is known two years later: A $2 billion state-of-the-art stadium is on schedule to open in July.

What isn’t: How an NFL team will impact Las Vegas.

Jay Kornegay is vice president of the Westgate sportsbook and lived in Denver during the late 1970s and early ’80s, when a 3-4 defense of the Broncos earned a moniker of “Orange Crush,” and you couldn’t go anywhere in town without seeing jerseys and memorabilia and various examples of the love affair between a community and its team.

It will happen here, too, Kornegay believes.

Perhaps much sooner than most surmise.

“I think it’s going to change things for all of us — hotels, bars, restaurants, special events, the books, taxi drivers, the airport, all different forms of hospitality and business,” Kornegay said. “I think everyone is trying to rack their brains on what needs to be done to take advantage of having this new team here. It’s a whole new ballgame when you get (the NFL). Experiencing what I did in Denver, I can only imagine how big the Raiders will be in Las Vegas.”

He already has some proof.

The Raiders in 2016 advanced to the playoffs for the first time in 14 years, and it was during a 12-4 regular season when Kornegay said the team’s broad appeal showed more and more at the betting windows.

Folks involve their money with the Raiders even when the team is losing, and there has been plenty of that for some time.

But when the scoreboard tends to fall in their favor, well, it’s a wagering bonanza.

“It has always felt like this is a Raiders town, and in those times they have had some success, it’s not close,” Kornegay said. “It’s a regional team, so you’re going to have fans from Arizona and Southern and Northern California invading Las Vegas to see games. They have fans everywhere. And once they start winning again, which in time they will, it’s going to be the most-bet team each Sunday by a large margin.

“I’m not sure most people really know how big this is going to be.”

A town and its team

They have been here without really being here.

The Raiders team that will land in Las Vegas could be one of the league’s youngest and most promising, with coach Jon Gruden choosing to keep 12 rookies — four of the undrafted variety — on this season’s opening game roster.

One player they won’t have in Las Vegas is All-Pro wide receiver Antonio Brown, whose bizarre and contentious tenure with the Raiders since arriving via trade in March ended with the team releasing him on Saturday. Brown signed with the Patriots shortly after being cut loose, the latter a move he requested of the Raiders on social media.

Brown created a roller coaster of headlines much of the summer and through a training camp chronicled by the HBO series, “Hard Knocks,” the proverbial final straw being his confronting and threatening general manager Mike Mayock at practice, after which the team voided nearly all of Brown’s guaranteed $30 million.

With that soap opera behind them, Gruden and Mayock continue to move critical pieces on a chessboard designed to make the Raiders playoff-worthy their first season in Las Vegas. All the while, those entrusted to connect town with team have for a few years now engaged with adults and children alike in areas such as health and fitness and game day experiences and charitable giving.

There was the $50,000 donation to the Las Vegas Victims’ Fund in the wake of the mass shooting of Oct. 1, 2017, matched by the NFL, along with an additional $50,000 from the league to the American Red Cross for assisting with blood drives and other relief efforts.

There was a $150,000 donation to Veterans Village Las Vegas and in support of the Power of Love gala for the Lou Ruvo Center for Brain Health. There were all those Aces tickets purchased and donated by Davis. There have also been several events in which Raiders alumni, led by director of public affairs Mike Taylor, have been present since relocation became official.

“At the time of (the vote) I really never counted my chickens,” Davis said. “You just never know what might happen. Games don’t end at halftime. We still have some time before it officially happens.

“But when it was approved, I was thrilled and shocked and excited all at once. I’ve said often that we don’t expect the entire town of Las Vegas will love us when we get here. We have to earn that, and we plan on doing so. But so far, the attitude and welcome has been phenomenal, and we’re not even here as a team yet.”

Next year at this time, they will be.

And the place Davis often visits late at night, turning at a snail’s pace on the 50-yard line, will be a whole lot louder.

MOST READ: Raiders
1
NFL investigating Raiders for breach of protocol, per report

4
Twitter reactions to the Raiders’ loss to the Patriots 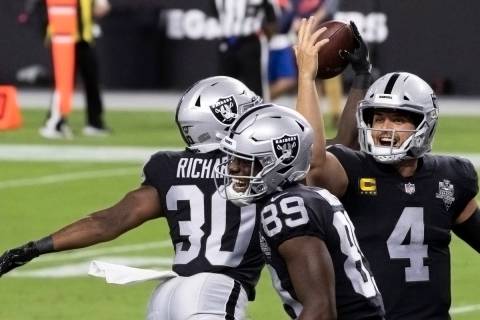 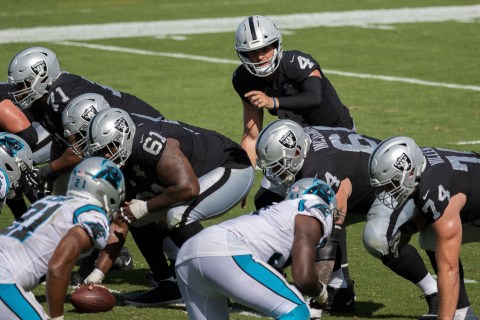