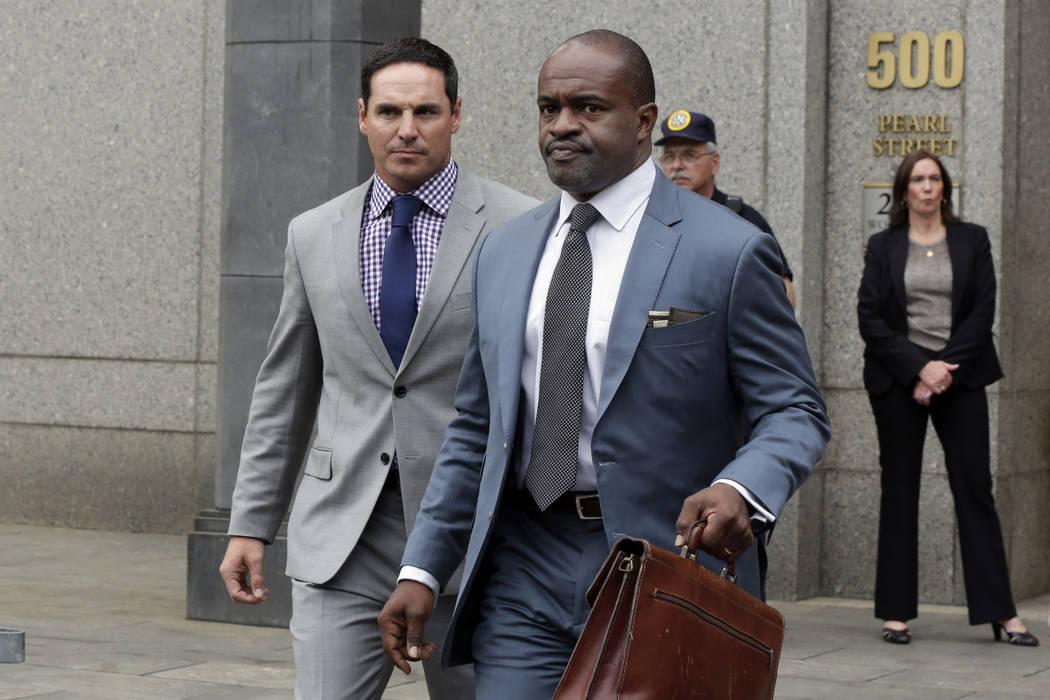 Can you fire an effective warning shot four seasons early?

And if so, how seriously should it be taken?

If things go as the Raiders have stated, the NFL team won’t officially relocate to Las Vegas until 2020, no matter what occurs with a lease at the Oakland Coliseum that is set to expire a year earlier.

But any momentum the franchise gains throughout Southern Nevada when it kicks off in its state-of-the-art stadium off Russell Road could be seriously hampered if what DeMaurice Smith has now suggested is a virtual certainty proves true.

Another labor war is brewing.

Smith, the executive director of the NFL Players Association, told Sports Illustrated he believes the league will experience either a lockout or strike when the current collective bargaining agreement expires following the 2020 season.

Tom Brady could be wearing nine Super Bowl rings and talking about playing into his 50s by then.

Marshawn Lynch could be living in Scotland full-time as a candy vendor.

Bill Belichick could be sitting on the Iron Throne after it’s discovered the Mad King is really alive.

But there is precedent for work stoppage, which has occurred six times in league history, the most recent a lockout that lasted more than five months in 2011. Only the preseason Hall of Fame game was lost, but it was a stoppage that could have lasted into the season had players not been as concerned about losing paychecks.

You would think they are more educated and prepared now. Tensions are also greater between the league and it players this time. The two sides are hardly best of friends.

Nothing brings a steady flow of cash to a town like NFL games, and given it’s still unknown exactly what percentage of locals to those visiting will comprise most of the weekly attendance figures for the Raiders in Las Vegas, any stoppage during a season could seriously impact potential tourism dollars, never mind the wallets of those working at the stadium.

They don’t stand to gain anything by a strike or lockout, because unlike those bickering at a negotiating table over things like revenue sharing and the level of power a commissioner should wield, such folks usually don’t have inflated margins on which to rely.

“It would be extremely disappointing, first as a football fan and second, obviously, for the stadium and all that would mean to people working there,” said Clark County Commissioner Steve Sisolak. “You hope it would never come to that and that both sides eventually come together and have an agreement well before any (deadline). Obviously, it’s premature to talk about something like that this far out. Maybe it’s just posturing by the participants.

“If it happened, it would be terrible. The first three years are about jobs for people who are going to build the stadium. But after that, it’s permanent jobs. They would still be needed for UNLV games and other events, but when you’re talking about eight regular-season games and two in the preseason for the Raiders, that’s a lot of (revenue).”

Work stoppages in professional sports also breed apathy among fan bases. The longer players either remain on strike or are locked out, the more those who are asked to pay for tickets and parking and concessions and merchandise grow impatient with rich people figuring out who gets the larger slice of a financial pie.

Such indifference isn’t good for any NFL city, much less one which would be in the infancy stages of building its base while welcoming a franchise into the community on all levels. You could make an argument Las Vegas, because of how new things would be around here, would be impacted most by any stoppage.

“Obviously, if the time comes and it looks like things are headed in that direction, I’m sure there will be contingency plans,” Sisolak said. “I think everyone would hope that (Smith’s comments) are merely a shot across the bow and that eventually, the sides will get together and come to a deal well before the current one expires.”

Warning shots are intentionally harmless, which is what you would expect when trying to make a point in 2017 about something that might happen in 2021.

But it won’t remain a benign threat forever and you have a league full of unhappy players who want major changes to several aspects of the current deal.

A strike or lockout wouldn’t be good for anyone, especially a town that will have recently opened for NFL business.