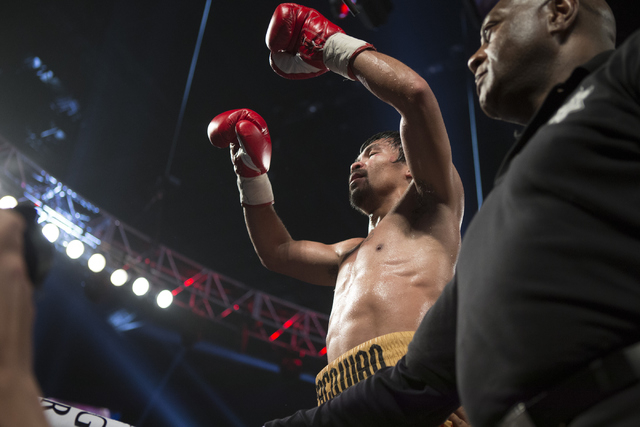 If this was goodbye, and I’m not sure anyone from here to General Santos City believes it, thank goodness it’s how we can remember Manny Pacquiao the fighter.

Nobody wanted the image of such an incredible champion to be that of nearly a year ago.

Much of the goodwill Pacquiao lost upon losing to Floyd Mayweather Jr. in May of 2015 and then disclosing a prefight shoulder injury seemed to float away in a chorus of cheers at the MGM Grand Garden on Saturday night, when for the third time Pacquiao proved the more skilled and efficient fighter against Timothy Bradley.

All three judges scored the welterweight fight 116-110 in favor of Pacquiao and it was a fair assessment, meaning it wasn’t a repeat of the first matchup between the two, when a split decision victory for Bradley in 2012 was beyond ridiculous.

The following two fights proved as much, a trilogy ending with Pacquiao throwing 439 punches to Bradley’s 302 and the winner landing 122 to 99, culminating with one of the greatest fighters ever to grace a ring being asked if this was indeed his final time.

“As of right now, I am retired,” Pacquiao said. “I want to go home and think about it and be with my family and serve my people … This was the best of the three fights with Bradley. He is a very tough fighter. This is the best Tim Bradley that I faced.”

Do you know that saying in basketball about how difficult it is to beat the same opponent three times?

Not when you are better in most every way.

The same holds true for boxing.

There weren’t any firemen speeches Teddy Atlas could give this time, no inspirational words about heat not bothering Bradley and that he could extinguish all flames.

Maybe against a fat Brandon Rios in November.

Not against a Pacquiao determined to leave the sport with a resounding win.

Atlas was working Bradley’s corner for a second time and spoke all week about the importance of his fighter seeing the storm before it arrived, that there are signs you can decipher, clouds or rolling thunder or lightening, that allow one to sense the impending downpour.

Bradley couldn’t sense much of anything all night.

“Manny was very strong,” he said. “He was also very patient. I wasn’t professional enough to also be patient and because of that, walked into some shots. He’s just very explosive and it’s hard to judge him, to judge his reflexes. He also has the experience. I lost the fight. I lost to a special man.”

Pacquiao is 37 and insists he will now spend all his time serving politically in the Philippines, even though he was asked following Saturday’s fight about the possibility of future matches with the likes of Canelo Alvarez and again Mayweather, the latter still retired and yet whispers have grown louder recently about his possible return.

The Pacquiao we saw Saturday can absolutely continue fighting and be successful.

He is one of the all-time greats, one of the sport’s most thrilling fighters in history.

He won titles in eight weight classes. Think about that.

If this was goodbye, then visions of Morales and Larios and Barrera and Diaz and De La Hoya and Hatton and Marquez and Cotto and Mayweather and now Bradley flash before us. If this was goodbye, we can admit to having watched better fighters than Pacquiao, but not many more exciting.

And he went out throwing, twice putting Bradley on the canvas.

“I was going for a knock out every round,” Pacquiao said. “My (right) shoulder felt great. It never gave me any problems. (Atlas) obviously made a big difference in Tim. It was a great fight.”

It was Bradley on Wednesday who talked about having to be at his very best in order to win, that if this was indeed the final time the world would watch Pacquiao fight, a half-decent effort wouldn’t be enough.

It wasn’t the greatest fight and yet it wasn’t a bad one. Pacquiao is simply the better athlete, the better fighter, the better everything when to comes to what occurs inside the ring.

If this was goodbye, Freddie Roach doesn’t believe it needs to be.

“I loved the way Manny threw his combinations,” said Pacquiao’s longtime trainer. “He looked a little rusty, but Manny’s left trumps all.

“If he wants to fight again, I think he can still go.”

A year ago, I’m not sure anyone thought that, or wanted to see it.

Now, after Saturday, the tide and public opinion seems to have shifted a bit in relation to Manny Pacquiao the fighter.

If this was goodbye, it’s not because he can’t still electrify an arena.