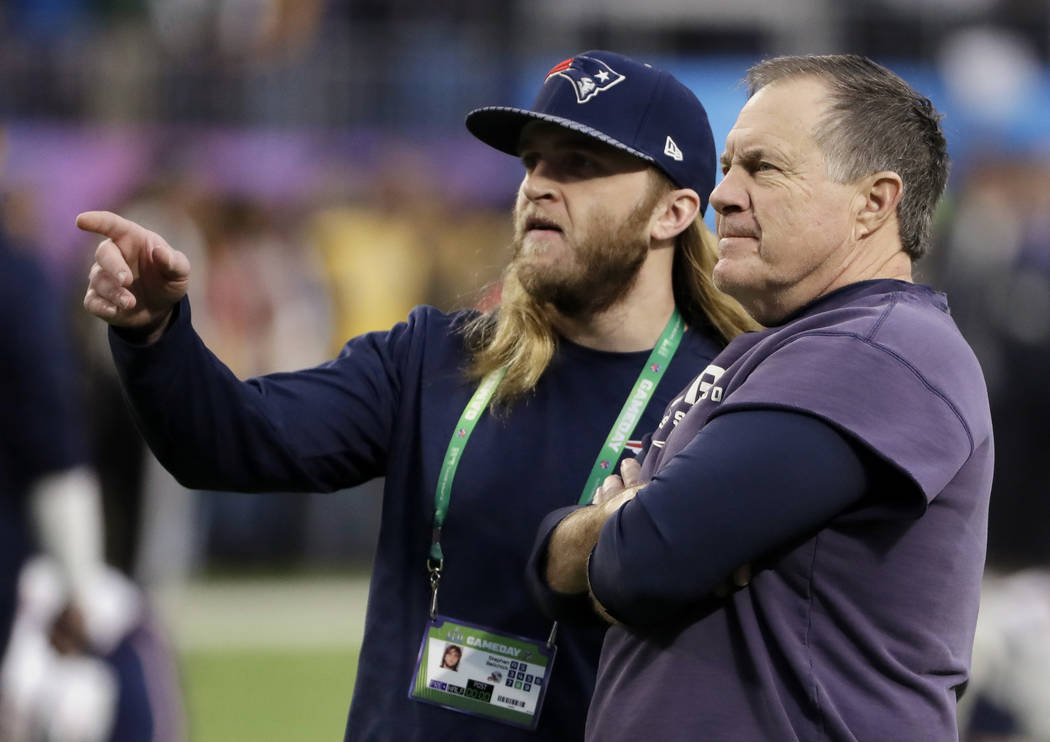 ATLANTA — The son wishes he had stopped and listened more. Observed from afar. Soaked in every last detail.

The son has no time for that now.

In classic Belichick manner, he understands the task at hand: “I’m not looking at anything except Sunday and hopefully beating a really good Rams team.”

My goodness, onto Mercedes-Benz Stadium, is right.

Is this how Jakob Dylan feels when everyone wants to talk about Bob?

Is this the sort of unreachable hoop Michael Jordan’s sons saw when taking their first jumper?

Is this how things go when one of Jerry Seinfeld’s boys is asked to tell a joke on the playground?

Stephen Belichick quickly reminds you that he was named after his grandfather, the man who taught him about football and fishing and family and friends and most everything else important in life, and wouldn’t you know he mentioned football first.

But as much as he wants to better understand those mysterious nuances and perplexing traits that have shaped his father into the greatest head coach the game has known, he can’t for a second dismiss a foremost family characteristic: The only thing that matters is preparing for the next game.

Belichick is in his third season as safeties coach for the Patriots and seventh overall under his father, Bill, whose New England team faces the Rams in Super Bowl LIII.

“My Dad is really unique and really smart,” said Stephen, 31. “I wish that I had more time to just watch him, but I have my own job. When I was younger and working his training camps, I was too stupid to pause and watch. Now, I’m too busy. Obviously, what he has done is really impressive. I’m sure there will be a time when he is done coaching that I can ask him about all of it.

“Right now, it’s all about the Rams. And when that’s over, we’re behind on the draft. And then we have to get ready for OTAs. And then it’s summer and here we go again. You never want to get caught behind. My grandfather always told me, ‘Winners finish first.’”

The only thing missing was a hoodie.

Bill Belichick is 66 and on Sunday will be seeking a sixth Lombardi Trophy as a head coach, an unfathomable level of success in a salary-capped era that is purposefully designed to deny any such dynasties being created. He was also part of two Super Bowl wins as an assistant with the Giants.

The son was actually a lacrosse player for three years at Rutgers before becoming a long-snapper on the football team. His younger brother, Brian, also works for the Patriots as a first-year defensive assistant, each branch of the coaching tree tracing back to one man.

Steve Belichick was a player and coach and scout. His book, “Football Scouting Methods,” is considered the best written on techniques of the game. He had son Bill watching game tape at age 10.

I can’t believe the guy started so late.

Steve died in 2005 and yet still to this day will an interview pass — the rare ones where he says more than a gruff or two — that Bill doesn’t mention his father’s influence.

Sunday is the same and different. For a ninth time, Belichick will stroll the sidelines as head coach of a Patriots team playing in a season’s final game. For the first time, he will share the moment with his two sons as part of the staff.

“It’s been a great experience to be able to come in every day and just experience things with them,” said the father, in his 19th season leading the Patriots. “You experience them with other people on your staff, too, but it’s great to have your kids involved. I think it’s been good for all of us.

“Right now I’m really just focused on trying to help our team do the best job I can to prepare for the Rams. I’m not going to really worry about anything else besides that.

“As far as the future goes, the future for me is Sunday night against the Rams.”

Which means just one thing: There is film to watch.