Paul Guenther didn’t spend halftime of a Raiders-Chiefs game Sunday drawing up a season’s worth of new calls. Didn’t totally change any scheme. Didn’t stand on a chair punching holes through a picture of Patrick Mahomes.

Guenther’s message was simple: Understand better how Kansas City is attacking. Make you-know-who as uncomfortable as possible. Keep coming at the Super Bowl MVP quarterback and his half-a-billion dollar contract.

Do more than you have been.

Las Vegas defenders followed their coordinator’s guidance better than perhaps he could have even hoped, a major reason the Raiders departed Arrowhead Stadium a 40-32 winner.

This, as more bodies fell injured for a Raiders defense already depleted.

Suit up, be ready

“I tell guys all the time, ‘If you’re in a uniform, you’re going to play,’ ” Guenther said. “Some guys did a great job taking mental notes in practice.

“That’s the NFL. We’ve had a lot of guys go down. We were running guys in and out all afternoon. So to play the best offense in the league and come out with a win, that’s a credit to the players.”

They didn’t blitz Mahomes all that much. The Ravens did in Week 3 and got burned. Guenther is no different than any coordinator. When the Chiefs’ quarterback is flushed from the pocket and asked to ad-lib, the mere sight causes one to hold his breath and hope coverage holds up.

But when the Raiders went for it on fourth-and-inches from the Kansas City 44 at the two-minute warning, essentially ending the game, everything that Guenther preached during the week had paid off with the team’s third win in five games.

Yes. One side helped the other. Incredibly so. Carr and the offense possessed the ball for over 35 minutes Sunday, including just under 20 for the second half. But over four straight possessions in those final 30 minutes, the defense forced three punts and safety Jeff Heath intercepted Mahomes for the quarterback’s first pick of the season.

Numbers might not tell the entire story, but they most often write the most important of chapters. And for some time now, those defining the Raiders’ defense haven’t been kind to Guenther or his players. The stats have been dreadful.

But here are some that the Raiders undoubtedly enjoyed Sunday: 7 — number of passes defended; 3 — number of sacks, one each from Maxx Crosby, Chris Smith and Nevin Lawson; 51.1 — completion percentage for Mahomes, lowest single-game mark of his career.

It’s also not as if, Guenther said Monday, Las Vegas has played “milquetoast” over these first five games. Hardly. The Raiders have engaged four of the top nine teams in total offense. They have also faced four of the top 11 quarterbacks — Josh Allen, Drew Brees, Mahomes and Teddy Bridgewater — in terms of rating.

On deck following a bye week: Tom Brady and the Buccaneers.

Part of the job

“We could have played better in our two losses, but I think if the players follow the plan and do what they’re supposed to do, we’ll be fine,” Guenther said. “The most important thing for me is that our chemistry and communication improves each week, especially with all the young players we have.”

It was during a zoom news conference following the game that Raiders quarterback Derek Carr praised Guenther, saying he hoped the coordinator received much credit for the win.

“He had a tough week,” Carr said. “I’ve had some tough weeks. That’s just part of the business.”

A big part. Results are all that matters. It’s the life. One week you’re the embattled coordinator whose job many are calling for, and the next you’re talking about how your defense played a major role in delivering one of the franchise’s best wins in recent history.

“I don’t pay any attention to it,” Guenther said. “My job is to get these guys in position to succeed each week. I tell the guys all the time that I’m nervous Monday through Saturday — am I showing the right plays and cards in practice to prepare them as much as I can? — but Sunday is for them. It’s a players’ game. That’s the only thing I care about.”

He cares about beating the Chiefs. They all do.

Through four games this season, Cory Littleton has struggled giving the Raiders much life at linebacker after signing a free-agent contract worth $36 million.

4 games into season, playoff path still there for Raiders
By Ed Graney / RJ

The web site PlayoffStatus.com affords Las Vegas a 42 percent chance of qualifying for the postseason.

Las Vegas is hitting the early part of a schedule everyone viewed as difficult to begin the season, the latest proof a 30-23 loss to Buffalo.

Grading the Raiders’ loss to the Bills
By Ed Graney / RJ

There were a lot of average marks going around for Las Vegas on Sunday. 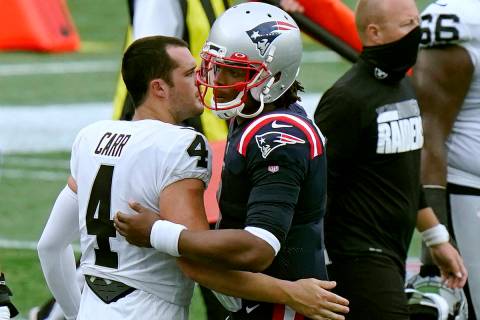 Patriots quarterback Cam Newton tested positive for COVID-19, but the NFL, to the delight of its fans, will play on this season.