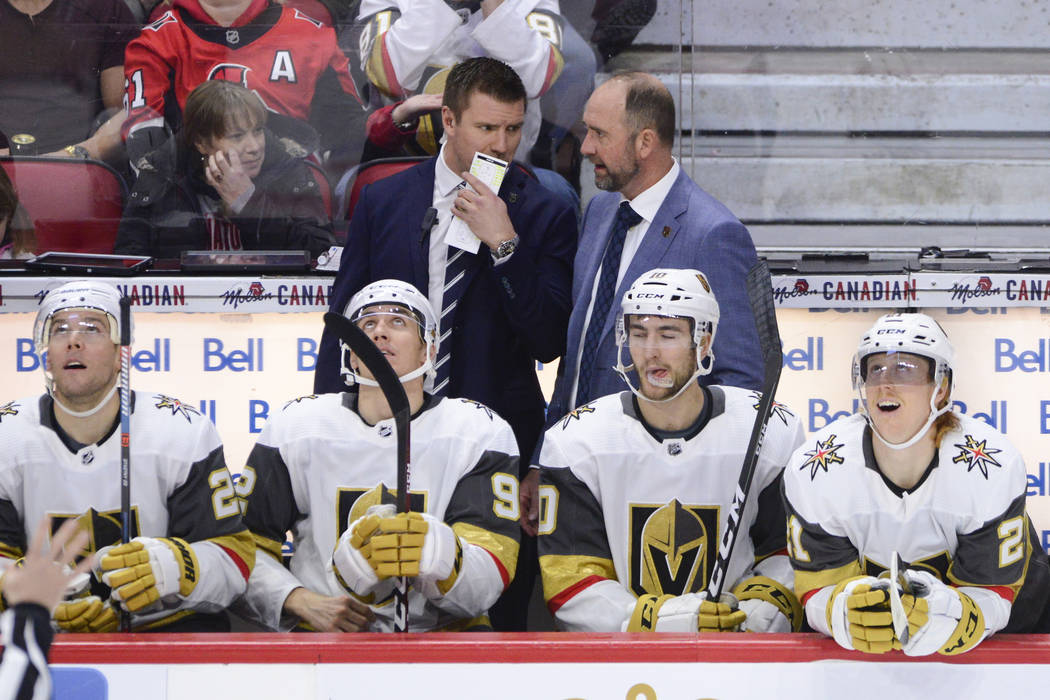 Vegas Golden Knights new head coach Peter DeBoer talks to one of his coaches on the bench as they take on the Ottawa Senators during the first period of an NHL hockey game, Thursday, Jan. 16, 2020 in Ottawa, Ontario. (Sean Kilpatrick/The Canadian Press via AP) 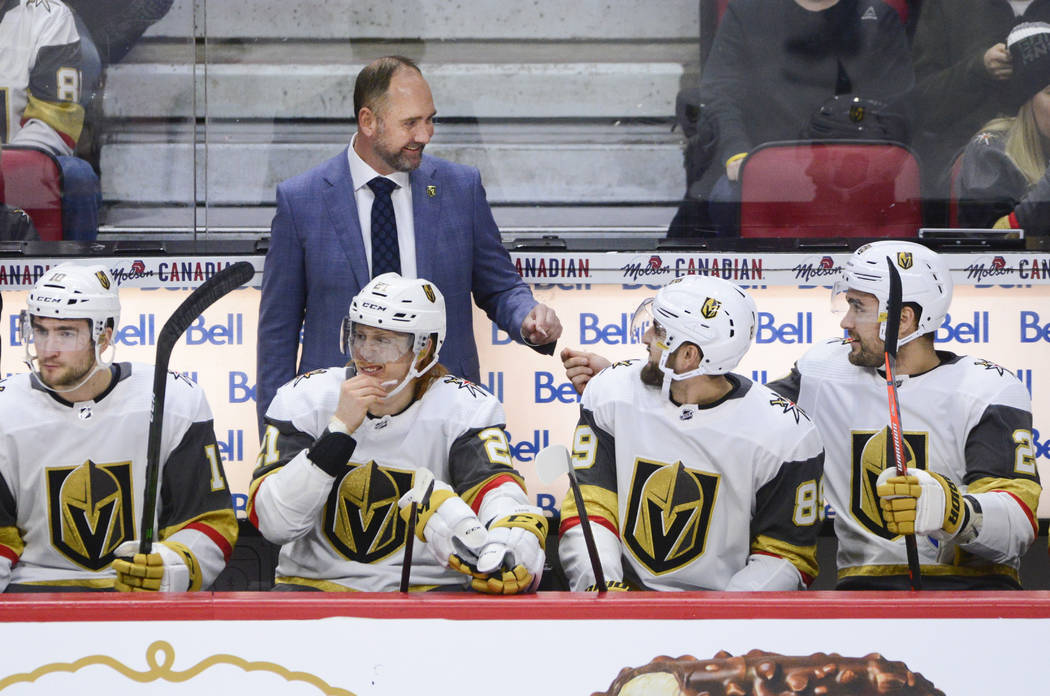 Vegas Golden Knights new head coach Peter DeBoer is seen on the bench as they take on the Ottawa Senators during the first period of an NHL hockey game, Thursday, Jan. 16, 2020 in Ottawa, Ontario. (Sean Kilpatrick/The Canadian Press via AP) 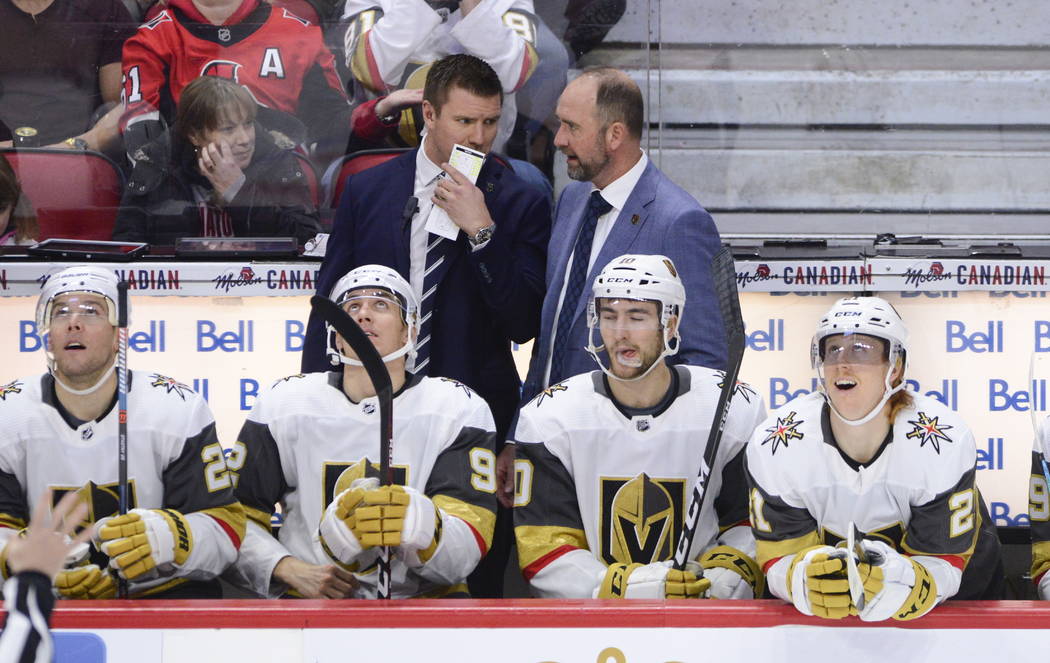 Vegas Golden Knights new head coach Peter DeBoer talks to one of his coaches on the bench as they take on the Ottawa Senators during the first period of an NHL hockey game, Thursday, Jan. 16, 2020 in Ottawa, Ontario. (Sean Kilpatrick/The Canadian Press via AP)

OTTAWA, Ontario — Breaking: Peter DeBoer didn’t wear a red nose and big floppy shoes in his debut as coach of the Golden Knights on Thursday.

But you can bet there exists a majority of fans who would have thought it a good look.

They certainly will be content with first impressions, the Knights having snapped a four-game losing streak by beating the Ottawa Senators 4-2 at Canadian Tire Centre.

But the part about welcoming a guy with open arms from the most passionate (obsessed?) followers of the Knights will take time, DeBoer having last directed the NHL team that Las Vegas has come to loathe before he was fired by the San Jose Sharks in December.

It was more surreal than anything else, seeing DeBoer wearing a Knights sweatsuit and hat when addressing the media a day after he replaced the fired Gerard Gallant.

OK, so it was really weird.

DeBoer doesn’t need to know the way to San Jose any longer, at least not until the Knights next arrive to the Shark Tank, which short of those wearing teal suddenly playing a whole lot better and making a playoff push, won’t occur until next season.

But the coach who was referred to as a clown by Gallant during last year’s playoffs understands the pause his hiring might have created.

In and out of the room.

“We’ll get through it,” DeBoer said of initially interacting with players. “It’ll be a little awkward, but we’ll get through it. I told them if I called any of them ‘Jumbo’ (for Sharks veteran Joe Thornton) or ‘Burnzie’ (for defenseman Brent Burns) to kick me. I didn’t. I didn’t make any mistakes on names. Maybe this is like meeting an ex-old-girlfriend or something that didn’t end well.

“You know, as far as what happened in the playoffs last year, when you battle with teams in intense moments like that, those were physical, hard series and there was a lot of them. We played each other a lot. I’ve seen more of these guys than I’ve seen of my wife and kids the last three years, it feels like.”

Try meeting two straight years in the playoffs. Try that controversial five-minute major in Game 7 last season, the one that caused the Knights to fall apart and opened the door for San Jose to jump through and win the first-round series.

DeBoer was sitting poolside in Florida with his wife and daughter when the call came from the Knights, management obviously believing theirs is a more promising roster than results have shown this season.

So it turned to a coach who previously led New Jersey and San Jose to the Stanley Cup Final, who when taking the Sharks to such a coveted place in 2015-16 remembers it being a .500 or so team in January.

Things can change fast, especially if the Knights again start playing as such.

Teams can find themselves. Magic can resurface.

You wouldn’t think any major personnel or strategic changes would come soon, DeBoer having never taken over a team in midseason and probably unable to get the amount of practice time he desires this far into the schedule.

But he will tweak things. He will put his stamp on these Knights.

He even recalled a conversation with Gallant when the Knights and Sharks met to open this season at T-Mobile Arena, a talk about last year’s playoffs and things that were said and how it was all history between two ultra-competitive coaches.

Whether Las Vegas — or even his new players — are as quick to forget is another story.

“Ten months ago, we probably wouldn’t have said a nice thing about him,” said Knights forward Mark Stone, playing his first game in Ottawa since being shipped to Las Vegas at last season’s trade deadline. “We don’t say anything nice about the Sharks. But his teams always play hard and have been successful. Hopefully, he can bring that energy into our room.

“I think (DeBoer) is excited to be part of this organization or he wouldn’t have taken another job this quickly. We have to be ready to go for him from the start. We have to be positive or we are not going to succeed.”

If they do, especially at the level DeBoer and his new team consider possible, the clown emoji will be replaced with that of a king.

Winning meaning everything to the most passionate and obsessed.

If he does enough of it, those welcoming arms will open wide.