RJ App
Vegas News, Alerts, ePaper
OPEN
Raiders quarterback Derek Carr gave his sideline a scare when he went down with an apparent ankle injuries during the team's win over the Steelers. Carr describes what was going through his head when he hit the ground. (Cassie Soto/Las Vegas Review-Journal) 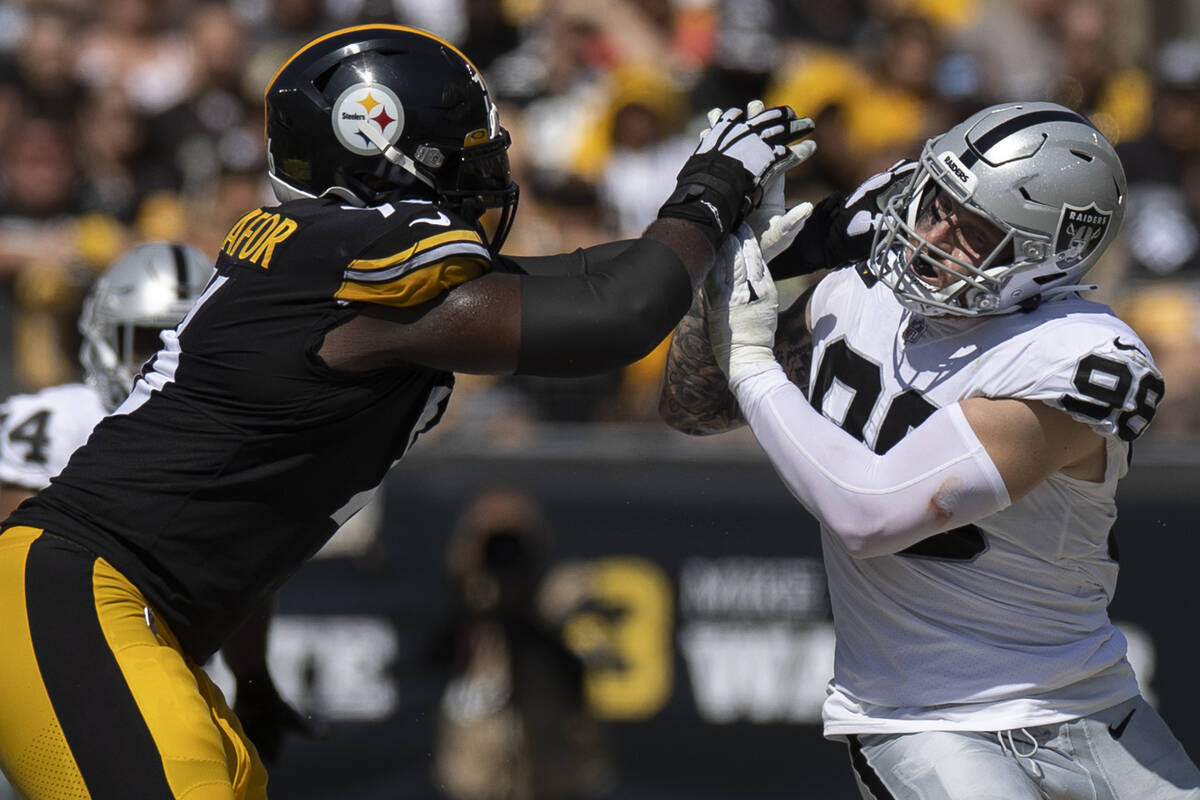 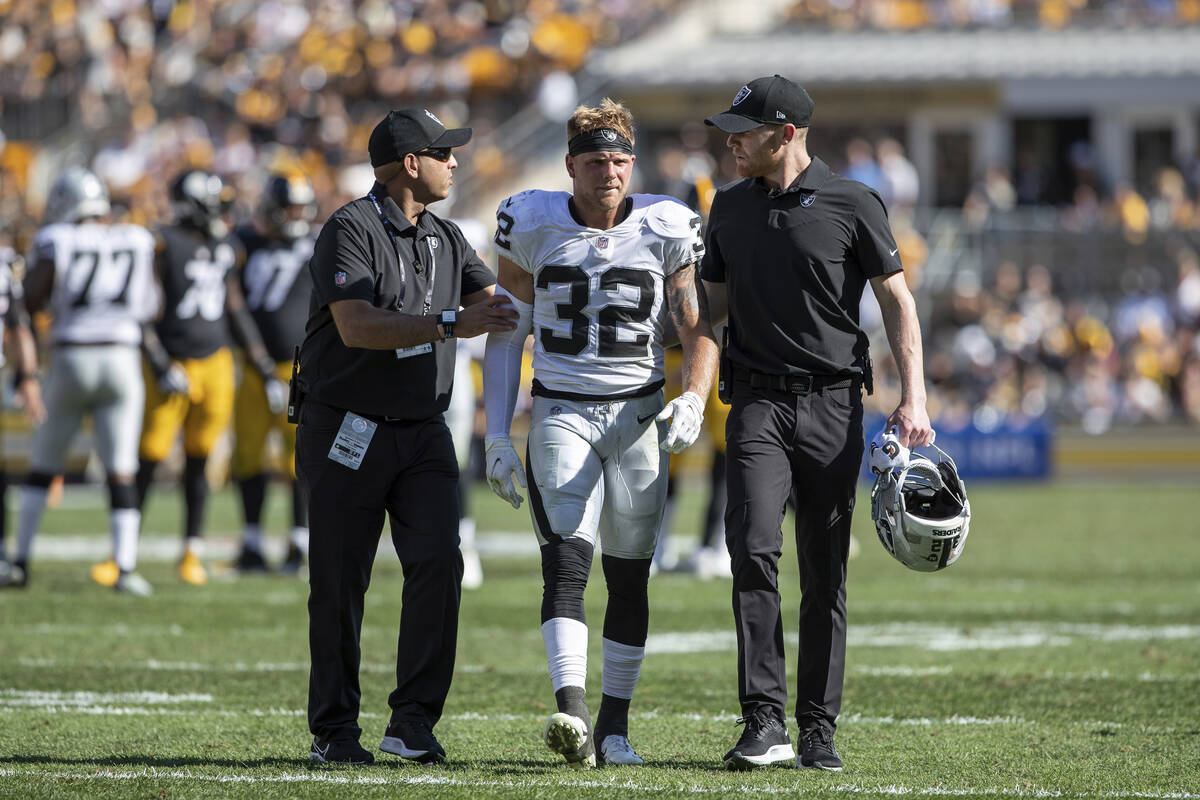 Las Vegas Raiders defensive back Dallin Leavitt (32) walks off the field after being injured during an NFL football game, Sunday, Sept. 19, 2021 in Pittsburgh. (AP Photo/Matt Durisko) 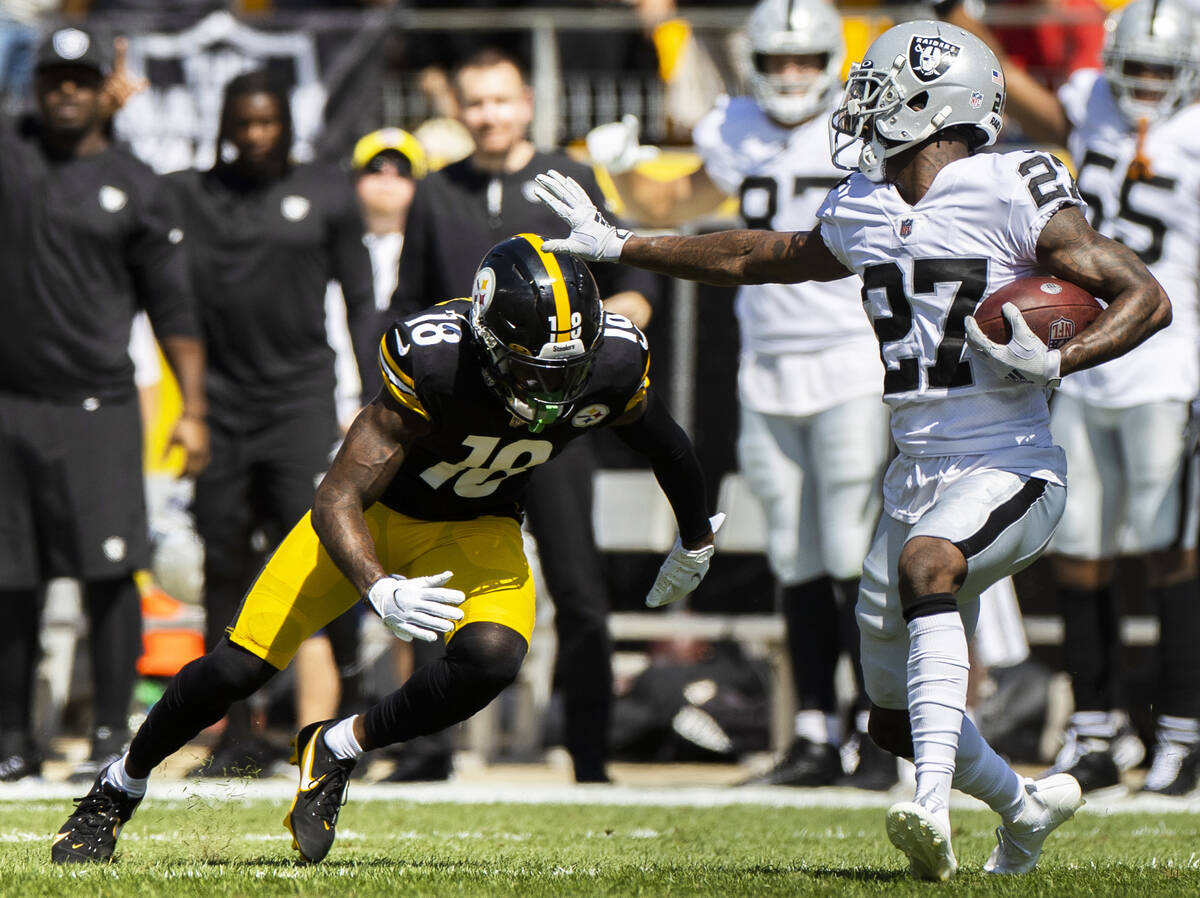 PITTSBURGH — Jon Gruden hearkened back to some serious Raiders history Sunday afternoon: “George and Jack would be proud of some of those hits — the legal hits,” he said.

Gruden was answering a question regarding his team’s defense, which again played a major role in an early-season victory.

The Raiders beat Pittsburgh 26-17 before 63,707 at Heinz Field to begin the season with consecutive victories.

“I thought we flew around and made some tremendous plays,” Gruden said. “The rush was pretty good. For the most part, we got them off the field in key moments.”

This is what the Raiders envisioned when hiring Gus Bradley as their defensive coordinator — a side that attacked from the front and tackled with abandon and covered up on the back end.

This is what they deemed possible when signing several players coached by Bradley at previous stops. New faces. New scheme. New attitude.

“It feels good, but we know we have to keep going and finish and just keep getting better,” said cornerback Trayvon Mullen, who had six tackles and an interception Sunday. “We have guys who love the game and have a sense of urgency.

He was a first-round pick by the 49ers in 2017 who tore his ACL in Week 2 of last season. San Francisco declined to pick up his fifth-year option, so Thomas signed with the Raiders in March.

He also had the first two-sack game of his career Sunday, a needed effort with end Yannick Ngakoue (hamstring) hobbling.

“It felt amazing and good to be back coming off the ACL,” Thomas said. “I think we have been moving toward this since OTAs — grinding away, getting close to each other, building things up. Starting a season 2-0 is huge. Just want to keep stacking those wins.”

The Steelers became so frustrated with not moving the ball consistently, guard Trai Turner was ejected for spitting at a Raiders player. In response, Thomas stepped in and was flagged for unsportsmanlike conduct.

“I’m going to protect my guys,” he said.

The Steelers were 5-for-12 on third down and gained more than 5 yards per snap, but the lack of any running game made it easy for the Raiders to pressure Pittsburgh quarterback Ben Roethlisberger (27-for-40, 295 yards, touchdown, interception) from the outset.

“I love when our defense is on the field,” said Raiders tight end Foster Moreau. “Rally tackling, and a trust and belief in each other. I’ve played with some good defenses in college (at Louisiana State) and we’ve had some good spots here. But it’s awesome to see these guys right now. They come out and shine.”

Just like Atkinson — who was at the game — and Tatum once did.

Not near that level, of course. But one not seen from the Raiders in some time.