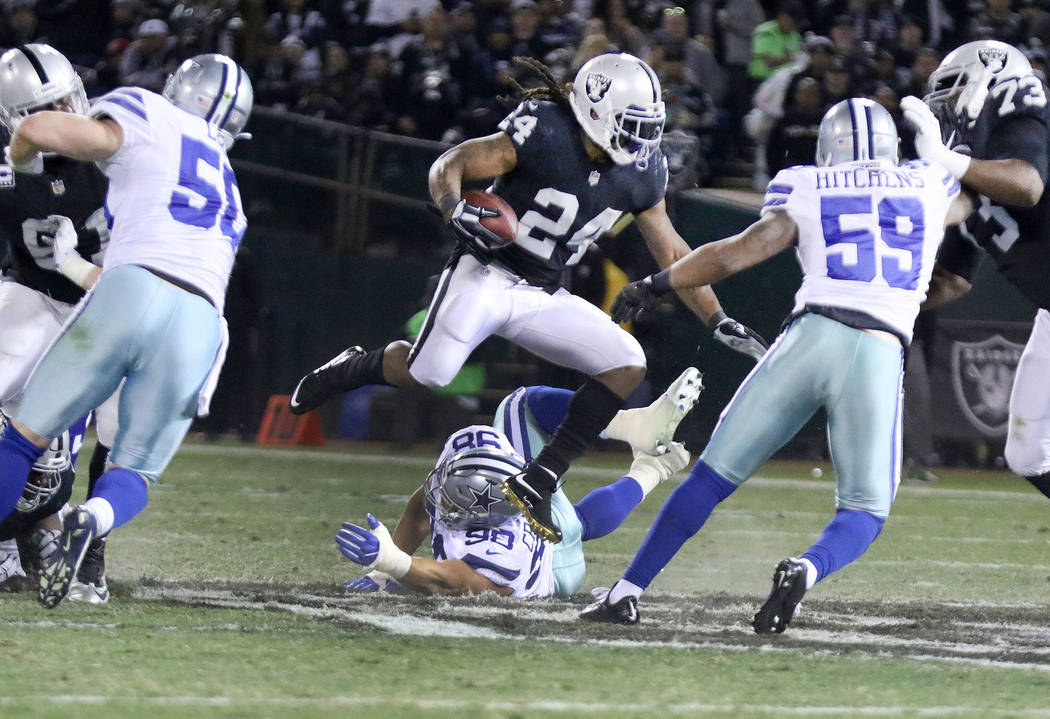 Oakland Raiders running back Marshawn Lynch (24) hurdles over Dallas Cowboys defensive end Tyrone Crawford (98) as he runs with the football during the first half of a NFL game in Oakland, Calif., Sunday, Dec. 17, 2017. (Heidi Fang/Las Vegas Review-Journal) @HeidiFang

OAKLAND, Calif. — This is what happens when the Dallas Cowboys come calling:

Sunday night, for the first time this season at a Raiders home game, a Spanish-speaking radio team broadcast live along press row, which is always an interesting dynamic because even standard plays sound more exhilarating.

If you’ve never heard a basic off-tackle run for 3 yards in Spanish, you really haven’t lived.

The confusion for most of us not fortunate to understand four quarters of such thrilling exchanges made sense, though.

There is absolutely no practical way to explain what happened at Oakland-Alameda County Coliseum, much less with the Raiders this season.

Forget any New Math that hasn’t yet officially eliminated them from the playoffs, because in losing to Dallas 20-17 in a most incredible and bizarre fashion, far too many implausible outcomes remain to even wonder about a second straight postseason appearance.

Think about it: For the Raiders to make the playoffs as a final wild card berth, they would need to finish in a four-way tie at 8-8 with Miami, Tennessee and Buffalo, along with Baltimore finishing at least 9-7.

Boy, I sure would like to hear those Spanish broadcasters announce that scenario should it miraculously occur. They would make ordering lunch sound fun, never mind that sort of lunacy.

It’s how it should be for the Raiders, really, because in no way should you be this inconsistent over 14 weeks and expect to be in a serious hunt for playing in January.

The Raiders, now 6-8 and more up-and-down than some kid playing on a parent’s fitness ball, again teased their fans enough Sunday to believe they are better than what the truth suggests.

They haven’t been since very early this season.

Think about it: The first quarter ended, and Dallas had run 22 plays for 148 yards. The Raiders had 7 yards on just six plays.

How, for the second straight week of playing games that would ultimately decide their playoff fate, could the Raiders come out so preposterously flat?

You’re not a playoff team when you have three touchdowns called back in a game decided by three points, one for pass interference and another for holding and another when a player was deemed down by contact.

The latter wasn’t Sean Smith’s fault after his interception of a Dak Prescott pass. The other two absolutely fall on the shoulders of Jared Cook and Xavier Woodson-Luster.

You’re praying to be a playoff team when you need things like this to go your way and they don’t: On the game’s second biggest play, the Cowboys went for a fourth-and-1 at their own 39 in a tie game with 4:49 left, and won a measurement when officials used an index card to verify the spot.

Which really makes me wonder if the guys in striped shirts have gone back to school and use media timeouts to study for the ACT.

You’re not a playoff team when your starting quarterback, who played an inspired second-half to rally your team and place it in a position to win, is headed toward a game-winning touchdown run on the game’s biggest play with under 40 seconds remaining. He then dives for the pylon and fumbles out of the end zone, signaling a touchback and handing possession back to the Cowboys.

Who promptly took a knee and ended what was a crazy, crazy game.

Derek Carr lay on the Coliseum turn after that football squirted from his grip, holding his helmet in his hands and undoubtedly understanding the impending consequence.

That the call would be upheld and Dallas would take over and not even New Math could now save his team from its inevitable conclusion.

That the Raiders just weren’t good enough, not Sunday, not for most of 14 weeks.

Carr would complete 21 of 38 passes for 171 yards and a pair of 2-yard scores to Michael Crabtree, looking for much of those final 30 minutes like the Carr before this year’s Carr, like the guy who was in MVP talks last season.

But neither he or his offensive teammates or a defense that saw a change in coordinators or even a special teams unit that had its share of big-time blunders Sunday (see a fake punt by Dallas that led to a touchdown and the hold by Woodson-Luster that nullified a kickoff return for a score) have executed well enough for long stretches.

I’m not sure most of what those Spanish broadcasters from Dallas said Sunday, although it seemed everyone in a helmet on each snap had some sort of “busca” issue, as scanning the field became a popular theme.

I am sure, however, of one fact not lost in translation: The Raiders weren’t good enough, haven’t been for a while now, and you don’t need any index card to see it.