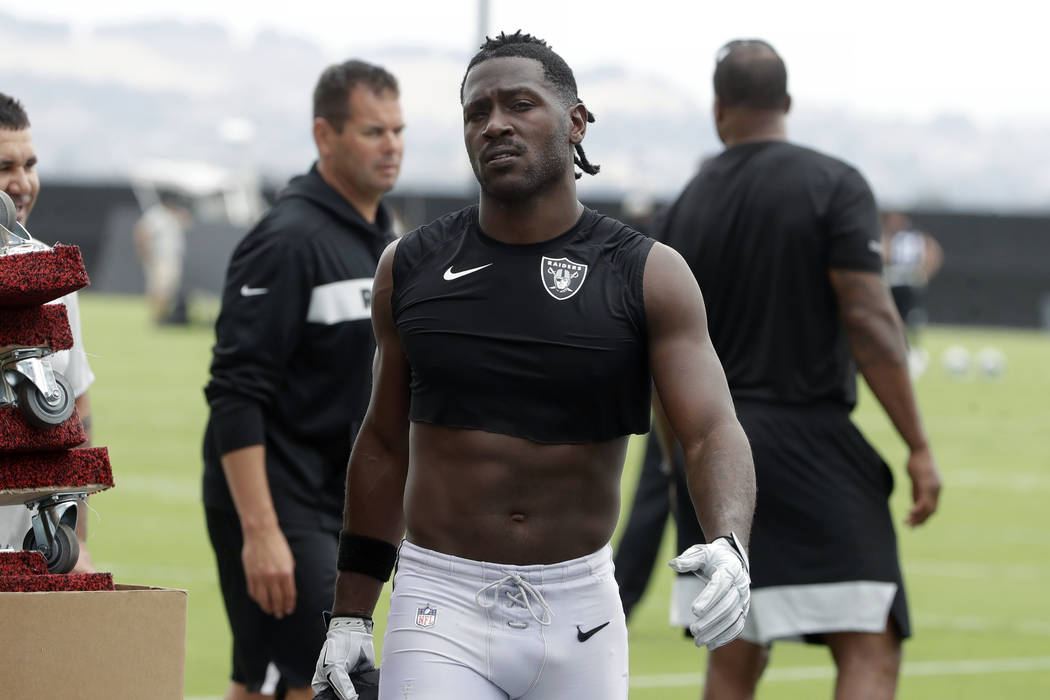 Oakland Raiders' Antonio Brown walks off the field after NFL football practice in Alameda, Calif. on Aug. 20, 2019. Coach Jon Gruden says star receiver Antonio Brown is back with the team and is expected to play the season opener on Monday, after a run-in with general manager Mike Mayock put him in jeopardy of being suspended. (AP Photo/Jeff Chiu, File)

The only surprising part is that anyone would feign surprise, that what transpired between the Raiders and wide receiver Antonio Brown the last few days is nothing but a reaffirmation of a truth long understood.

Winning in professional sports — or at least the opportunity to do so, however slight those chances might be for the Raiders this season — is more important than anything not named breathing.

And yet if it meant trading some lung capacity for a deep playoff run, well, who doesn’t think Jon Gruden wouldn’t fit himself for an oxygen machine?

Comparing what happened with Brown to the reality of the population at large is a useless exercise. Athletes, the very best of the best such as Brown, are a unique species whose actions are not bound by the same consequences as most everyone.

They’re not us, we’re certainly not them, and each side has its own set of rules.

So when Brown confronts general manager Mike Mayock with a tirade that reportedly includes a racial slur and threatening to punch him in the face — actions that would assuredly lead to a firing in most any other profession — the fact that Brown wasn’t then suspended and isn’t expected to miss any game time shouldn’t draw even a blink of amazement.

And how did he react when the only team discipline was reportedly an undisclosed fine?

He posted a video Friday night across social media in order to “control (his) own narrative.” It included what appeared to be a recorded conversation with Gruden, who asks Brown to “please stop this (bleep) and just play football.”

ESPN reported that Gruden was “amused” with the video and thought it was “awesome.”

See, none of this is real life. It’s fantasy. It has been since exorbitant amounts of money and fame became defining components of pro sports, since the jobs of so many relied on either a person sitting in the next locker or the team you happen to be coaching.

But the blowup by Brown, and countless more unhinged acts across sports in which it becomes obvious responsible behavior isn’t a required trait for athletes to be employed and richly compensated, does allow for the rest of the world to make a decision about whether to support such industry.

We have a choice, and it’s obvious where the majority lies.

TV ratings for the NFL continue to decline, but the league remains a monster in terms of global interest. Folks are still purchasing merchandise and tickets at incredibly high levels, still wagering a fortune on games, still genuflecting at the altar of their next fantasy draft.

Which is all fine and good, but it shouldn’t result in any bitterness from fans when the next player runs afoul of either the law or common decency.

In other words, don’t feign surprise.

Think about Friday. Chiefs wide receiver Tyreek Hill — who spent his summer denying charges in relation to an audio in which his then-fiancee accused him of hurting their 3-year-old son and then recorded Hill threatening the woman — was awarded a three-year contract that includes $35 million in guaranteed money.

Nothing to (ever) see here.

Brown was apparently emotional when apologizing in a team meeting — hey, when you’re about to lose a guaranteed $30 million, you’re going to ratchet up some tears if it takes a bushel of onions to do so — and later denied to a reporter that the interaction with Mayock on Wednesday included any racial words or threats.

So, what, they told him to stay away from the facility Thursday so he could catch more footballs in his swimming pool?

I’m sure team captains had a say in Brown being able to play Monday, because it’s on them to control the locker room and create a positive atmosphere. They also know how great a player he is. The latter usually wins out.

Character doesn’t matter, no matter how much Gruden or Mayock or any official from 31 other teams preach about it. Many believe Brown is in need of serious counseling, and by continuing to support him and look the other way on his unacceptable actions, the Raiders are trying to ensure he gets needed help.

I just wish we had a third-string wide receiver to gauge this theory other than a Hall of Fame player.

The only thing we learned Friday is what we already knew: They’re not us, we’re certainly not them, and each side has its own set of rules.

And winning, even the slightest chance at it, means everything.