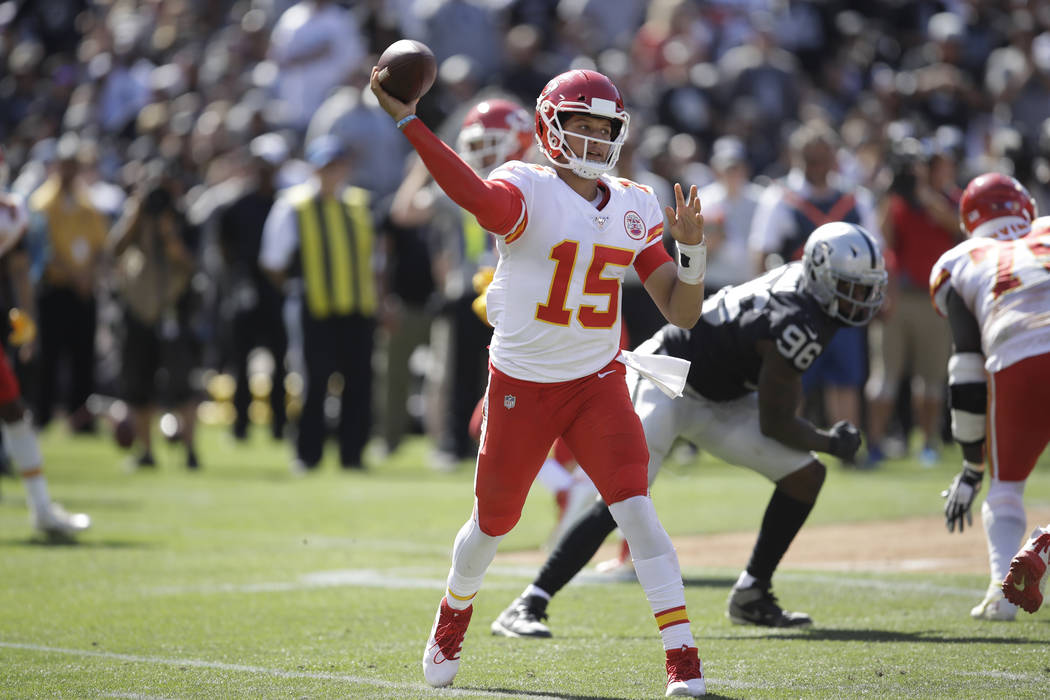 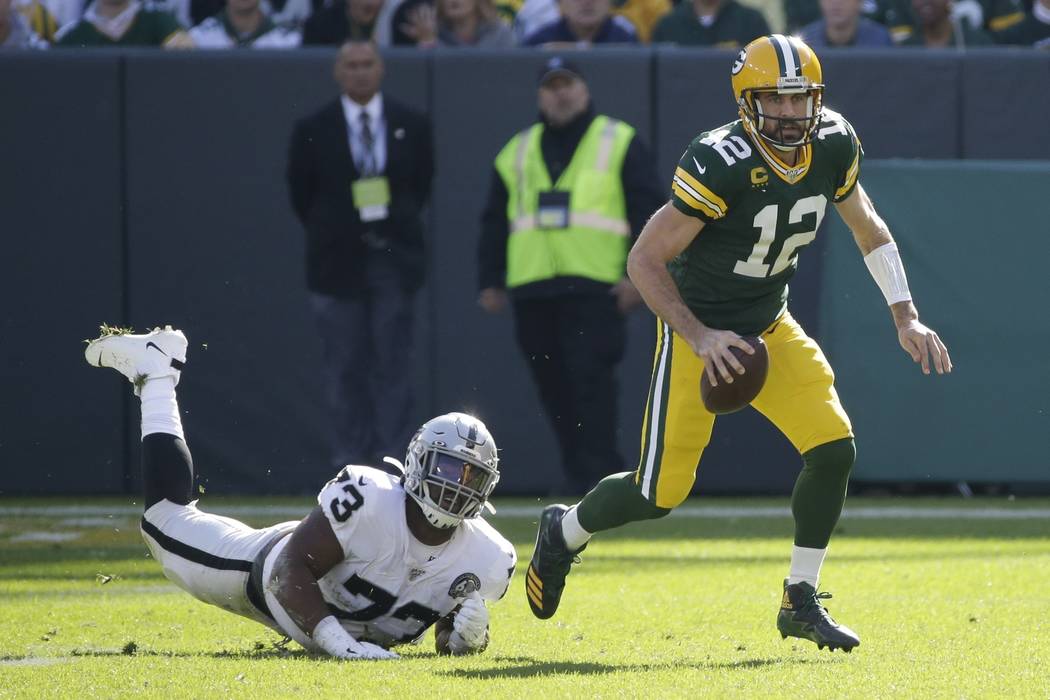 Green Bay Packers' Aaron Rodgers gets away from Oakland Raiders' Maurice Hurst during the first half of an NFL football game Sunday, Oct. 20, 2019, in Green Bay, Wis. (AP Photo/Mike Roemer) 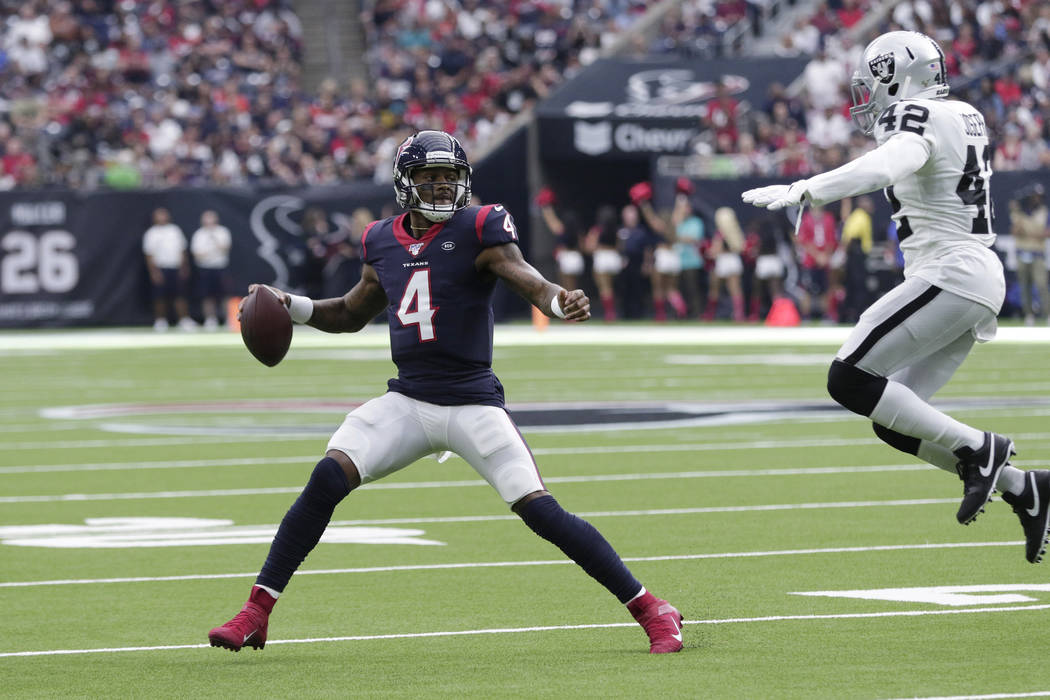 OAKLAND, Calif. — Tahir Whitehead is convinced it hasn’t been the other guys, that the issue exists within his own huddle.

I suppose that’s possible, and yet it doesn’t alter the narrative: That when the Raiders have faced some of the NFL’s better quarterbacks this season, the balance of power has shifted dramatically to those completing passes.

“We just have to play our game,” said Whitehead, the eight-year linebacker. “And in games where we’ve, as you call it, played against the top echelon quarterbacks — it’s not a matter what they’ve been able to do, it’s more our lack thereof.”

Which is to say a lack of everything.

The Raiders haven’t been good defending elite on the opposite line of scrimmage, with another opportunity awaiting when the Lions visit Sunday.

Oakland plays its first home game since Sept. 15, and standing in the way of a 4-4 record and continuing talk of remaining in a playoff race at the midseason point is Detroit quarterback Matthew Stafford.

All he has done is produce his best season as a pro.

Whitehead is not mistaken in that it takes two to tango in the world of dominating quarterback play, the guy standing under center and the 11 trying to stop him.

Names such as Patrick Mahomes and Aaron Rodgers and Deshaun Watson have been the ones leading when the music begins.

In wins against the Raiders, the three combined to complete 82 of 114 passes for 1,151 yards with 12 touchdowns, no interceptions and an average rating of 134.9.

That’s all kinds of ridiculous.

Those losses to the Chiefs, Packers and Texans were about, as much as anything else, the Raiders not being able to pressure the pocket or communicate and cover much on the back end.

Yeah. I know. Saturday morning at the junior varsity game.

There is also this: They have just three interceptions, and two came against the Bears in London, when Daniel seemed to be aiming for Westminster and instead hit Dublin.

“The (quarterbacks) have been kind of different,” Raiders defensive coordinator Paul Guenther said. “(Watson) did a lot of stuff with his legs. Rodgers, obviously, can throw off different platforms. Mahomes is a different animal, too. So it’s really each week and what the systems are and what they do within the systems.”

It doesn’t help that the Raiders are woefully thin at linebacker, have lacked any consistent push from the edge and start rookies on the line and at cornerback.

One way to ensure opposing quarterbacks don’t generate numbers comparable to your neighborhood Madden 19 champion is to keep them on the sideline, something the Raiders also haven’t done in four losses.

So here comes Stafford in his 11th season and on pace for career highs in several passing categories, already with a touchdown-to-interception ratio of 16 to 4.

Stafford is more like Kurt Cousins of Minnesota — which beat the Raiders 34-14 to begin the five straight games away from Oakland — than Mahomes or Rodgers or even Watson, meaning he can fluctuate between really good and at times average.

There just haven’t been many of the latter efforts for the Lions this season.

“Well, (Stafford) is feeling it right now, no question,” Raiders coach Jon Gruden said. “He doesn’t get fooled often. If you blow a coverage, he shreds you. If he sees a blitz, he throws it to his hot receiver or he fixes it and changes the play. He’s sharp. His experience is very, very valuable to their success and he plays with a really quick tempo.”

The Raiders follow Sunday with a short week before hosting the Chargers and quarterback Philip Rivers on Thursday. It’s also expected Mahomes will have returned from injury before Oakland plays at Kansas City on Dec. 1.

It means elite hasn’t been totally expunged from the schedule.

It means the Raiders better start dealing with it a whole lot better than they have.