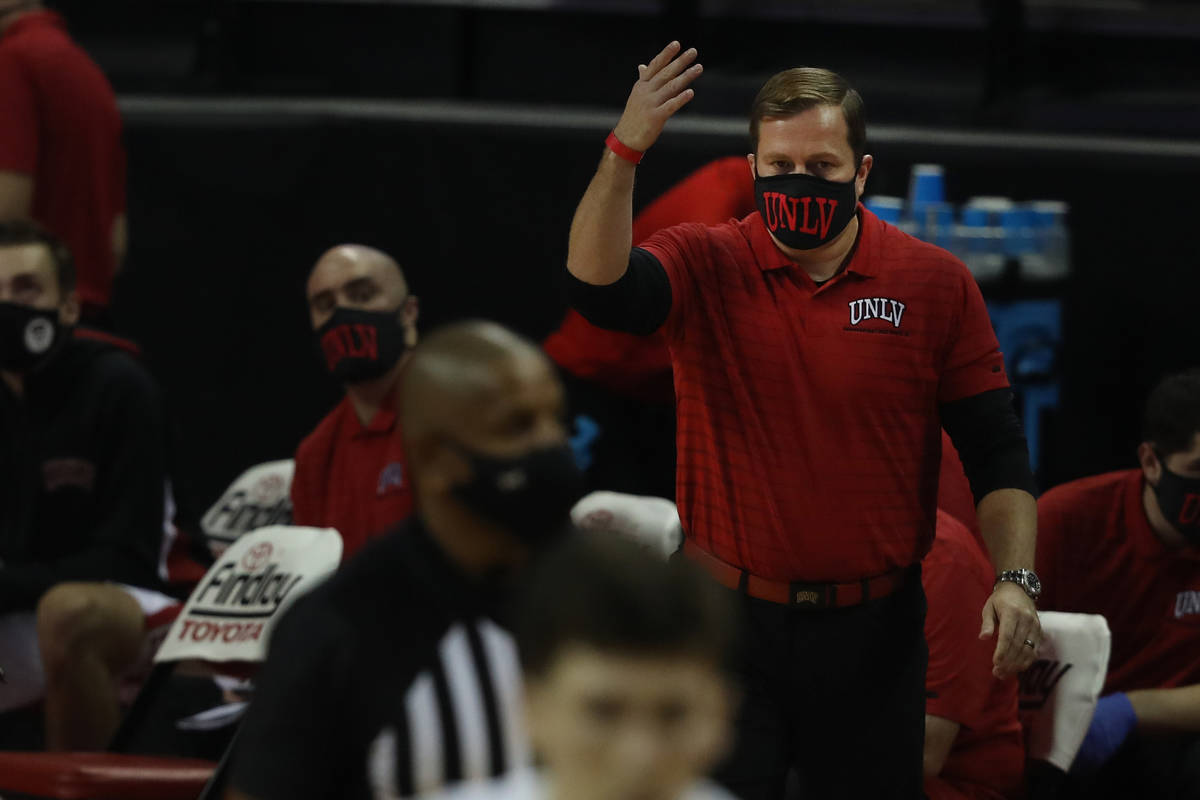 UNLV Rebels head coach T. J. Otzelberger reacts after a play against Montana State Bobcats during the first half of the season opener at the Thomas & Mack Center, on Wednesday, Nov. 25, 2020, in Las Vegas. (Elizabeth Page Brumley/Las Vegas Review-Journal) @Elipagephoto

Let’s be honest: Had it a choice, at least one of those cardboard cutouts of a dog would have left at halftime. Probably all of them. The one of a bird would have flown away sooner than that.

UNLV stayed with not-so-mighty Montana State out of the really-not-so-mighty Big Sky Conference for about 15 minutes Wednesday night before things like forgettable shot selection and not being able to guard anyone and never getting to the rim painted an inevitable fate.

The Rebels lost 91-78 at the Thomas & Mack Center to open their second season under coach T.J. Otzelberger before a few invited guests, university officials, assembled media and those 60-plus cutouts.

Many of the latter appeared to have their eyes closed most of the evening.

Or at least should have.

(Does that cost extra?)

UNLV tried to make it a standard beginning. It rolled out the red carpet and shot off fireworks and played the fight song. A strobe light circled the arena long enough to illuminate those fake fans watching as UNLV’s starting lineup was introduced.

Welcome to the surreal pandemic scene of college basketball, 2020.

And then the game tipped off, and things went from bad to ugly for UNLV. It couldn’t have played a worse first half. I mean, for its sake, it better hope not.

“Quite frankly, I’m embarrassed by it,” Otzelberger said. “I wish we could practice right now to get it right. It’s disappointing … Our effort and energy and competitive spirit wasn’t where it needed to be.”

Nick Blake might have been one bright spot for the Rebels, the freshman finishing with 16 points in 22 minutes. It was also the debut of junior point guard David Jenkins Jr., the transfer who followed Otzelberger to the desert from South Dakota State.

A rough night for Jenkins: seven points, 2-of-9 shooting, 1 of 5 on 3s, four rebounds, three assists, fouled out. He couldn’t create much separation. Couldn’t get to the rim. No one did with consistency.

Bryce Hamilton scored a game-high 27 points for the Rebels, who mostly had the junior standout and Jenkins try to create out of motion offense. Not a whole lot else was run.

Happens all the time each November.

Happens all the time throughout each season.

Don’t get me wrong. This was bad. Really bad in spots. The Rebels couldn’t stay in front of the cardboard cutouts defensively, never mind actual moving humans. They played with such little emotion. Such little desire to make a serious push when falling down big.

But they should give a much improved effort against No. 16 North Carolina in a first-round game of the Maui Classic on Monday in Asheville, North Carolina.

That’s where UNLV heads now. Three games in three days against opponents a whole lot bigger and stronger and better than Montana State.

“We gotta get better, simple as that,” junior guard Marvin Coleman said. “It’s back to the basics. We’ve all been playing basketball for a very (long time), and at some point in time, there weren’t any fans or as much excitement in the gym. That’s no excuse. There is no excuse for us to lose on our home court in our first game. We’re going to take this on the chin and get back to work.”

There’s a whole lot of it to do.

The cardboard dogs were barking Wednesday night, and not for liking what they saw.