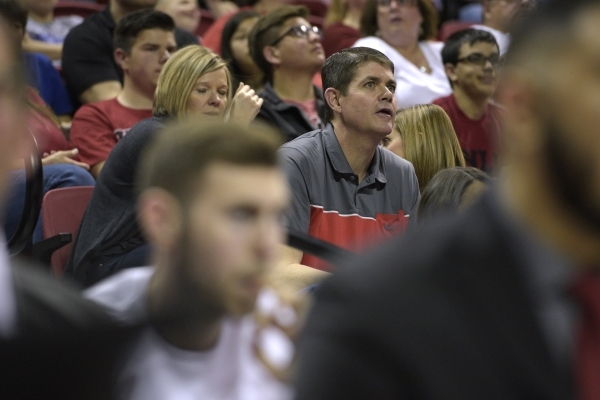 On the January evening Dave Rice was fired just three games into the Mountain West schedule, as unprecedented a move as you will find in college basketball, he looked UNLV’s seniors in the eyes and promised they would see him again.

That he would be there to celebrate their careers on Senior Day.

That he would be present when they played their final regular-season game at the Thomas & Mack Center.

Zero is a tough number to gauge, but in a college world in which few firings are followed by amicable feelings between the involved parties — especially the guy who was bounced in a situation that was dishonestly described by those doing the bouncing as a mutual parting of the ways — Rice on Saturday did something you would hardly ever witness at this level.

At any level, really.

He kept his promise and attended UNLV’s game against Wyoming with wife Mindy, one that saw the Rebels receive contributions from several players in a 79-74 victory before an announced crowd of 12,412.

If those in charge, which we assume include a few who will lead the search for UNLV’s next coach, have taken time to notice the sparse gatherings at three of the past four home games, they should understand a statement is being made with all those empty red seats:

Don’t mess this up.

For once, strive to be big time.

The Rebels play their final regular-season game at conference champion San Diego State on Saturday, then probably will enter the league tournament as the No. 6 or 7 seed the following week at the Thomas & Mack. Such placement — although New Mexico is doing everything it can to possibly afford the Rebels a top-five finish — would mean needing to win four games in four days to claim the Mountain West’s automatic berth into the NCAA Tournament.

What will be the league’s only berth, for that matter.

“It’s a very special day for a special group of seniors,” Rice said. “When we recruited them, our commitment was that these would be lifelong relationships. Senior Day is very exciting. Mindy and I were there to support the seniors and the team. Those seniors worked very hard last spring and into the summer and had very big plans for this season. It was good to see them play as a team.”

What he saw was two of those seniors — Jerome Seagears and Ike Nwamu — play pivotal roles in the win. Seagears made three 3-pointers to open the game, then made the most important one of it, giving UNLV the lead for good at 65-62 with 3:45 remaining. He finished with 18 points in 24 minutes, a solid outing in a season in which the Rutgers transfer struggled for long periods to give consistent play at point guard and has hobbled to its final stretch with a bad heel and injured hand.

“It was great to see Coach Rice,” Seagears said. “To know he came into this environment and felt OK about it meant a lot. Definitely, not a lot of coaches would do this. I’ve talked to him over texting, and he kept telling me he would be there for Senior Day.”

Nwamu also scored 18, a fifth-year transfer from Mercer who, like all Rebels, couldn’t have imagined his lone season in Las Vegas would play out as it has, one that now has UNLV at 17-13 overall and 8-9 in conference.

“Both Jerome and Ike are extremely loyal young men,” Rice said. “Jerome is a great leader. He loves people, and his enthusiasm for life is infectious. We used him to recruit new guys. He’s the Pied Piper. When you’re a captain during a redshirt season and before you ever play a minute for a program, that speaks volumes for his leadership.

“Ike is just a relentless competitor who was very excited to play at UNLV. He was an accomplished player who was very well coached at Mercer. And (senior walk-on) Barry Cheaney is the consummate team player and extremely popular with his teammates.

“It was just a very good group, and it was great for Mindy and I to be there supporting them.”

What he wouldn’t say because, well, it’s just not him: It was excruciatingly difficult to walk into an arena as a former player and head coach, a program in which he was a member of the school’s national championship team, who was dismissed during a season having not been accused of breaking rules or embarrassing the program in any manner over four-plus seasons, instead an incredibly respected member of the UNLV family.

Coaches who were fired in the manner and timing and bizarre behind-the-scenes circumstances Rice was don’t return for Senior Day to support players and catch up with their families.

That person would rather be 1,000 other places.

“Surprised?” Seagears said. “No way. Not at all.

“It shows you the type of man he is.

“It shows you how much he really cares about and loves his players.”

This is Dave Rice.