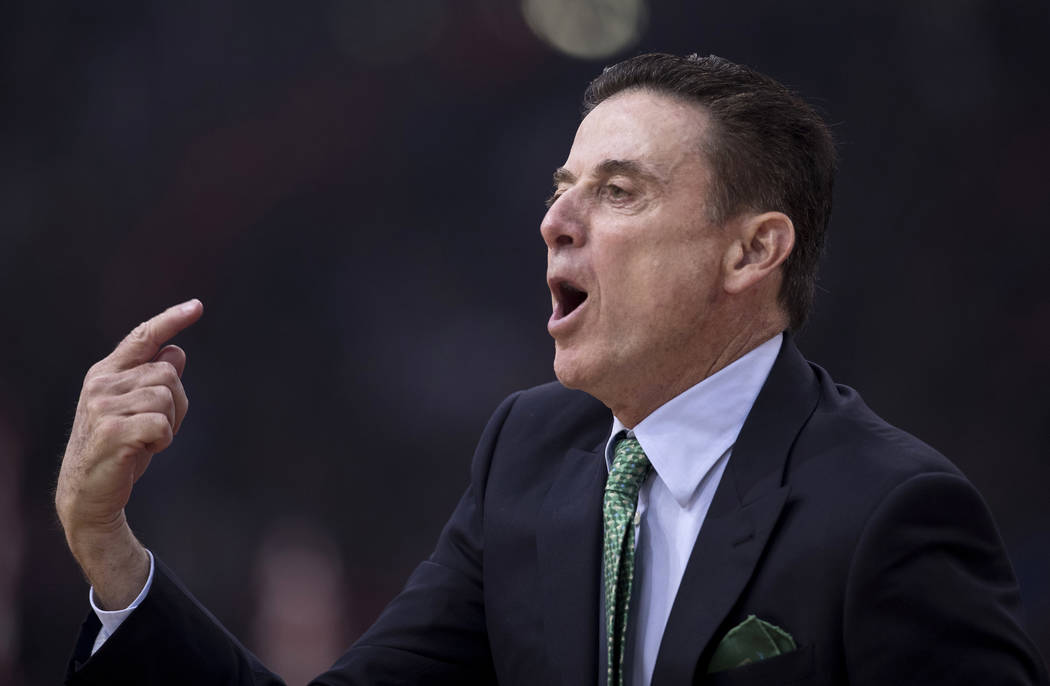 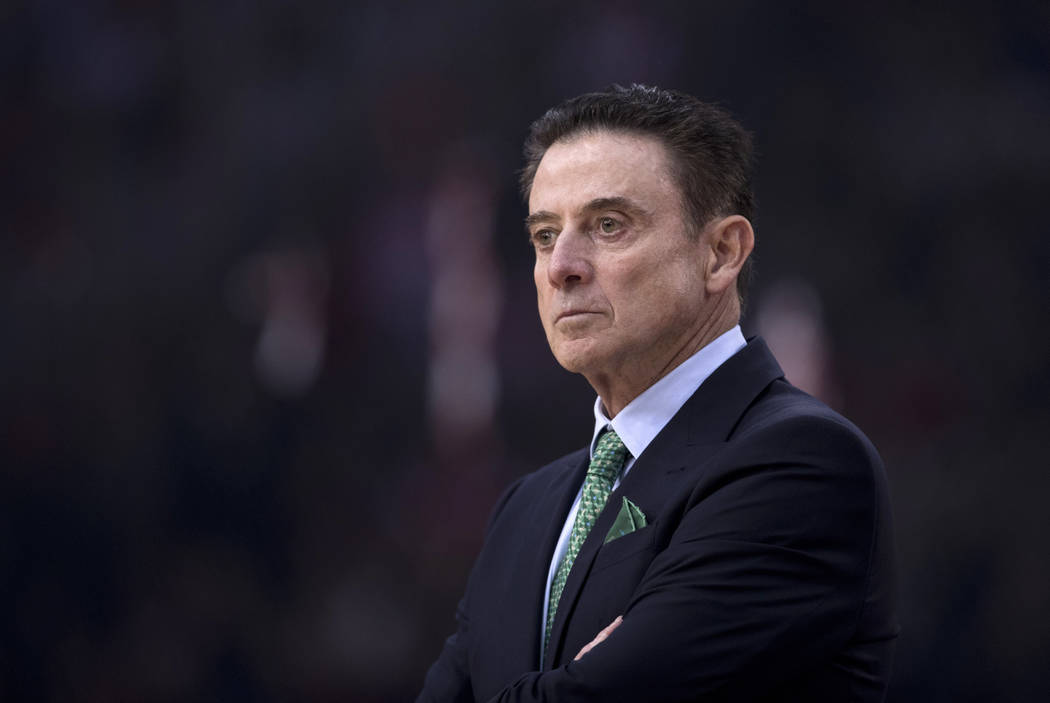 Panathinaikos coach Rick Pitino looks on during a Euroleague basketball match between Panathinaikos and Olympiakos in Piraeus near Athens, on Friday, Jan. 4, 2019. (AP Photo/Petros Giannakouris) 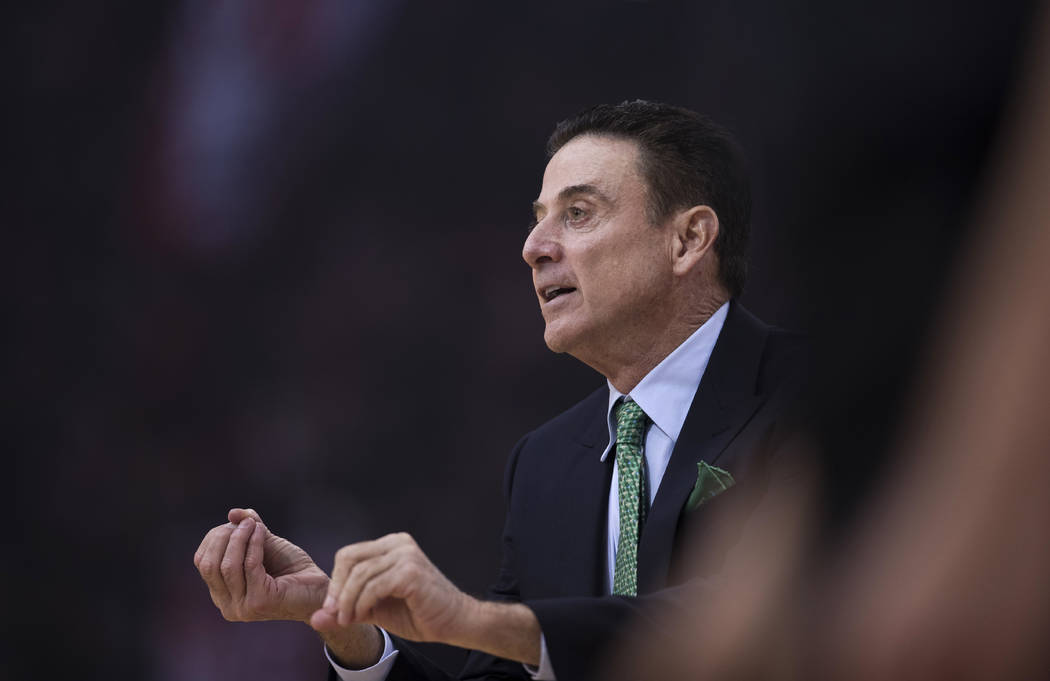 Panathinaikos coach Rick Pitino directs his players during a Euroleague basketball match between Panathinaikos and Olympiakos in Piraeus near Athens, on Friday, Jan. 4, 2019. (AP Photo/Petros Giannakouris) 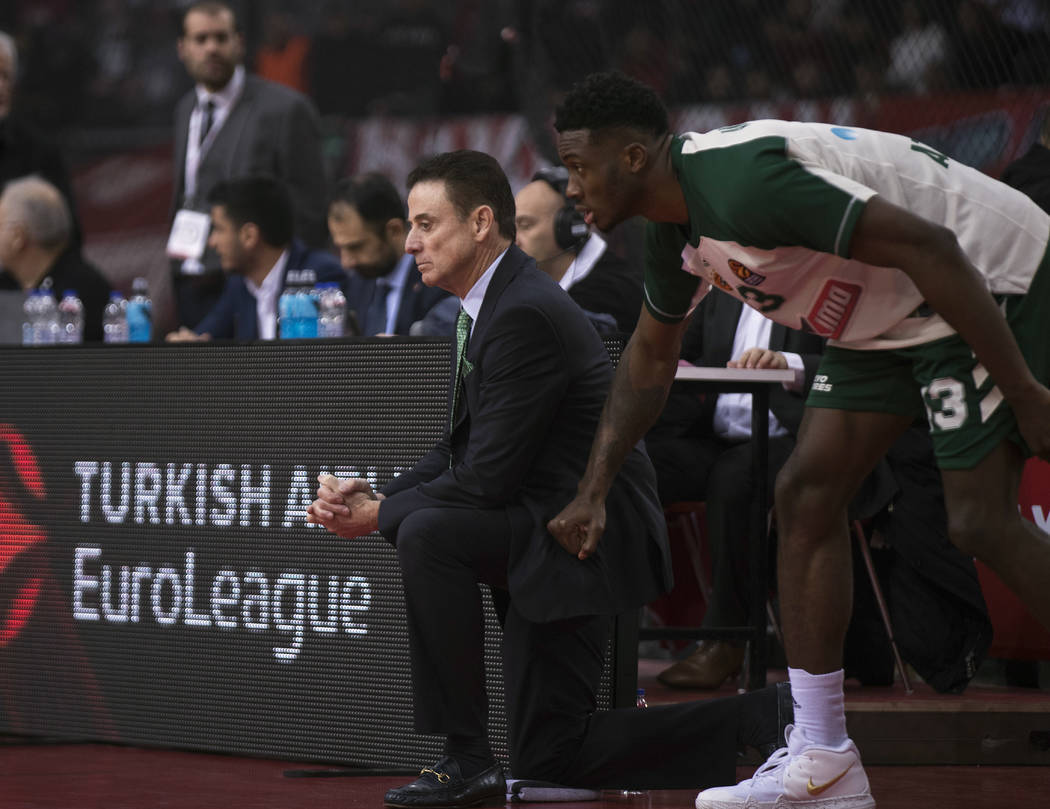 Panathinaikos coach Rick Pitino, left, looks on next to player Thanasis Antetokounmpo, right, during a Euroleague basketball match between Panathinaikos and Olympiakos in Piraeus near Athens, on Friday, Jan. 4, 2019. (AP Photo/Petros Giannakouris) 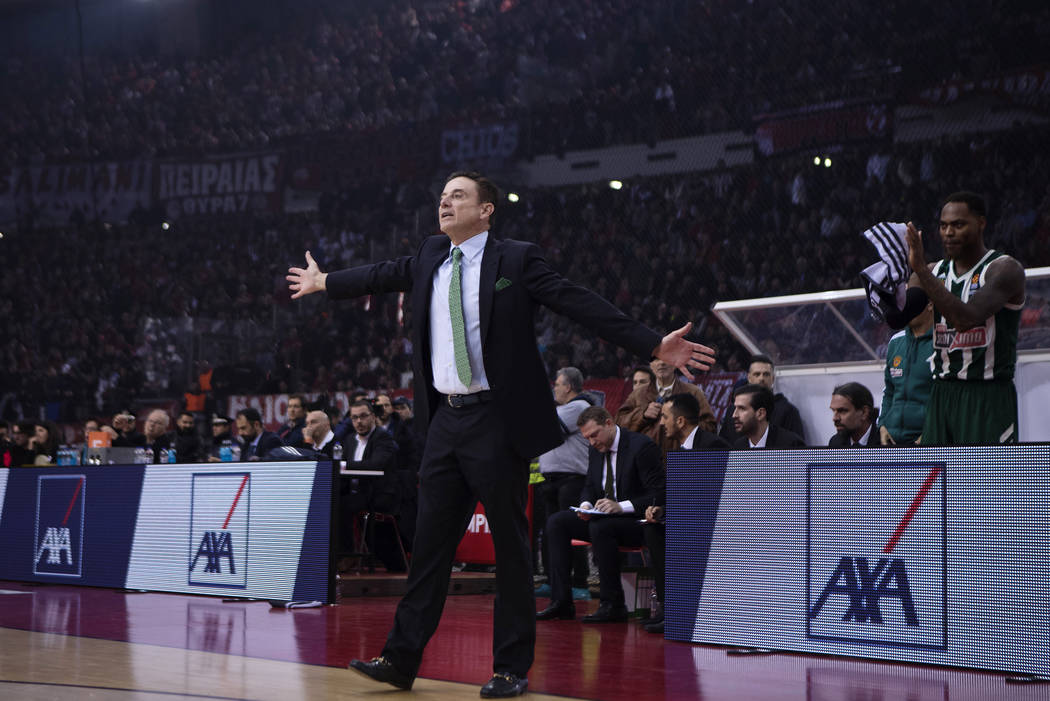 The two basketball coaches, still the closest of friends who refer to each other as brothers, were having one of their regular phone chats a few days ago.

Rick Pitino: “Hey, what is all this business people are telling me about UNLV?”

Marvin Menzies: “I guess there is social media talk in Las Vegas throwing around Pitino to UNLV.”

Rick Pitino: “What! Where did that come from?”

And then they laughed for five minutes.

It’s not happening now because it never was then, the idea that Rick Pitino (not his son and University of Minnesota coach Richard) would be negotiating with UNLV — be it administrators or boosters or the like — with the goal of the Hall of Fame coach replacing Menzies.

Which, by the way, would mean UNLV athletic director Desiree Reed-Francois already has decided to move on from her current coach.

Which, by the way, isn’t close to reality.

“I root for UNLV every game,” Pitino, who coached Panathinaikos to the Greek Cup Championship on Sunday, told the Review-Journal on Friday. “I have been a big fan since the Tark days. But now I root for them every game because of Marvin Menzies, a younger brother to me. I, nor my agent, haven’t had any discussions with UNLV about coaching there. I will continue to root for my ex-assistant coach every game. Go, Marvin.”

I’m not about publicly bashing reports or sources or those who float rumors.

Their business. Their decisions. Their ability to do so with no consequences.

I’m actually as culpable in giving the narrative life, writing a column on something I know wouldn’t happen.

But this is UNLV basketball and, despite the sense of apathy that has gripped a program whose last NCAA Tournament appearance was in 2013, it still matters to a ton of folks.

Which means if you were among those who truly gave an ounce of veracity to Pitino talking with UNLV, then you must believe …

■ The same coach who in a conference call with then-athletic director Tina Kunzer-Murphy and top basketball booster Tom Jingoli in April 2016 gave Menzies the highest of recommendations — pretty much told UNLV’s brass to make the hire and allow Menzies time to build a program — is now scheming behind his former assistant’s back to get that same job.

■ That a coach (Pitino) who, over his career time and again, has lauded the talents and friendships of those who worked under him — Billy Donovan, Mick Cronin, Tubby Smith, Herb Sendek, Travis Ford, Menzies at Louisville, just to name a few — has suddenly forsaken all of those statements about the importance of family and loyalty to directly hurt one of those disciples for … a Mountain West job?

“He’s one of my best friends in the business,” Menzies told reporters Friday. “Why would he come and take the job he got me? I know for a fact no one has even talked to him. It’s nonsense. It’s a waste of time …”

Look. Pitino is elite. One of the finest coaches at any level in history. Incredible. His presence alone would fill the Thomas &Mack Center. That’s one part.

But the other — everything else, his relationship to Menzies, the baggage that comes with his resume, the fact that the NCAA still hasn’t determined any possible penalty against him for what occurred at Louisville under his watch — is what makes the idea so preposterous.

This is obvious: Reed-Francois is evaluating Menzies, in his third season, sitting 15-11 overall as San Diego State visits Saturday night. She will be diligent. She will wait until the season is complete to sit with Menzies and discuss every facet of the program. She will not be rushed.

She also really wants him to succeed.

And she is never hiring a UNLV basketball coach with a checkered NCAA past.

There is also this: The current UNLV players didn’t sign to play for Duke, for a sure thing in terms of winning. They signed to play for Menzies, but now a popular belief is UNLV should make yet another change at coach and risk the same mass roster exodus that happened after its last search?

It should blow things up and start all over again?

That’s the answer, fire a guy after just three years (really two when you count the buffoonery of the search that brought Menzies here) whose kids are good students and go to class and have had no off-court or NCAA issues?

Really, from where this massive rebuild began?

How shortsighted is that?

Hey, some things need to change. UNLV must begin playing a far better nonconference schedule. You have to compete against people that will draw. Menzies also must make tough decisions about some players who just aren’t good enough. He needs to find a few new homes and sign better talent. Like now.

I don’t know what Reed-Francois will do. I don’t think she does yet.

But the idea of Pitino talking with UNLV behind Menzies’ back?

It’s not happening now because it never was then.