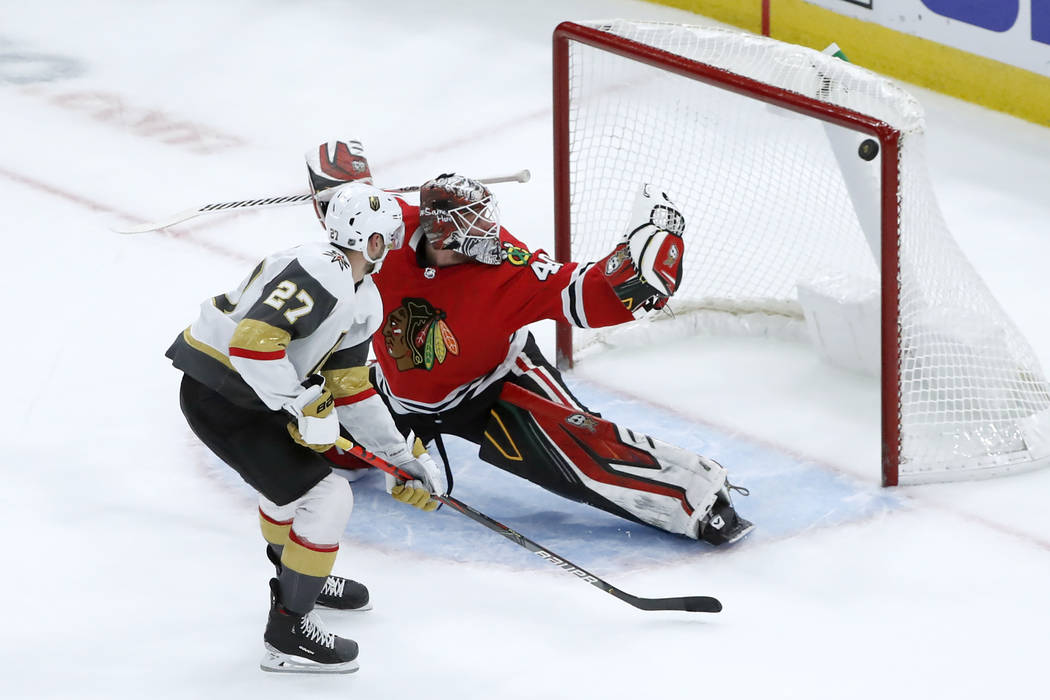 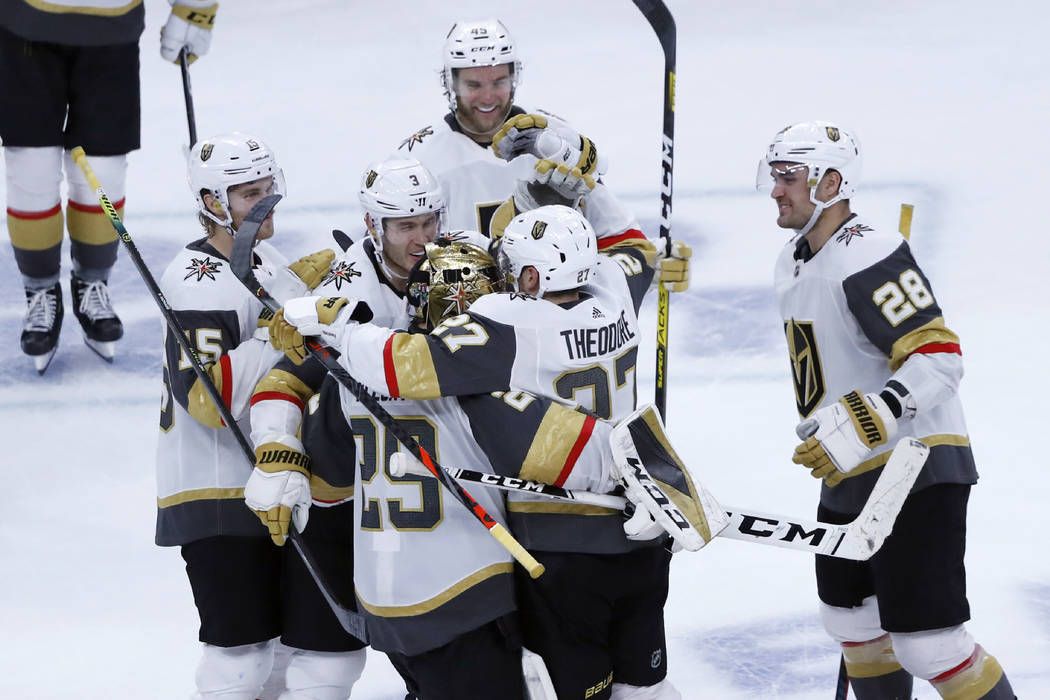 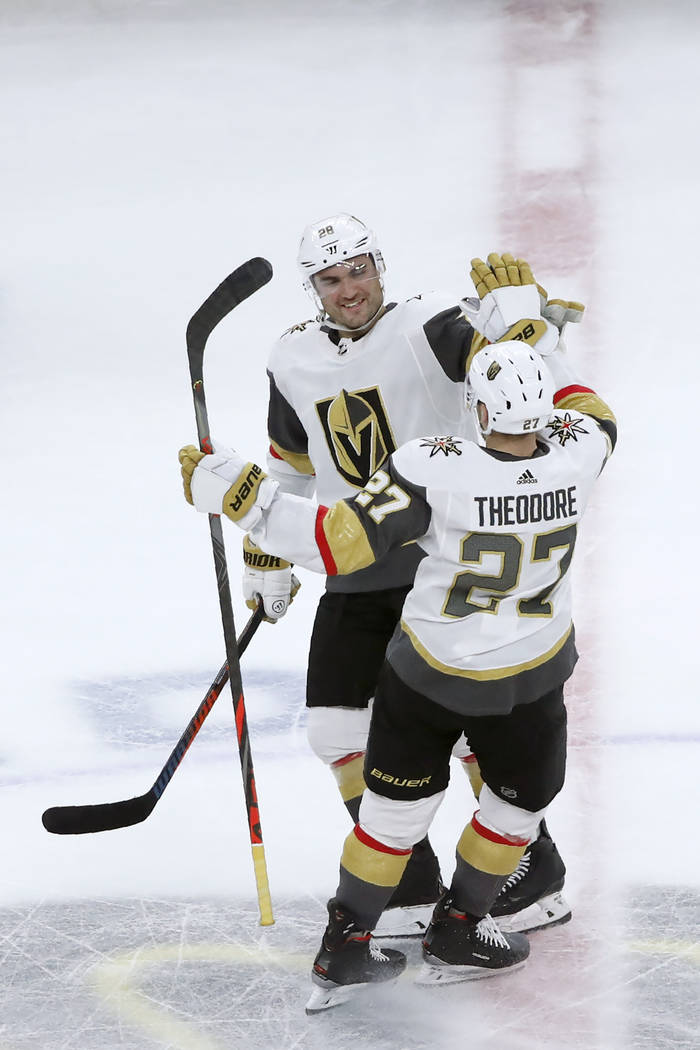 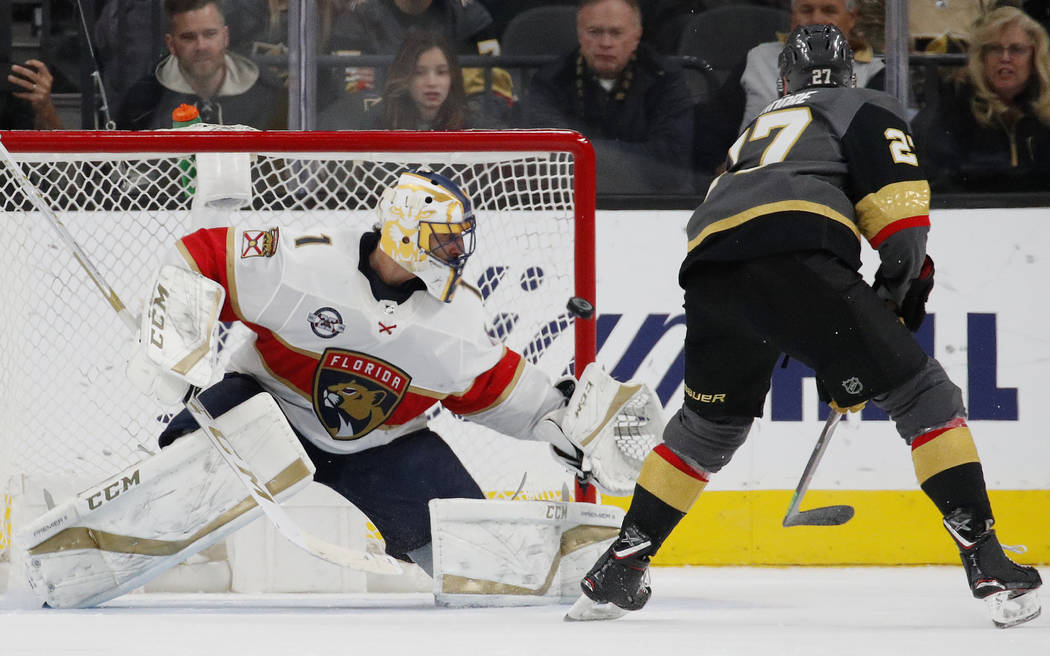 It is as much the shoulder fake as the jab step.

Or is it a jab slide?

Shea Theodore didn’t grow up in Aldergrove, British Columbia — population 15,000, with its claim to fame being where the A&E television series “Bates Motel” is filmed — developing all sorts of deceptive moves across various sports.

He didn’t work on a pump fake for basketball or a scissor drag for soccer or a stop-and-go for football.

Such singular focus on developing an NHL-caliber deke has more and more paid off for him, as the Golden Knights defenseman consistently succeeds in faking goalies out of their flat blades in the team’s pursuit of two points instead of one.

The Knights return to T-Mobile Arena on Friday afternoon to engage Colorado, the Western Conference’s best side early this season.

It’s unlikely things will reach the shootout stage — only 13.5 percent of all games each year do — but should the score remain tied after three periods and five overtime minutes, know that one of three spots in the Vegas shootout order is likely already decided.

“A lot of it is about feel in terms of which guys to use, which ones might have had a good game and are playing with confidence,” Knights coach Gerard Gallant said. “Those things are big for me. But we also rely heavily on the analytics.”

Either way, Theodore gets an attempt.

He scored the decisive shootout goal in a 2-1 win at Chicago on Tuesday and was also successful in a 3-2 victory against Ottawa before the Knights departed on a three-game road trip, each time using the same move to fool goalies Anders Nilsson and Robin Lehner.

Full disclosure: I’m a total geek for this stuff, finding it especially fascinating when a move is so skillful that it works even after it has been scouted and studied on film.

Yeah. I know. Dirk Nowitzki’s step-back jumper was unstoppable for most of two decades.

NHL teams don’t practice shootouts. Not really. You can certainly make the argument there are countless other areas in which to work during practice and morning skates But just know if a division championship is decided by a few points come April, wins like those against the Senators and Blackhawks could mean everything for the Knights.

Basically, guys are pretty much left to master moves on their own.

Like everything, there is history to it. Pavel Datsyuk was a virtual highlight film of shootout goals. Few could top The Magic Man for stickhandling and creativity. Claude Giroux’s move against Toronto. Sidney Crosby kicking his leg back and then roofing a shot under the bar.

Theodore has found success by approaching down the middle and slowing before using a left shoulder fake as a first move and then a left-foot jab. Hope being, the goalie commits to covering his right side and Theodore then beats him with a backhand to the left.

He hasn’t had to hope much, now 5-of-7 on shootout attempts in his young career.

“I’ve been working on it for a while and it seems to be paying off,” said Theodore, 24. “You just try and keep goalies guessing. If they don’t bite on the (first fake), then you have that shot option.”

It’s not just scoring. Of the top 10 all-time spots for most shootout victories for a goalie in a season, the Knights’ Marc-Andre Fleury owns two of them.

He used to watch film of opposing players as a way to gauge shootout tendencies, but then they scored too often on him and he ditched that idea. Now, it’s all about instincts and angles, not being too far out or back, having the patience to study a skater’s body and speed before committing.

“Guys don’t always do the same thing,” Fleury said. “You think something is coming and then they switch up. They all have good hands and are smooth. But for me, it’s one-on-one, so it pisses me off when we lose a shootout because I didn’t make the difference in us winning. I hate getting scored on.”

It’s somewhat rare for a player — skater or goalie — to talk shootout strategy. You know, paranoia about giving away any secrets and all.

But two points are better than one, and the Knights over their first 11 games have twice left the ice winners because they proved better at one of the game’s more thrilling scenes.

Shoulder fake and a jab step.

Skills, man. They’re something else.