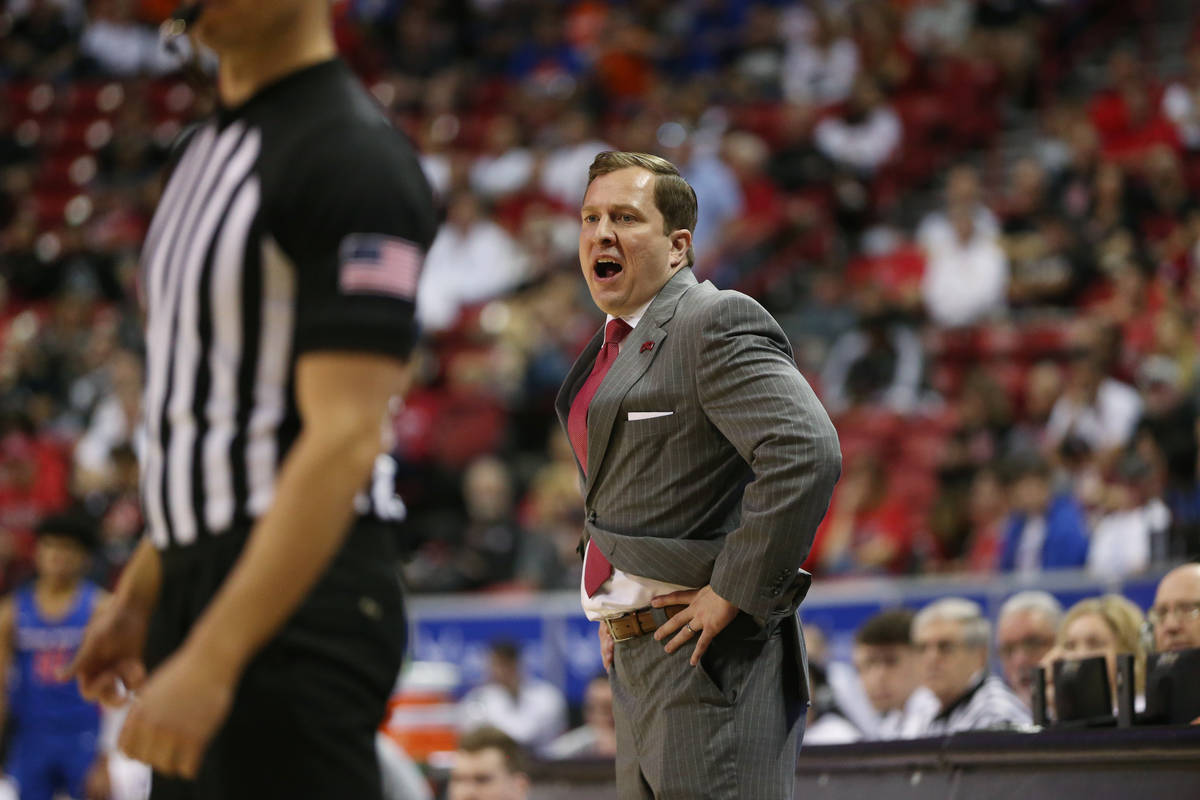 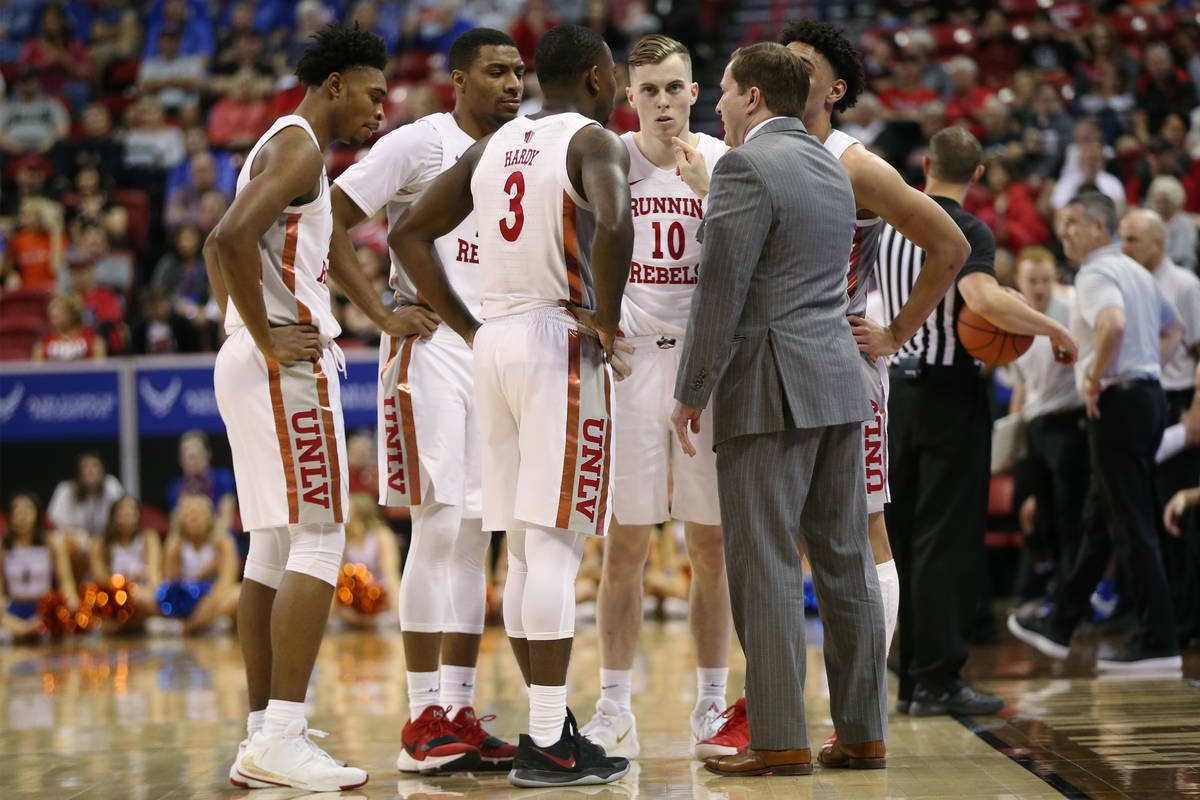 UNLV Rebels head coach T. J. Otzelberger talks to his team during a time out in the second half of the Mountain West tournament quarterfinal basketball game at the Thomas & Mack Center in Las Vegas, Thursday, March 5, 2020. (Erik Verduzco/Las Vegas Review-Journal) @Erik_Verduzco 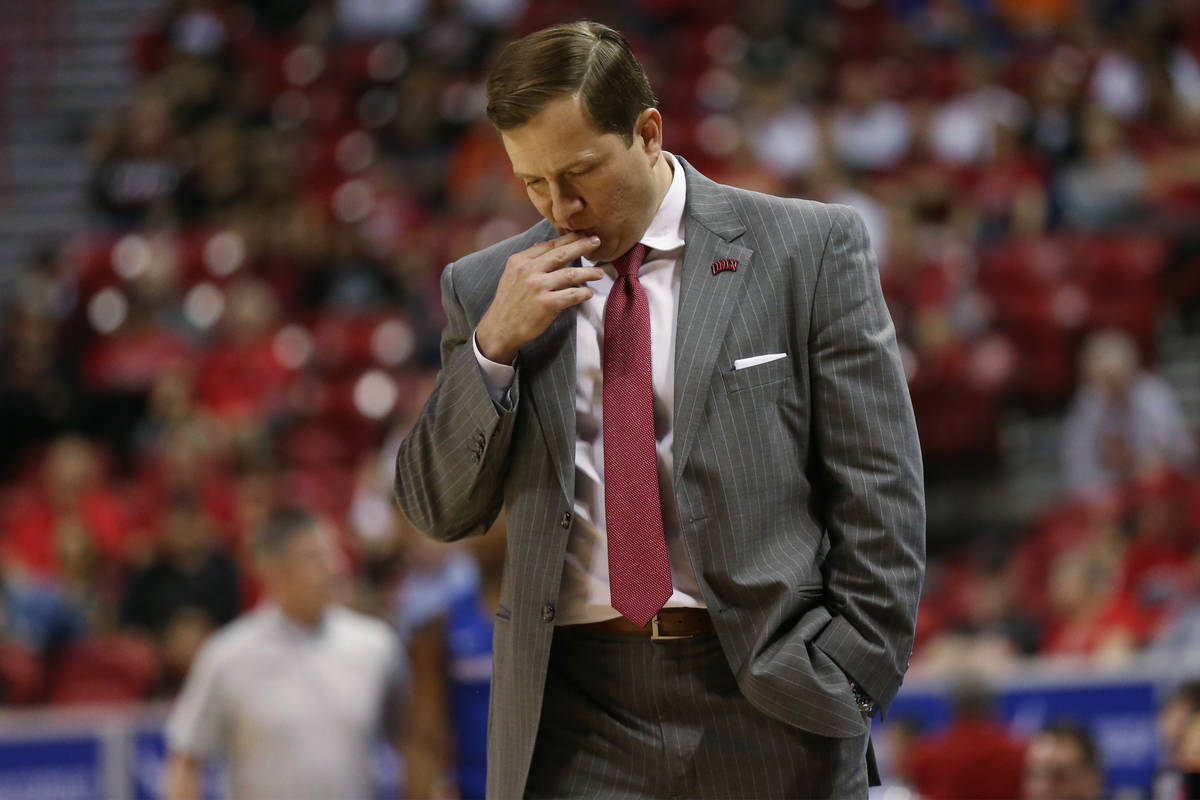 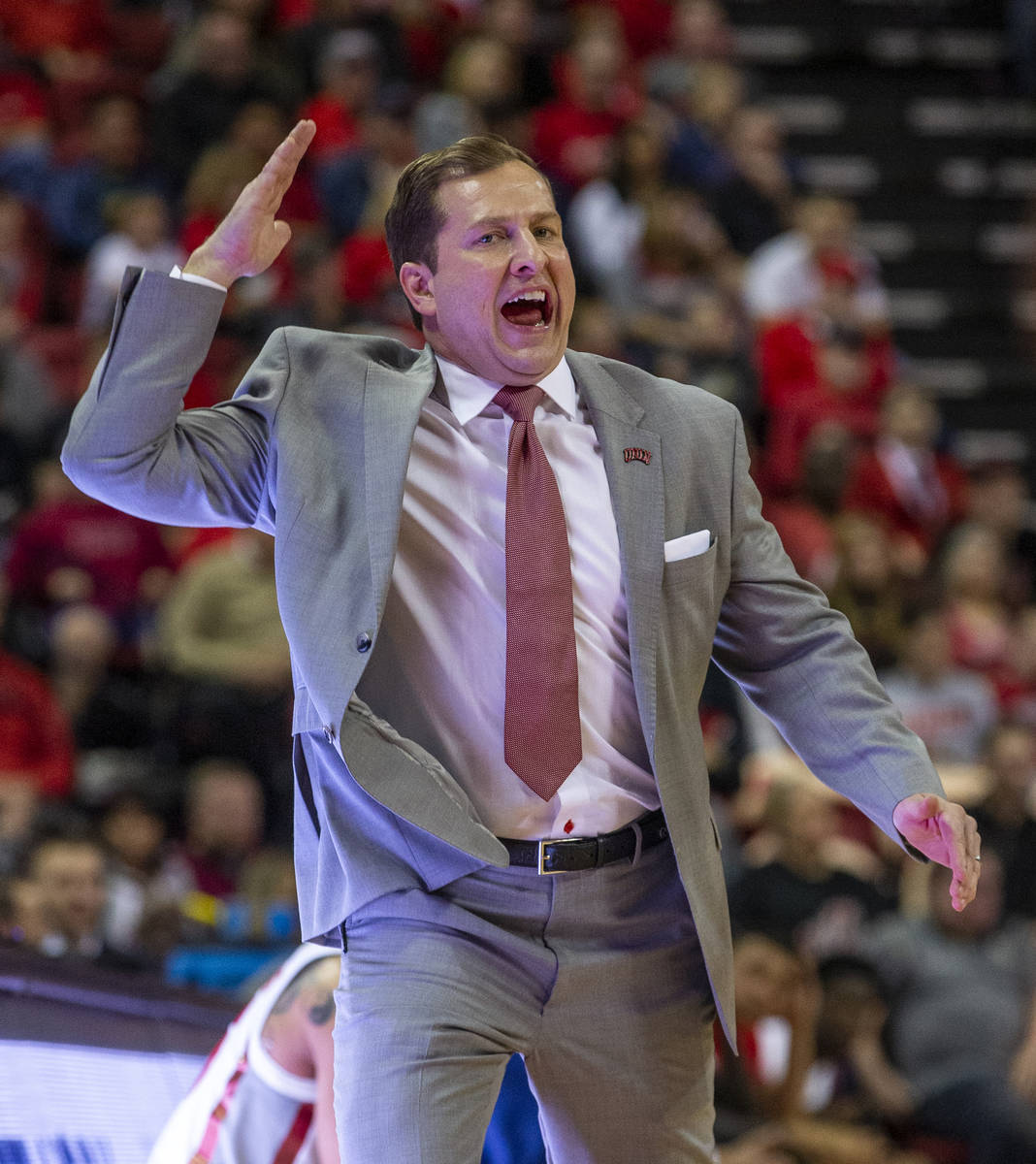 UNLV Rebels head coach T.J.Otzelberger yells in another play from the bench versus the San Diego State Aztecs during the second half of their NCAA basketball game at the Thomas & Mack Center on Sunday, Jan. 26, 2020, in Las Vegas. (L.E. Baskow/Las Vegas Review-Journal) @Left_Eye_Images 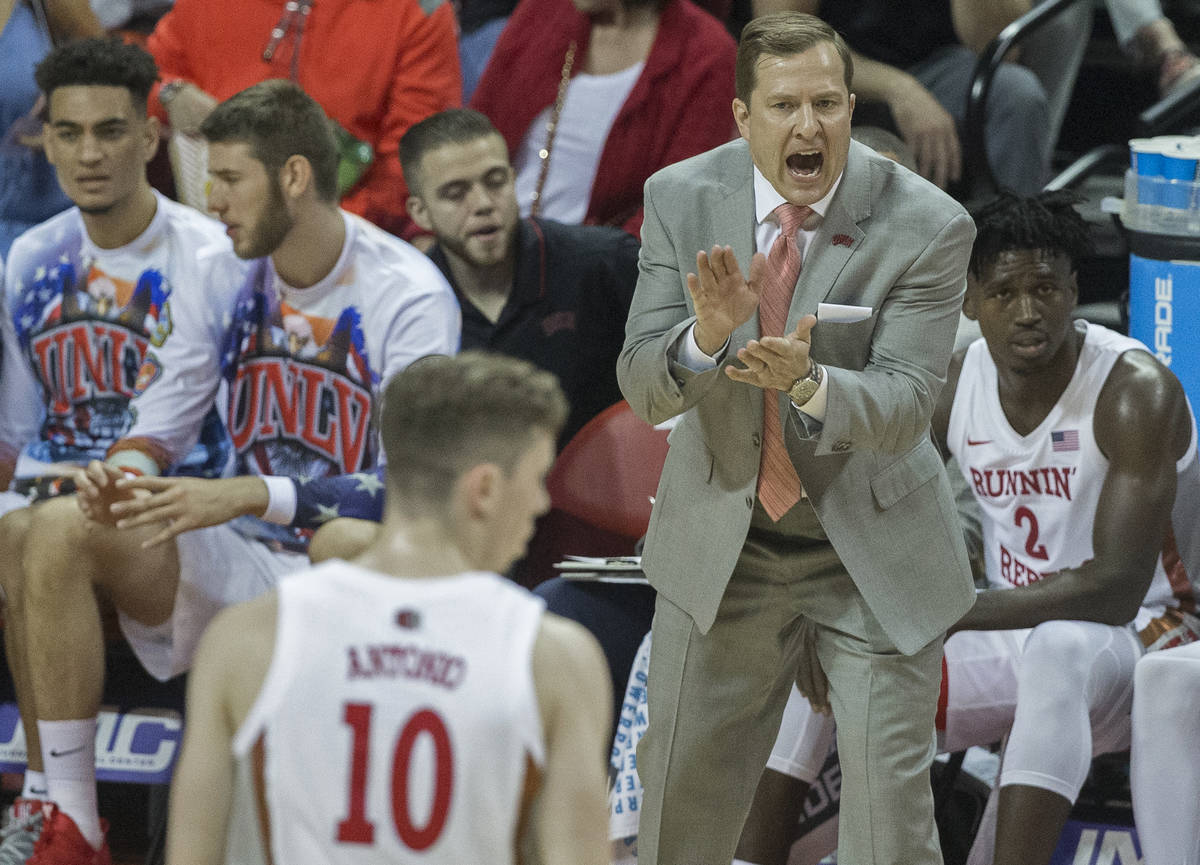 It’s not a question. T.J. Otzelberger was quick to point that out. He specifically mentioned the exclamation point. A mantra, he called it. A manner in which his UNLV basketball team would approach what is sure to be a bizarre and unconventional season.

“We don’t know what’s coming,” Otzelberger said. “There are probably going to be games canceled to COVID-19 one way or the other. There are going to be things moved around. We’re not going to be able to control any of that.

“What we can attack is what’s in front of us, and that’s what we’re focusing on. What’s next … Let’s get to it.”

His second season as UNLV’s coach begins Wednesday night, when the Rebels host Montana State in what will be a fanless Thomas & Mack Center. It’s an appetizer to ready UNLV for a main course of the Maui Classic, which begins Monday in Asheville, North Carolina.

The site from an island paradise to the largest city in western North Carolina, from views of a sparkling Pacific Ocean to those of the Swannanoa River, was changed in these pandemic times. UNLV’s first-round opponent — No. 16 North Carolina — wasn’t.

But this is a one-dribble-at-a-time season. Should basketball follow a similar pattern as its football counterpart, games across the country absolutely will be postponed or canceled. Some already have been. Thinking too far ahead for any sport is akin to accurately predicting a final score in the Super Bowl right now. Good luck with that.

And still, the unknown has not chilled the beliefs of many that Otzelberger’s second season will produce better results than the first, when UNLV finished 17-15 overall, including 12-6 in the Mountain West.

New faces are expected to make an immediate and positive impact. Among them is David Jenkins Jr., the guard who played for Otzelberger at South Dakota State and sat out a transfer season at UNLV last year. Among them is Nick Blake, recently named the league’s preseason Freshman of the Year.

Bryce Hamilton is back. He’s one the conference’s best players. Also returning are fellow starters Marvin Coleman and Mbacke Diong.

But while the basketball part will work itself out and on-court chemistry should develop in time, Otzelberger finds himself in an identical spot as coaches from all sports across the country when it comes to the coronavirus pandemic. Which is to say there is only so much he can do. Remind players to socially distance and wash their hands and embrace a life of sanitizing any and all objects. Keep reminding them.

“We made a commitment to each other not to go out in public to restaurants and gatherings and those types of things,” Otzelberger said. “I’m not naive. I know young people on our team are 18 to 22 years old, and sometimes with that age range, the best decisions are not always made. I do feel good about our guys trying to educate themselves and learning about things that could put them at risk and doing everything we can to mitigate that.”

He’s a teacher first. Shouldn’t all coaches be? As much as Otzelberger is lauded by peers for his offensive schemes and embracing all things modern about the game, how he handles the impending season with his players outweighs any analytical praise from outsiders.

This just in: Kenpom is a wonderful tool by which to gauge the best and most efficient of college programs. But it doesn’t have a formula for dealing with COVID-19.

There is no set ratio for guiding a team through such choppy and unrelenting waters. No strength of schedule rating that tells you if this thing will only get tougher to combat. No sort of tempo to any of it.

“Hopefully this has taught all of us a little more humility and thankfulness and gratitude for what we do have, not taking it for granted because we know how quickly it can be taken from us,” Otzelberger said. “Be mindful what others are going through. Stay in the moment.”

For starters, a season unlike any college coach or player has experienced.