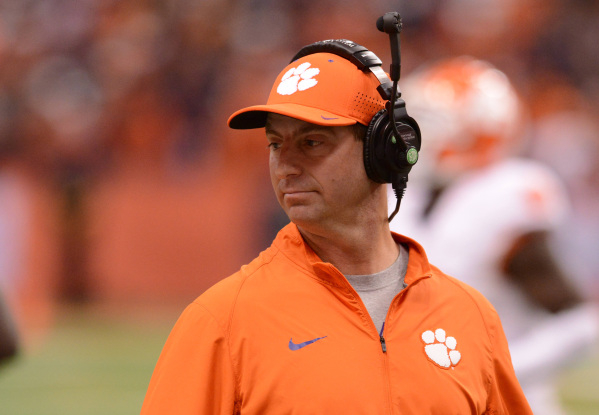 It is conceivable, perhaps more than not, that the fourth and final spot in the College Football Playoff this season will point directly to a team that is 4-6 today, has been outscored 299-249 and has little to no chance of qualifying for a bowl.

Yep. Texas might be the key to deciding things.

The top four teams in the selection committee’s rankings didn’t change this week, with Clemson, Alabama, Ohio State and Notre Dame being tabbed Tuesday as those who would advance to the semifinals should they commence today.

But as the weeks pass and things become clearer and the Big 12 Conference actually begins staging games of significance, a certain scenario seems more and more plausible.

Should Notre Dame and Oklahoma win out, each finishing with just one loss and neither part of a conference championship game, how they fared against a common opponent could ultimately decide which one is part of the playoff.

Five weeks later, reeling at 1-4 and having lost the previous week to Texas Christian by 43, the Longhorns beat Oklahoma 24-17.

If all things are even when the committee votes a final time, it would appear Notre Dame’s victory against the Longhorns might be enough to knock out the Sooners.

It would be the correct decision based on criteria used but also a shame, given No. 7 Oklahoma is playing as well as anyone today.

Should it finish the regular season 11-1, the Sooners would have beaten Baylor, TCU and No. 6 Oklahoma State in consecutive weeks.

“The (top four) are still pretty solid, but with Big 12 teams — we didn’t know which ones — as anticipated with a schedule backloaded, we now see a few emerging,” committee chairman Jeff Long said.

That would be unbeaten Oklahoma State and Oklahoma, which meet in Stillwater on Nov. 28.

Which means everything is still in front of both, but it might not matter should the Sooners have their resume compared to a one-loss Notre Dame team a few weeks from now.

Other notes from Tuesday’s rankings:

* Some on the 12-member selection committee lobbied for one-loss Alabama at No. 2 to jump undefeated and No. 1 Clemson, but the idea was shot down when votes were tallied.

* Stanford is the highest-ranked Pac-12 team at No. 11 after its loss to Oregon, all but confirming the conference will not be part of this year’s playoff.

* Iowa remained No. 5, meaning if the Hawkeyes win out and finish 13-0 — which would include No. 3 Ohio State losing at some point — they would make the final four.

* North Carolina is 9-1 and appears headed toward an Atlantic Coast Conference championship game with Clemson, but the Tar Heels are ranked 17th because of a spotty resume that includes an awful loss to South Carolina and wins against Football Championship Subdivision teams in North Carolina A&T and Delaware.