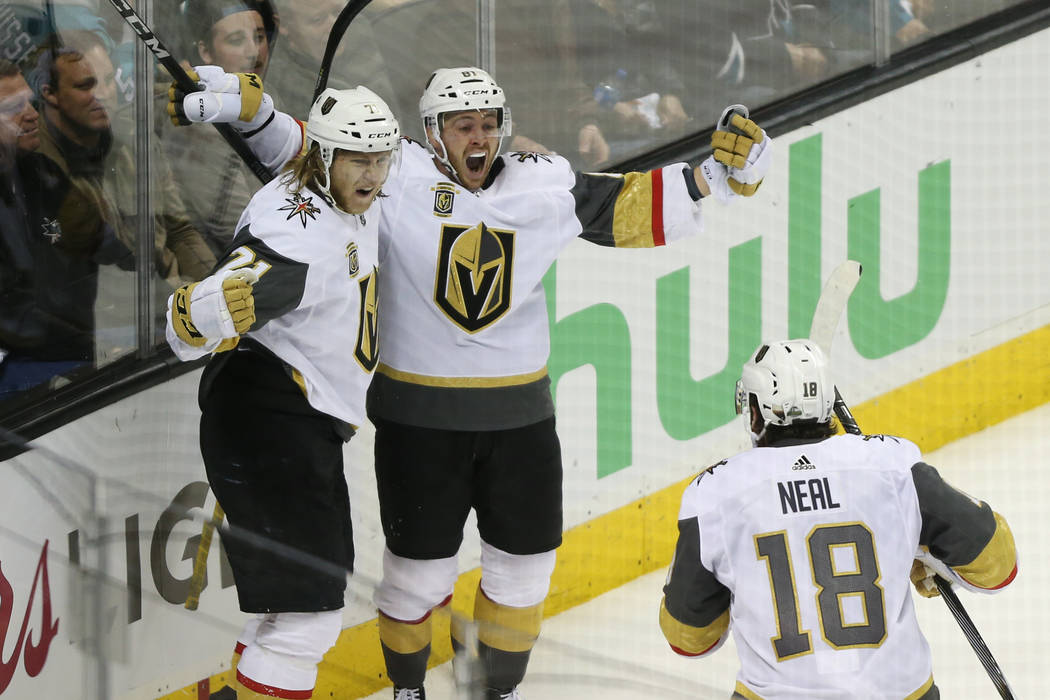 Let’s get this out of the way: These aren’t the same dudes who sang about exterminating the human race and abandoning creation and testing thresholds of pain and overdosing — embrace life’s Hallmark moments while you can, folks — but rather ones who never forget where they came from to form this current bond.

These aren’t the Misfits of punk rock and skull logos atop coffin-shaped skateboard decks in the mid-1980s, though such memories tend to get a guy a little misty-eyed.

Hard to beat those graphics back in the day.

But in winning yet another Stanley Cup playoff game Monday night, a 4-3 overtime thriller against San Jose to take a 2-1 lead in the best-of-seven series, the Golden Knights again reminded those asking questions afterward of a certain incentive that has defined their expansion journey.

Golden Misfits that are now just 10 wins away from the #StanleyCup. 👀 https://t.co/2ZLFc2ElHY pic.twitter.com/GooixiVvQC

“We’re the Golden Misfits,” Knights forward William Karlsson said. “It’s more of a joke, really, but we are the guys who teams didn’t protect. More a joke, but because we’re all in the same situation, it’s a fitting name.”

The joke part is simple: When you win the Pacific Division in your first year of existence and then sweep the Kings in four games to open the playoffs and then remain among the betting favorites to capture the Stanley Cup as the San Jose series begins, nobody is doubting your propensity to deliver greatness.

If anyone is still sleeping on the expansion Knights, then they might have accidentally ingested 10 too many Unisom and that punk rock band could have some fresh lyrics coming.

But teams have forever latched onto and used certain themes or catchphrases to create a sense of camaraderie and an us-against-the-world mentality — you remember the Boston Red Sox ‘Idiots’ of 2004, yes? — and in supporting the truth that they are indeed a room of castaways, the Knights have rallied behind such a theme.

Which means while it’s a contrived sense of motivation — the Knights absolutely know how good they are — it’s still used to inspire effort when facing adversity.

“Obviously, it was a good way to break the ice in the beginning of the season,” forward Pierre-Edouard Bellemare said. “Now, at the end, it’s just more about being a group of guys who were left unprotected. That’s what we have in common. I think it has been something that has been good for us.”

Can such a moniker inspire them to win it all?

They will be presented such opportunity Wednesday night at the SAP Center, where San Jose undoubtedly will come out with even more focus and aggression than even Monday, when it controlled a scoreless first period and then rallied from two goals down in the third to force overtime.

The whole Golden Misfits idea isn’t, thankfully, paraded in front of the world as some vehicle the Knights use to suggest theirs isn’t a respected bunch.

They know better, or at least should.

We see it all the time in sports — great players or teams explaining success by immediately using a perceived lack of regard from others as a central source of motivation. Usually, it emerges from those who have either been ranked or favored or constantly praised over a given season.

Usually, the whole woe-is-us storyline is a bunch of nonsense.

You can ride such a theme, though, far into a postseason, quick to remind anyone listening that you are the product of teams across the NHL that viewed you expendable.

There is some benefit to all this.

But more than anything else, the Knights have found humor in it, and recently two girlfriends of players were seen across social media wearing Golden Misfits T-shirts, complete with a similarly spooky skull logo of the punk rock band.

Only this one had a gold helmet.

“Sometimes, we laugh at it between us, being the misfits,” goalie Marc-Andre Fleury said. “It doesn’t bother us too much.

He smiled, as they all do when asked about it, but that’s not to say it doesn’t at some level keep the intensity burning.

Ironically, the Misfits had a song about the earth catching fire and lands being covered in darkness and all sorts of premonitions of sorrow and anger.

Which isn’t the same as keeping Brent Burns and Joe Pavelski off the power player, but to each Misfit — Golden or otherwise — his own.