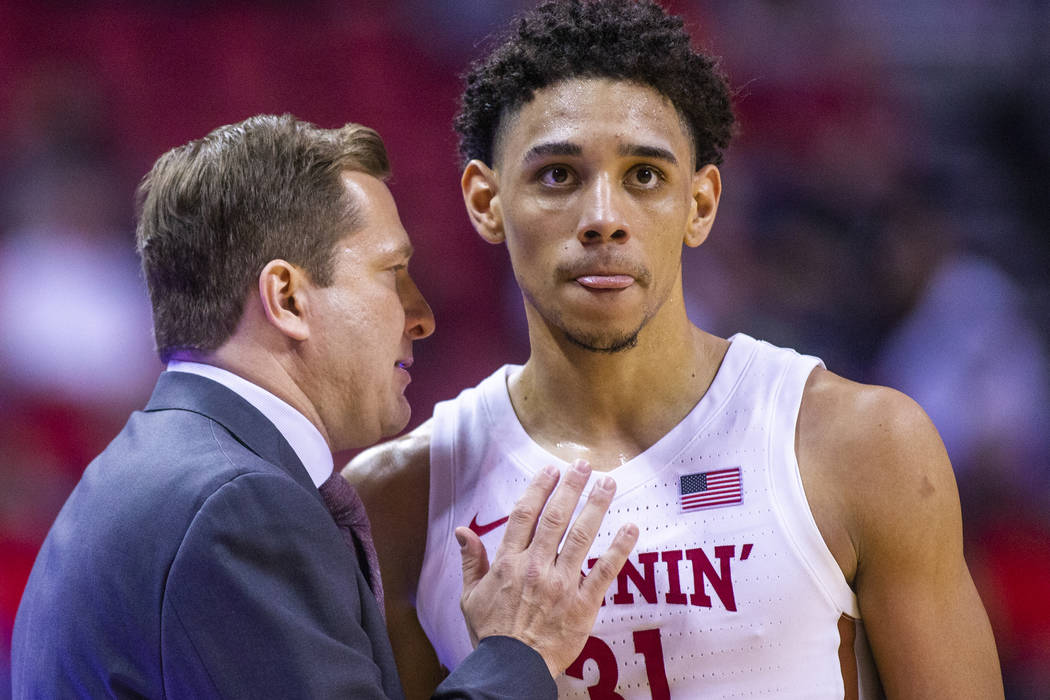 I hate stars. Always have.

Not the kind astronomers study or kindergarten teachers attach to a child’s work or those on Hollywood Boulevard.

The other kind. The ones that never see Marvin Coleman coming.

Mixed within the Golden Knights moving forward with a new head coach and Raiders owner Mark Davis being photographed with you-know-who from the Patriots, Las Vegas sports has another storyline brewing.

UNLV basketball will tip off at UNR on Wednesday night alone in second place among Mountain West teams, a few long Jonah Antonio 3-pointers away from the seventh spot predicted for the Rebels in October.

Nobody saw this coming.

I mean, do you remember after the Pacific loss, when the leading plot wasn’t about how bad the Rebels looked, but rather how a few players struggled to tell time?

The sophomore Coleman is one of many reasons UNLV has since outperformed expectations. He’s a former walk-on point guard out of Foothill High whose name hardly pulsated through recruiting rankings.

Not even a blip on the hype screen.

“I remember telling colleges that came to see him that what stood out to me was that he was a great rebounder,” said Kevin Soares, who coached Coleman for four years at Foothill and now runs the program at Bonanza. “And then those schools would blow me off. Kids basically get labeled by (recruiting stars) and it becomes all about that.

“The bottom line is, Marvin is a leader who does anything needed to win. He’s not like most kids who are only concerned with numbers.”

I understand the fascination with recruiting stars, especially across the Twitter universe. It’s a big-money business in some circles, a way for assistant coaches to make a name for themselves by selling their bosses on certain players, a topic for newspaper headlines and sports talk radio.

But the kid who was just named conference Player of the Week and on Saturday produced UNLV’s first triple-double since 1999 was, by all accounts, a 2-star recruit.

Rivals didn’t even bother rating Coleman, as in zero stars.

He had two offers out of high school and next to each (Fresno State and LaSalle) on one recruiting site was the word “cold.”

I’m pretty sure that had nothing to do with the temperature on either campus come basketball season.

Sure. Coleman might be an exception to the rule. He probably is. So was a certain former prep quarterback who was a 2-star recruit with offers from Eastern Illinois, Illinois State and Montana State.

It’s a rare occurrence, obviously, but illustrates the possibility.

“I put zero credence into (recruiting stars),” said UNLV basketball coach T. J. Otzelberger. “I’m good friends with many who rank and evaluate players. But it’s mostly based on height and athleticism and physical attributes. It doesn’t take into account the mental aspects that are so important. I want guys who fit our program, and that has nothing to do with how many stars they have.

“Marvin Coleman has the qualities we try and identify. He understands it’s not about him. He’s a player you can tell the truth to and he accepts it. He has a network around him that supports the coaches. Those traits are all important and harder to come by in 2020.”

UNLV football apparently just had a strong recruiting weekend. Last year the Rebels signed the highest-rated defensive player in school history, a junior college product, and the kid couldn’t even start as a junior on yet another terrible UNLV side.

None of this stuff is predictive of how many wins a specific class will ultimately help deliver.

I’m in the minority here. I get that. Most folks, media and fans alike, love debating the Star System. They can’t get enough.

I couldn’t care less about it.

Is the kid coachable?

Is his coach good enough to make him better?

What is the player’s mental makeup?

What level of effort will he exert to improve?

Can he tell time?

There is so much more to this than measurables. So many characteristics impossible to foresee.

Marvin Coleman’s emergence wasn’t written in the stars, not in some recruiting constellation influencing his progression as a player.

Hard work did that.

Leave the stars to 5-year-olds with strong coloring skills.