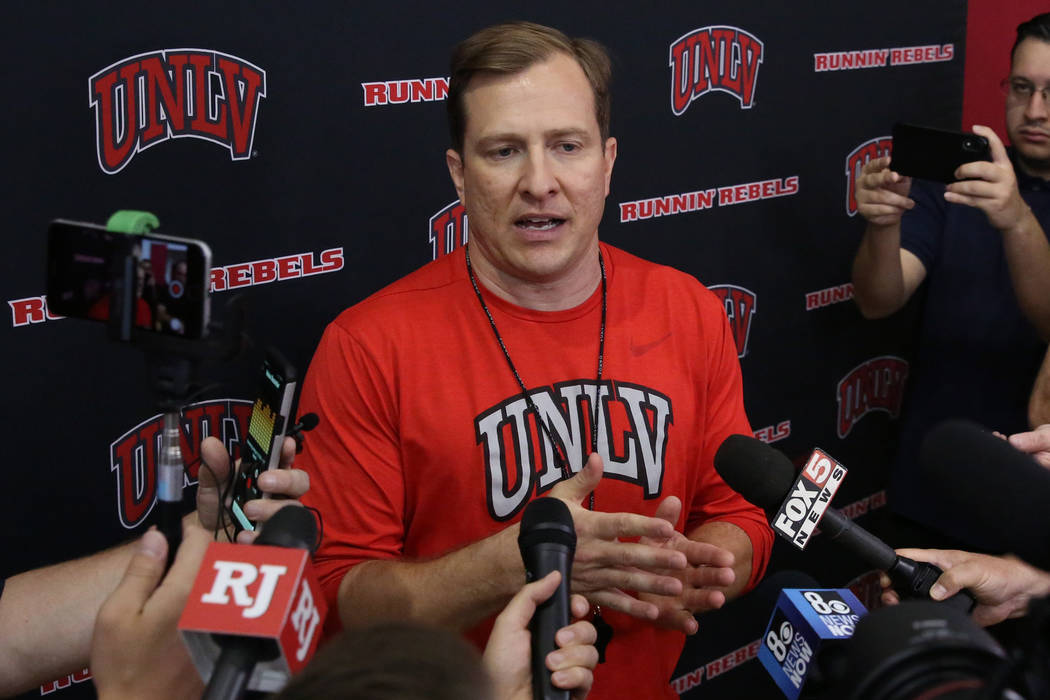 A poll of 17 votes means nothing in October, just another tool by which to generate national interest in a Mountain West basketball conference that has lost its way.

It means even less for UNLV, which long ago strayed off course like a confused scout searching for trail markers in a darkened wilderness.

We can debate from now until Selection Sunday what in the world win-now means when it comes to the Rebels. But if there exists a significant goal by which they should strive under first-year coach T. J. Otzelberger, it’s this:

Be better in December than November.

Better in February than January.

At your best in early March.

It’s an objective that UNLV hasn’t always met of late. It’s a program that last made the NCAA Tournament in 2013 and whose fan base turns more and more apathetic with each empty red seat at Thomas & Mack Center.

UNLV on Tuesday was picked seventh in a preseason poll of the 11-team Mountain West, certainly a placement earned by a program that is 84-78. 39-51 in conference, since the 2014-15 season.

Otzelberger’s resume is clean when it comes to such results. But it’s his program now, meaning he becomes the latest UNLV coach to swim in a sea of other people’s grand and often unrealistic expectations.

As for those who cover the conference, their viewpoints about UNLV are more tempered.

“I’m not sure young people today are as motivated by what others pick in a preseason poll,” Otzelberger said. “I think for our group, the mindset we have tried to cultivate is that it’s not about where we start, but how we get better and where we are in the end. (Polls) are pretty inconsequential on what you’re doing day to day.”

But, hey, teams can jump ahead fast.

Utah State, a unanimous selection to claim this year’s title, offered a blueprint last season for a side picked far down the pack (ninth) to win the conference,.

Unless, of course, Otzelberger has been hiding the league’s best guard and big man in a closet at the Mendenhall Center.

Sam Merrill and Neemias Queta return for the Aggies, meaning the odds that anyone picked outside the top three or four teams might contend for a league banner probably rank alongside those of Otzelberger’s system suddenly embracing the midrange jumper.

But there are similarities between the champs of last year and the Rebels of this one.

Be who you are

Craig Smith replaced a fired coach at Utah State in 2018, charged with rebuilding a program that, when successful in its not-so-distant WAC past, annually contended for conference titles and NCAA berths.

The Aggies also play out of a home arena (Smith Spectrum) that, when filled to capacity in the altitude of Logan, ranks as one of the toughest venues nationally for a road team to win.

They are all qualities that have at one point defined UNLV (except for the part about 4,500 feet of elevation), factors Otzelberger can use to his advantage over time by delivering a singular theme: Win.

“T.J. is a really good coach and a great recruiter,” said Smith, who coached against Otzelberger when both were in the Summit League. “He has a great sense of who he is and what he’s going to need in terms of players for his style of play.

“If I would tell him anything about (the Mountain West), it’s just be who you are. You have to adapt and adjust where applicable, but T.J. knows what is at stake. He’s a smart guy. You want expectations. You want to be somewhere where basketball is viewed as very important.”

The last guy in Otzelberger’s seat lasted three years, saw the team’s conference finish improve from 11th to seventh to fourth and was fired.

For starters, Otzelberger should worry only about being better later than now.

Polls mean nothing. But for UNLV, being at your best in early March would make Otzelberger’s first season a success.