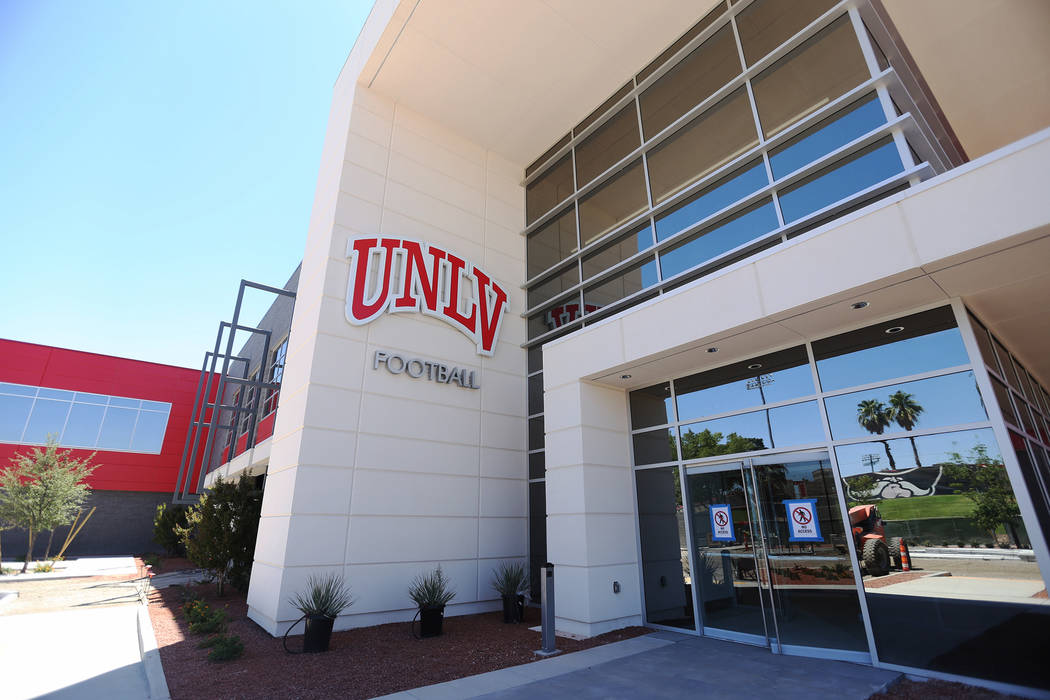 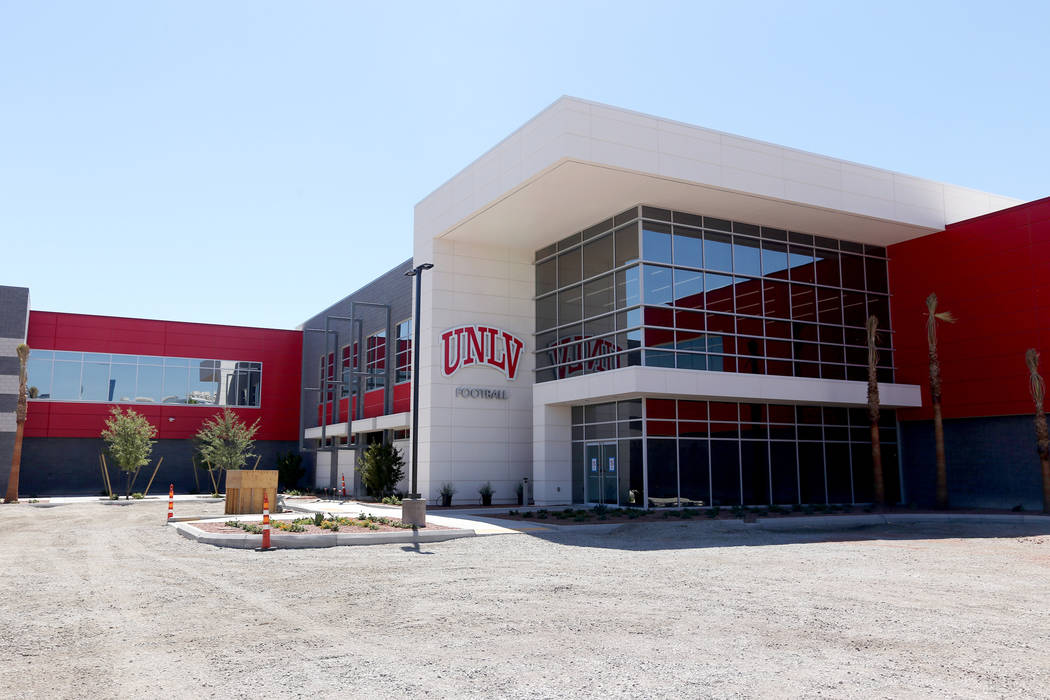 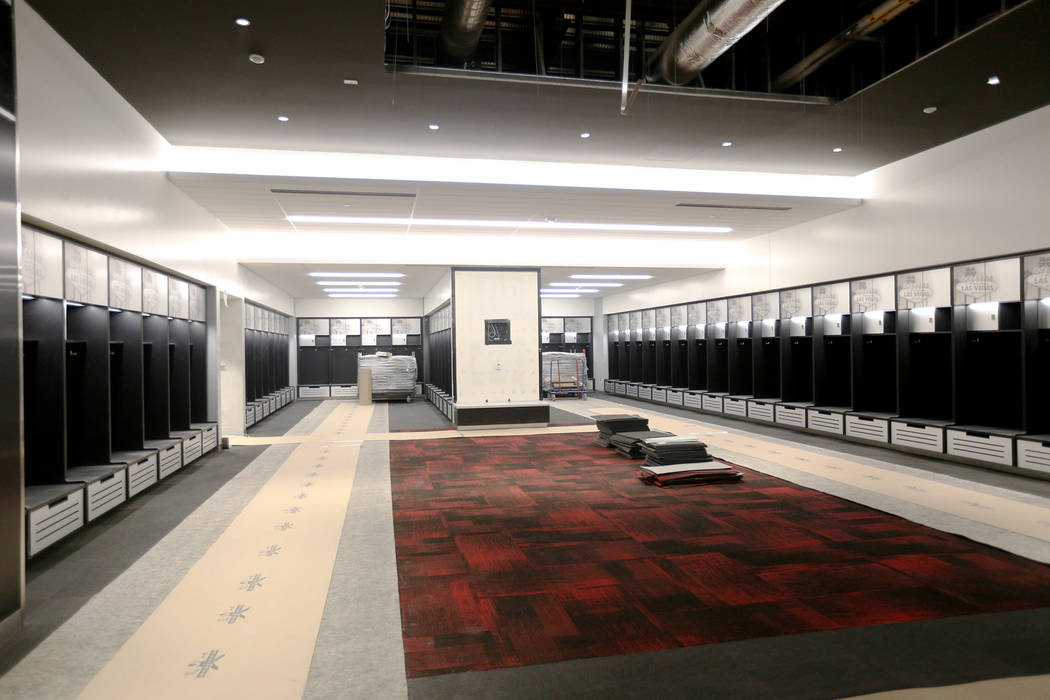 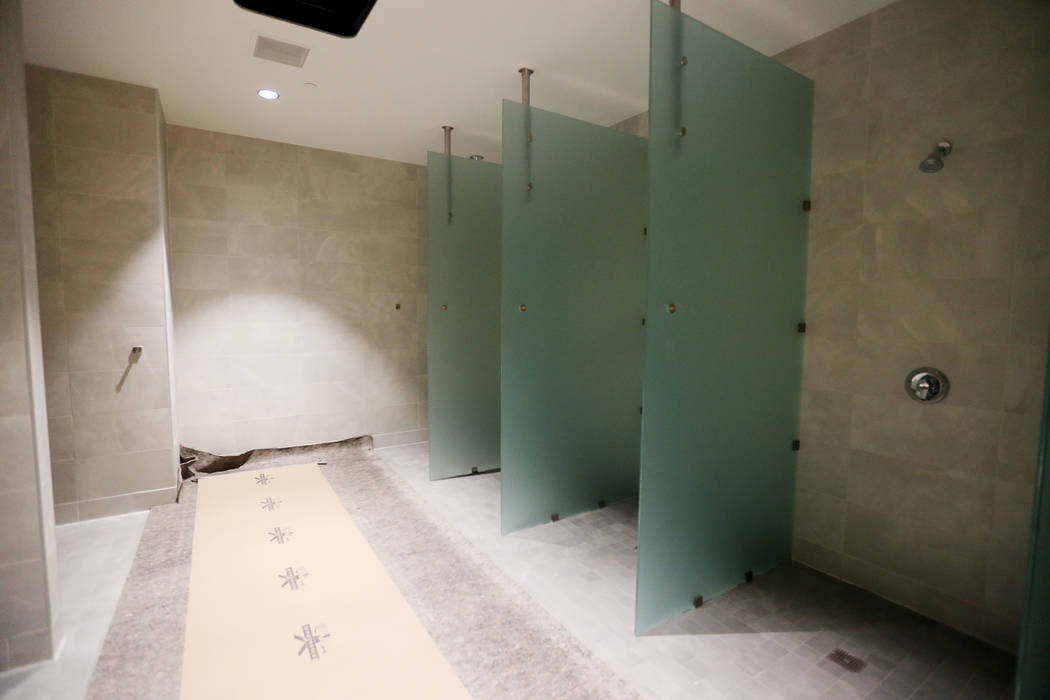 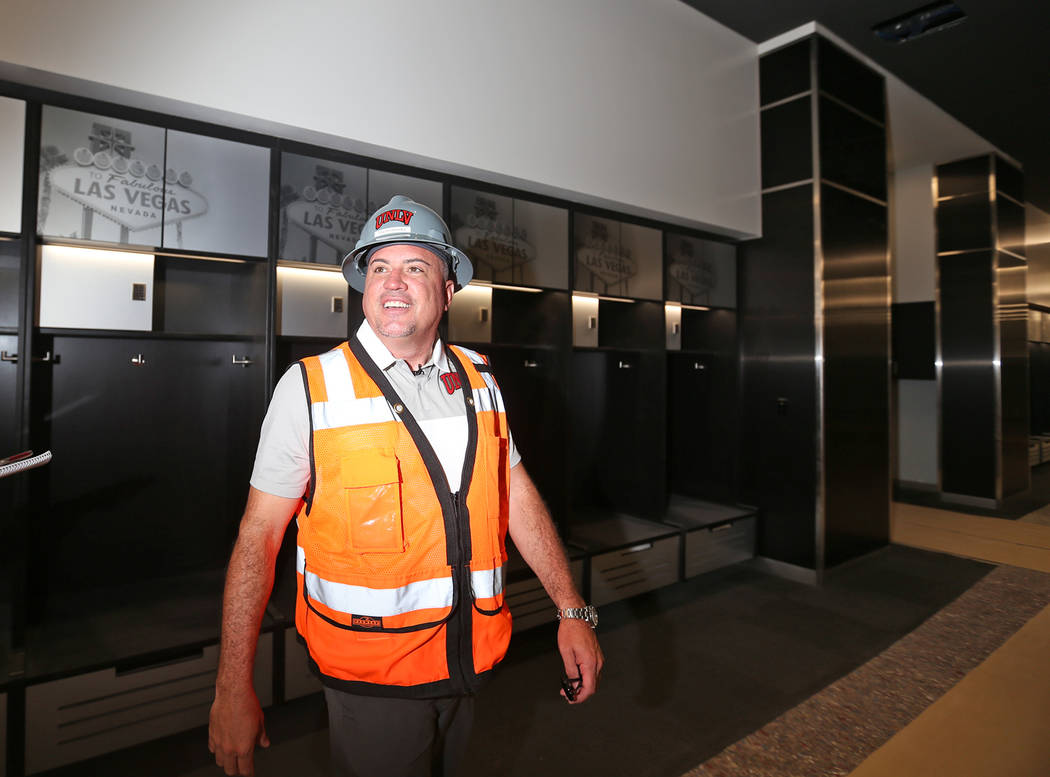 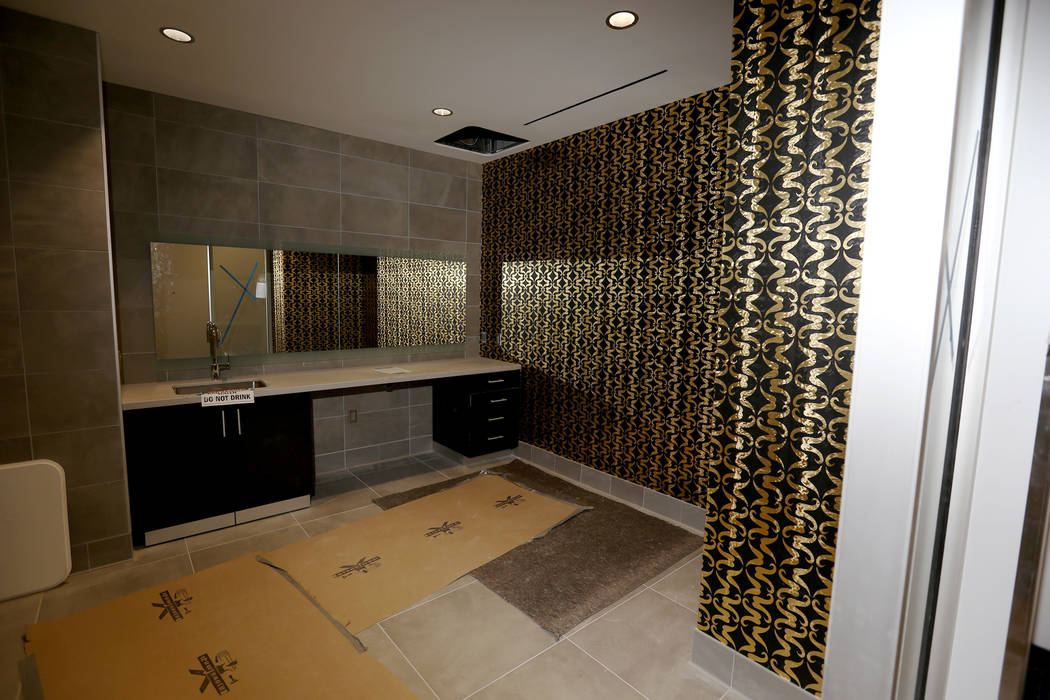 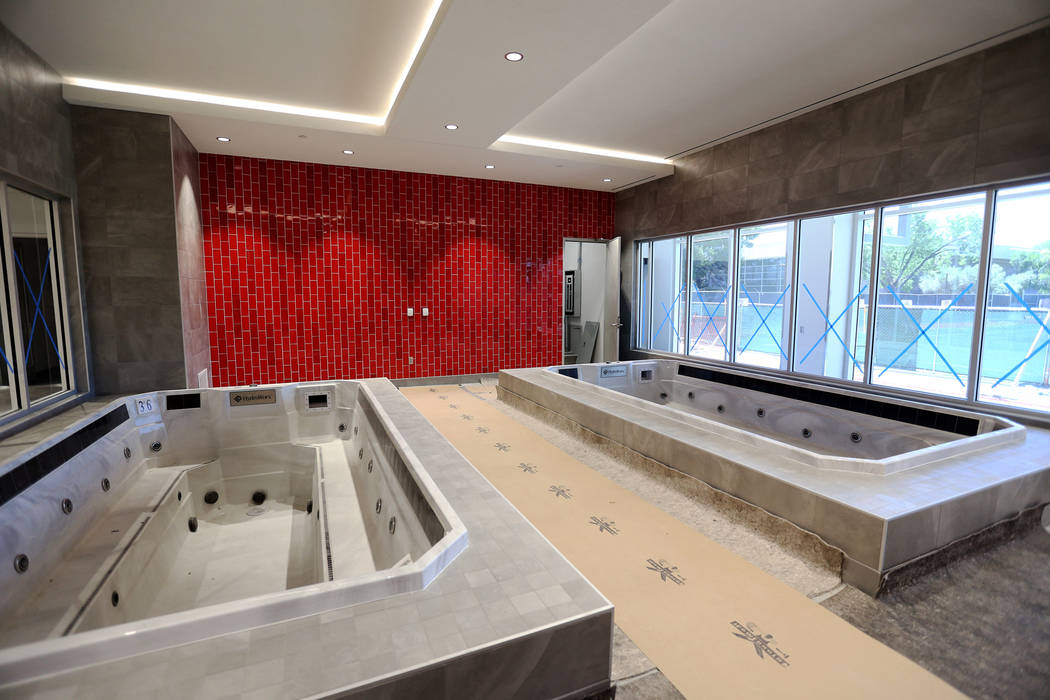 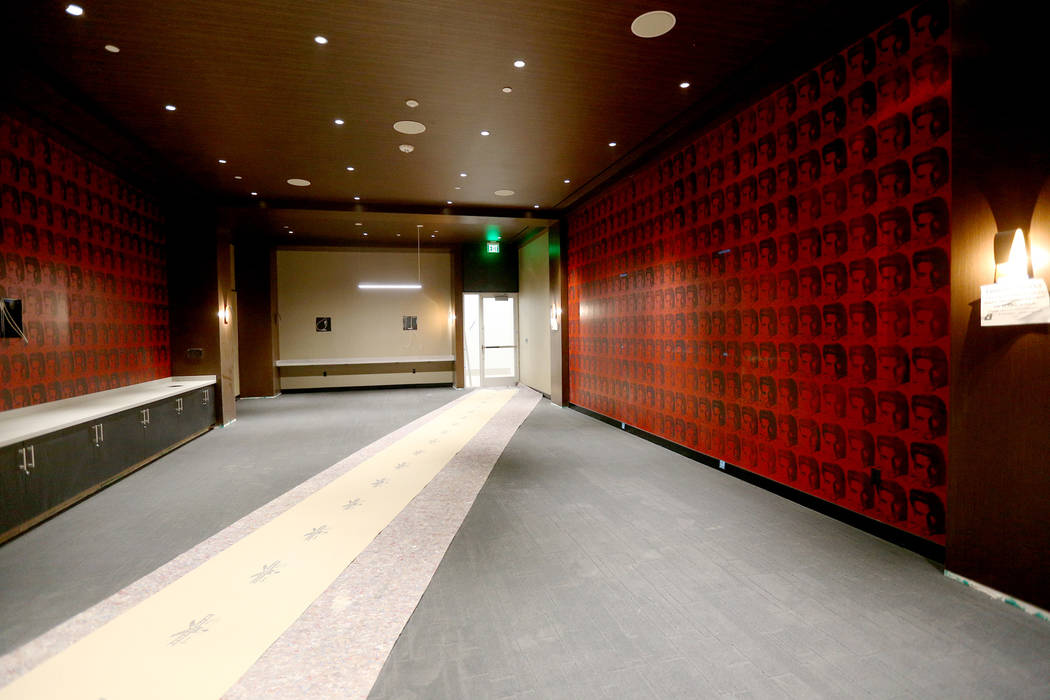 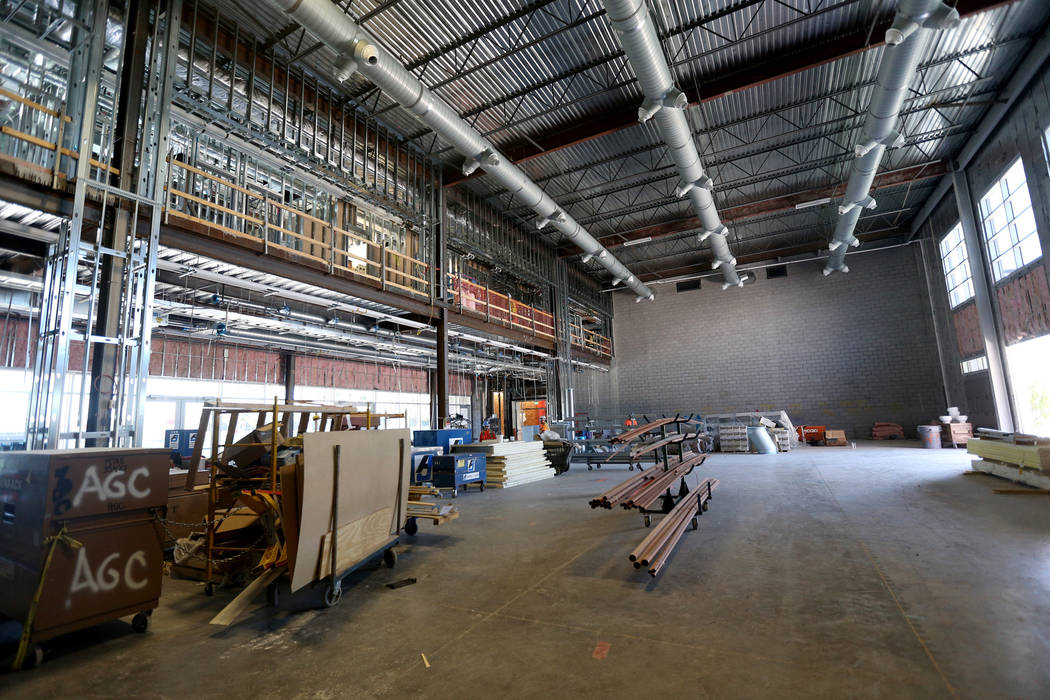 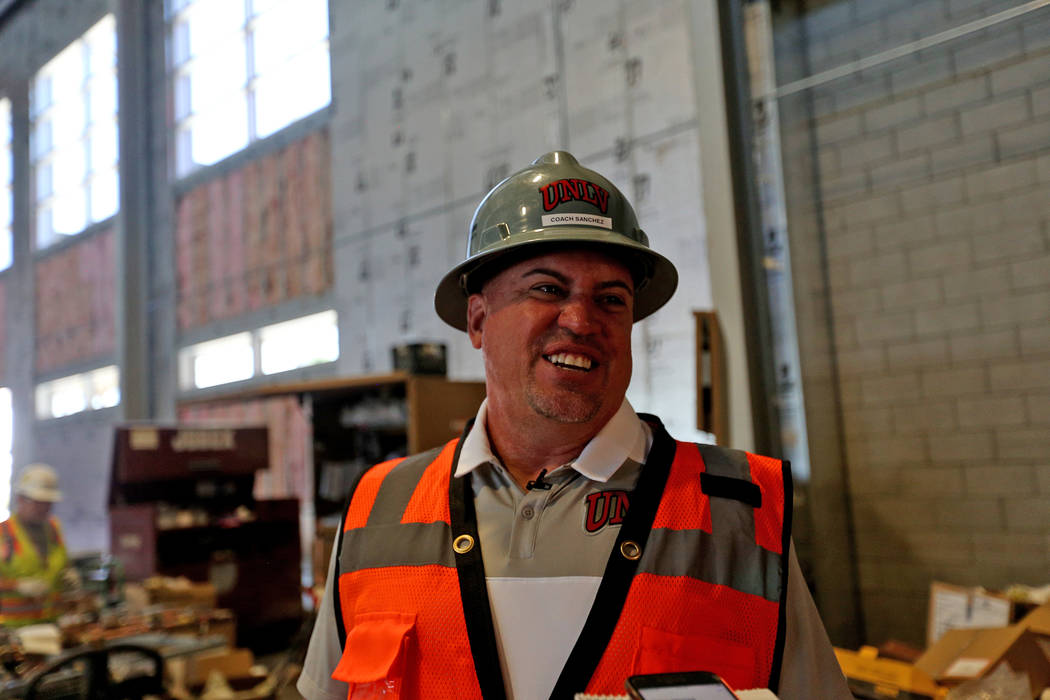 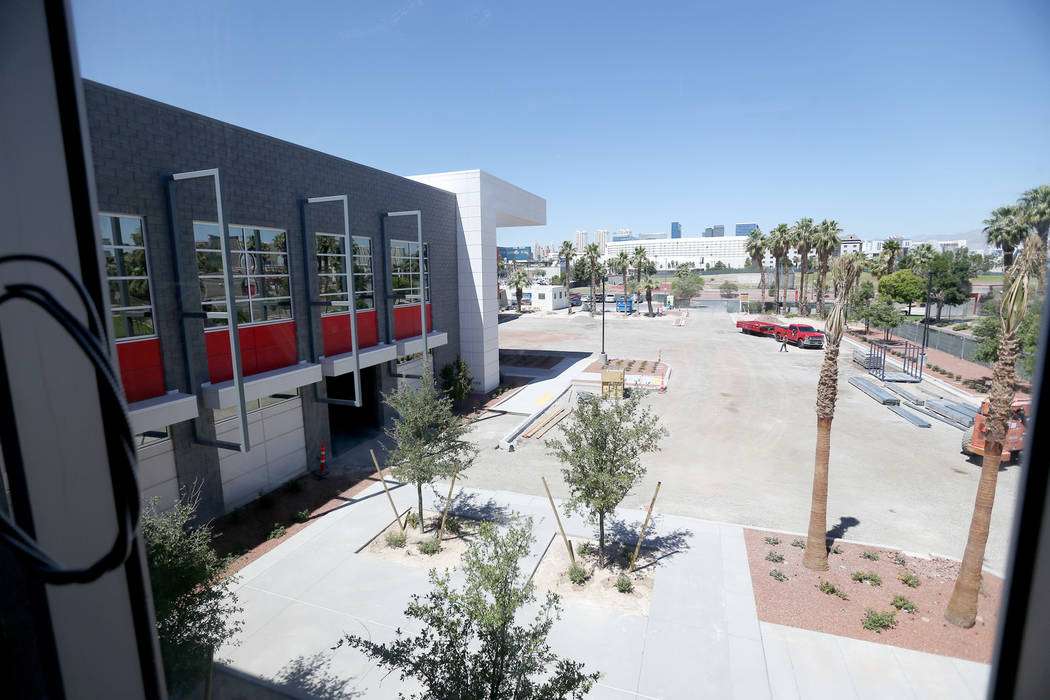 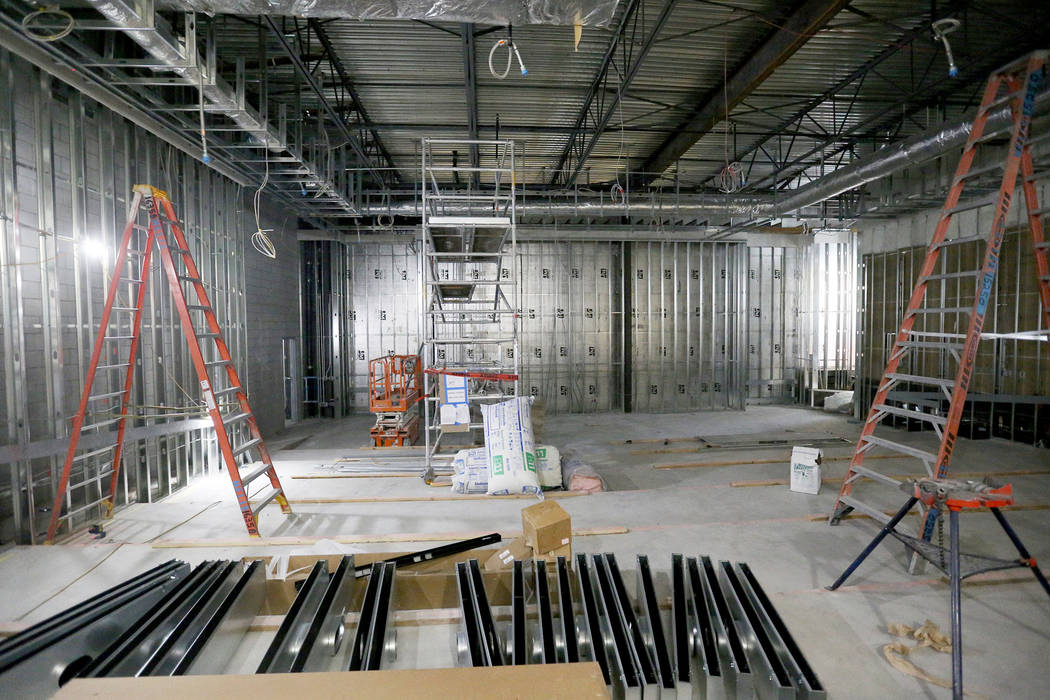 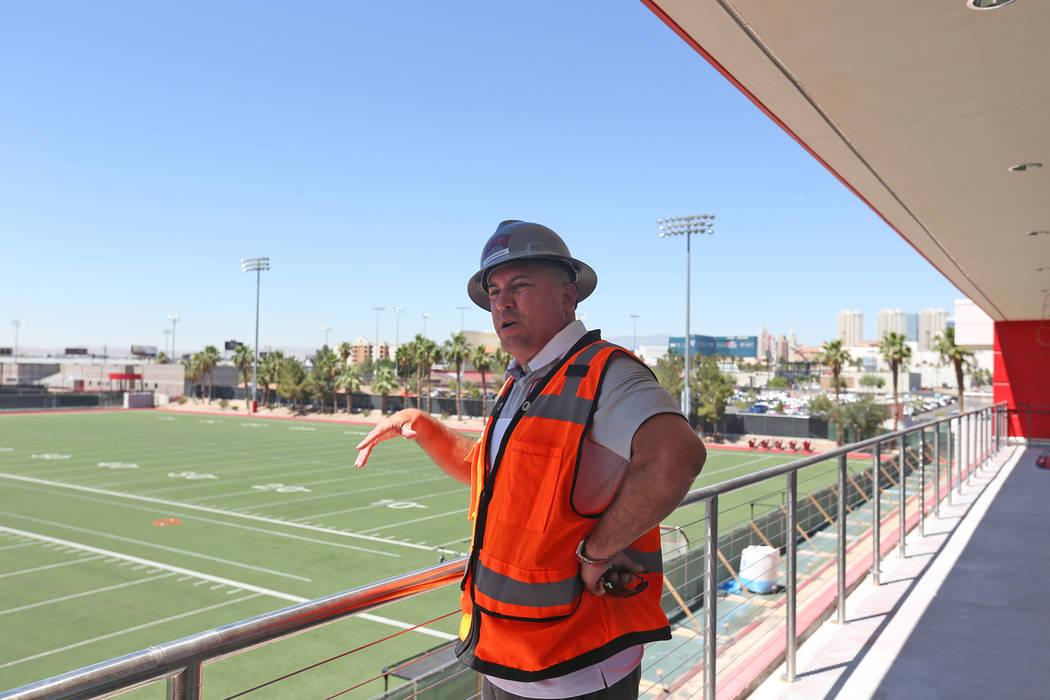 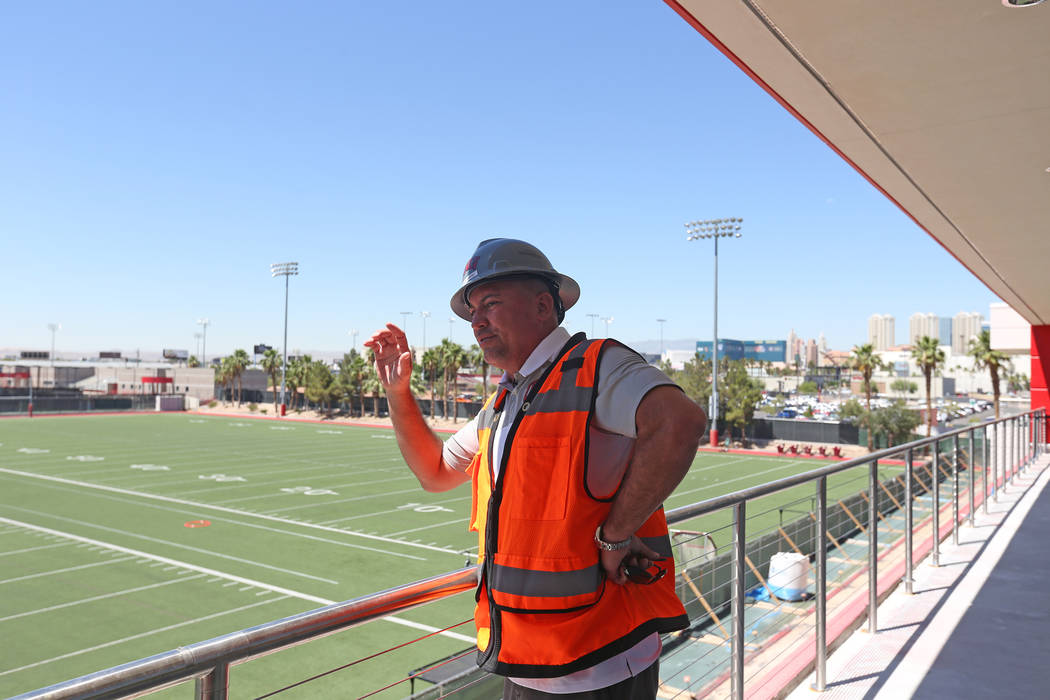 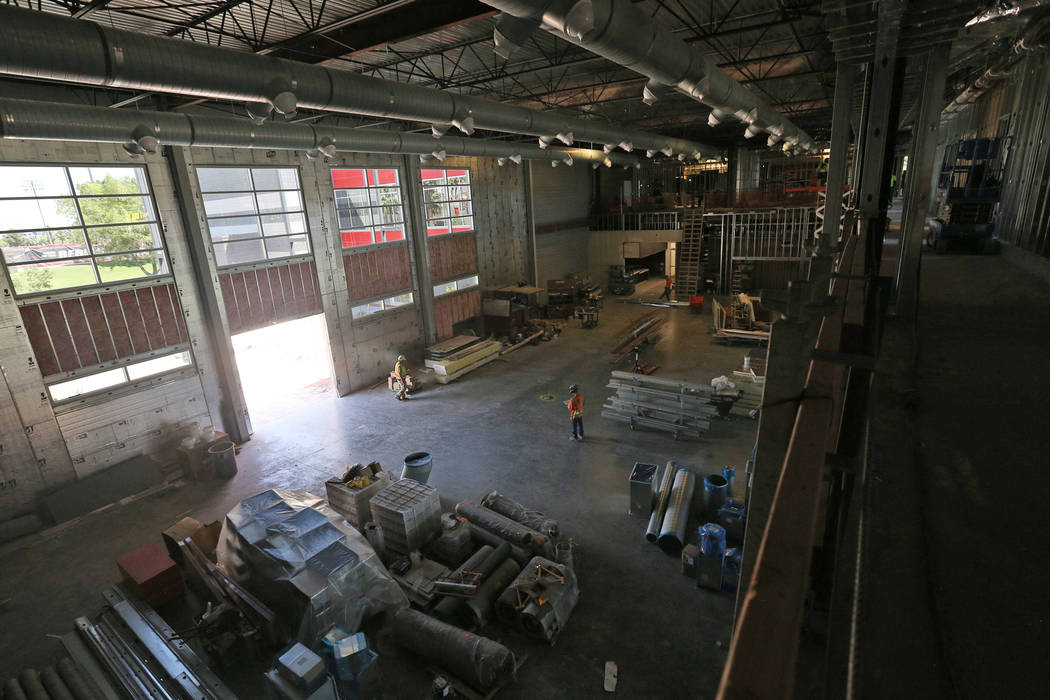 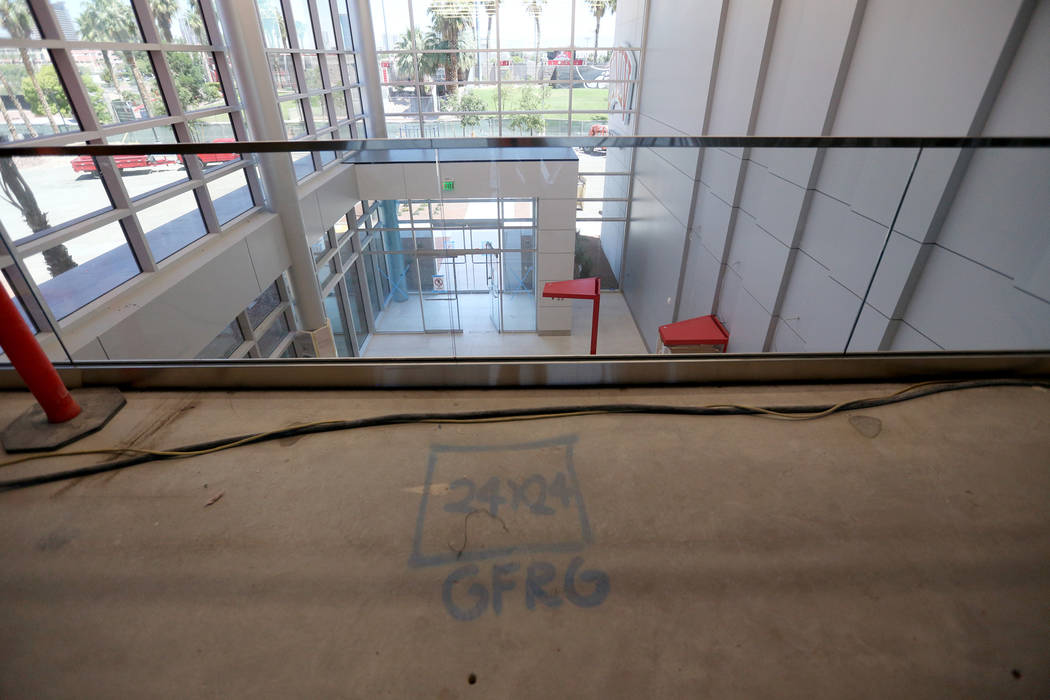 The spot above the main entrance where the Fremont Canon will sit at the new UNLV Fertitta Football Complex, still under construction, in Las Vegas, Monday, June 24, 2019. (Rachel Aston/Las Vegas Review-Journal) @rookie__rae 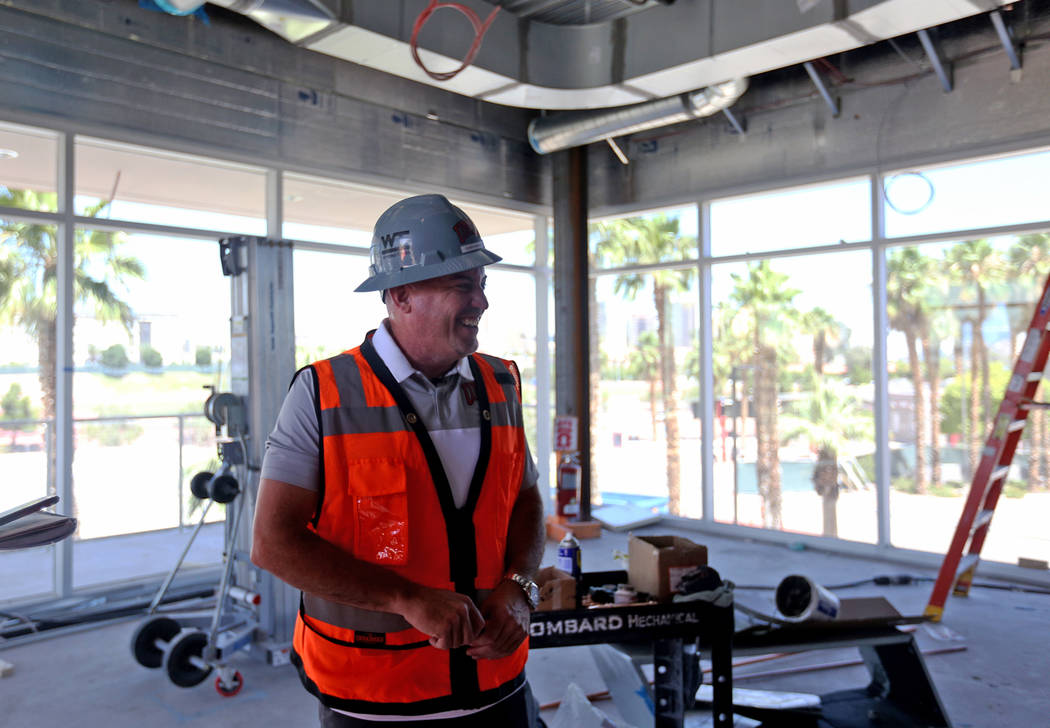 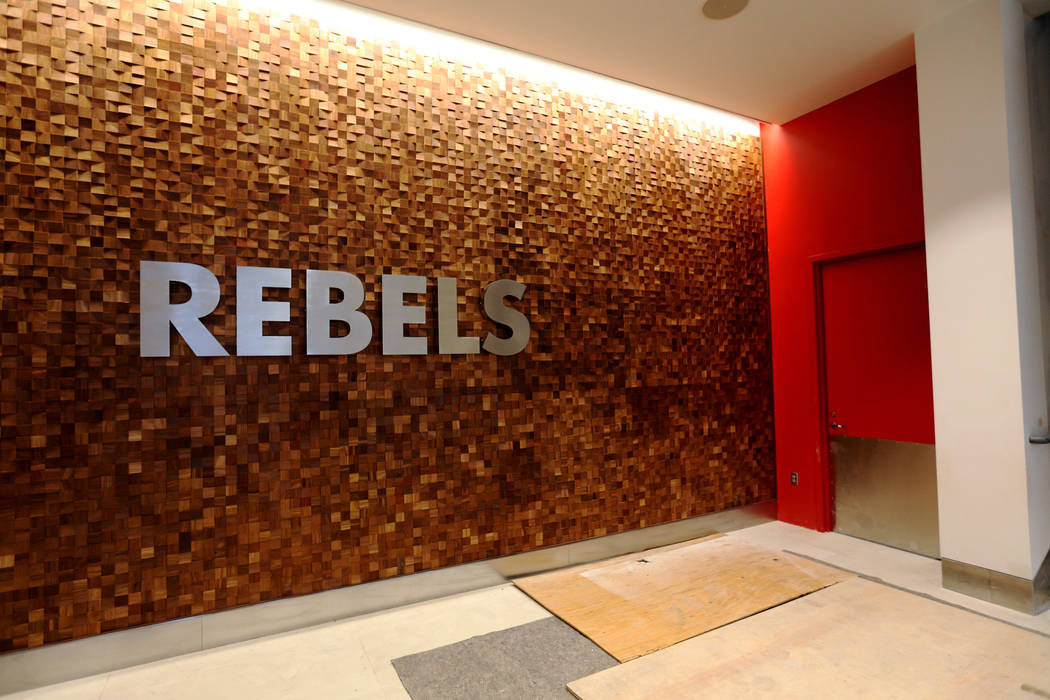 One of the top prep football prospects in the country, a 2021 recruit from Las Vegas, recently toured the Fertitta Football Complex at UNLV. He walked its wide halls and looked up at its tall ceilings, was shown the massive locker room and state-of-the-art weight room, saw the academic center in which players will study and gigantic dining hall in which they will eat, envisioned watching film in the vast theater and running on the underwater treadmill.

He thought about getting his haircut in the barbershop and playing video games in the team lounge and about all those flat screen televisions and digital components.

He soaked in all 75,000 square feet and its bells and whistles and stunning views from the top level.

“This is a kid who had already taken visits to Alabama, Georgia and Tennessee,” Rebels coach Tony Sanchez said. “And he looked at us and said, ‘I have seen the nicest facilities around and this one is as nice as any I visited.’ ”

“That tells me that while there has been a lot of talk about things we’re going to do here, you are now physically seeing it happen,” continued Sanchez. “It’s no longer a vision. You’re seeing the fruits of our labor. We didn’t build a facility to compete in the Mountain West.

“We built one to compete with the whole country.”

I wrote last November that Sanchez had done enough to warrant a fifth season as head coach, which he will begin Aug. 31 against Southern Utah. Not deserve a fifth season. I also wrote about a dear friend who is now 30, battling the most serious form of brain cancer, is married and has two daughters, both under 3.

Her cancer returned this week. She had another surgery. She deserves a better fate.

But what Sanchez absolutely deserves is every step of every tour, every ounce of credit for getting the football complex built. If you want to say he single-handedly raised from the dirt one of the most critical buildings in school history, well, foolish is the person who would argue.

“You can write it was 99.9 percent him,” said one leading Rebels donor. “And if you think that’s too much, then say 99 percent.”

Welcome to The House Sanchez Built.

When you enter the facility and look to the second floor and beyond a protective sheet of glass, you see a large empty space in the middle.

“That’s where we’re going to put the Fremont Cannon after we kick Reno’s ass every year,” Sanchez said.

The complex is something, all right, and when the last coat of paint dries, it will have cost in the neighborhood of $35 million, every penny of which Sanchez played a major part in raising. There is expected to be a soft opening sometime in September and things totally operational come October, but this is far more about the future than present.

Already, the building has paid off with several commitments for the 2020 recruiting class, pledges from the sorts of players who likely would have never considered UNLV had it not made such dedication to an on-campus facility, along with the reality of making a new NFL stadium home next year.

How long Sanchez himself will be able to reap the benefits of the building is unknown, with athletic director Desiree Reed-Francois making it clear at the conclusion of last season that she expects the Rebels to be bowl eligible in 2020.

It’s the life he chose, the profession he’s in, the reality of his world.

“I’ve never worried about it,” he said. “You can’t let things stress you out or get in the way of doing your job. I’m proud of everything we have done here. I apologize for nothing. Someone had to take it on the chin to get this program moving forward and I’ve done that.

“I was told a long time ago that if you’re always thinking about your next job and that’s your motive, how can you take care of the one in front of you? We didn’t panic and cut corners and go for a quick fix. We said we’re going to do things the right way and build this building, because it’s the one thing that can move this program.

When our tour was complete, Sanchez walked the small group back to adjacent trailers, where vests and hard hats were turned in. He looked at the foreman and said, “Thanks, again. This will be the last one for a while.”

Maybe, but Tony Sanchez deserves to beam with pride and offer such invitations to see the facility round-the-clock.

After all, he built the damn thing.