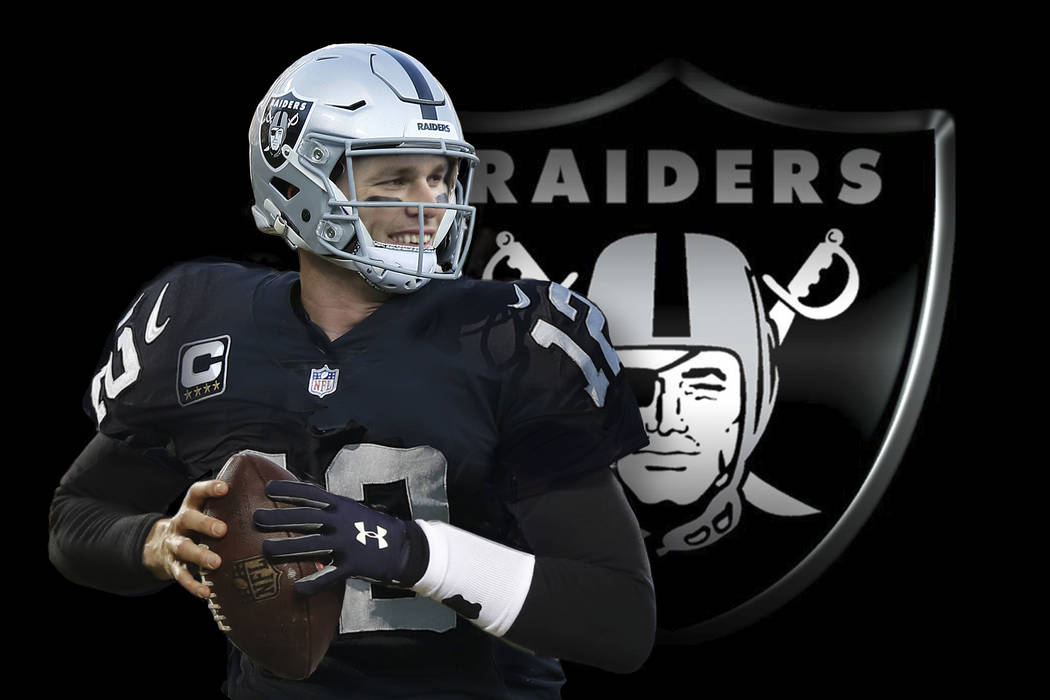 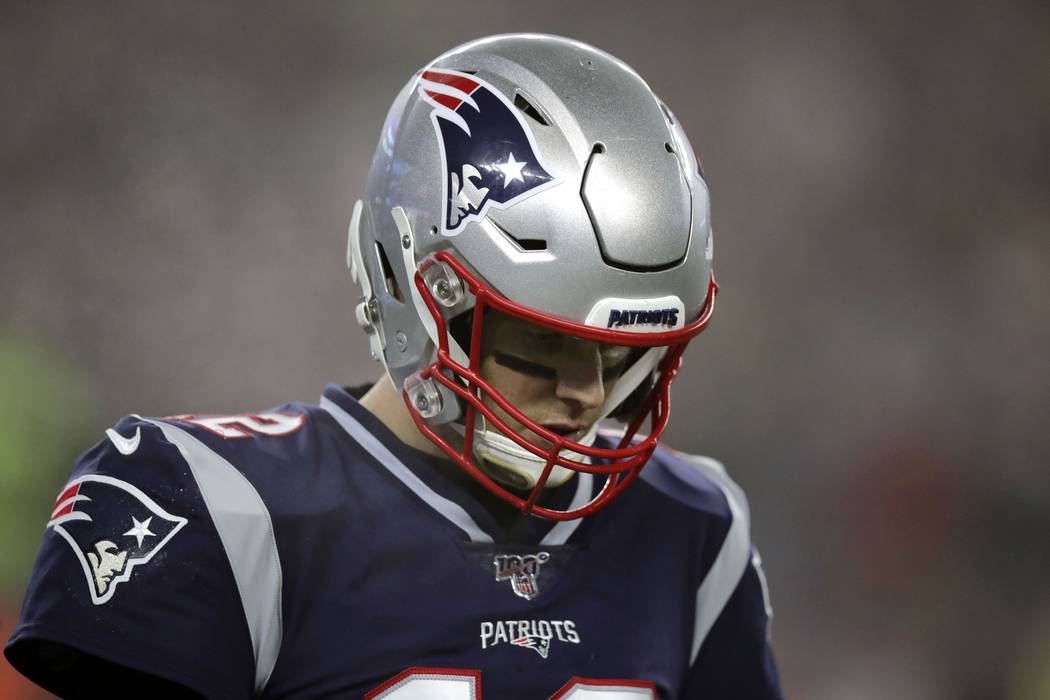 New England Patriots quarterback Tom Brady walks to the sideline after a series of plays in the first half of an NFL wild-card playoff football game against the Tennessee Titans, Saturday, Jan. 4, 2020, in Foxborough, Mass. (AP Photo/Charles Krupa) 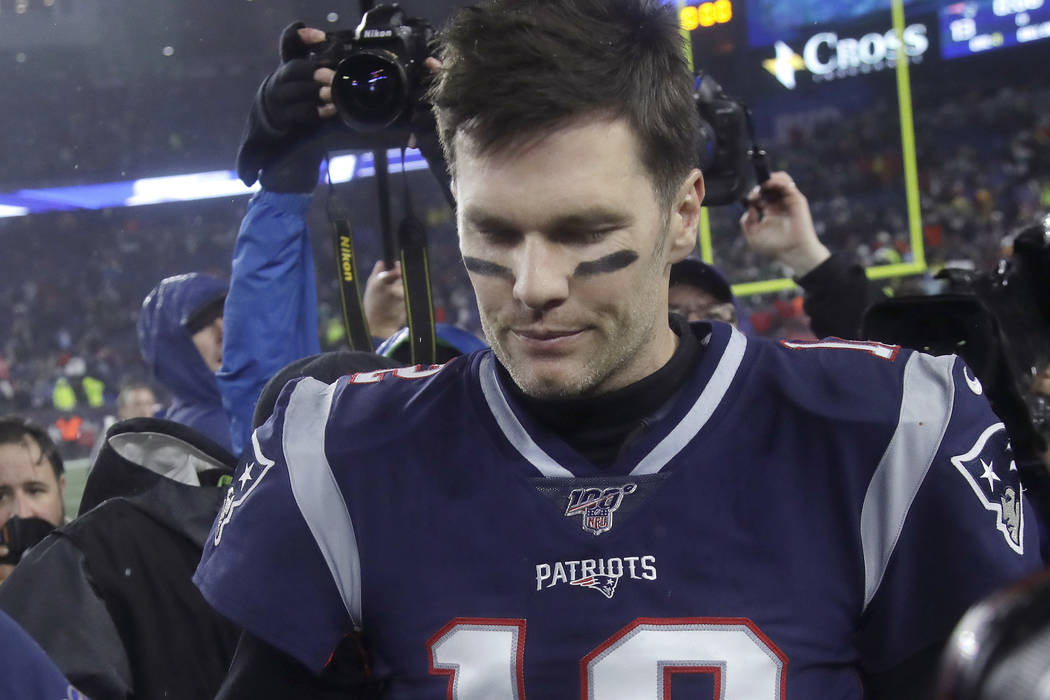 The immediate consensus might be that I drew the short straw in this debate. Come on, Tom Brady, Mr. Tuck Rule himself, ending his Hall of Fame career with the Raiders? But remember, out of limitation comes creativity.

About those limitations: I’ll admit there are factors that would curtail Brady from even considering the option of relocating his game and family to Las Vegas.

Imagine how much this guy would fear Nevada’s water shortage.

So let’s get imaginative about it, and I’m liking my odds of building a case beyond the fact that Brady and wife Gisele Bundchen reduced the asking price on their Massachusetts mansion to $33.9 million.

If that’s not the type of sacrifice that screams a desire to bolt for a silver and black horizon, what is?

But how TB12 and his regimented diet and obsession to hydrate would go from leaving the Patriots and Bill Belichick to signing with the Raiders and Jon Gruden is a bit more complex than accepting fewer zeros on a home sale.

First, the Raiders have a franchise quarterback.

Brady becoming a Raider would mean Derek Carr is no longer one, the latter scenario certainly being debated within the organization, whether the quarterback with six Super Bowl rings would consider Southern Nevada or not.

For argument’s sake, given this particular one doesn’t make sense with Carr in the picture, we’ll assume Gruden and general manager Mike Mayock decide to move on from him.

Brady has never come off as any sort of veteran bridge option willing to help groom a younger quarterback, and for good reason. He just keeps winning rings.

But he has also never entered an NFL season at age 43, which he will do in 2020. Father Time might have delayed a visit to this point, but the quarterback who managed to produce just 13 points at home in losing to Tennessee in a wild-card playoff game Saturday won’t perpetually avoid such a call.

The Raiders own the No. 12 and 19 picks in the first round of the NFL draft. Whether they packaged them to trade up and select a top prospect like Tua Tagovailoa or Justin Herbert, or waited to select someone such as Jordan Love from Utah State, what better quarterback to learn under than Brady?

He would be the greatest bridge in history, a virtual Golden Gate and Brooklyn and Akashi-Kaikyo rolled into one.

He would also immediately reset and improve the culture of a locker room.

Now, all of this would take some doing. Gruden would have to produce his most compelling sales pitch yet, somehow convincing Brady that the Raiders’ defense isn’t really as bad as it appears and the team will use the draft and free agency to improve it while surrounding him with suitable skill.

Gruden would have to paint a clear portrait as to how Las Vegas can win a Lombardi Trophy over the next few years.

Wouldn’t this also allow Brady the opportunity to prove he doesn’t need Belichick or the New England system to become a champion? Wouldn’t this be as ideal a situation as any to fully embrace his competitive nature?

I get that Brady hasn’t run the West Coast offense or been schooled on its terminology. So?

That’s more about want than inability. Brady could adapt and succeed in any system if he so desired.

He would also have, when it’s healthy, a better offensive line protecting him than anything New England trotted out of late.

Joe Montana wore a Chiefs jersey. Peyton Manning won it all in the orange of Denver. Brett Favre played for the Jets and Vikings. However it has occurred — via trade or free agency — the idea of all-time greats finishing up in foreign colors isn’t an impossible notion.

There it is. The odds might be stacked against it, but if there is a Hail Mary available to land the best quarterback for the Las Vegas Raiders in an inaugural season, damn it, throw the thing and get the one guy who could produce immediate glory.