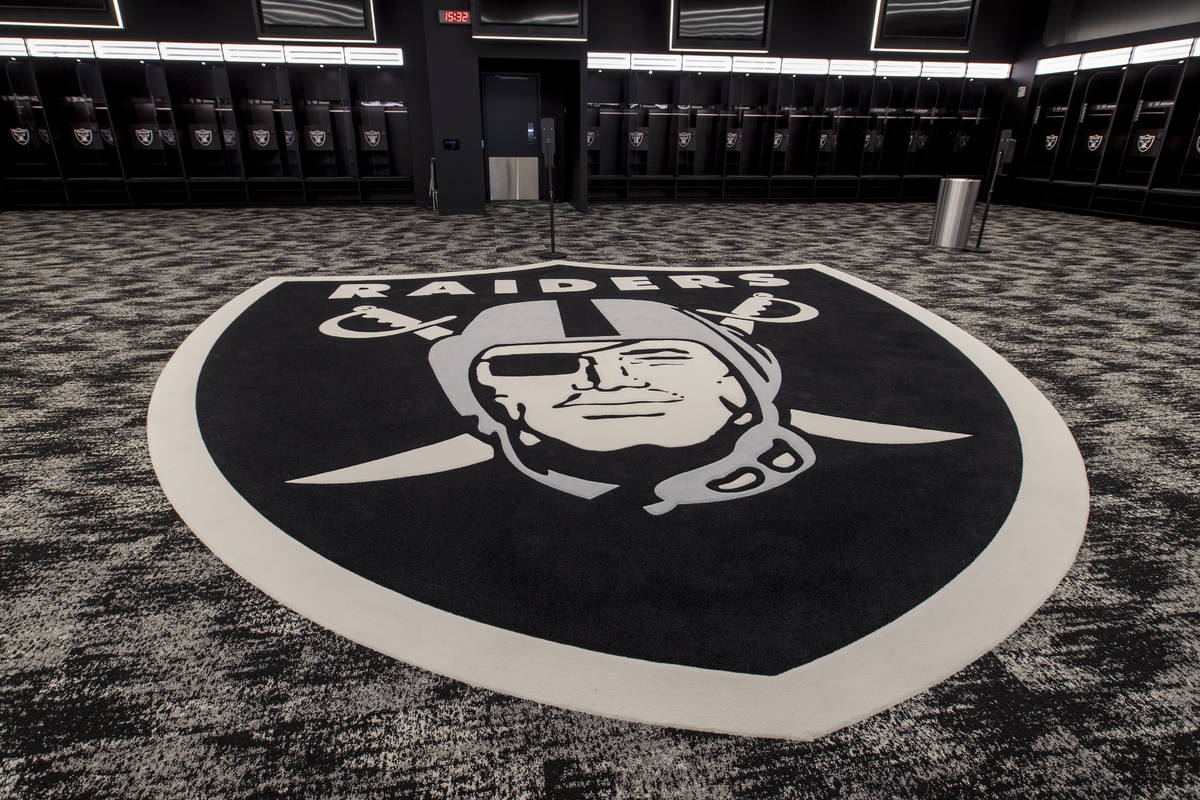 The locker room for the Las Vegas Raiders features a large logo and plenty of room to move for players use at Allegiant Stadium starting with the inaugural home game Monday night on Friday, Sept. 18, 2020, in Las Vegas. (L.E. Baskow/Las Vegas Review-Journal) @Left_Eye_Images 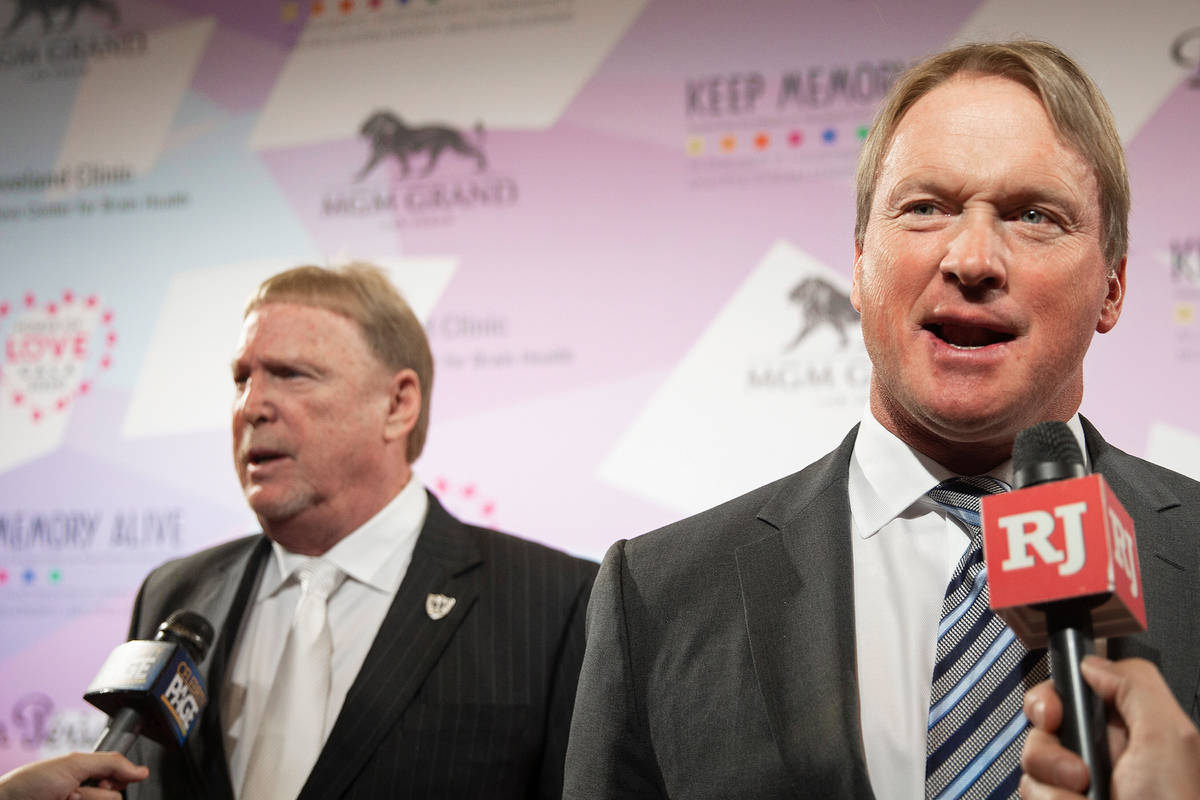 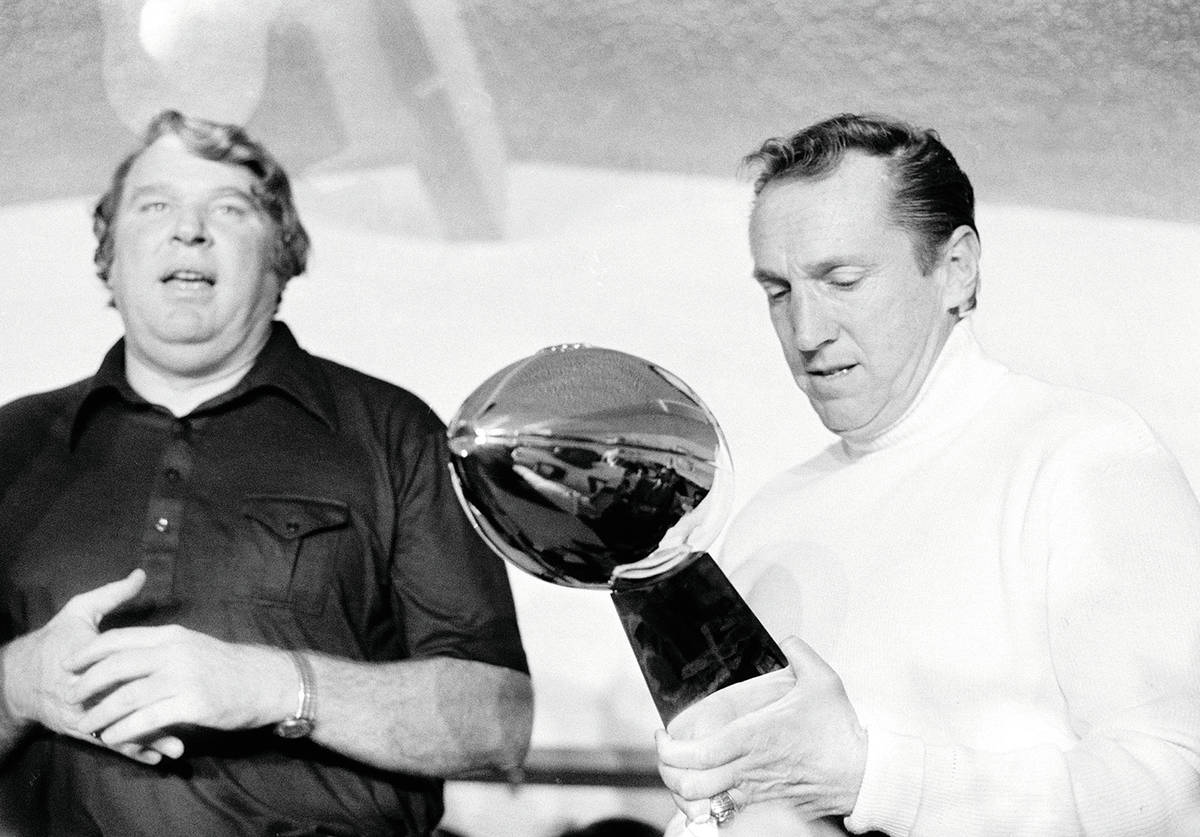 FILE - In this Jan. 9, 1977, file photo, Oakland Raiders coach John Madden, left, talks as team owner Al Davis holds the Vince Lombardi Trophy after the Raiders' 32-14 victory over the Minnesota Vikings in Super Bowl XI in Pasadena, Calif. Davis, the Hall of Fame owner of the Raiders known for his rebellious spirit, has died, the team announced on Saturday, Oct. 8, 2011. (AP Photo/File) 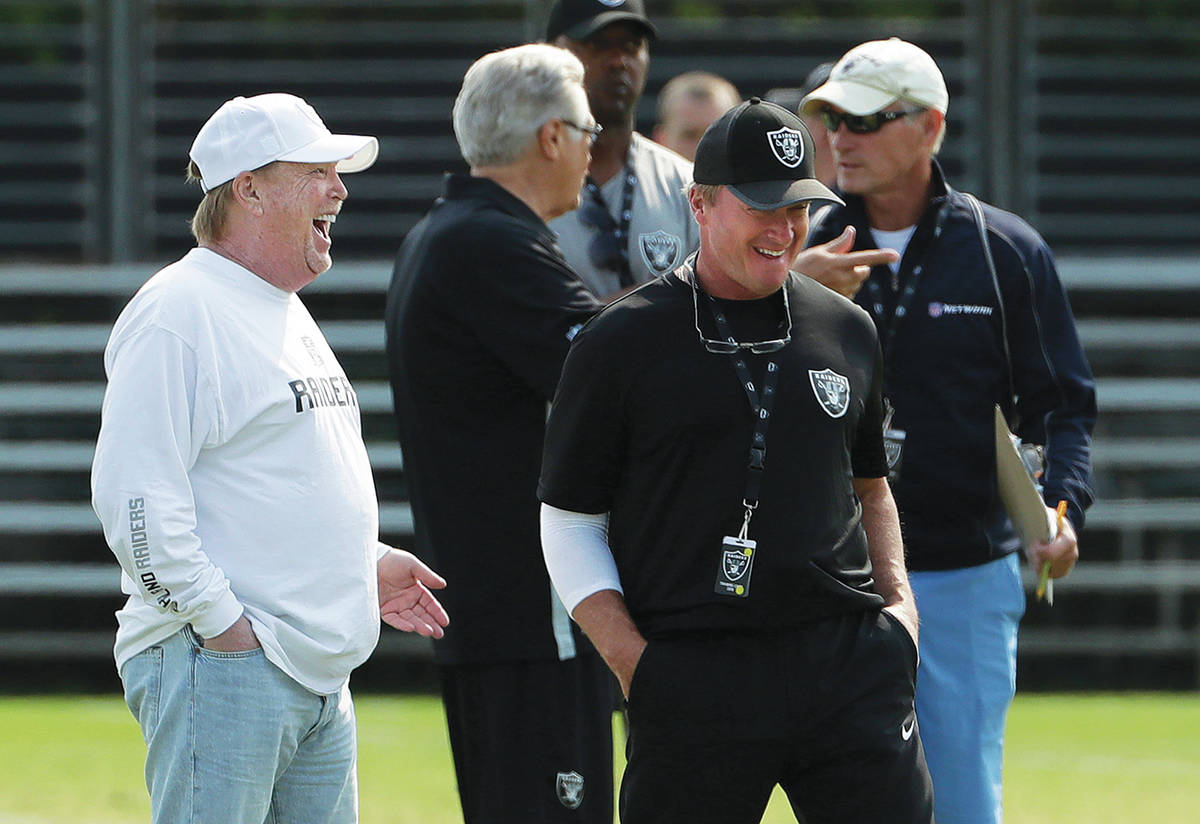 Once that was the rallying cry for the Raiders when they were the winningest team in pro football.

Now, as the 7-8 Raiders end yet another non-playoff season Sunday against the Broncos at Empower Field at Mile High, it haunts them.

History has a way of fading. The Raiders will have now missed the postseason for a 17th time in 18 seasons, a seemingly endless stain on what was once the most dominating of franchises.

Such mediocrity hasn’t gone unnoticed by those who came before, who played in and knew very different and better times.

If it’s true that no legacy is so rich as honesty, here’s the cold-hard truth: The team of three Super Bowl titles and four conference championships and 21 playoff appearances and just seven losing seasons from 1963-2002 hasn’t been much of an NFL factor in nearly two decades.

“It drives me crazy to see what has happened,” said former Raiders linebacker Phil Villapiano, a member of the Super Bowl XI-winning team from the 1976 season. “There is no semblance right now of what we built and created other than the colors silver and black. I would die for the Raiders, man. That’s the way we all were. That’s what it meant to be a Raider.”

Villapiano said he knew what the Raiders stood for even before they drafted him in 1971. It seemed everyone did. “They were bad-asses. A wild bunch of guys,” he said.

He gladly joined in and reveled in the fun. “They would need to cut off the sideline mics on television after five minutes because of the profanity,” he said. “That was our world.”

It was a world they dominated. “We became the juggernaut of the league,” Villapiano said. “We were the best. Let’s not kid ourselves: It’s not that way now. I don’t think anyone is dying for the Raiders …”

No team in sports does a better job bridging its past with the present than the Raiders. The team’s alumni, owner Mark Davis has often said, is the franchise’s most valuable asset.

From the moment NFL owners approved in 2017 the relocation from Oakland to Las Vegas, past players found themselves in Southern Nevada championing the brand they so deeply cherish.

Each alumni member received an honorary legacy brick at Allegiant Stadium. Those players mean the world to Davis.

But the connection with a current roster, like so many things this past year, was paused when COVID-19 hit.

There haven’t been as many opportunities for young to meet old(er), for new to encounter those who set the foundation and then carried on a winning tradition, for players then and now to embrace the Las Vegas community as intended.

Life, as Davis says, got in the way.

“It saddens me,” Lincoln Kennedy, a three-time Pro Bowler who anchored the team’s offensive line in Super Bowl XXXVII and is now part of the Raiders’ broadcast team said of the momentum the franchise has lost.

“We built something rewarding. The team and Raiders Nation fans — it was a beautiful thing. Family. That’s what being a Raider meant more than anything. It always will for me.”

It also meant winning, Kennedy said, and that has gone by the wayside as well.

“What you see in the product today is disheartening. You don’t know what to make of it. It’s wrong to be overly critical because this year has been so crazy for everyone, but I don’t make excuses for anything. I’m not into moral victories. You are graded on your performance and it hasn’t been good enough.”

Building on a legacy

Rod Martin is a two-time Super Bowl champion with the franchise who played linebacker over 12 seasons in both Oakland and Los Angeles. His teams went a combined 120-74.

“It’s true we had some great players, so you always wanted to emulate those who came before,” Martin said. “You wanted them to show you the way as a Raider.”

He said the current players need to get back to being more like those Raiders. “It’s a mindset. … Get mad about not winning. Get angry. … We never lost like this. That was for the Chargers back then.”

If there is to be a return to glory, the alumni seem sold that Jon Gruden, who in the late 1990s built a Super Bowl roster for the Raiders, is the right coach in charge of such a reclamation project.

That no matter how things have gone since his return as head coach three years ago — the Raiders are 18-29 since — brighter times are ahead with him and general manager Mike Mayock running the football side of the operation.

It was at a training camp practice in August when Raiders quarterback Derek Carr paid homage to franchise legend Ken Stabler, who was inducted into the Hall of Fame posthumously in 2016.

The seven-year starter has grown close to several alumni as he breaks more and more team passing records. If there is a Raider of today who has the most respect for the team’s past, it’s Carr.

“Just being around this organization for seven years, I’ve had the opportunity to meet some of the greatest players our game has ever seen,” he said. “When I talk to these guys, you can just feel this aura about the Raiders that comes off of them no matter what, no matter who else they played with.”

Re-establishing that culture, that winning culture, “is always important,” Carr said. “Until I’m done playing, I’ll give everything I have.”

Davis has been there from the beginning, a young boy watching as his father arrived in Oakland as the head coach in 1963 and ultimately became the principal owner and general manager from 1972 to his death in 2011.

And what being a Raider as a player or fan meant to the son then and now hasn’t changed: They are folks of various colors and cultures and backgrounds who gather to compete and cheer on Sundays for a common cause.

“Raiders are all different kinds of people and characters who come to win,” Davis said. “We need to get back to those times. Since my father passed away 10 years ago, I haven’t done a good enough job because we’re not winning. It starts with me. I take ownership. I’m at the top of the food chain.”

The team’s past is ever-present in Davis’ mind.

“All those slogans you hear about the Raiders — Pride and Poise, a Commitment to Excellence, Just Win — are still very important to us. They’re not just idle statements. Those things will never change.

“We just haven’t done enough of it on the field.”