NFR dirt is the most important part of the rodeo 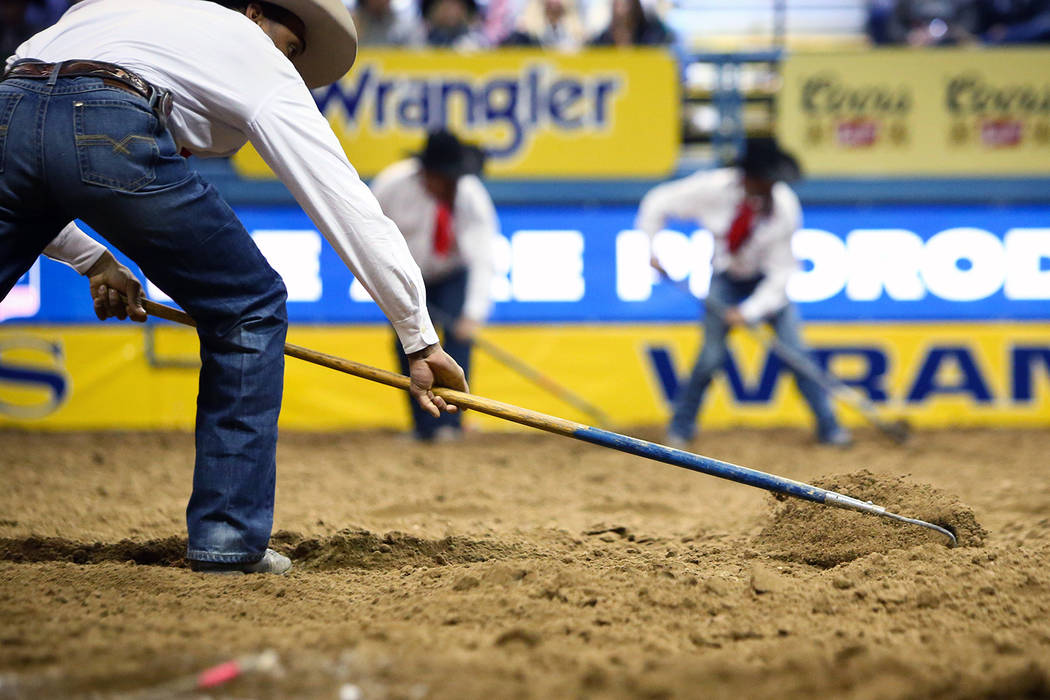 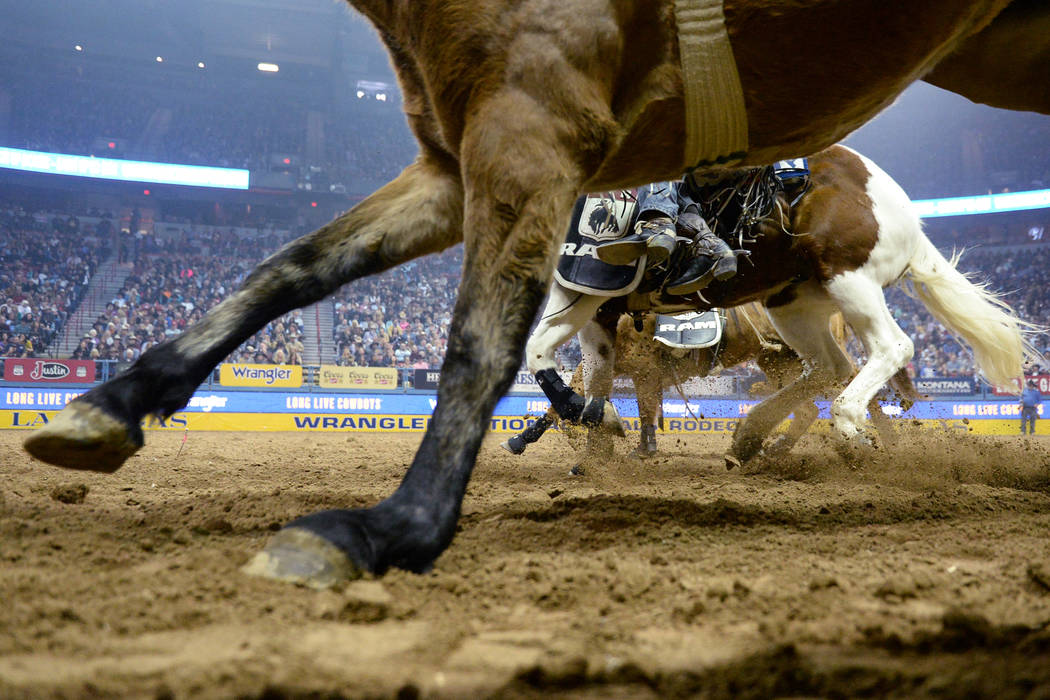 A line of horses run through the arena during the sixth go-round of the National Finals Rodeo at the Thomas & Mack Center in Las Vegas, Tuesday, Dec. 11, 2018. Caroline Brehman/Las Vegas Review-Journal 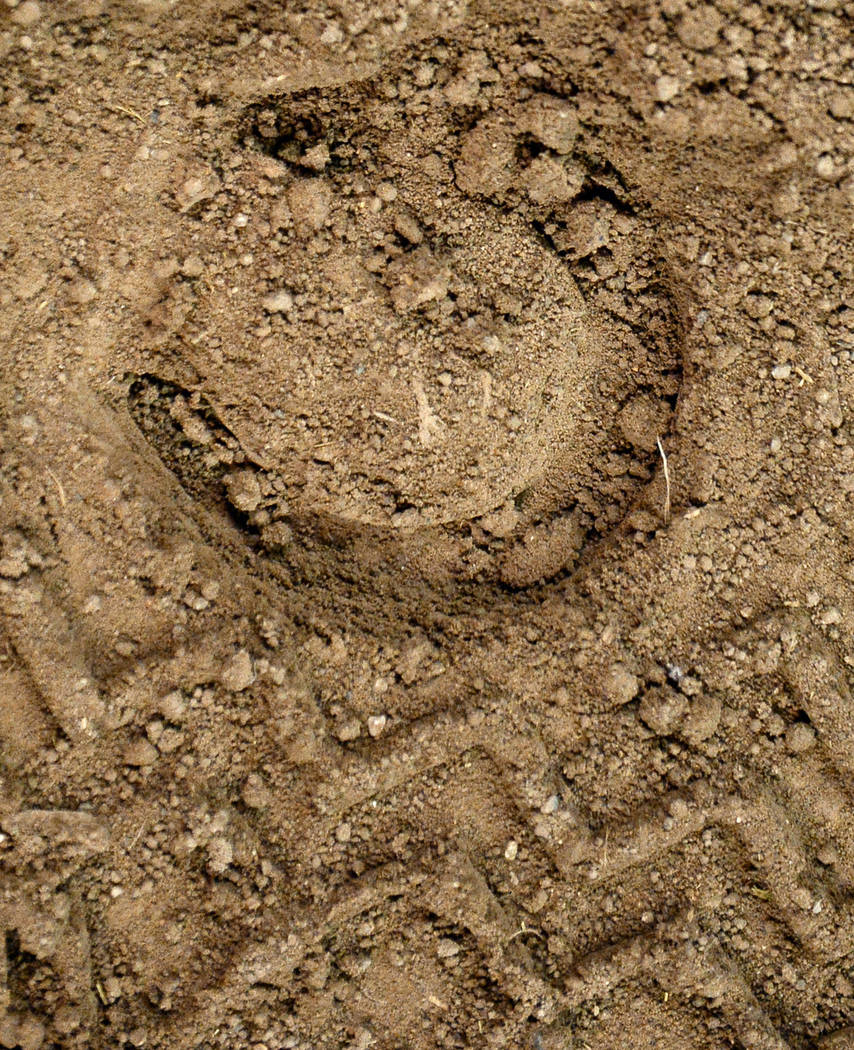 A horseshoe footprint is left in the dirt in the arena where the National Finals Rodeo is taking place at Thomas & Mack Center in Las Vegas, Tuesday, Dec. 11, 2018. Caroline Brehman/Las Vegas Review-Journal 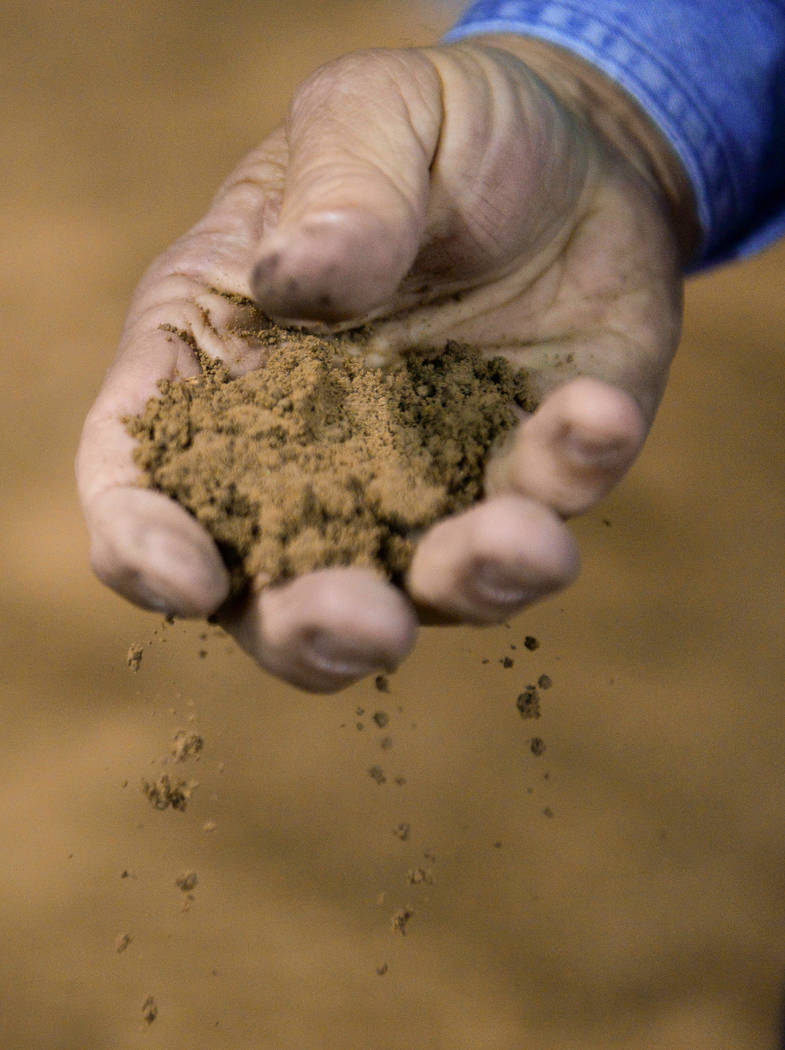 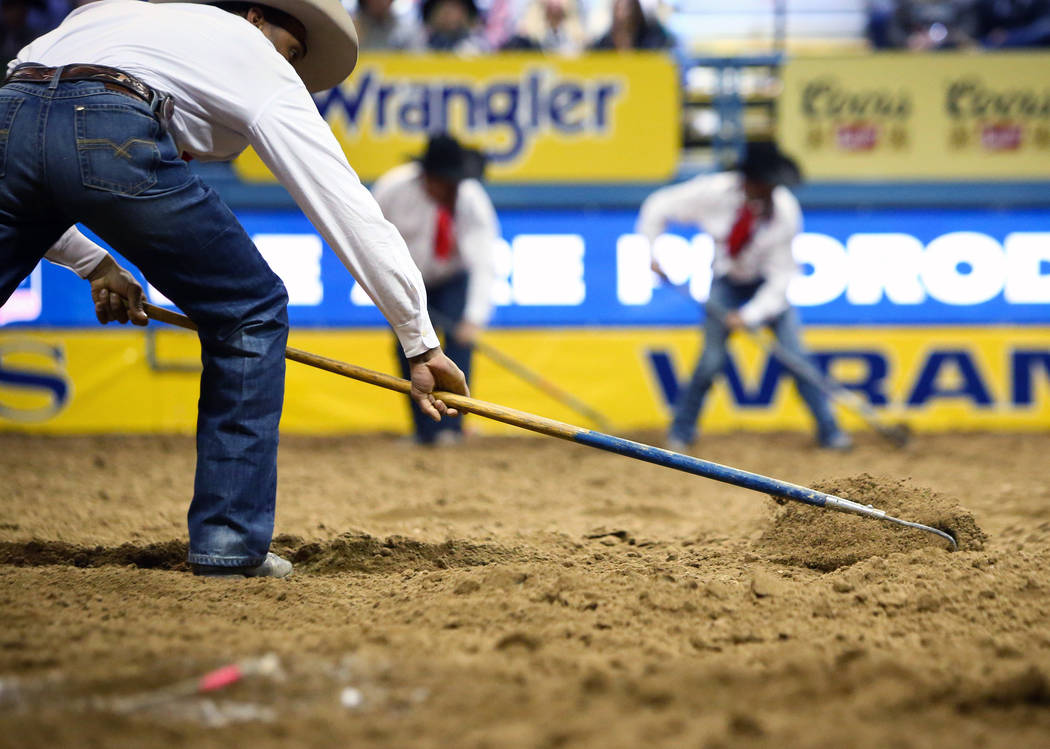 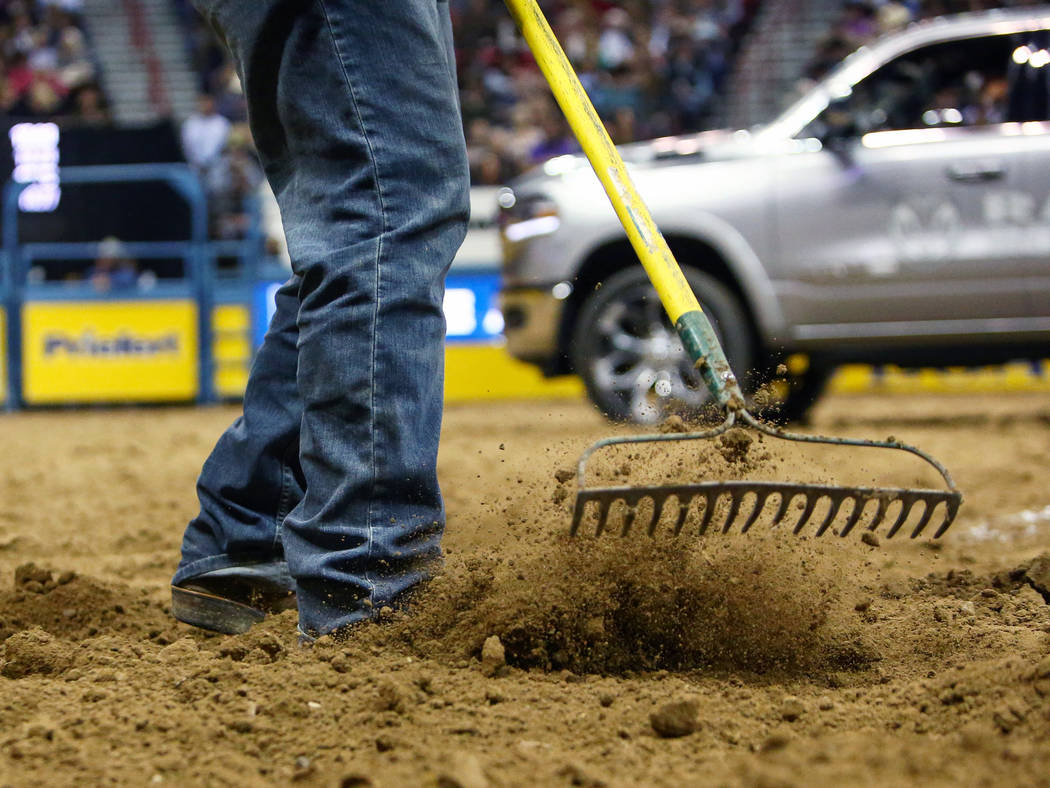 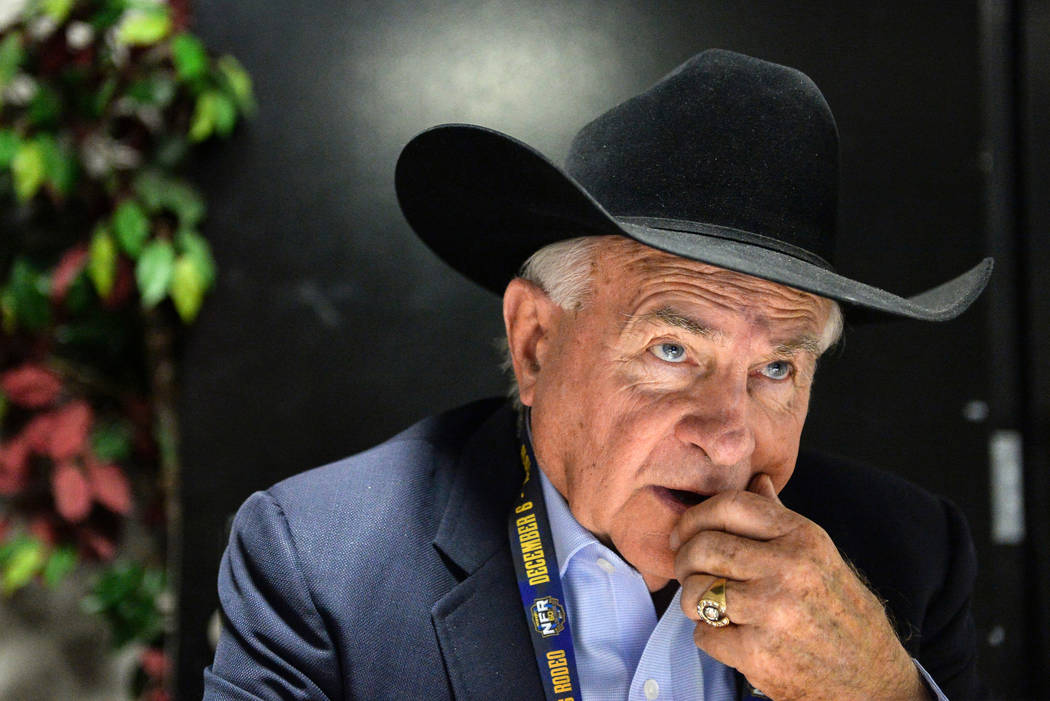 GM Sean Davis talks about the preparation that goes into getting the dirt into the stadium at Thomas & Mack Center in Las Vegas, Tuesday, Dec. 11, 2018. Caroline Brehman/Las Vegas Review-Journal 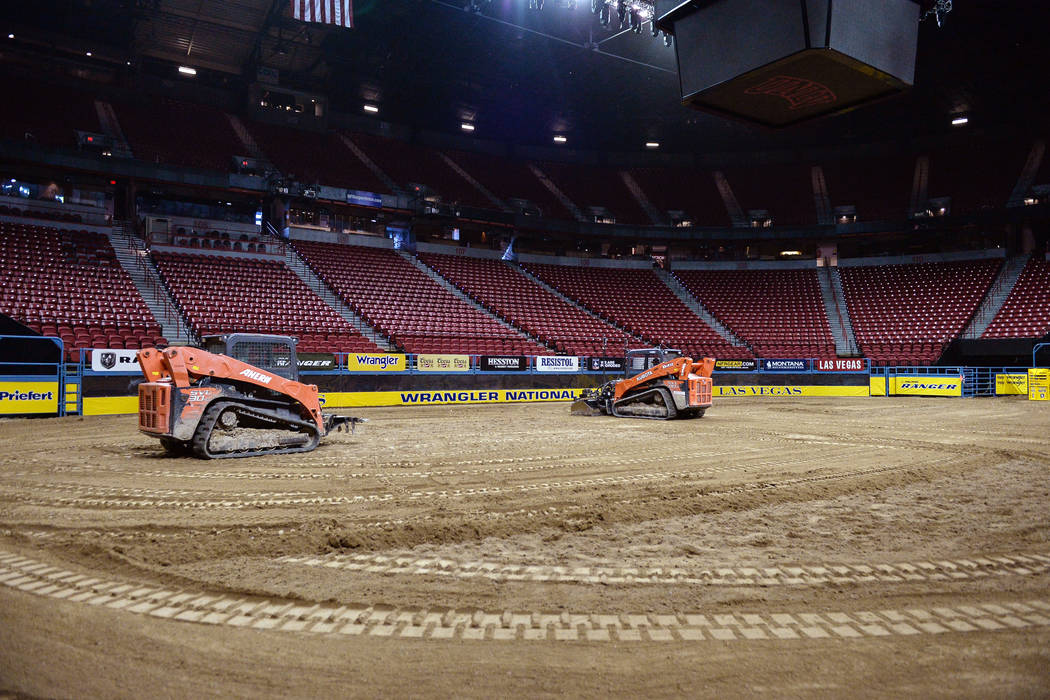 Maintenance workers level out the dirt in the arena in preparation for the sixth go-round of the National Finals Rodeo at Thomas & Mack Center in Las Vegas, Tuesday, Dec. 11, 2018. Caroline Brehman/Las Vegas Review-Journal 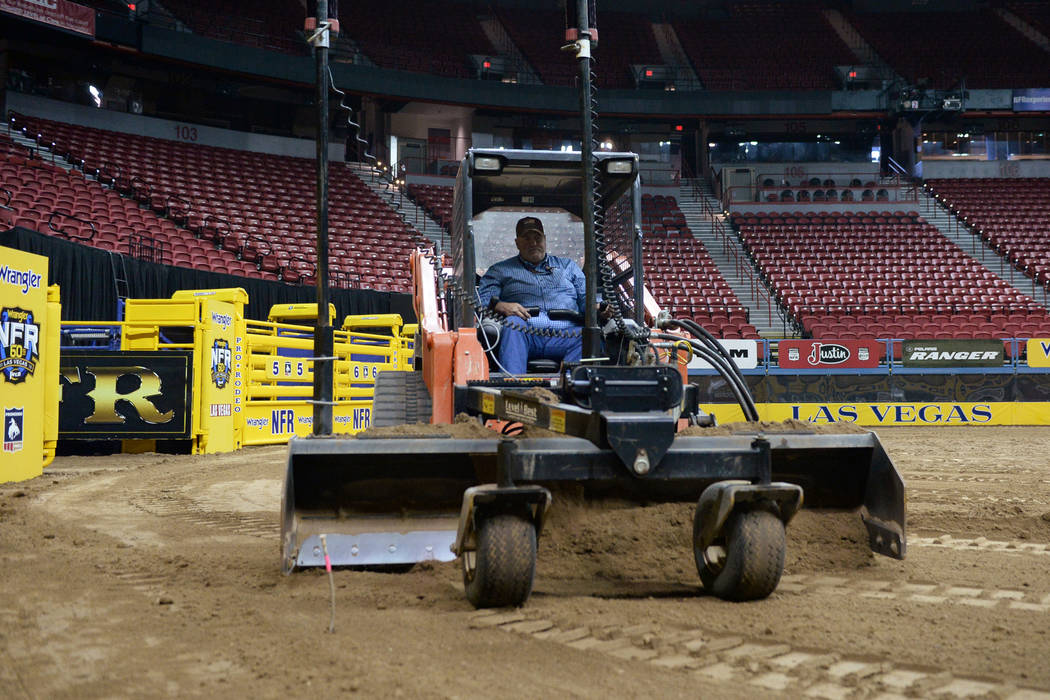 Construction Maintenance Manager Allen Rheinheimer levels out the dirt in the arena in preparation for the sixth go-round of the National Finals Rodeo at Thomas & Mack Center in Las Vegas, Tuesday, Dec. 11, 2018. Caroline Brehman/Las Vegas Review-Journal 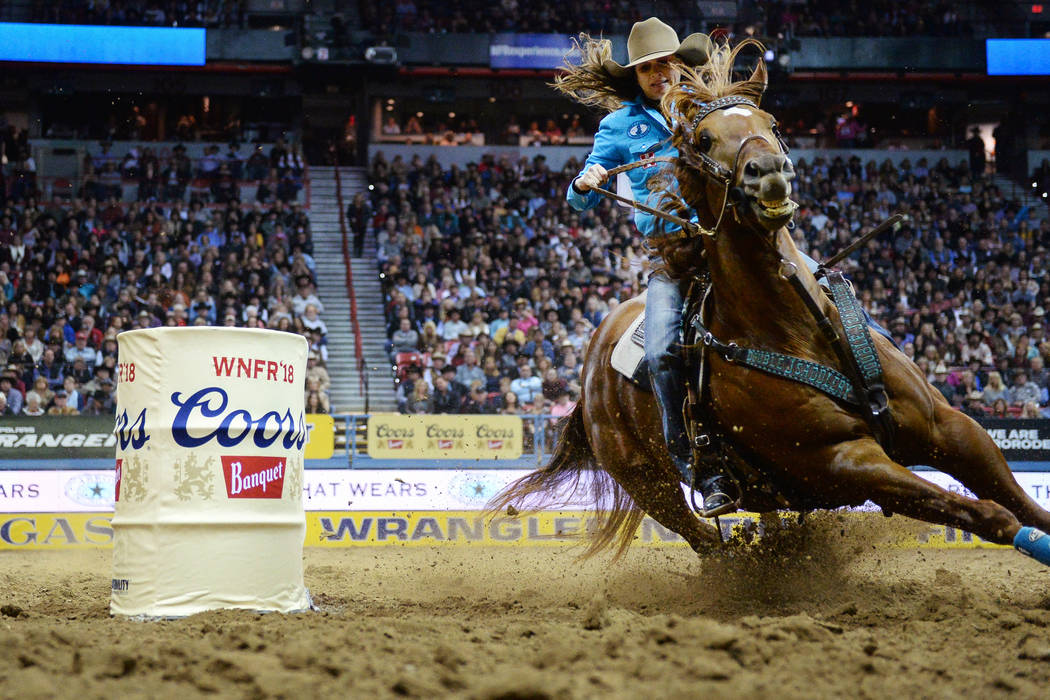 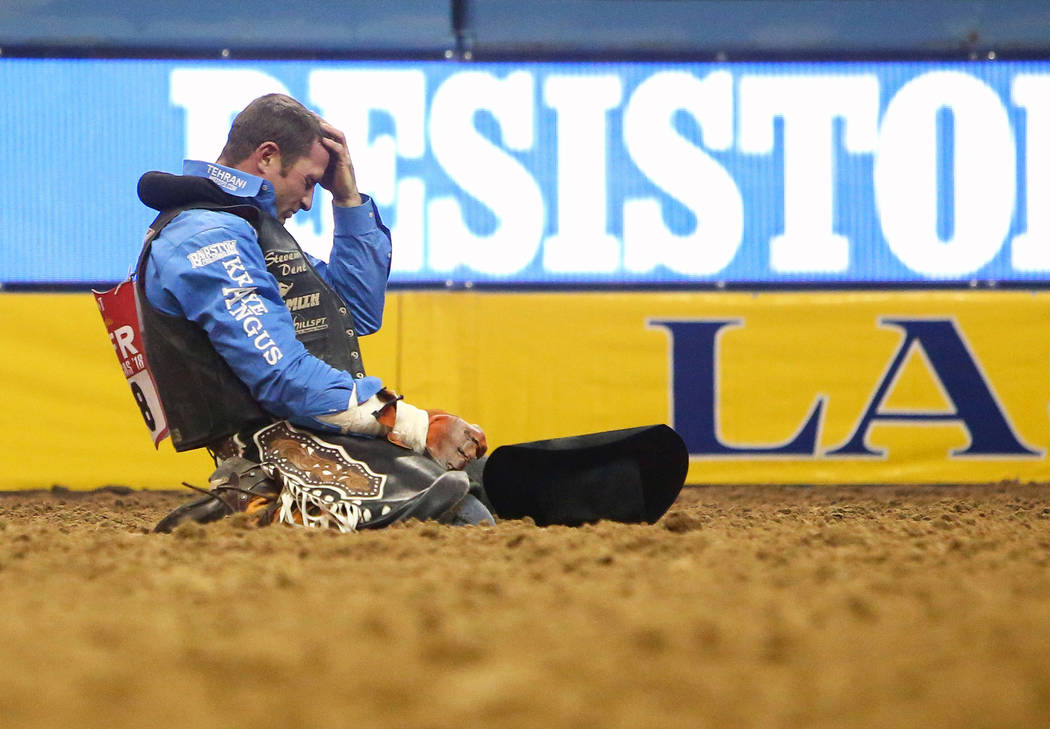 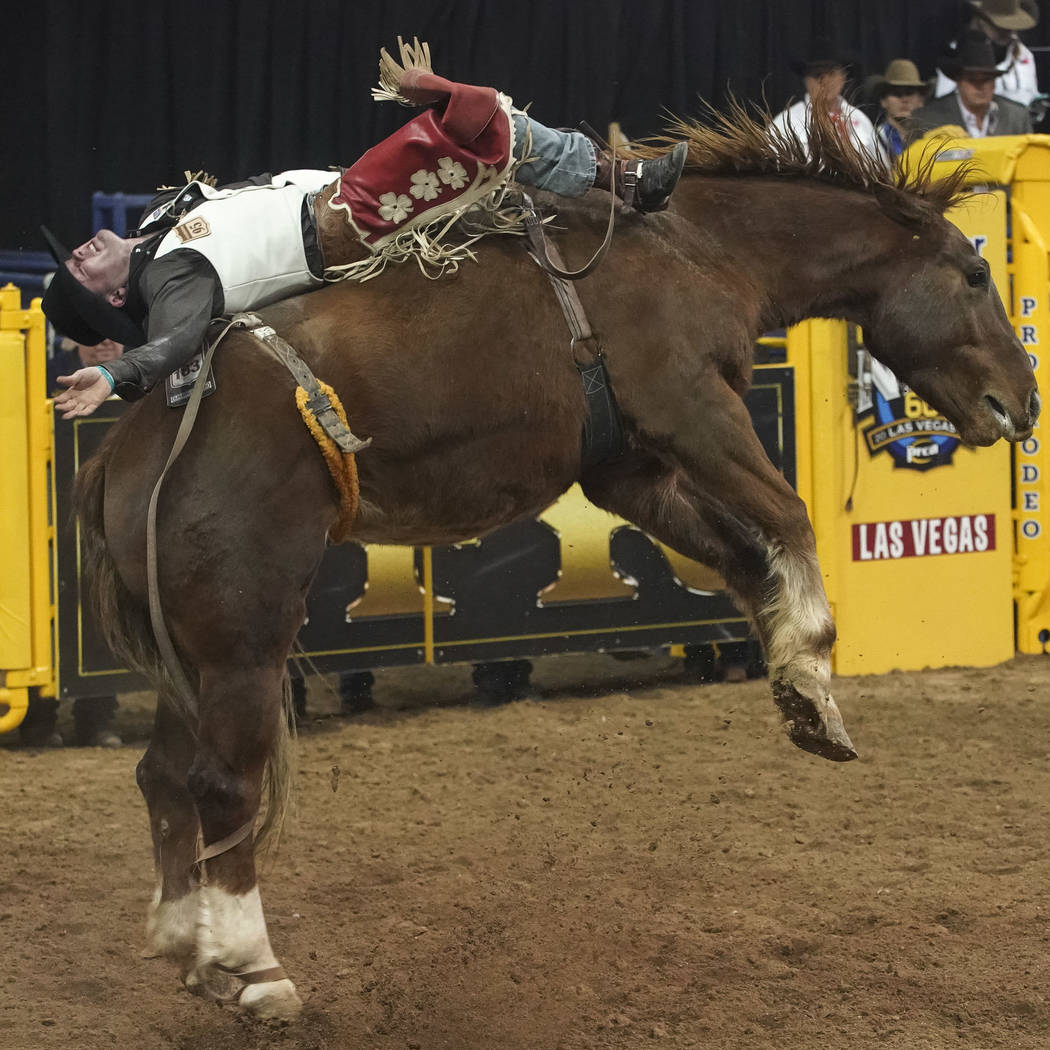 This is a column about dirt, and I have never felt dumber in my life.

John Jamison was nice enough not to laugh as I stared blankly through his explanation of how important soil is to the arena floor at the National Finals Rodeo, patient enough to pause between points about aluminum sulfate and triple superphosphate and placidity and pliability and capsulating carbonates from water in Nevada.

Kind enough not to throw a clump of it at me when I wondered: You mean fertilizer?

Jamison has built racetracks from Indiana to Peru, has spent 40 years studying the surface on which different horses run and perform, knows more about pedology and edaphology than Steph Curry does the mechanics of a jump shot.

“I like to say this isn’t an exact science, but there is a lot of science to it,” Jamison said. “Cowboys are probably the most amicable pro athletes there are because they realize a lot goes into this, but that’s not to say if they get beat, they’re not going to look for a scapegoat.”

And if it’s not them or the horse, it must be … the dirt?

The eighth go-round of the NFR played out Thursday night at the Thomas & Mack Center and, like always, Jamison as the ground manager spent his time beforehand measuring and laser testing and watering and tending to the dirt, of which 1,200 tons at 12 inches deep lay across the floor where seven events are contested nightly.

In all, 2,500 tons are delivered to the home of UNLV basketball a few days before the NFR commences, spread out over six hours and then, following the 10th and final go-round, packed and stored behind the arena until next year.

Which means on those nights folks think the Rebels stink, well, the odor might be more than just their offense.

Jamison works for Allen Rheinheimer, the NFR’s construction maintenance manager, who works for Sean Davis, the outgoing general manager, who remembers those final days in Oklahoma City, where the event took place for 20 years before moving to Las Vegas in 1985 and the dirt was all sorts of trouble in the end.

“The year before we moved, the texture wasn’t right and all the barrel racing horses fell,” Davis said. “So when we came here, we wanted to make sure that didn’t happen. Now, there are a lot of places you can go find good dirt, but back then in Las Vegas, you had clay or sand or rocks. So we started out with a lot of trial and error to get it where we wanted over time.”

Think of a cowboy or cowgirl as an NFL player deciding which cleats to wear on a certain surface, be it grass or turf.

The ones atop bucking stock need the horse to plant and jump off the top layer. Those in timed events need it to slide. Those racing around barrels need it to dig as much as 8 inches deep when turning.

It’s different from one end of the arena to the next. You don’t want it looking like a perfectly manicured infield at Dodger Stadium. Jamison doesn’t just drag the dirt. He rips it, tills it, packs it, breaks it up.

From the top level of particles all the way down to silt and every compaction rate in between, footing is brought to the surface.

Then you have Monday, when this happened …

Translation: A great night for dirt.

“A great night for cowboys and cowgirls,” said Rheinheimer, who has worked the NFR since 2000.

The truth: Nevada dirt is good for building roads. It blows for a rodeo.

So to reach a happy medium for the NFR’s needs while not having to pay a small ransom to transport the great stuff from, say, dirt heaven of South Hampton, New York, Jamison and Rheinheimer continue to assess the surface daily, ensuring it’s flowable and workable, amending the makeup of it while always remaining aware of things such as atmospheric pressure.

Moisture, it seems, can really mess with the final product.

“You don’t want it shiny,” Jamison said. “You want some texture to it. It has to be able to move and push and have some side pressure to it. It has to hold up for one event as much as it does for a completely different one. Then this ends, and we begin screening and testing it all over again for next year.”

They say cowboys aren’t afraid to get dirty.

Who knew so much went into it?