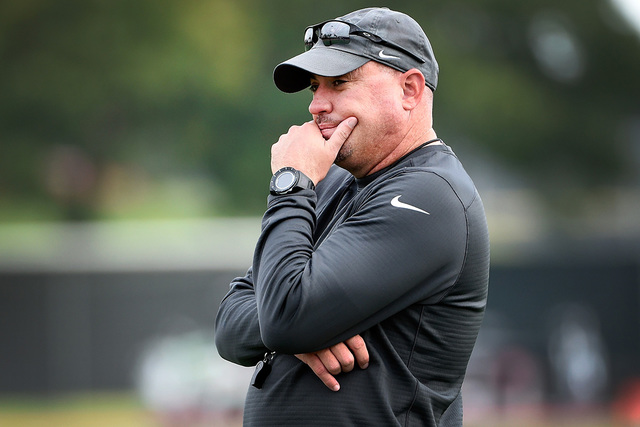 SAN JOSE, Calif. — It was about how most would expect Tony Sanchez to address his UNLV football players minutes before kickoff, all intense and fiery, his arms punching through air and his voice rising when speaking about embracing the opportunity and fighting and bleeding and winning together.

He was Lou Holtz without the lisp.

The video clip of Sanchez before last Saturday’s home game against Colorado State showed a coach whose raw emotions undoubtedly were designed to motivate his team, one coming off a last-minute victory at Hawaii and favored to beat a Rams side that has endured its own struggles this season.

Sanchez was like a prize fighter ready for battle, which made this all the more perplexing: His team never left its corner at the first bell.

“First of all, I love our guys,” Sanchez said. “They’ve worked hard and at times done a great job fighting through adversity and playing above their heads. I don’t lack confidence in them. But it’s an interesting dynamic, when you’re in that locker room and you’re fired up and ready to go, and you assume the guys are just as excited and ready to fight right there with you.

UNLV found itself in a crater the size of Chesapeake Bay.

The challenge now for Sanchez and the Rebels is to move past the 35-0 halftime deficit against Colorado State, beyond the horrendous start that ultimately resulted in a 42-23 loss, and regroup against yet another defective Mountain West opponent in San Jose State on Saturday night at CEFCU Stadium.

UNLV must win three of its final four games to reach bowl eligibility, and while it is favored on the road against a Spartans team that is 2-6 and being outscored by two touchdowns on average, nothing is certain for a Rebels side that appeared utterly disinterested over 30 minutes against Colorado State.

You can see on film when a player misses a tackle or runs the wrong route or whiffs on a block, all mental lapses that are correctable by the next snap.

You can measure things such as speed and strength and body fat.

You can chart the heck out of a player’s physical tools.

But what about his temperament?

What about those traits that make him tick?

There is a reason people believe expectation is the mother of all frustration, because it’s impossible at times for any coach to gaze into the minds of young men and correctly assess their level of desire in a given moment.

Want to drive yourself nuts?

Climb inside those brains for a few minutes, if you dare.

UNLV played with more energy on the first snap of offense and defense in the second half than it did for those opening 30 minutes against Colorado State.

Maybe pride set in. Embarrassment can be a powerful thing. Maybe the halftime Sanchez was as animated as the pregame Sanchez, only with a much different message delivered in a not-so-positive tone.

But what happened against the Rams is also not totally uncommon, especially for a team still learning how to deal with any semblance of success, like coming off a road win as a near 10-point underdog and then being picked to win the following week at home.

If physical toughness is paramount to UNLV building a winner, so, too, is how mature the Rebels become above the neck.

“There is no team in our conference that’s good enough to come out and survive the kind of first half we had (against Colorado State),” Sanchez said. “We have to understand the importance of urgency and coming out and playing with it. We’re not the type of team that can fall behind and come back from it. The hole is a little too deep for us.

“You don’t want fake energy. We can’t get so caught up in we have to be perfect and we have to win a game. We were out there trying not to make mistakes instead of just letting your hair down and playing. The kids got frustrated. The coaches got frustrated. The frustration overwhelmed our sideline. We need to do a better job of just rolling with things.

“Football, life, it’s all about regrouping when adversity hits. Now, we have to respond. We have an opportunity to go win our fourth game of the season.”

I’m guessing he will be just as intense and fiery and passionate before this game, arms punching through air and voice rising.

Question is, how will his team respond at the first bell?

UNLV isn’t good enough to throw in the towel for a second and expect to beat anyone, meaning it better sprint from its corner with a barrage of combinations.

It’s absolutely true: Before you can stop losing, you need to learn how to win.