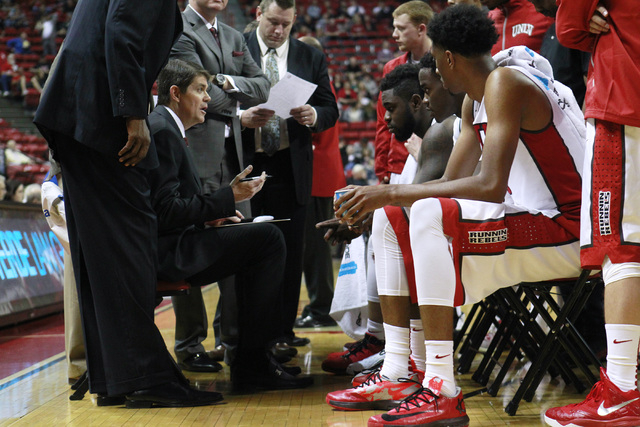 UNLV head coach Dave Rice likes the talks to his team during a time out in an exhibition game against Florida National University last year at the Thomas & Mack Center in Las Vegas. Proposed rule changes would not allow coaches to call timeouts during a live ball and would eliminate some other timeouts in an effort to increase the pace of play. (Sam Morris/Las Vegas Review-Journal) 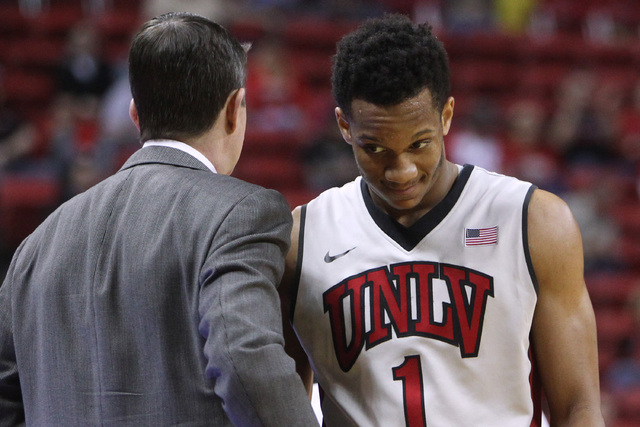 UNLV coach Dave Rice talks with Rashad Vaughn last season. A 30-second clock would benefit players such as Vaughn, who are capable of creating a shot at the end of a now faster clock. “More than anything, I believe a 30-second shot clock will make for a more exciting game,” Rice says. (Sam Morris/Las Vegas Review-Journal) 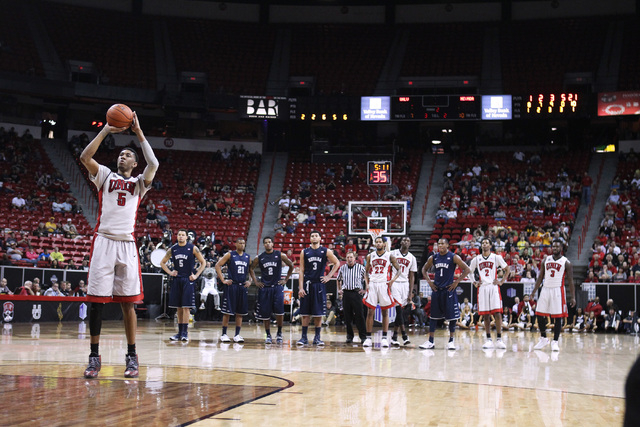 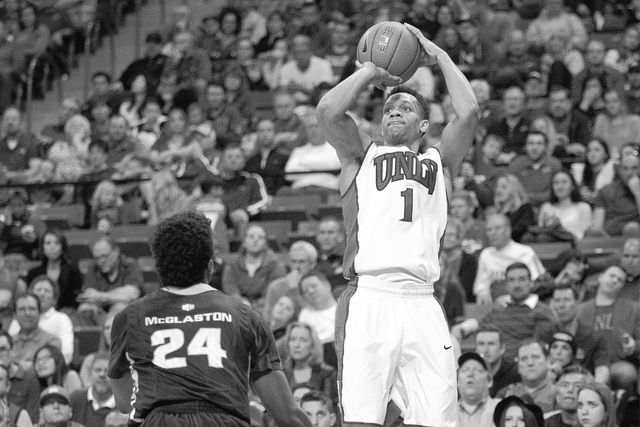 The NCAA men’s basketball rules committee has recommended a series of changes it believes will speed up the game and lessen physical play and produce more scoring.

My initial reaction: I sure wouldn’t want to be Cinderella right now.

My next reaction: College hoops is getting closer than ever to the NBA.

“The committee has taken significant steps to reverse the trends in the sport that are concerning,” said Rick Byrd, head coach at Belmont and chair of the rules committee. “Our anticipation is that this will help balance the offense and defense in our game.”

It’s going to take awhile — check back in mid-January — to fairly determine whether the changes a rules oversight committee is sure to approve in June have indeed helped improve things on the court and scoreboard or if this was just another example of coaches muddling up a still good but not necessarily great product.

What the majority of new rules will do, however, is make things much tougher for lesser-talented teams to upset bigger, faster, more athletic ones. Some of the madness might have just been erased from March.

■ Shot clock: It would go from 35 seconds to 30, but don’t instantly assume that would lead to better flow and offense. Good defensive teams could prove even better with soft pressure that would eat into an opponent’s 30 seconds before half-court sets begin, essentially forcing a lot of bad shots off a whole lot of ball screens once things creep under 10 seconds.

There is every chance you’re about to see more NBA offenses without a lot of NBA players running them.

“More than anything, I believe a 30-second shot clock will make for a more exciting game,” UNLV coach Dave Rice said. “I think 30 is a good number. It forces people to play faster. It puts more of a premium on preparation and skill.

“Absolutely, this wouldn’t be an advantage for a team that likes to hold onto the ball and take time off the clock.”

The rule should help Rice’s team, which on most nights is more athletic and talented than its opponent and more apt to have a player capable of creating a shot at the end of a now faster clock.

Translation: Rashad Vaughn could have really excelled in college next season.

It won’t help programs that favor a slower pace due to owning inferior talent, because more possessions for the better team usually isn’t a good thing for an underdog.

In other words, bet the favorite most nights.

Officials will again be instructed to stop the hand checks and body chucks and arm bars and treating screeners like they’re rag dolls meant to be tossed aside. Two years ago, whistles early in the season for such play led to nightly free-throw shooting contests and bored fans, so things got back to their rough and tumble ways by the time conference play began.

The hope is that whistles keep blowing this time around.

“Coaches and players will adjust over time,” Rice said. “I am for anything that will eventually allow us more freedom of movement.”

That’s good for UNLV and its athletes because it makes them harder to guard.

That’s bad for lesser players who can’t guard them without fouling.

■ Restricted-area arc: This makes sense, if for anything else officials probably won’t miss as many block-charge calls.

The arc beneath the basket will go from 3 feet to 4, allowing for more space and yet taking from a smaller team the ability to draw charges and shift momentum.

The rule was initially put in college basketball to reduce the number of collisions around the rim, and increasing that dotted line to 4 feet should limit those even more.

It will also make things easier for the bigger, stronger, better side to score.

There isn’t a more overcoached sport right now than college basketball, so by not allowing those in charge to call timeouts during a live ball, eliminating a timeout in the second half, and eliminating a scheduled media timeout if another is called by a team within the previous 30 seconds, will only help increase the pace of play.

It might lead to those in suits pulling their hair out one strand at a time for fear they can’t micromanage every last detail of every possession, but the game will be better with less coaching and players making more decisions within the flow of a game.

There are other new rules waiting to be ratified, including increasing the number of fouls allowed to six during the 2016 postseason, allowing officials to penalize players for faking fouls when reviewing a possible flagrant, eliminating the five-second closely guarded rule while dribbling, allowing players to dunk during warmups and making class B technicals such as hanging on the rim one-shot fouls instead of two.

Simply, the committee is reacting to what was a near-historic low in scoring average (67.6) last season, the second fewest amount of points scored in 50 years. That’s what a majority of these changes are about, trying to discover an easier path for more baskets.

“I do think we are going more towards an NBA and international style of play, and I think it’s good to move in that direction,” Rice said. “I’d like to see us go to four quarters, to six fouls all the time, to jump balls in the last two minutes of games and overtime instead of (alternating possession). More than anything, ours is a game of skill.”

These new rules should showcase that even more.

It’s good news for UNLV and other teams that recruit the highest level of athletes and talent.

Not so much for Cinderella.