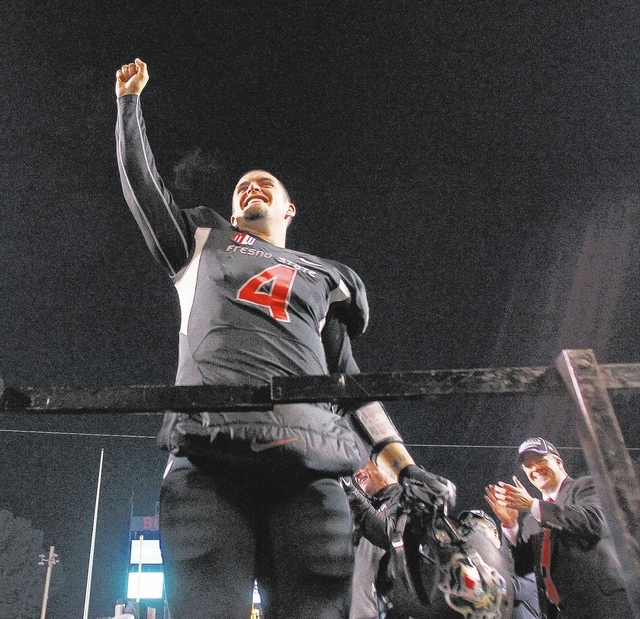 The NFL agent was talking about the inevitability of comparison between draft choices past and present, about how scouts and general managers might look down on a wide receiver from one school because others from it had failed, about how they might downgrade a linebacker because his was a college system that doesn’t always transfer successfully to the pros.

“And that’s not even players who are related,” the agent said. “With brothers who play quarterback, they might not do so consciously, but will certainly do so subconsciously.

Fair or not, Derek Carr will always be compared to older brother David.

Fresno State will be led for one final time today by Derek, a senior who hopes to manage the Bulldogs to a win against Southern California in the Las Vegas Bowl at Sam Boyd Stadium.

To know one brother is to understand the one who came before.

David Carr was drafted out of Fresno State in 2002 as the No. 1 overall pick by the expansion Texans, a forgettable tenure in Houston that was spent mostly on his back because of the ineptness of those instructed to protect him. Many will tell you he never had chance.

“How much of it was David and how much of it was the offensive line, I’m not totally sure,” the agent said. “But the line was awful. In this way, it might be better if (Derek) slips a little in the draft and goes to a more established, successful team, where he could sit and learn before becoming the face of a franchise.

“And yet Derek is better than his brother was.”

Here is what scouts are saying: That within the Fresno State offense, Carr has mastered bubble screens and slants and quick outs, that he hasn’t been forced to continually push the Bulldogs down the field with the sort of throws NFL general managers want to see, that his workouts between now and May will mean everything in terms of how high he can climb on draft boards. That he has high first-round ability and can secure such placement over the next five months.

He threw for over 4,800 yards and 48 touchdowns this season in an offense that averages 45.3 points, serious production from the most important position.

But he also knows that when doors close and evaluations begin, NFL personnel will at some point bring up a brother 12 years his senior.

“They can say anything they want — I’ve heard it all — but we are two totally different human beings,” Derek said. “It will never bother me. (David) taught me everything I know about playing quarterback. I’ll continue to listen to him and seek his advice my entire career, the rest of my life.

“He has always told me, ‘You’re going to get praised and you’re going to get criticized. Ignore both. Work hard and be as good as you can be because that’s all you can do.’ He was treated pretty badly by people (in Houston). I watched the game tape. He took all the blame, never said a thing, allowed everyone to put it on him. It wasn’t right. It wasn’t his fault.”

To know the younger brother is to know the strength he and wife Heather showed earlier this season.

The couple’s newborn son (Dallas) was rushed to the hospital Aug. 6, in need of emergency surgery to correct twisted intestines, which threatened to cut off blood flow. For 23 days, Carr shuttled between his football duties and a neonatal intensive care unit, between a game and life, between an escape and reality.

“I’m sure it was heart-wrenching to go through as parents,” Fresno State coach Tim DeRuyter said. “But he would show up each day with a smile on his face, ready to lead this team. A great kid. A mature kid. Whichever (NFL) team decides to take Derek is going to get a guy who does everything right on and off the field, in the community. He is as good a quarterback as I have ever been around.”

To know that quarterback is to know that no matter how much others compare him to another named Carr, it will never define how he views himself.

“Football is something I do,” Derek said. “It’s not who I am. What happened with my son made me stronger mentally, physically, spiritually. My wife and I grew from it in our faith and relationship with each other. I’m a better person for it, a better husband and father. I’m a better quarterback for it.”

Tough to compare that with anything.