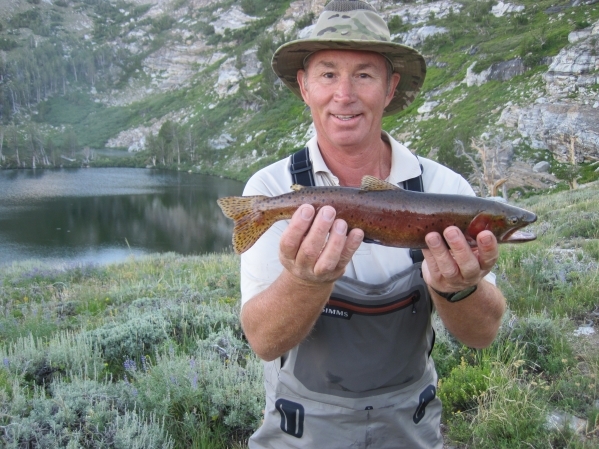 Almost 400 miles north of Las Vegas and just over the hill from Elko is one of Nevada’s natural treasures, a mountain range with 10 jagged peaks that climb past 10,000 feet in elevation. The highest tops out at 11,387 feet. Some call these mountains the Swiss Alps of Nevada, but their true name is the Ruby Mountains.

To longtime Nevadans, they are simply the Rubies.

Of the Rubies, Las Vegas resident Steve Linder said: “It literally takes your breath away. It is just breathtakingly beautiful. It’s like an Alpine oasis in the middle of a wasteland.”

Linder expressed those sentiments after returning from his first adventure in the Rubies, a guided fishing trip he purchased during the live auction at the Las Vegas Woods and Waters Club annual fundraising banquet this year. This group of outdoor enthusiasts has a unique slogan. “All we want to do is hunt and fish and talk about it.” And that is exactly what Linder and I did. He fished. Then we talked about it.

As a rule, Nevada’s sportsmen tend to think of the Rubies as a premier deer hunting destination, and rightly so. This mountain range is home to Nevada’s largest mule deer herd, but with more than two dozen alpine lakes and numerous trout-filled streams, it also is home to some excellent fishing. Just ask Linder.

His three-day fishing adventure began in Ruby Valley on the Krenka Ranch, home base to Hidden Lake Outfitters and one of Nevada’s Centennial Ranches. Its founder, John Krenka, arrived in Ruby Valley between 1865 and 1870. It was here that Linder and five of his fellow club members swung their legs over the saddle on their assigned horses and the group began its climb toward a place called Hidden Lake.

From his saddle, Linder looked at the Rubies and thought, “Oh, my gosh, we’re going to ride horses up that?”

Between the valley floor and the first pass at almost 11,000 feet, Linder counted 58 switchbacks along the trail, from which he could see far into the distance.

“You can see three, four or five mountain ranges over as you continue going up,” he said. “And we get to the top and it’s just this big grassy bowl.”

The group set up its main camp at Hidden Lake, where they fished for cutthroat trout.

“The fishing was heaven, as the fish were ravenous,” Linder said.

“The fish,” Linder said, “all had beautiful markings, multicolored spots, and orange fins and throats.”

The second day began with what only can be described as a ranch breakfast. Danny Riddle, the group’s guide, whipped up a batch of sausage, bacon and cheese scrambled eggs, fried potatoes with onions and sweet rolls. After breakfast, the anglers may have been full, but the fish were still hungry. By 9 a.m. Linder caught and released another 16 cutthroats. Among them was a fish with dark maroon and brown coloring. It was much larger than all the others.

“This one, he was taking drag. And I was like, ‘holy, moly.’ I had to tighten the drag up a little bit. I was using 2-pound test leader. It took me probably four or five minutes to get him in,” Linder said.

Linder’s big fish measured 15.5 inches in length and had a girth of 7.5 inches. It weighed in at 1 pound, 2 ounces and would earn him a Trophy Fish certificate from the Department of Wildlife.

Later that morning, Linder and company rode their horses to Robinson Lake and fished for brook trout that were equally cooperative. The key to success at both waters was a two-fly combination of a tan caddis fly followed by a black and white Adams.

Looking back on his Ruby Mountain adventure, Linder said: “I want to say it was like a bucket list item, but I never would have guessed it would be that good. I really never guessed it was going to be that incredible.”