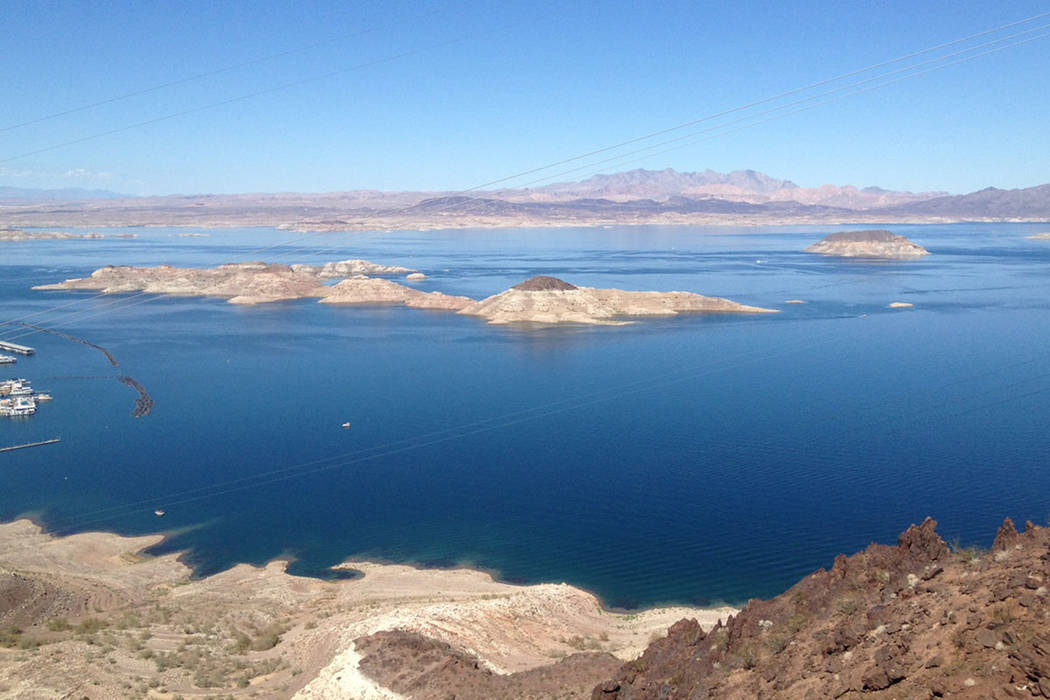 Fall is a great time of year to be outside in Southern Nevada. Temperatures are cool at night, mild in the day and those persistent summer winds are a thing of the past. If you are an angler who has been waiting to break out your fishing gear, now is the time.

Though Lake Mead’s surface acreage is much less than it once was, the reservoir is still one of America’s largest recreational waterways and fishing opportunity abounds. Available species include catfish, crappie, bluegill, sunfish and three species of bass – largemouth, smallmouth and striped.

While the reservoir is considered a challenging bass fishery, even by those at the pro level, the real struggle for shore anglers is finding a place to fish. Not because there is no access, but because the number of access roads is limited, which means you need to plan on sharing the shoreline with other anglers.

One of the more popular areas of the lake for shoreline anglers is the north shore of the Boulder Basin. That’s because it can be reached using five dirt roads that leave from Northshore Road.

The first of those roads leads to Gypsum Wash and leaves Northshore Road about 4.25 miles from the intersection of Northshore Road and Lake Shore Road, just north of the fee station. Historically, Gypsum Wash has been popular with striper and catfish anglers. But the low water level at Lake Mead has left the wash high and dry for more than a decade. Nevertheless, I would put this on your list just in case a water miracle happens.

Next in line is Government Wash. The turnoff is located at about mile marker 5.5, and the road is paved until you reach the parking lot above the old launch ramp. From there to the shoreline, the road is dirt and divides into multiple routes along the way. Some lead all the way to the water’s edge while others end much earlier.

Keep in mind that some roads are easily traveled using a passenger vehicle while for other routes a high-clearance vehicle with 4-wheel drive is a better choice. This is where good judgment and a knowledge of your equipment’s limitations come into play. When in doubt, park and walk.

Next on the list is 8.0 Road Cove. As the name implies, the turnoff is located near mile marker 8. This road leads to what is essentially the east side of Government Wash, but it divides into multiple secondary routes that lead to sundry points along the shoreline. This may be a location where a willingness to walk will take you to locations ignored by other fishermen.

During a day trip on Saturday, I found the road to Crawdad to be quite rough though passable. Much of the road was washboard with a teeth-rattling factor significant enough to justify using a low gear and crawling speed. That reflects the amount of vehicle traffic it has seen since it was last bladed by maintenance crews.

Where the road ends, there are locations to pitch a tent or park a small trailer. This isn’t the place for a large RV. There is nowhere to park along the water’s edge. So if you want to launch a kayak or canoe, be prepared to carry or drag it to your selected launch location.

Boxcar Cove also is a popular destination,and the road was in good condition on my recent trip. There was very little washboard, and along the way you will pass a concrete restroom that is now a mile from the shoreline. A stark reminder of the impact of uncontrolled growth and long-term drought in the West.

At the end of the road is a large, though not huge, flat area with room for a handful of tent campers and RV enthusiasts. Paddlers will find this location a good choice for launching their craft. But anglers may have to paddle for several minutes to get away from the crowd.