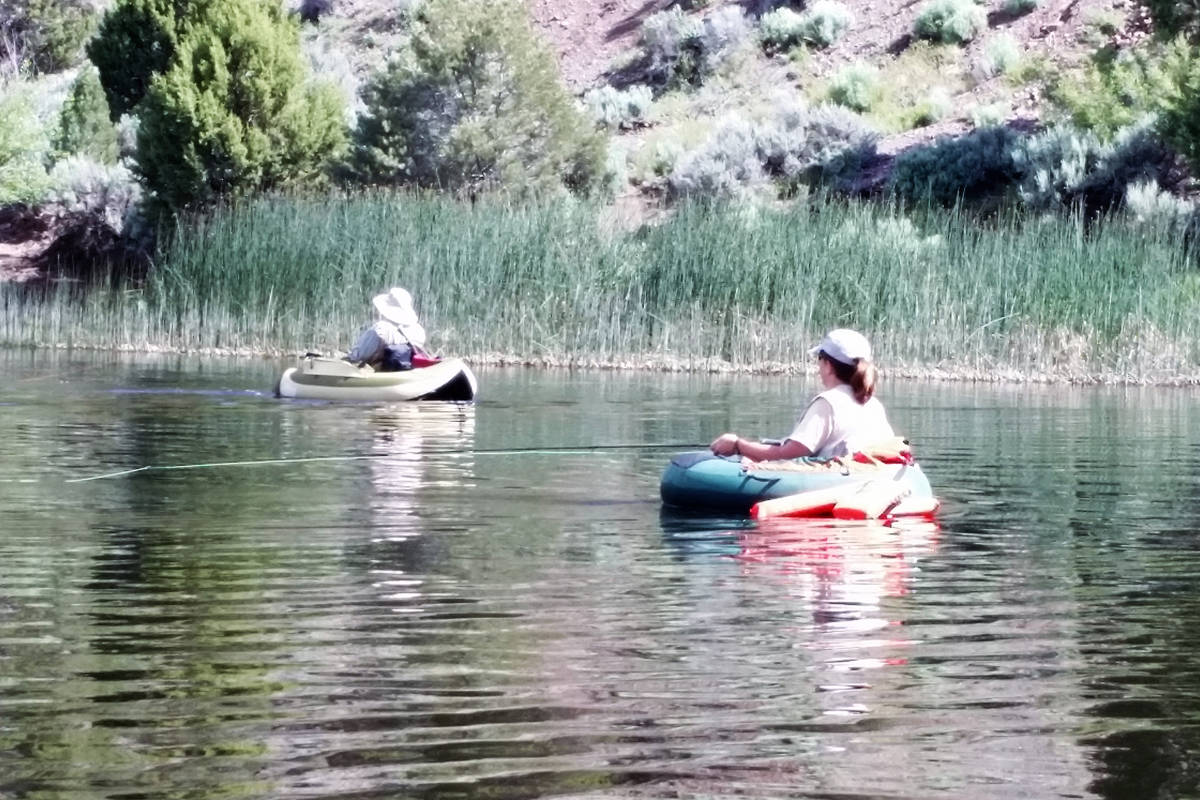 A pair of fly-fishers maintain safe fishtancing while float tubing at Eagle Valley Reservoir before fishtancing was a thing. (Doug Nielsen)

Though people in states across the country are living under some form of stay-at-home order as governors and other leaders try to curb the effects of the COVID-19 virus, those orders generally have left the door open to at least some forms of outdoor recreation, including fishing in most places.

Just what destinations are open and to what activities they are open is state dependent. There is no one-size-fits-all approach. So, should you be thinking about traveling to another state, be sure to verify which outdoor destinations are open to public access. In Utah, for example, the breadth of closures is determined by the individual counties and, where applicable, public land management agencies.

Here in Nevada, Section 6 of the stay-at-home order issued by Gov. Steve Sisolak — also known as Declaration of Emergency Directive 010 – reads, “This Directive does not prohibit individuals from engaging in outdoor activity, including without limitation, activities such as hiking, walking, or running, so long as the activity complies with all requirements of Emergency Directive 007, participants maintain at least 6 feet distancing from other individuals, and individuals do not congregate in groups beyond their household members.”

The requirements of Directive 007 reaffirm 6-foot social distancing and specify a limit on public gatherings to no more than 10 people whether you are indoors or outdoors. Included is a lengthy list of places where those limits apply that specifically includes such destinations as “rivers, lakes, beaches.”

Fishing obviously falls within the realm of outdoor activity, but anglers are expected to follow the same guidelines as everybody else.

In an April 14 news release, the Bass Fishing Hall of Fame reaffirmed the value of recreational fishing in helping Americans deal with the current health crisis, but urged anglers to be mindful of and follow COVID-19 precautions when fishing. That was partly to protect themselves and other fishermen and partly to protect fishing.

“As many anglers have shown, these pastimes can be enjoyed while practicing social distancing and adhering to other guidelines for stopping the spread of COVID-19,” said John Mazurkiewicz, president of the Hall of Fame Board of Directors. “Unfortunately, some outdoor enthusiasts have failed to follow those guidelines, and that has led to the closure of popular parks, recreation areas and even boat launches.”

The Nevada side of the Lake Mead National Recreation Area is one of those places. In response to such closures, the Hall of Fame has joined the American Sportfishing Association in promoting its #ResponsibleRecreation initiative, a campaign designed to encourage the public to fish local, stay safe and be flexible. In other words, fish close to home, practice physical distancing, wash your hands and avoid crowds by choosing a new location if needed.

To help its fishermen better understand how social distancing works, the Montana Department of Fish, Wildlife and Parks has taken its message to social media using the hashtag #Fishtancing. “If you do go out, please remember to recreate responsibly.”

That is followed by a colorful graphic that puts the message in terms all anglers should understand. The safe fishtancing distance is equal to the combined lengths of four trout, two shovelnose sturgeon measured end to end, one paddlefish or a single fishing rod.

One angler responded in a tweet, “For some of my friends it’s more like 12 trout. Probably just 3 for me.” Another said, “If I can see you, you are too close … come on this has been the rule forever …”

This last comment referred, of course, to the unwritten code of angling ethics and the standard of giving each other enough room to enjoy the resource. Given the nature of Nevada’s open terrain, we are going to see other anglers, but that does not mean we have to break the fishtancing barrier. Perhaps going forward, even when COVID-19 restrictions become a thing of the past, the idea of fishtancing should be the new standard.

Something else to keep in mind, if you do go out, is that many resources you have come to rely on, such as public restrooms, stores and campgrounds, are not currently available at most destinations. So, you should plan accordingly.