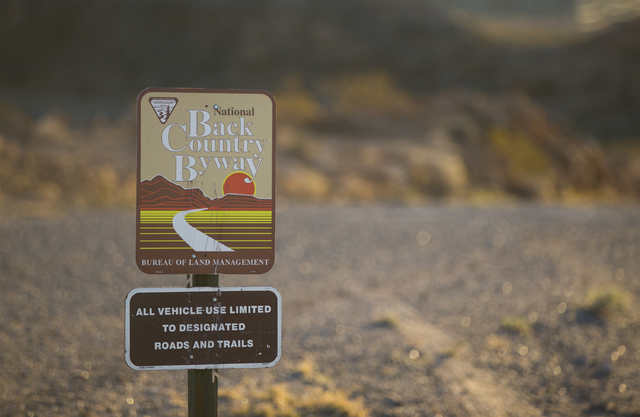 A Bureau of Land Management sign in the Gold Butte region south of Bunkerville on Wednesday, Dec. 28, 2016. President Obama signed a bill into law designating 300,000 acres in the region as a national monument. (Chase Stevens/Las Vegas Review-Journal) @csstevensphoto

On Dec. 28, outgoing President Barack Obama brought to a sudden end the ongoing argument about the future of a remote piece of Nevada real estate known as Gold Butte.

Citing his authority under the American Antiquities Act, Obama issued a proclamation designating 296,937 acres of federally managed public lands as the Gold Butte National Monument, to be managed by the Bureau of Land Management. The new monument lies south of Mesquite and is sandwiched between the Arizona-Nevada state line on the east, the Lake Mead National Recreation Area on the south and west, and the north slope of the Virgin Mountains on the north.

At the same time, Obama created the Bear’s Ears National Monument in Utah. Named for two distinctive buttes that resemble a bear’s ears, this monument encompasses 1.35 million acres. These monuments, according to a government release, will protect “sacred sites, spectacular scenery, and important natural and cultural resources in the desert landscapes of southeastern Utah and southern Nevada.”

In his proclamation, the president provided a rather extensive list of vulnerable natural, cultural and historical resources he said will be protected by the area’s designation as a national monument. Among those are multiple plant and wildlife species, including desert bighorn sheep and mountain lions. He also acknowledged that hunting long has been part of life in Gold Butte.

Early European explorers also hunted in this area, as did Mormon pioneers and miners who settled in Gold Butte, and that tradition has continued into the modern era. Every year hunters travel to Gold Butte in pursuit of Gambel’s quail, chukar partridge, bighorn sheep and even mule deer. Trappers also ply their trade, and anglers pass through on their way to remote corners of Lake Mead.

Today, however, sportsmen are wondering whether they will be able to continue to enjoy the hunting, camping and other outdoor opportunities Gold Butte has long offered visitors. They also are concerned about the future of wildlife water developments that have been installed in the last half century. I suppose it depends on how literally present and future land managers take the wording contained in the president’s proclamation.

“Nothing in this proclamation shall be deemed to enlarge or diminish the jurisdiction of the state of Nevada, including its jurisdiction and authority with respect to fish and wildlife management, including hunting and fishing.” Also, the proclamation states it doesn’t preclude the renewal, maintenance or replacement of “wildlife water catchments … that are located within the monument.”

And what about motorized travel? Can you still get there from here?

The proclamation states that “motorized travel use in the monument shall be permitted only on roads designated as open to such use as of the date of this proclamation unless the Secretary (of the Interior) decides to reroute roads for public safety purposes or to enhance protection of the objects identified” in the proclamation.

In a fact sheet issued by the BLM, the agency states “the designation preserves public access, such as for hunting and fishing, which continue to be managed by the state of Nevada. Traditional tribal collection of certain natural materials will still be allowed in the monument, as will access for other cultural uses. Visitors may continue to use motorized vehicles and nonmotorized mechanized vehicles (e.g. mountain bikes) on roads and trails designated as open for their use.”

So, what happens next?

The proclamation requires “the Secretary of the Interior, through the BLM, to prepare and maintain a management plan for monument and … provide for maximum public involvement in the development of that plan …” Part of that public input process will include the creation of an advisory committee “to provide information and advice regarding development of the land use plan and management of the monument.”

As part of the planning process, you can expect the BLM to hold public meetings at which you can provide input.

The Arizona Game and Fish Department is accepting paper applications for leftover javelina tags. Tags are available for the general, archery only and handgun, archery and muzzleloader seasons. The tags will be distributed on a first-come, first-served basis. The agency also is accepting applications for 2017 pronghorn antelope and elk tags.