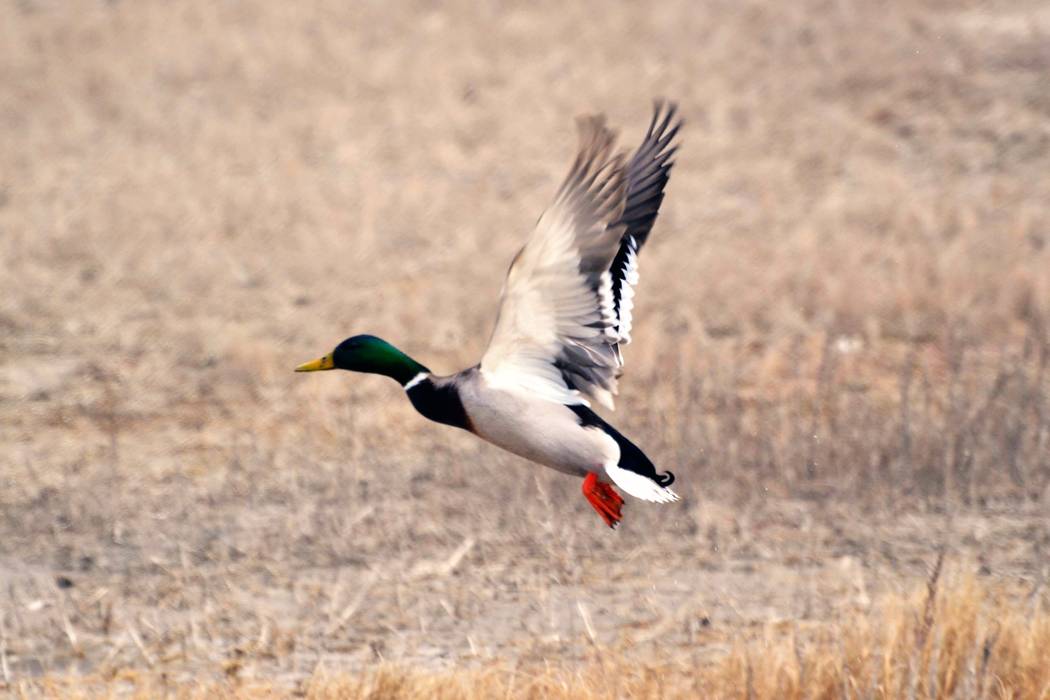 Numbering more than 9.4 million birds, mallards are the largest segment of the overall duck population and should provide good hunting opportunity as annual waterfowl season get underway around the west. This mallard drake is about to land in a field. (Rich Hansen, Utah Division of Wildlife)

As waterfowl hunting seasons begin in Nevada and across the U.S., hunters can expect to find the birds in numbers similar to those of 2018.

The total duck population was estimated at 38.9 million, according to the 2019 Waterfowl Breeding Population and Habitat Survey.

Though that number is 6 percent lower than the 2018 estimate of 41.2 million birds, it remains 10 percent higher than the long-term average, which has been documented annually since 1955. Credited with this reduction in bird numbers is a drier-than-average stretch between fall 2018 and spring 2019 in much of the Canadian prairies.

Along with the lack of precipitation, the prairies also experienced below average temperatures during the same time frame. While some areas experienced a warming trend in December and January, the report states that “…February 2019 was brutally cold across all of the Canadian Prairies.” Both conditions will influence waterfowl reproduction.

Mallards account for the largest segment of the waterfowl population at 9.4 million birds, a figure that represents a 2 percent increase over the 2018 count and is 19 percent higher than the long-term average. The Gadwall population climbed from 2.9 million birds to 3.26 million, an increase of 13 percent. That’s the largest positive change among the three species showing a population increase. The Gadwall population also is holding at 61 percent higher than the long-term average.

Green-winged Teal increased by 4 percent to 3.1 million birds, while Blue-winged teal decreased from 6.4 million birds to 5.4 million. Despite that drop, Blue-winged Teal numbers are holding at 6 percent higher than the long-term average. The largest decline of 27 percent was experienced by Redheads, but their numbers are managing to stay even with the long-term average. Their population is estimated at about 732,000 birds.

Population estimates from this annual survey and other monitoring activities are used by the U.S. Fish Wildlife Service to establish annual hunting season frameworks, which include windows for season lengths and bag limits. The FWS oversees this process because waterfowl are managed under international treaties and The Migratory Bird Treaty Act of 1918.

Nevada is one of 12 western states that comprise the Pacific Flyway Council. The others are Alaska, Arizona, California, Colorado, Idaho, Montana, New Mexico, Oregon, Utah, Washington and Wyoming.

While most of the changes in the framework for the 2019-2020 hunting season affect states in the east, two are reflected in Nevada’s migratory bird regulations. First is a daily bag limit of one bird for northern pintails nationwide. The second is a general season closing date that was previously designated as the last Sunday in January and is now set as Jan. 31.

The combined daily bag limit on all ducks is seven birds but must include no more than two hen mallards, two redheads, two canvasbacks, three scaup and one pintail.

Keep in mind that when hunting migratory waterfowl lead shot is out. Federal and state law require the use of nontoxic shot. The FWS service defines nontoxic shot as “any shot type that does not cause sickness and death when ingested by migratory birds.” Fourteen shot types are approved by the FWS as nontoxic. A complete list can be found at fws.gov/birds/bird-enthusiasts/hunting.php.