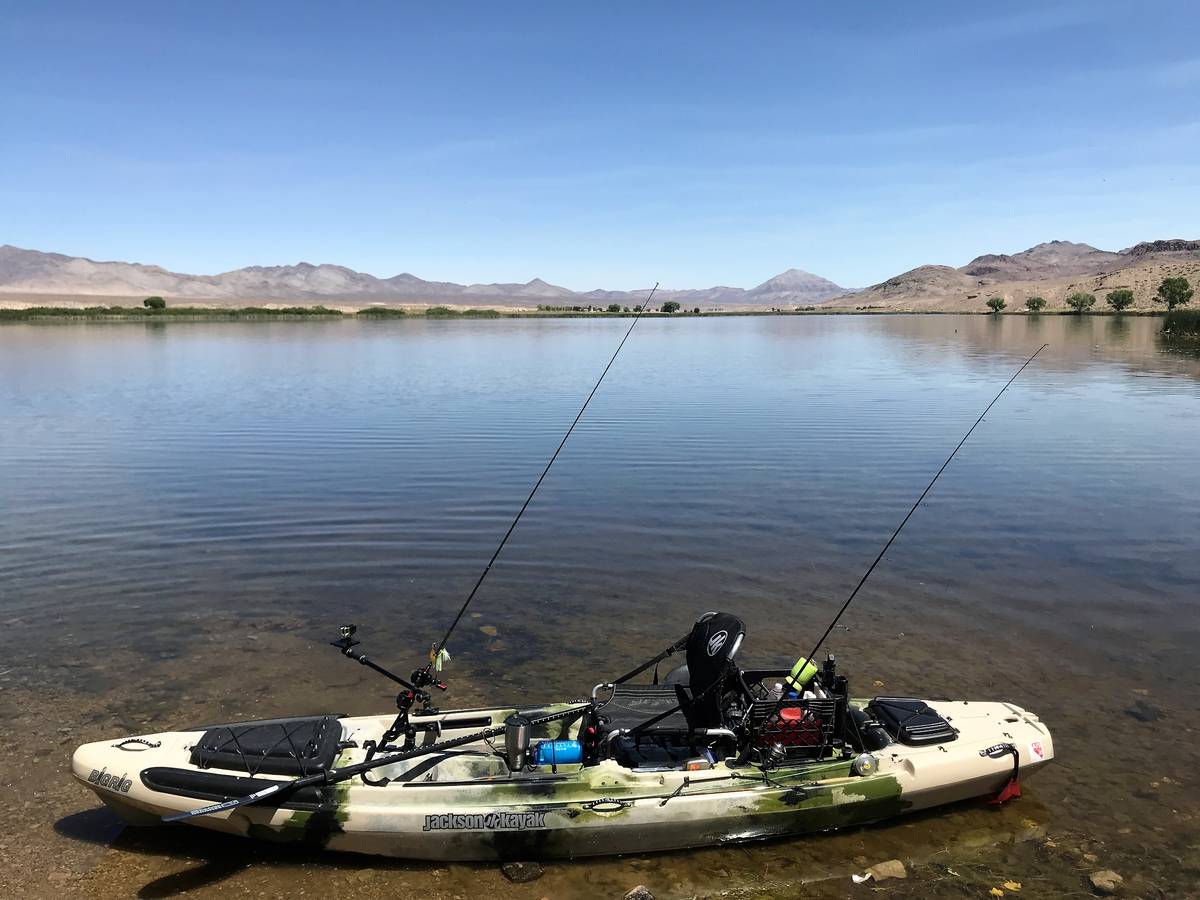 Getting set for a day of fishing at Nesbitt Lake, the centerpiece of the Key Pittman Wildlife Management Area. (Doug Nielsen)

Few things are more frustrating than being taught a lesson when you have the largest catch of the day on the end of your fishing line, unless it’s learning that lesson because you didn’t follow your own advice.

Thankfully, the sting can be taken out of a tough lesson when the classroom is a pleasurable place to spend the day. Nesbitt Lake is such a place.

Located along the western face of the Hiko Range in Lincoln County, Nesbitt is home to bluegill, white crappie, black bullhead catfish and largemouth bass. You will not catch anything large enough to qualify as a cover photo for an outdoor magazine, but spring fishing can still be worth the 110-mile trip from Las Vegas.

At approximately 200 acres, Nesbitt Lake is the centerpiece of the Key Pittman Wildlife Management Area and just the right size for exploring from a kayak, canoe or even a float tube.

For obvious reasons, a float tube will limit the water you can cover, but early in the spring you will not need to kick far to have a productive day. When the bluegill bite is on, an angler can wear out a well-tied fly.

The management area is closed to fishing during the waterfowl season, which fits well with the fishing calendar. The best action at Nesbitt Lake takes place from late February through early to mid-June. By the time June arrives, so has aquatic vegetation that grows thick and makes fishing difficult.

Such was the case on a recent outing to Nesbitt. After putting in near some tall cottonwoods at the south end of the lake, I paddled my kayak north along the western shoreline, casting a spinnerbait along the way. Those efforts proved fruitless because cast after cast brought in only green plant matter.

Thinking anything that worked below the waterline would be ineffective, I switched to a frog and began working the topwater. That too proved futile, so eventually I pulled out the fly rod.

Armed with the fly rod, I paddled along the tule beds until I finally found some open spots in the weeds and tossed in an olive-colored Woolly Bugger. My first cast was rewarded with a plump, scrappy bluegill that could not resist the fly.

Though I was hunting bass, the bluegill would do for a start. Soon I was catching a mix of small bass and bluegill in a small cove-like opening among the tules. Among them was a bass that weighed 1½ pounds. Not huge but typical for Nesbitt and fun to catch.

After an exceptionally feisty bluegill broke my line and stole my fly, it was time to replace my tippet as well as the fly. Using the spool I had stuffed into my life-jacket pocket before leaving home that morning, I was soon back in business. But I was also down to my last beadhead-free Woolly Bugger.

As the fly settled onto the water’s surface, it suddenly blew up with a splash. The largest bass of the day inhaled the Woolly Bugger and headed back for his weedy haunts. I set the hook and tried to turn the fish but found myself battling both the fish and the weeds.

Keeping tension on the line, the fish eventually came free. But just as he came alongside the kayak, the line suddenly went slack.

The fish splashed and disappeared. He had broken my “new” tippet off at the knot. It turns out the tippet material was older than I had thought. Had I followed my own advice to periodically check the condition of my line and replaced it seasonally, I would have brought that fish to hand.

It was a lesson relearned, but still a great day in the classroom.