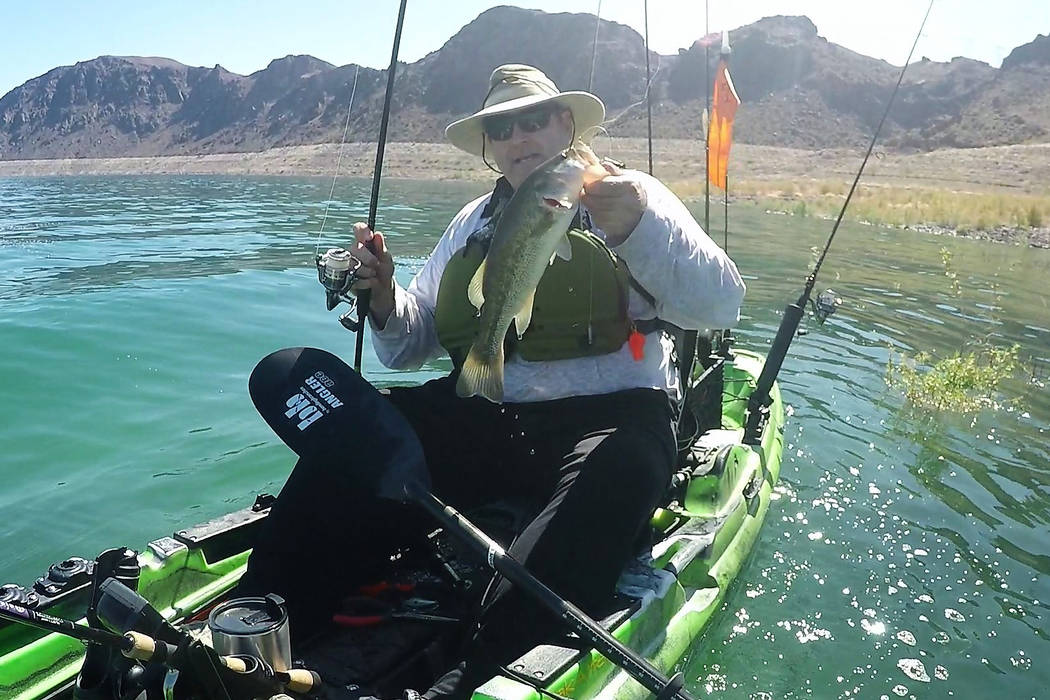 Persistence and a drop shot both paid off when this 2-pound largemouth bass left its hiding place in the shade beneath a tree to hit a blue and chartreuse swimbait. (Doug Nielsen) 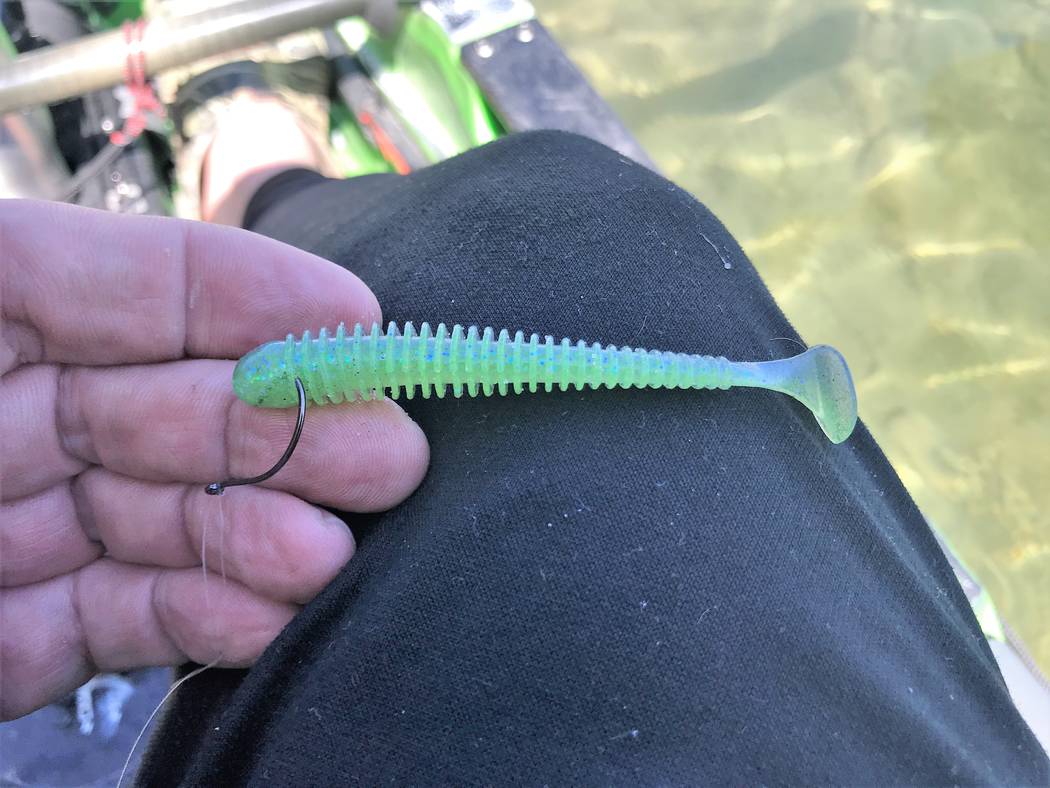 This blue and chartreuse swimbait by Keitech has proven to be an effective bait for largemouth bass at Lake Mead and Lake Mohave when fished on a drop shot rig. Hooking the bait without exposing the hook point seems to be key. (Doug Nielsen)

One of the enjoyable aspects of spending time in the outdoors is the opportunity to see things the average person hasn’t seen and maybe never will. This is true whether you are somewhere in the backcountry or on the water. Even at someplace as busy as Lake Mead on a holiday weekend.

When my friends and I launched our kayaks Saturday, we could see spots where striped bass troubled the water’s glassy surface with half-hearted attempts at boiling for threadfin shad. They were small and brief, but we hoped the boils were a sign of things to come.

Though we chased for an hour or so, we never found one that fully erupted and provided the topwater action we wanted. While that was disappointing, it was still early in the morning and there was plenty of time to switch our fishing gears.

As my friends worked their way east along the rocky shoreline, I turned my attention to smallmouth and largemouth bass and began working my way to the west.

Somewhere in my bass education, I came across a piece of advice that helped this former trout-only angler learn how to catch bass. Simply stated, that advice said to find bass one has to look for something different in the habitat, something that sticks out from the rest. That could be a rock formation, a drop-off, a point, flooded brush, the shade of a tree or a combination of these things.

Admittedly, I still have a long way to go as a bass angler, but that bit of guidance has proven itself time after time.

I began by searching boulder fields and drop-offs with a spinnerbait but found no takers, so I switched to a Ned Rig baited with a 3-inch worm in green pumpkin. On my first cast, a fish barely twice the size of the worm hit the bait as hard as he could. The fish put the small in smallmouth, and the fight was short, but he showed just how aggressive a smallie can be.

After a few empty casts, I switched to a drop shot rig and a Keitech swim bait in a blue and chartreuse color combination. That proved to be the right combination, and it soon brought in four more smallmouth bass. All came from the dark water on the shaded sides of rocky points and submerged shelves, but they weren’t deep. The largest fish was perhaps a pound or so, but the catching was still fun.

Then I saw one of those things that was a new experience for me.

Along the shoreline is a group of small trees that lean over the water and provide a large shaded spot filled with flooded brush. It’s one of those spots that is different from the rest. As I paddled toward the trees, the surface of the shaded water suddenly began to move in my direction. Something hungry was chasing something scared.

Thousands of bait-size fish shot past the kayak, moving almost as if they were one rather than many, but not in a leisurely manner. They were swimming for their lives, and a few seconds later I saw why.

Out of the shadows, a largemouth bass suddenly appeared with its big mouth open wide. It sucked in a mouthful of the small fish, and in a move reminiscent of a much larger predator, swung its head from one side to the other. Then it disappeared. A not-so-subtle reminder that things in the wild live by eating other things.

I wanted to catch that fish, but after a while, it became obvious that he wasn’t interested in taking anything I was throwing. Eventually I moved on, but I couldn’t stop thinking of that wide-open mouth as it closed on the fish that became its next meal.

When it came time to go home a couple of hours later, I just had to try that hungry bass one more time and paddled back to his lair. This time the swimbait was barely out of sight when my line went tight, and I set the hook.

Persistence and the drop shot paid off.