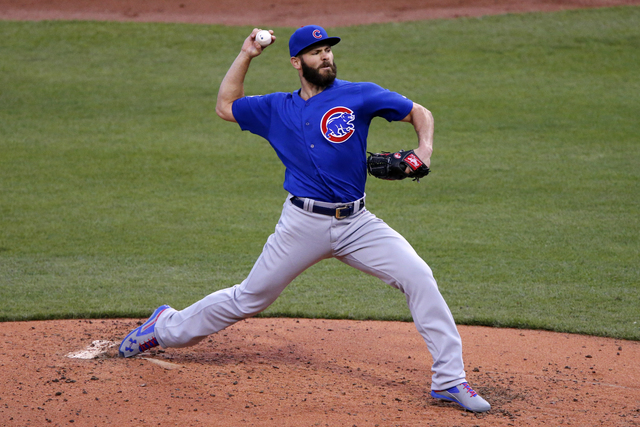 Chicago Cubs starting pitcher Jake Arrieta delivers during the third inning of a baseball game against the Pittsburgh Pirates in Pittsburgh, Tuesday, May 3, 2016. (Gene J. Puskar/AP)

It’s a catchphrase, but it’s accurate to call Joe Maddon an outside-the-box thinker. Maddon is the most creative manager in the major leagues, and he probably has more to work with than anyone else, which is part of the intrigue of the Chicago Cubs.

Inside the lines, the Cubs are the best team in baseball, and the wise guy peering over the dugout railing at Wrigley Field will pull all sorts of strings to make sure it stays that way throughout a long summer.

The Cubs are so popular with the betting public that Las Vegas bookmakers are forced to root against them.

That’s how often the public is getting behind the Cubs, who are consistently beating up bookmakers.

Andrews said, “It just can’t go on like this all season, can it?”

The Cubs actually lost home games Monday and Tuesday to the St. Louis Cardinals, so bookmakers like Andrews got a rare breather. Chicago still leads the majors at 47-22 with a plus-169 run differential.

In March, oddsmakers set the Cubs’ regular-season win total at 93, a number that looked low to most bettors.

On April 24, Andrews posted a proposition: Will the Cubs win 100 or more regular-season games? The “No” side was favored at minus-170.

“Before the season, I thought the Cubs were overvalued, but after about two weeks I changed my tune,” The Gold Sheet handicapper Bruce Marshall said. “Even if the bats go cold, their pitching is good enough. Their pitching is so solid, it precludes them from going on an extended slump. And Maddon is so good. He’s a move ahead of other managers.”

A lineup with power, speed and versatility should ensure the Cubs are crossing the plate on a frequent basis. First baseman Anthony Rizzo and third baseman Kris Bryant are tied for the team lead with 17 home runs. Bryant’s connection to Las Vegas makes the storyline even better in his hometown. The 24-year-old Bonanza High School graduate was the No. 2 pick in the draft three years ago.

Andrews recently took down his prop — which appears it will be a significant loser for the book — after the Cubs had become minus-190 favorites to win 100 or more games.

“I had to take it off the board,” Andrews said. “Nobody is going to bet the ‘No.’ It’s just unbelievable.”

In October, we will find out if the Cubs are still a year away. But for now, the betting public believes every day, or at least 90 percent of the time.