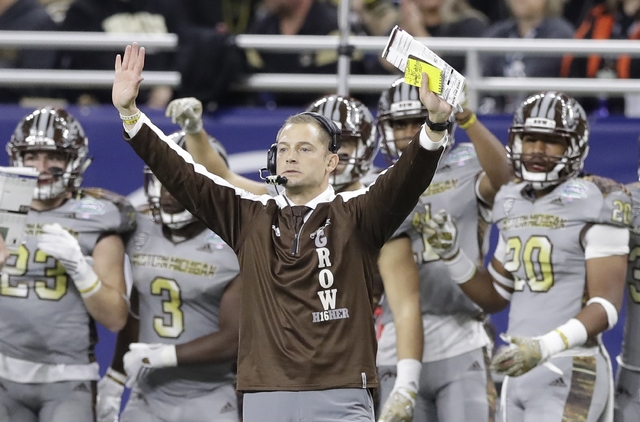 Unless the coaching carousel takes an unexpected turn, it appears P.J. Fleck will be staying at Western Michigan. A week ago, it appeared he was gone.

This is the craziest time of the college football season, even more insane than those weekends in October and November when big favorites were getting upset. This is when coaching changes and the bowl season intersect to create a handicapping Rubik’s Cube.

No bowl season ever has looked more bizarre than this one. Notre Dame is not in a bowl, there are nobowls on New Year’s Day, and Eastern Michigan is facing Old Dominion in the Bahamas Bowl. And there are many more oddities.

There are 40 bowl games — not counting something called the Celebration Bowl featuring a Grambling-North Carolina Central tussle and the national championship game, which is not called a bowl — and most of the early matchups are as dull as a brown suit and brown shoes.

“The bowl season is great,” William Hill sports book director Nick Bogdanovich said. “As bad as the game is, if it’s on TV and there’s a line on it, that’s good.”

Well said. Drop the argument about there being too many bowls. From a Las Vegas perspective, no bowl is meaningless when money is on the line. Bettors and bookmakers embrace the action, even if it’s Appalachian State playing Toledo on a Saturdayafternoon in Montgomery, Alabama.

ESPN is televising almost all of these games mostly because we bet on them, and ESPN now embraces betting. Without wagering, would anyone watch?

On a Friday night, Ohio will play Troy in the prestigious Dollar General Bowl. You will likely tune in and check the score because you picked a side in a bowl pool and have a few dollars riding on it.

It’s Christmas Eve and the in-laws are invading your home to gossip and rip other relatives behind their backs. Suddenly, the Hawaii Bowl grudge match between Middle Tennessee and Hawaii will be must-see TV and maybe worth a bet.

As for coaching changes, the most intriguing pre-Christmas matchup is in the Las Vegas Bowl, which pits Houston against San Diego State on Dec. 17, the opening day of the bowl onslaught. The Cougars lost their coach — Tom Herman left for Texas — yet they are favored by 3 to 3½ points.

Houston has the better quarterback in Greg Ward Jr. But the Aztecs, who won the weak Mountain West, have running back Donnel Pumphrey and figure to be more motivated. The more focused and motivated team typically wins the bowl game.

Bowls are often a riddle and difficult to handicap. There are always player injuries and suspensions. There are strange matchups in odd locales. There is a lot of time off between games for most teams.

There are several ways to lose bowl bets. Some of the mind-bending bad beats from recent years happened in bowls.

Matt Rhule is leaving Temple, which plays in the Military Bowl, to be Baylor’s coach. Willie Taggart is leaving South Florida, which plays in the Birmingham Bowl, for Oregon. Ed Orgeron’s first game as LSU’s permanent coach is against Louisville and quarterback Lamar Jackson, the Heisman Trophy favorite, in the Citrus Bowl.

Fleck is leading Western Michigan (13-0) against Wisconsin in the Cotton Bowl. The Badgers of the powerful Big Ten are favored by 7 to 7½ points.

“I feel strongly about very few of these bowls, but I have a strong opinion on this one,” said Bernie Fratto, an ESPN Radio host in Las Vegas. “While taking nothing away from Western Michigan and their fine season, they are stepping up in class. Way up. This will be the best defense the Broncos have seen all year.

“Wisconsin kept fast company this season but always managed to own the line of scrimmage. The Badgers will wear them down in the trenches and push them around as the game progresses, frustrating the Broncos and proving football is truly a game of attrition.”

Fleck will coach the Broncos unless Brian Kelly abruptly leaves Notre Dame and Fleck gets the call. At this point, that’s a long shot.

The Fighting Irish (4-8) are home for the holidays.

Meanwhile, in a bizarre turn of events, Arkansas State, Army, Idaho, Louisiana-Lafayette and Wake Forest will be in bowls.

For those who dare handicap these games, the South Point and William Hill sports books are offering bowl contests with small entry fees and potentially large payoffs.