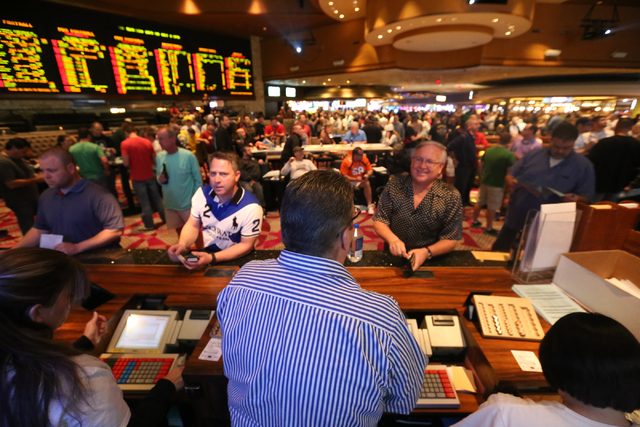 In the late 1970s, as Jimmy Vaccaro tells the story, there were times when ticket writers in Strip sports books would fall asleep behind the counter because there was so little action. And that was Super Bowl week.

Vaccaro has seen almost everything there is to see during four decades as a Las Vegas bookmaker. Still, he was blown away in February, and then blown away again in March.

From his spot behind the counter at the South Point sports book, he watched amusement park-like lines form at each open window. A month after the Super Bowl brought a crush of customers, the first four days of the NCAA Tournament did the same.

“The way things are trending, it’s possible,” Michael Lawton, senior research analyst for the Gaming Control Board, said of the $5 billion figure. “On a macro level, the sports betting industry in Nevada never has been stronger. There are a lot of moving parts contributing to what we’re seeing.”

“I’ve seen from studies around the world that the mobile app builds business, there’s no question about it,” said Michael “Roxy” Roxborough, an oddsmaker who founded and operated Las Vegas Sports Consultants from 1982 to 1999. “But there is no one set reason the handle is going up.”

The biggest events are booming. A record $132.5 million was wagered in the state on Super Bowl 50 — up from $98.9 million three years ago. College basketball was a spectacular draw, too, with the 67-game NCAA Tournament pulling in an estimated $200 million in March and April. A year ago, boxing’s megafight between Floyd Mayweather Jr. and Manny Pacquiao generated an estimated handle of $80 million in the state.

“Every single big event has gone up, with record-breaking handles every year,” said Matthew Holt, vice president of CG Technology sports books. “Las Vegas betting is stronger than ever. Ten years ago, nobody cared about betting in Las Vegas.”

Make no mistake, offshore books such as Pinnacle Sports in Curacao and BetCRIS in Costa Rica are still doing business on American soil, but the passage and enforcement of federal online anti-gambling laws have made it more difficult for the Average Joe to wager with a credit card in recent years. The Nevada handle of $2.4 billion in 1995 remained flat for more than a decade while offshore books owned the market.

Offshore and underground bookmakers still dominate the action, with an estimated $400 billion bet illegally on sports in the U.S. each year. But Nevada is gaining ground and significance, and a handle approaching $5 billion (with a win percentage in the 5.5 range) is no small thing to bookmakers and casino operators.

Advances in technology have helped the state catch up. CG Technology and William Hill sports books led the way with mobile phone apps that changed the game when introduced five years ago.

“People started to bet more because they could bet on their phone,” Holt said. “That made everyone else get an app, too, because they wanted to be competitive.”

At the South Point, Vaccaro said, around 100 customers signed up for the mobile app during the NCAA Tournament, and the book’s tournament handle was up about $1.2 million over 2015.

“You are seeing a majority of locals betting on phone apps, and they come to your casino to watch the games. You see them drinking Coronas all day,” Vaccaro said. “There is more access to everything, and I think the mobile app is the catalyst.”

On many days, Vaccaro said, 40 percent of what is wagered with the South Point comes in on phone accounts. The Westgate unveiled a phone app Jan. 19, and it has boosted the book’s handle instead of cannibalizing counter business.

“The mobile app is just so popular,” Westgate sports book director Jay Kornegay said “The counter handle has not suffered, either.”

It’s tough to find a book without a mobile app. MGM Resorts, one of the last to make an impression on the market, is set to roll out a phone app later this month. Even without it, book director Jay Rood said, “We’re ahead of last year on handle by 5 or 6 percent, so it continues to be strong.”

Kornegay, Rood and Vaccaro have appeared on ESPN “SportsCenter” spots in the past year, televised signs of increased mainstream media coverage in all forums. On any given day, Twitter is flooded with sports betting-related posts, helping to attract younger bettors. It adds up to free advertising.

“You go to these places for the Super Bowl and Final Four,” Roxborough said, “and it’s a very skewed demographic for people in their 20s.”

In the late 1990s, Roxborough said, casinos were plotting to downsize sports books. But that trend has reversed. The Westgate recently poured more than $12 million into the installation of state-of-the-art video boards and a renovated book, and Station Casinos spent millions on new video boards at Red Rock Resort.

Bookmakers all over the city are getting noticeably more aggressive in beefing up betting menus — even on baseball, golf, hockey and mixed martial arts — to create a more competitive market. State gaming laws are being loosened to help pump up the handle, with entity betting being one progressive example.

Last summer, Senate Bill 443 was signed into a law, authorizing business entities in Nevada to place wagers on behalf of investors from around the world. CG Technology executives lobbied lawmakers and worked with the Gaming Control Board to get the bill passed, and the entity concept is expected to flourish for football season in the fall.

“In the long run, it could revolutionize sports betting in the state,” Holt said. “It’s a way for people outside of the state to get involved.”

But there are simple theories, too.

“We have a pretty sports-passionate culture,” Lawton said.

Kornegay added, “Just the popularity of sports betting, the entertainment value is second to none.”

Times have changed in many eye-opening ways in the past five years, and, of course, since the ’70s.

“There are more women than I’ve ever seen, and they know the money line is different from the point spread. It’s a cheap date,” Vaccaro said. “The world is so (bleeped) up, this is a great relief for three hours.”