If you are having problems accessing today’s e-Edition, please click on this link VIEW E-EDITION
By Matt Youmans Las Vegas Review-Journal
February 10, 2016 - 11:24 am 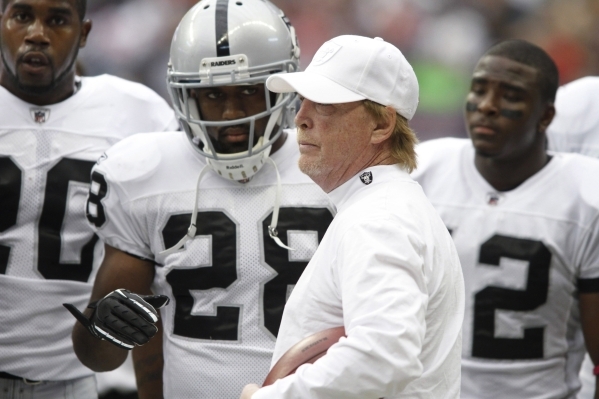 Mark Davis, third from left, stands near Raiders players before their NFL football game against the Houston Texans in Houston October 9, 2011. (Richard Carson/Reuters)

It’s a question NFL commissioner Roger Goodell dances around and does not want to entertain, but here it is: What are the odds on the Las Vegas Raiders becoming a reality?

Not everyone is laughing off the idea as a ridiculous long shot.

“A lot of people are talking 10-1 or 100-1, but I would make it much lower,” said Jimmy Vaccaro, a veteran Las Vegas oddsmaker. “It’s a lot closer to happening than we once thought. I have the lowest odds on the Raiders being here. It should be less than 10-1.”

Vaccaro is not planning to post the proposition bet at the South Point sports book. In Las Vegas, this is for entertainment purposes only.

The offshore prop was mentioned on Twitter, but it cannot be found as a betting option on the Bookmaker.eu website.

Vaccaro said he would make the odds 3-1 (“No” minus-300), yet the timeline is a significant issue, and the prop requires specific rules. Even if the Raiders announced they were relocating from Oakland — and it was approved by NFL owners — a stadium in Las Vegas would not be ready by 2018. A more likely timeline seems to be 2020.

Raiders owner Mark Davis toured the Strip on Jan. 29 to look at the site for a proposed $1.2 billion stadium on 42 acres near UNLV. He met with three powerful casino owners — Sheldon Adelson, Lorenzo Fertitta and Steve Wynn — during his visit. Davis obviously needs negotiating leverage to get a new stadium in the Bay Area, and Los Angeles is never out of the question for the Raiders.

Still, with legalized sports betting becoming more accepted and less taboo, Las Vegas is closer than ever to landing a major pro franchise. The NFL put a team in Jacksonville, Fla., for no apparent reason, and this market is far more appealing.

“I just think the time is now. I think it’s going to happen,” Vaccaro said. “Maybe it’s a little wishful thinking, too.”