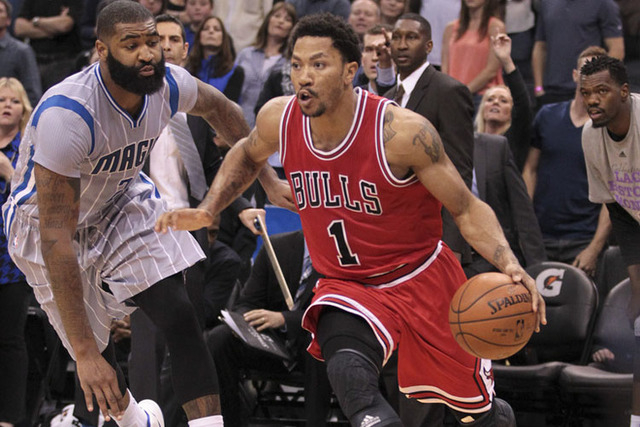 In his prime, before the first two knee injuries, Derrick Rose was a good bet to put the Chicago Bulls back on top. It was only a matter of time before he won a title, or so it seemed.

But three knee injuries are a reminder to never take good health, time or any bet for granted.

Rose, who is going in for surgery today on a torn medial meniscus, is already being talked about in the past tense, as in a player who could have been one of the great ones and could have led the Bulls to a title.

It’s also a reminder that a key injury can trash any futures ticket that seemed like a good idea at the time. The Bulls were a popular choice to win the NBA championship this season, but that all changed this week when pain in Rose’s right knee sent the 26-year-old point guard limping to the bench and looking broken down.

“It’s such a blow to that team,” said Jeff Sherman, oddsmaker at the Westgate Las Vegas sports book. “I don’t see the Bulls being a title contender without him.”

At the Westgate, Chicago’s odds dropped from 8-1 to 20-1. The adjustment would be more dramatic, but there remains a shot Rose could return for the playoffs. The truth is the Bulls are a long shot either way.

The first two injuries, one to his left knee and one to his right, changed Rose. He no longer played with no fear, lacking the same acceleration and confidence. Before the injuries, he was Elvis. After the injuries, he kind of resembled one of those fat Elvis impersonators.

In his past three games, Rose shot 8 of 34 from the field and twice failed to score in double figures. For the season, he was hitting just 28.7 percent from 3-point range.

“When he was one of the three or four best players in the league, he was young and explosive and nobody could stop him,” William Hill sports book director Nick Bogdanovich said. “He doesn’t have that blow-by speed anymore. He’s a scorer, but he’s not a shooter.”

At William Hill books, where the Bulls are the second-most popular team on the futures board in tickets written, their odds plummeted to 30-1 this week, the sign of a team being written off.

“It wasn’t like Rose was carrying the team or anything,” Bogdanovich said, “but it probably eliminates them from serious contention.”

Chicago, 36-22 and fourth in the Eastern Conference, is more than capable of winning a playoff series without Rose. But the Bulls won’t get by Atlanta or Cleveland without him.

Jimmy Butler had become the Bulls’ most valuable player even when Rose was healthy, yet Rose’s presence made Butler better. Aaron Brooks is a respectable replacement for Rose, yet Brooks is not going to outplay the Cavaliers’ Kyrie Irving in a playoff series.

Chicago’s front line — Pau Gasol, Joakim Noah and Taj Gibson — is stronger than most in the East, its bench is deep and Tom Thibodeau is a tough, underappreciated coach. The Bulls still can win a playoff series, but that’s probably their ceiling, with or without Rose returning.

“Rose has been off and on and not the same player,” Sherman said. “I can’t imagine he can come back and be mentally ready for the playoffs.”

When the favorites to reach the NBA Finals — Cleveland (5-2) and Golden State (4-1) — met Thursday, LeBron James made it a statement game, if a win in February can be a statement. This is fact: The Cavaliers own the NBA’s best record (18-3) since James returned from injury Jan. 13.

James scored 42 points and Irving 24 as Cleveland, a 3½-point home favorite, outran the Warriors 110-99. Obviously, it could be a different story if the teams meet in a long series in June.

Golden State is the most popular team on William Hill’s futures board “by a mile,” Bogdanovich said. Stephen Curry is a phenomenal shooter. He leads a fun team to watch that is no fluke.

The Warriors, however, must survive the wild West. With the Bulls all but out of the way, the road through the East will be mild by comparison.

James is an unstoppable force, and it now seems far more likely that he can put the Cavaliers on top.

CLOSING NUMBERS — The best game on Saturday’s college basketball schedule is No. 7 Arizona at No. 13 Utah, and it’s also a game I’ll bet.

Bogdanovich projected the line to be pick’em. It’s a revenge spot for the Utes, who have won 17 straight at the Huntsman Center in Salt Lake City. I’ll back Utah, a great defensive team with good guards and size, even as a slight favorite.