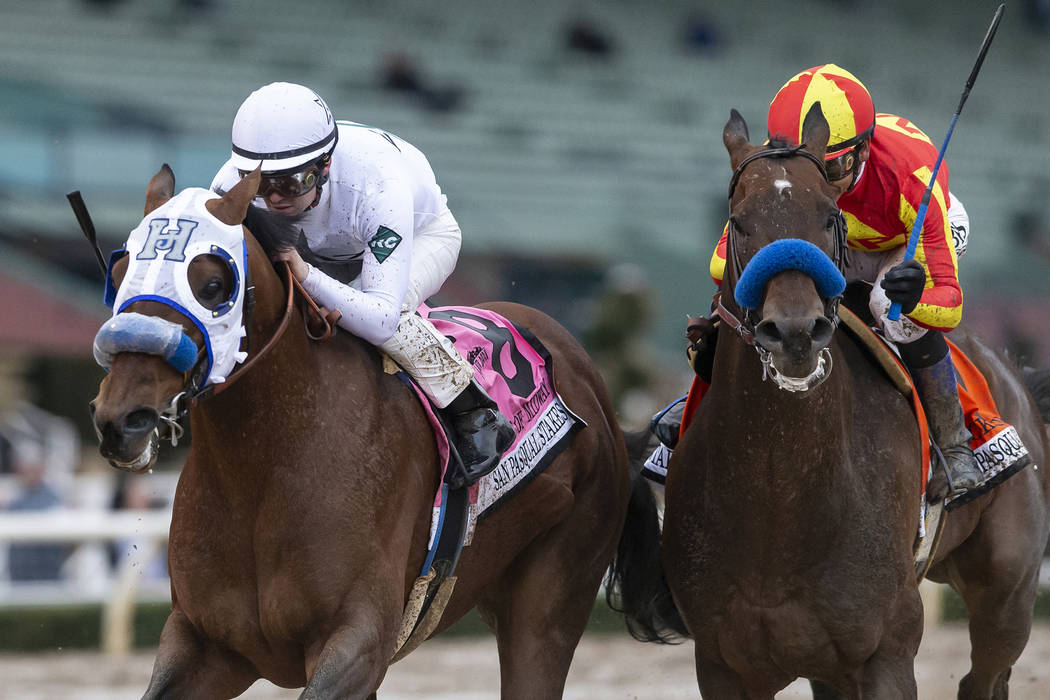 With less than a month to go until the Breeders’ Cup championship races, it’s time to start getting up to speed on the 14 divisional contests that will be run at Santa Anita Park on Nov. 1-2. And there’s a lot to catch up on.

The big news of the week was undoubtedly word that trainer Bob Baffert had informed Hall of Fame rider Mike Smith that his services would no longer be required aboard McKinzie, who may be the favorite in the $6 million Classic.

Smith, who has ridden McKinzie in all 13 of his career starts, including his second-place finish in the Awesome Again Stakes last weekend at Santa Anita, will be replaced by a rider yet to be determined.

“I’m still going to use Mike on horses,” Baffert told the Daily Racing Form’s Jay Privman. “But for the Classic, I’m going to make a change. I let Mike know now, because I want to give him a chance to get something else.”

It’s shocking to see Baffert and/or the 4-year-old’s owners – Mike Pegram, Karl Watson and Paul Weitman – dump a rider who has won nearly 5,500 races, but with just two wins and four seconds this year under Smith they apparently decided that a new rider might “wake up” the horse.

It’s definitely a classic case of “what have you done for me lately?” as Smith guided Baffert’s Justify through his Triple Crown winning campaign in 2018.

Some other Breeders’ Cup-related tidbits to chew on:

— Bricks and Mortar, winner of six straight turf races and leader of the National Thoroughbred Racing Association’s weekly Top Thoroughbred Poll for much of the year, is likely headed for the $2 million Mile rather than the $4 million Turf. Trainer Chad Brown told the DRF that the fact that the 5-year-old is coming off a nearly three-month layoff and concerns about his ability to navigate the 1 ½ mile distance of the Turf have him thinking that way.

— The DRF also reported that trainer Bill Mott is “leaning toward” running the top mare Elate in the Classic. Elate, who is entered in the Spinster Stakes on Sunday at Keeneland, already has earned passage to the Distaff via a “Win and You’re In” victory in the Fleur de Lis Stakes in June at Churchill Downs. But Mott, who generally takes a conservative approach with his top horses, said the Classic remains a possibility for the 5-year-old daughter of Medaglio d’Oro. Mott also has the males Tacitus and Yoshida under consideration for the Classic.

— Defending two-time Sprint champion Roy H will not make the race this year, but don’t count him out for next year, trainer Peter Miller said this week. “It was really just a matter of running out of time and doing the right thing,” Miller, who trains the 7-year-old son of More Than Ready, told HorseRacingNation.com. “… We just decided to pull the plug on this year, but next year’s still in the running.”

— While Hall of Fame trainer Shug McGaughey indicated that Code of Honor was likely headed for a vacation after winning the “Win and You’re In” Jockey Club Gold Cup last weekend at Belmont Park, he quickly reconsidered. On Wednesday, McGaughey said the 3-year-old colt is being pointed for the Classic and will retain the services of another Hall of Famer, jockey John Velazquez. He also opined that the likely 3-year-old champion should be part of the Horse of the Year conversation if he wins the Classic.

Congratuations to #RJhorseracing handicapper Robert Ranfone for triumphing in the #RJhorseracing Summer Classic handicapping contest and collecting the top prize: a copy of “The Lucky Thirteen: The Winner’s of America’s Triple Crown of Horse Racing,” by historian Jim Bolus.

We’ll be starting a new handicapping contest later this month, and will have a special Breeders’ Cup event as well, so now’s a great time to join the gang for some friendly competition as we solve the toughest racing puzzles we can find each week.